Accessibility links
As Spain's Immigration Rises, More Women Arrive With Experiences Of Sex Abuse Experts say nearly every woman migrating to Spain from Africa is sexually abused along the way. They sometimes arrive pregnant or with infants conceived on their journey, often a result of rape. 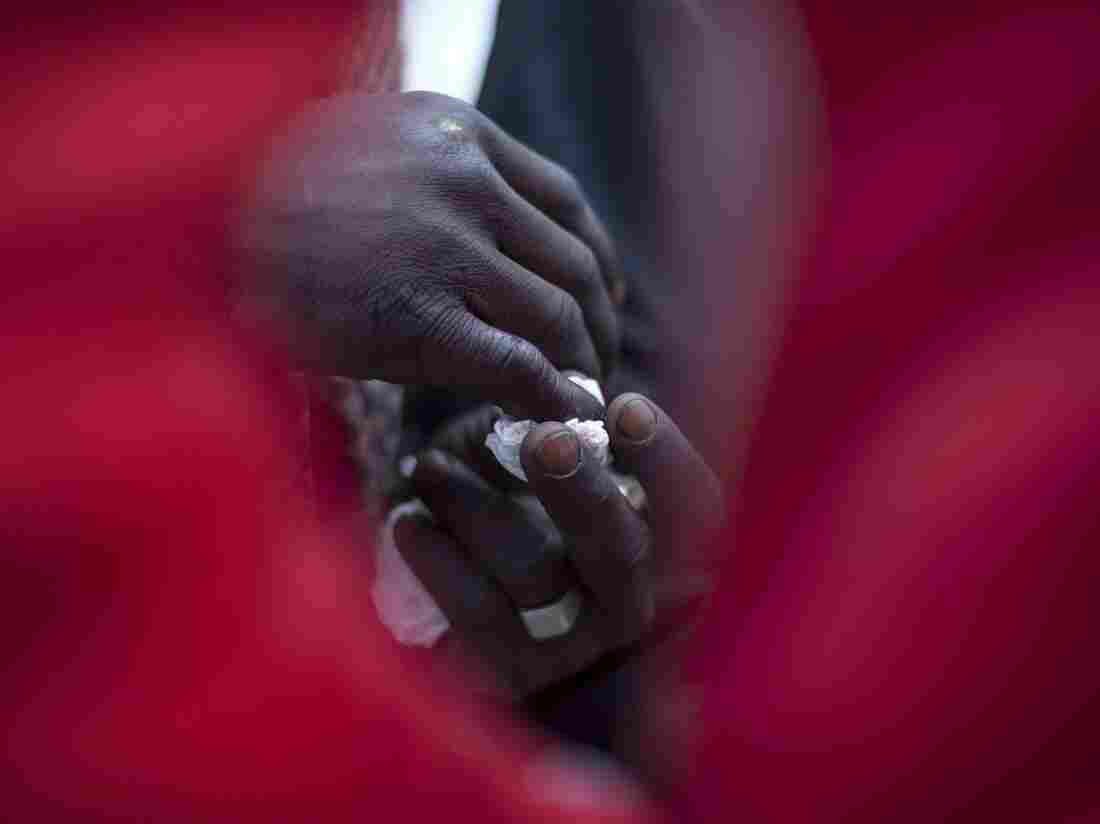 A migrant who scaled a border fence from Morocco into the Spanish enclave of Melilla shows their injured hands, in March 2014. Spain is seeing a record of largely sub-Saharan African migrants and asylum-seekers making risky journeys to enter the country. AFP/Getty Images hide caption 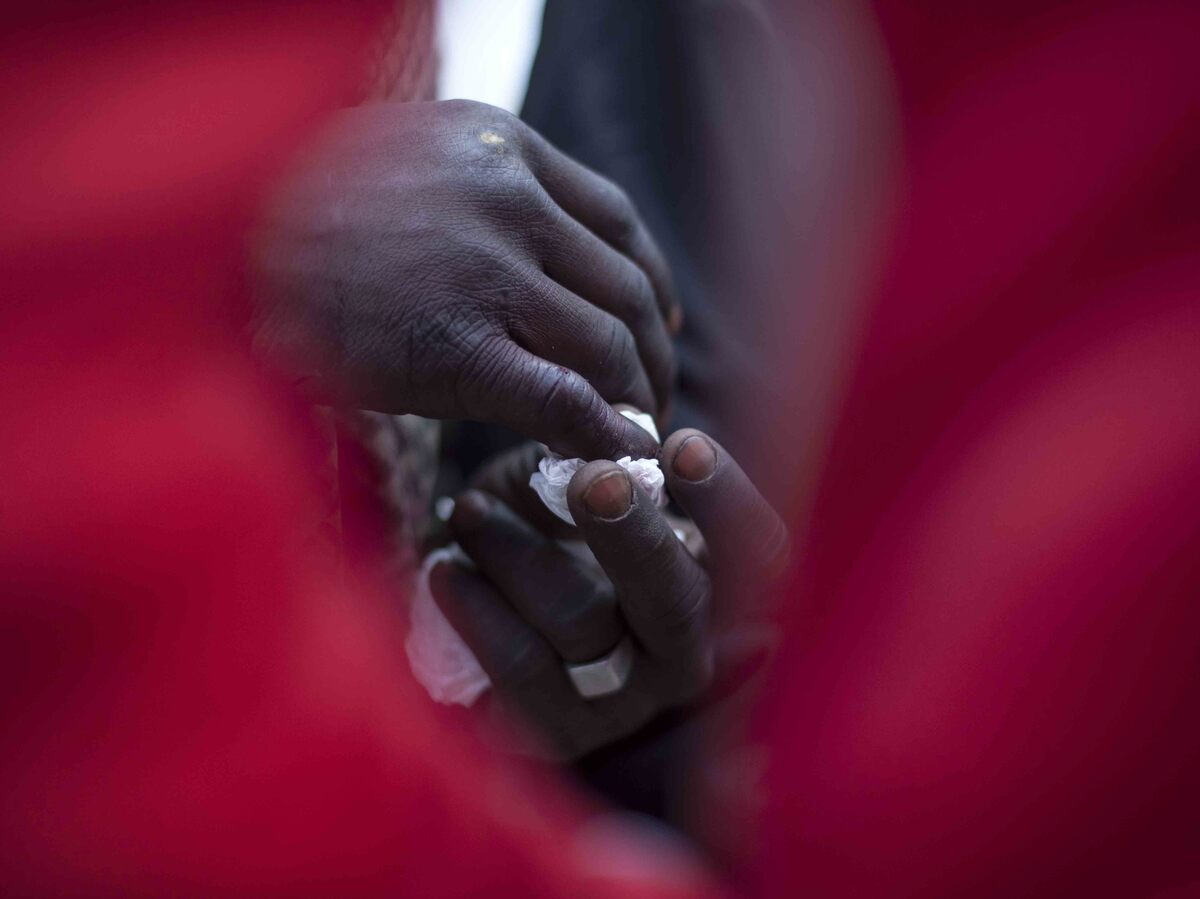 A migrant who scaled a border fence from Morocco into the Spanish enclave of Melilla shows their injured hands, in March 2014. Spain is seeing a record of largely sub-Saharan African migrants and asylum-seekers making risky journeys to enter the country.

Barcelona's boardwalk is lined with migrants selling knock-off purses, off-brand tennis shoes and soccer jerseys on blankets. Most are sub-Saharan African men, yet there are a few groups of women selling jewelry or offering to braid people's hair. They huddle together, away from the men, and don't interact much with the tourists walking past.

At one point, a sub-Saharan woman comes by with a bag overloaded with plastic containers falling out. Two of the street sellers call her over — she pulls out a disposable plate with rice, then pours sauces and spices on top of it. After the men pay her, she walks just a few feet before another group of hawkers — known in Spain as manteros, for the manta or "blanket" they place their merchandise on — get her attention, and she stops again.

"What women have started doing recently is making money feeding manteros typical African food," says Rose Mirène Mouansie Mapiemfou, 44, who migrated to Spain from Cameroon in 2001. "They walk around with their carts during lunch time."

Mapiemfou says that while it's difficult for undocumented migrants to find work in Spain, it's even harder for the women who arrive. It's the female migrants, she adds, that hold up the migrant community. 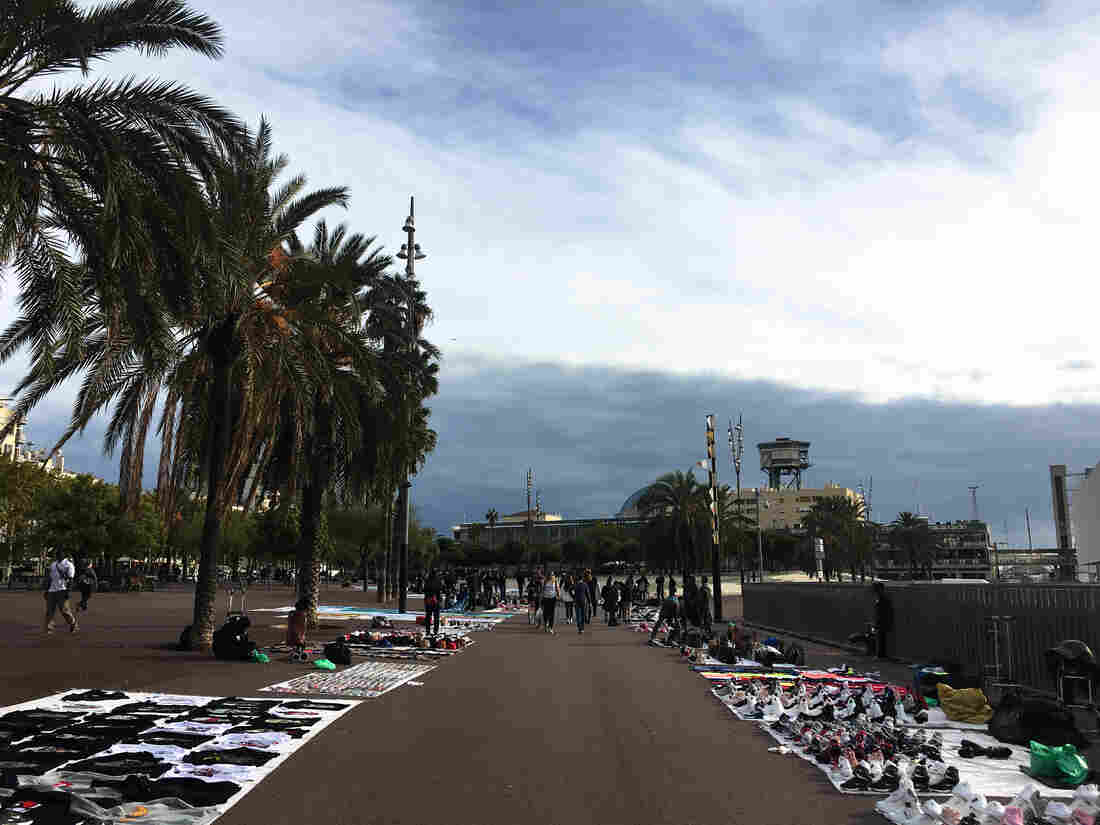 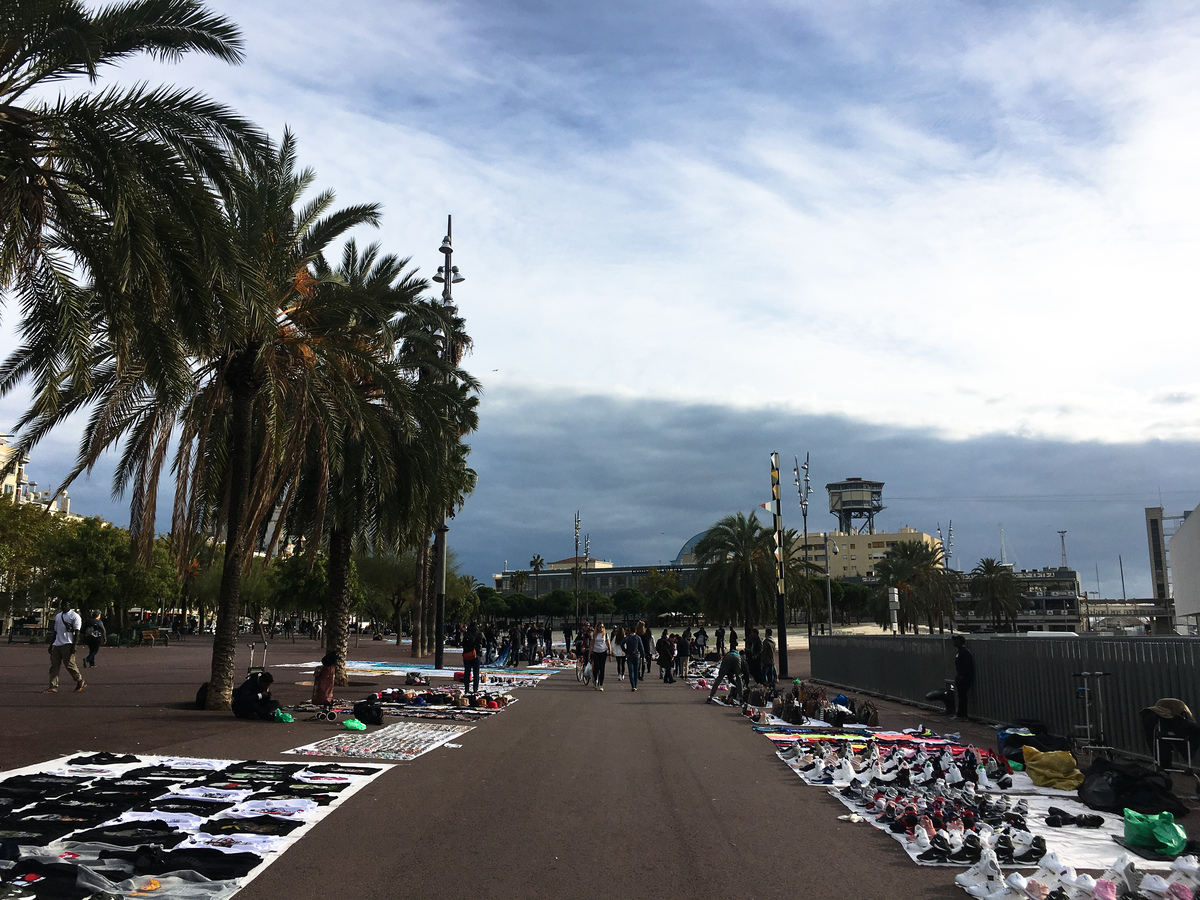 Crossings from Africa to Spain increased significantly this year, making up almost half of all irregular migrant arrivals into Europe. The numbers have been rising each month, even as temperatures drop and sea crossings become more dangerous. As of Oct. 28, the last figures available, there were 10,324 arrivals that month — the highest this year so far.

And 10 percent of those who cross are women, according to the International Organization for Migration. Immigration lawyers and activists say nearly every woman who makes the journey to Spain is sexually abused along the way – sometimes they come through sex trafficking mafias, who facilitate the crossing in return for a debt of tens of thousands of dollars. Women sometimes arrive pregnant or with infants conceived on their journey, often a result of rape.

Mapiemfou is an exception. She came to Barcelona with a temporary visa 17 years ago, which then turned into a residency permit, and eventually led to citizenship. Today, Spain grants fewer tourist and student visas given to people from African countries — so one of the only options left is to arrive by boat.

"I was an economic migrant, just like a lot of the people arriving in dinghies today," says Mapiemfou. "But I can tell you, there's not much difference between those who have papers and those who don't."

She says that being a black female migrant in Spain means fighting two battles: racism and sexism. There are certain parts of town she says she can't go to during specific times of the day. Last time she went to the touristy street of Las Ramblas after nightfall — a place known for prostitution — a Spanish man came up to her and asked her how much she charged.

"I was outraged. I can't sit in parks, or walk down the street without someone harassing me," Mapiemfou says. "We exist, and we're not all sex workers, and we didn't all arrive by boat."

Gema Fernández, an immigration lawyer for the nonprofit Women's Link, says female migrants have been made invisible to the public eye.

"All the attention when it comes to immigration is placed on the male experience," says Fernández. "So we wanted to ask: How are women arriving? What happened during their journey? And when they arrive, where do they go?"

Fernández found that a lot of women who crossed from Africa without papers work in the private sphere, doing things like domestic work, agricultural work and, most often, sex work. These types of jobs, Fernández adds, puts them in an even more vulnerable situation than they were already in by being undocumented.

As Others Slam The Door, Spain's New Government Opens Arms To Migrant Ships

As Others Slam The Door, Spain's New Government Opens Arms To Migrant Ships

"Every migrant goes through hardships, but the hardships for women are sexualized," Fernández says. Throughout their journey, if they need to make more money, "men can take up odd jobs, but women have to get into sex work or borrow money in exchange for sexual favors."

Women's reasons for migrating are often different from men's, she adds. They generally flee gender-related violence, such as forced marriages or female genital mutilation. Other times, they're looking for better education and work opportunities than they can find as women in their home countries. They hope that in Spain — or in Europe in general — they'll be able to lead a more autonomous life.

Yet that's not always the case, says Fernández.

"Women can fall into sex trafficking if they've racked up a debt," she says. "Whether it happens along the way or once they're already in Spain."

Áliva Díez, coordinator at the nonprofit Spanish Commission for Refugees in Madrid, says a lot of women who come through the organization were already victims of trafficking when they arrived. This year, the group has not only seen an increase of arrivals in Spain's southern shores, but an increase of female migrants as well.

"[Sex trafficking] is a phenomenon that's very difficult to measure. The cases we see are just the tip of the iceberg," Díez says. "When [migrants] arrive, they first go through the national police, and there's rarely a calm moment where we can sit down with each woman and get her full story. And they're so tired after the sea crossing, that it's very difficult to identify a possible victim. There are many cases that are completely missed by authorities."

Women who migrant from sub-Saharan countries such as Nigeria, Guinea and Ivory Coast may spend months, sometimes years, making their way to Europe. Díez says they sometimes have "journey husbands" who protect them from other men, in exchange for having unlimited access to the woman whenever he wants.

"Many of them have been subjected to sexual abuse and when they arrive, on top of mental and psychosocial trauma, their bodies begin to process the wounds suffered throughout their journey," Díez says. "They face triple discrimination: being an immigrant, being a woman, and being poor, with few possibilities to move forward."

When Mapiemfou left Cameroon as a 26-year-old, she was looking for better work opportunities. The situation in her home country was worsening, and the privatization of resources — including potable water — was making it more difficult to make ends meet.

"So why wouldn't young people want to migrate?" she asks.

Despite having papers, Mapiemfou says that finding work and renting an apartment as a black immigrant woman was extremely difficult. Nearly every job or apartment she nailed down was thanks to a friend or found through social networks.

But she was fortunate to get a visa, she adds. Many undocumented women in her community prefer to get into sex work because they say it's easier and they make more money.

"Having resources available doesn't mean that people will take advantage of them. There's barely any information available for women to know their rights," says Mapiemfou. "Barcelona makes itself out to be a welcoming city, Spain wants to paint itself as a welcoming country. But I'm not too convinced."

In a previous version of this story, we referred to plastic containers as Tupperware, but it is not actually known whether the containers were that brand.