Accessibility links
U.S. Is About To Reinstate Iran Sanctions. Here's What That Means Come Monday, the Trump administration plans to restore the full measure of sanctions that were lifted with the Iran nuclear deal. You probably have questions about the situation. We have answers. 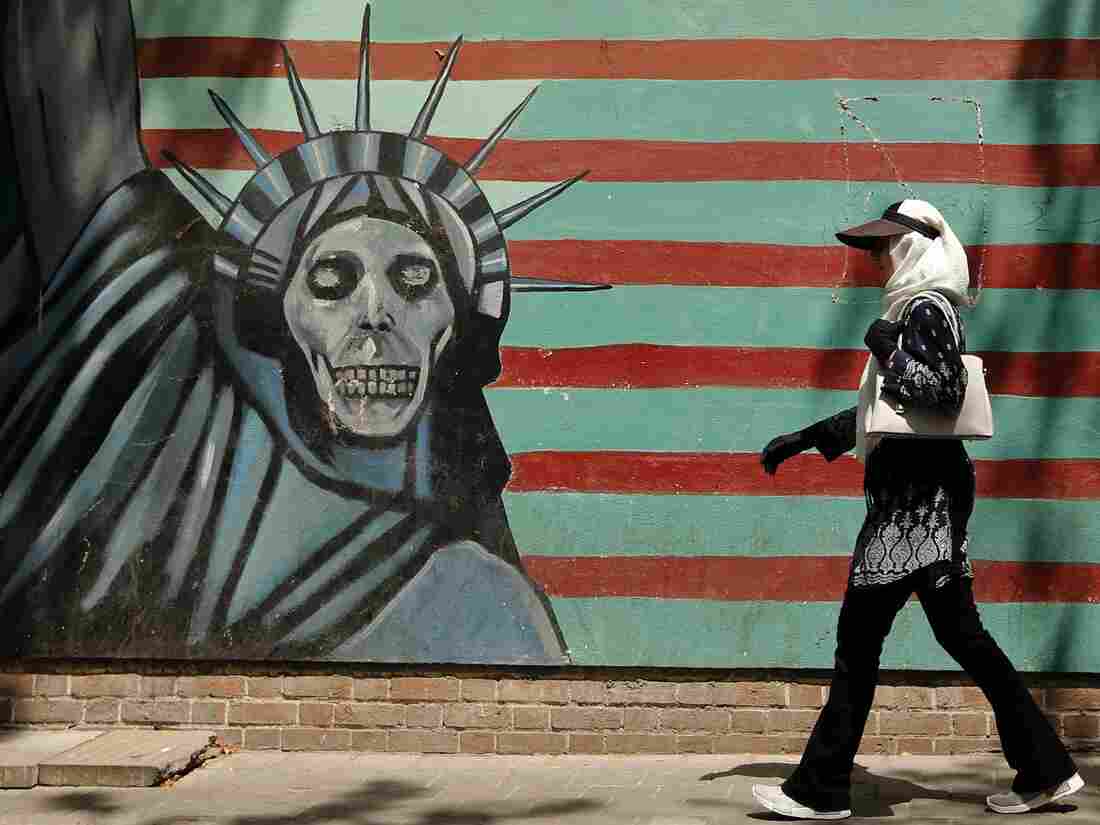 An Iranian woman walks past the former U.S. Embassy in Tehran, which bears a mural depicting the Statue of Liberty with a dead face. With just days to go until the U.S. plans to snap more sanctions back into place, questions linger about what the move spells for the world. Aatta Kenare/AFP/Getty Images hide caption 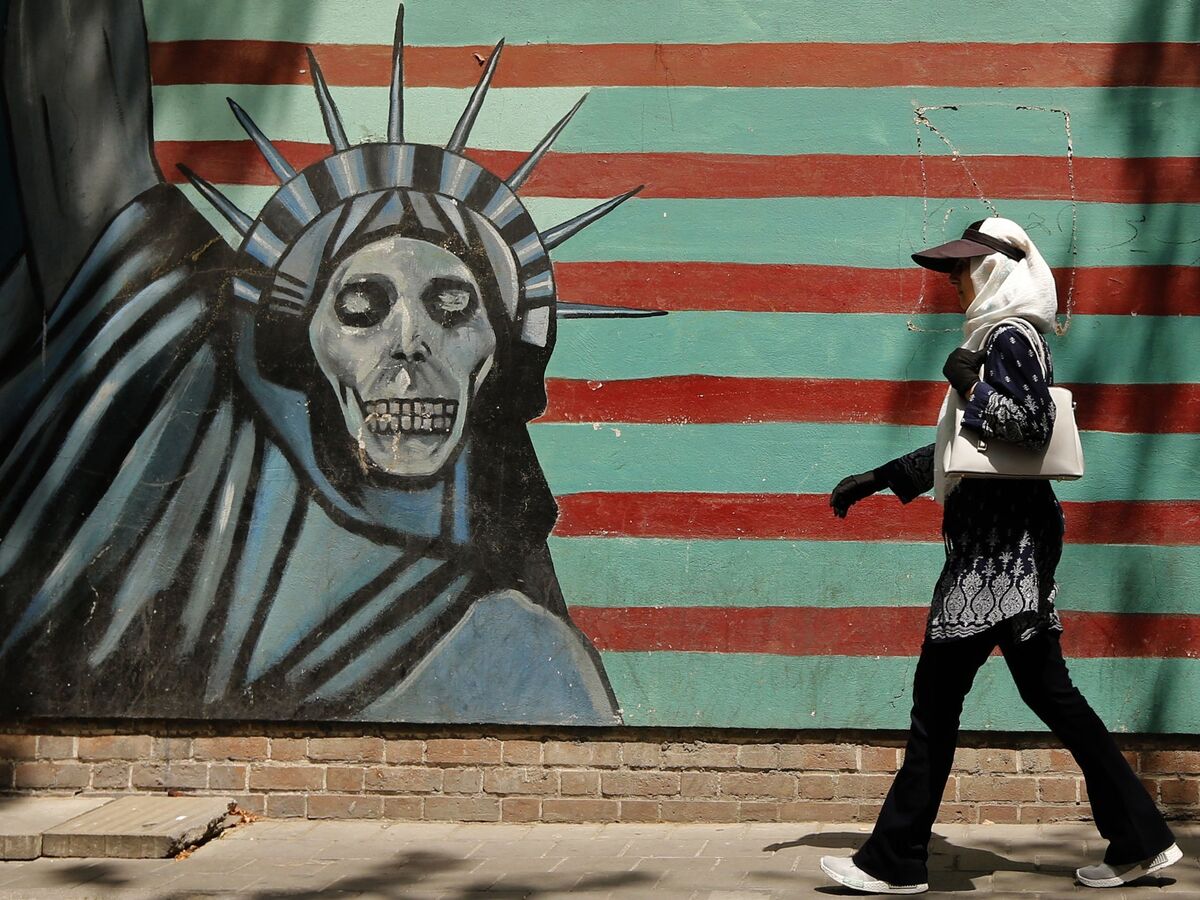 An Iranian woman walks past the former U.S. Embassy in Tehran, which bears a mural depicting the Statue of Liberty with a dead face. With just days to go until the U.S. plans to snap more sanctions back into place, questions linger about what the move spells for the world.

Roughly two days remain until the full measure of U.S. sanctions snap back into place against Iran. Secretary of State Mike Pompeo told reporters Friday that, come 12 a.m. ET Monday, the economic penalties leveled on the Iranian regime will return to levels unseen since the U.S. negotiated the 2015 multilateral nuclear deal.

The move is "aimed at depriving the regime of the revenues that it uses to spread death and destruction around the world," Pompeo said. "Our ultimate aim is to compel Iran to permanently abandon its well-documented outlaw activities and behave as a normal country."

Seen in broad strokes, the announcement Friday comes as no surprise.

Since May, when President Trump vowed to unilaterally pull the U.S. out of the Joint Comprehensive Plan of Action, his administration has telegraphed its intentions to restore the sanctions that had been lifted as part of the pact. The administration already leveled one major round of sanctions in August; now, it is restoring the complete set of sanctions — and even adding hundreds of names to the list, according to Treasury Secretary Steven Mnuchin.

"The Treasury Department will add more than 700 names to our list of blocked entities," said Mnuchin, who joined Pompeo on Friday's conference call with reporters. "This includes hundreds of targets previously granted sanctions relief under under the JCPOA, as well as more than 300 new designations. This is substantially more than we ever have previously done."

That said, the Trump administration plans to grant temporary exceptions to eight yet-to-be-named "jurisdictions," which Pompeo says will get six-month waivers from U.S. penalties while they "wind down" their oil business with Iran.

With the snapback just days away, the Trump administration announcement offers an opportunity to step back, understand the context — and answer a few important questions lingering around the move:

What specifically is taking effect Monday?
Why is the U.S. offering waivers to certain countries?
What's the Trump administration's goal?
How is Iran reacting?
What's going on with the Iran nuclear deal now? 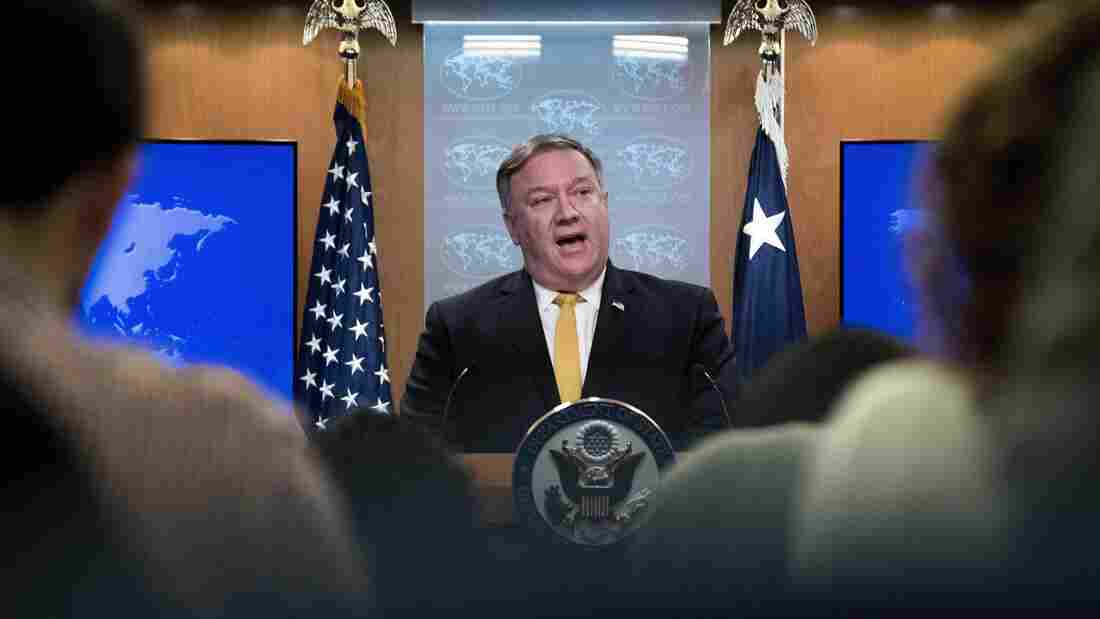 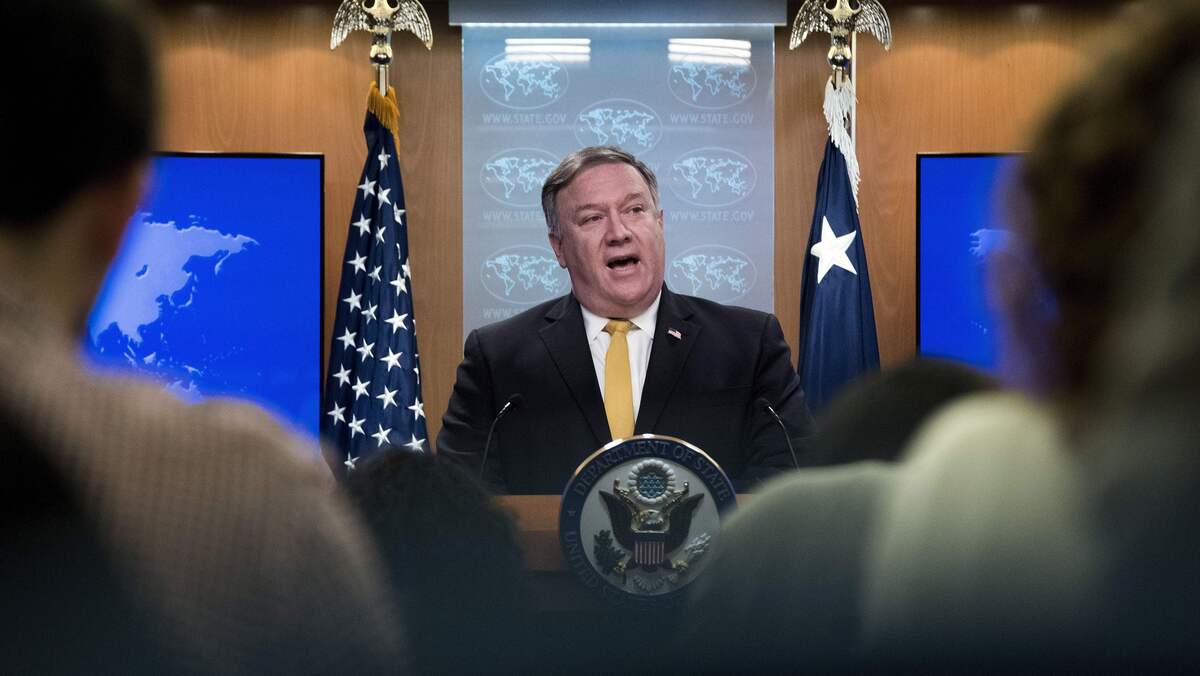 What specifically is taking effect Monday?

As part of the 2015 nuclear deal, the Obama administration lifted a host of sanctions aimed at the Iranian economy. The move came as a relief to Iran, nowhere more so than in its oil and banking sectors: Iranian tankers once more gained access to European and Asian markets, and the country gained access to some $100 billion in assets that had been frozen overseas.

When Trump's administration re-implemented the first major round of sanctions earlier this year, it slapped barriers on trade involving Iranian metals, as well as its automotive and airline industries. But Iran's oil and banking sectors are expected to see the biggest impact from sanctions — and those are precisely the areas his administration is targeting Monday.

The White House says it is going after major oil exporters, shipping companies and major Iranian banks — including the country's Central Bank and other financial institutions. And it will also "target those who attempt to violate or circumvent [the sanctions]."

"One hundred percent of the revenue that Iran receives from the sale of crude oil will be held in foreign accounts and can be used by Iran only for humanitarian trade or bilateral trade in nonsanctioned goods and services," Pompeo explained Friday.

The additional penalties are intended to "cut off revenues the regime uses to bankroll terrorist groups, foment global instability, fund nuclear and ballistic missile programs, and enrich its leaders."

Not all trade with Iran will be off-limits, however.

The White House plans to continue to allow the sale of humanitarian goods — such as food, medicine and raw agriculture products — to Iran. The U.N.'s top court ruled last month that the U.S. cannot apply sanctions to those humanitarian products entering Iran.

Why is the U.S. offering waivers to certain countries?

Ideally, the White House wants all of its trading partners to cut off all of their oil purchases from Iran. In reality, even if a country wishes to fully comply with that demand, it will take some time to seek out alternative suppliers of such a crucial resource.

As Reuters reports, some of Iran's top customers — including China and Turkey — are pushing back against the U.S. order, saying there are not enough oil supplies elsewhere to meet their demand.

So, the Trump administration says it is offering eight governments a temporary reprieve — but "only because they have demonstrated significant reductions in their crude oil and cooperation on many other fronts, and have made important moves toward getting to zero crude oil importation," Pompeo said Friday.

Pompeo declined to identify the eight "jurisdictions" getting waivers, though he clarified that the full European Union would not be one of them. He said the list would be released Monday when the sanctions were re-implemented.

President @realDonaldTrump is reimposing all sanctions lifted under the unacceptable Iran deal. The U.S. is reimposing the toughest sanctions ever on Iran, targeting many of the corrupt regime’s critical sectors.

First and foremost, the goal is to keep the Iranian government from getting cash.

Pompeo calls it a "maximum-pressure" campaign, intended to ensure Iran does not have the funds to support groups the U.S. views as destabilizing influences in the Middle East. That includes the Lebanon-based Islamist militant group Hezbollah; the Houthi rebels in Yemen; and Syrian President Bashar Assad.

And ultimately, the White House hopes to force Iran to return to the negotiating table to forge a new nuclear deal. Administration officials have said Trump is willing to meet with Iran's leadership to help hammer out that deal — but only if it's on more favorable terms for the U.S.

The administration says the buildup to the sanctions has already deprived Iran of some $2 billion over the past several months and that the Iranian economy is in crisis. Pompeo was careful to note, however, that Washington's actions "are targeted at the regime, not the people of Iran."

The U.S. says it's not aiming to topple the Iranian regime, but it has repeatedly encouraged Iranians to protest against their government and demanded "enormous change." That could ultimately lead to widespread unrest or even a tough crackdown by Iranian leaders. 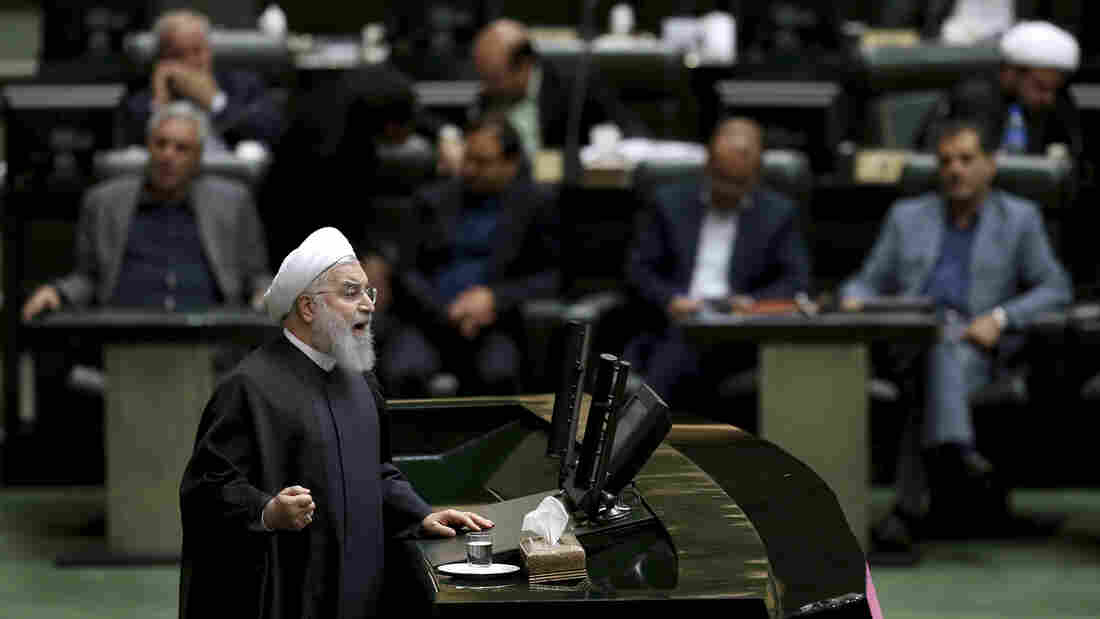 Iranian President Hassan Rouhani speaks during a session of parliament last week in Tehran. The leader urged lawmakers to help his government "resist" and "fight" the U.S. as it reinstates sanctions against the country. Ebrahim Noroozi/AP hide caption 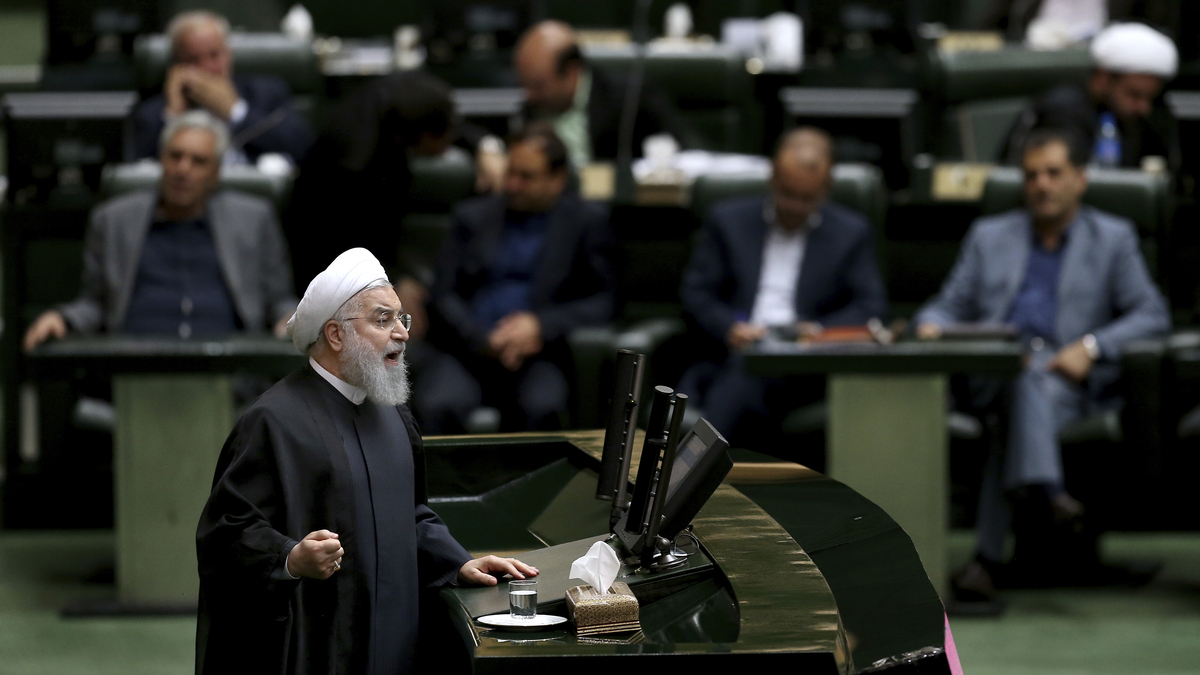 Iranian President Hassan Rouhani speaks during a session of parliament last week in Tehran. The leader urged lawmakers to help his government "resist" and "fight" the U.S. as it reinstates sanctions against the country.

How is Iran reacting?

Of course, no one has been more critical of the sanctions than Iran's leadership.

"Unfortunately, the US, through raising unfounded claims and in complete disregard for its international obligations, has abandoned the nuclear agreement and imposed extraterritorial and unilateral sanctions on Iran and, by extension, other countries," Iranian President Hassan Rouhani wrote in the Financial Times on Thursday.

And he referred to United Nations Security Council Resolution 2231, which endorsed the nuclear deal not long after its finalization in 2015.

"The US is, in effect, threatening states who seek to abide by resolution 2231 with punitive measures," Rouhani added. "This constitutes a mockery of international decisions and the blackmailing of responsible parties who seek to uphold them."

On Friday, the Iranian Foreign Ministry projected an air of confidence and disdain for the U.S. decision.

"America will not be able to carry out any measure against our great and brave nation," Foreign Ministry spokesman Bahram Qasemi told state media, according to Reuters. "We have the knowledge and the capability to manage the country's economic affairs."

Part of that confidence stems from the fact that only the U.S. has withdrawn from the deal. The rest of the seven signatories remain committed to it — which brings up one final question ... 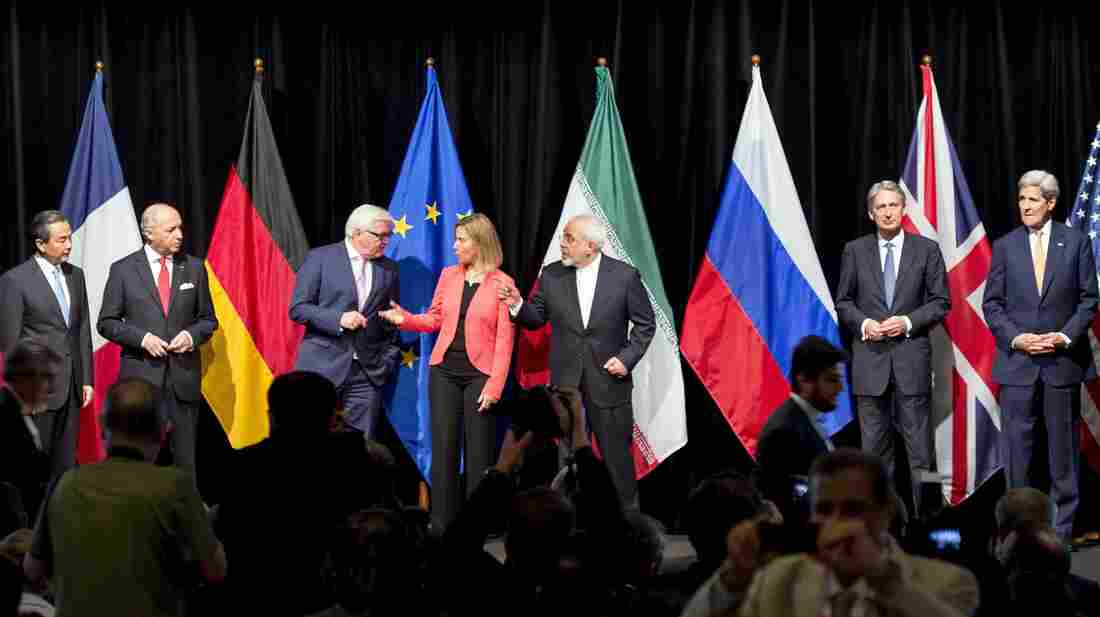 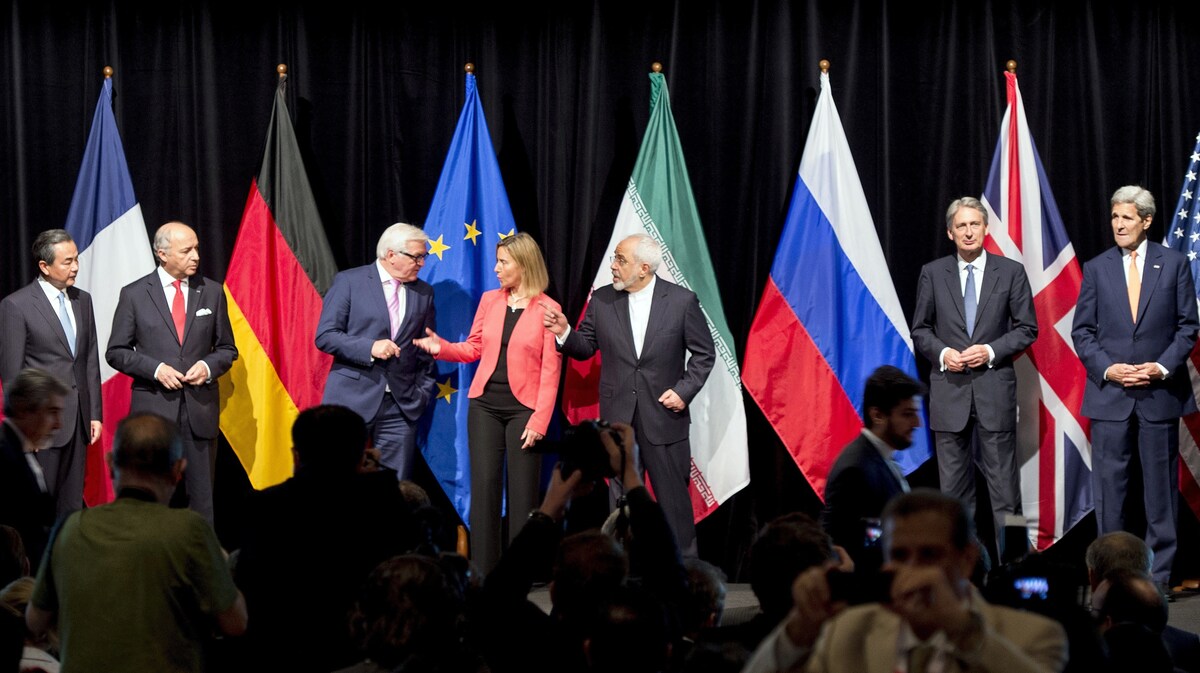 A slew of foreign ministers — including former Secretary of State John Kerry (far right) — pose for pictures in July 2015, not long after finalizing the Iran nuclear deal in Vienna.

What's going on with the Iran nuclear deal now?

Iran signed the deal in 2015 with the U.S., the U.K., France, Germany, Russia, China and the European Union, and the U.N. Security Council endorsed it not long afterward. To this point, the U.S. is the only party to drop out of the multilateral agreement.

That's partly because the International Atomic Energy Agency, whose inspectors have overseen the destruction of much of Iran's equipment for producing nuclear fuel, has said repeatedly that Iran is in compliance with the deal's terms.

Despite the White House's objections to the deal — namely that it's not tough enough and that it would expire in a about a decade — many analysts have asserted that it is effectively preventing Iran from being able to build nuclear weapons.

The agreement "is working and delivering on its goal," representatives for the EU, France, Germany and the U.K. said in a joint statement released Friday.

"We remain committed to implementing the JCPoA as a matter of respecting international agreements and of our shared international security, and expect Iran to play a constructive role in this regard."

Still, the new U.S. sanctions will make it much harder for Iran to get money, and that was Iran's main incentive to sign the deal. Other countries that still support the deal warn that if Iran sees diminishing benefits, it could kick out the IAEA and ramp up its nuclear program again.