Accessibility links
Protesters Delay Release Of Pakistani Woman Acquitted For Blasphemy Asia Bibi's sentence was overturned this week, prompting protests by hard-line religious groups. They are calling for Bibi to be killed, along with the three judges who issued the verdict. 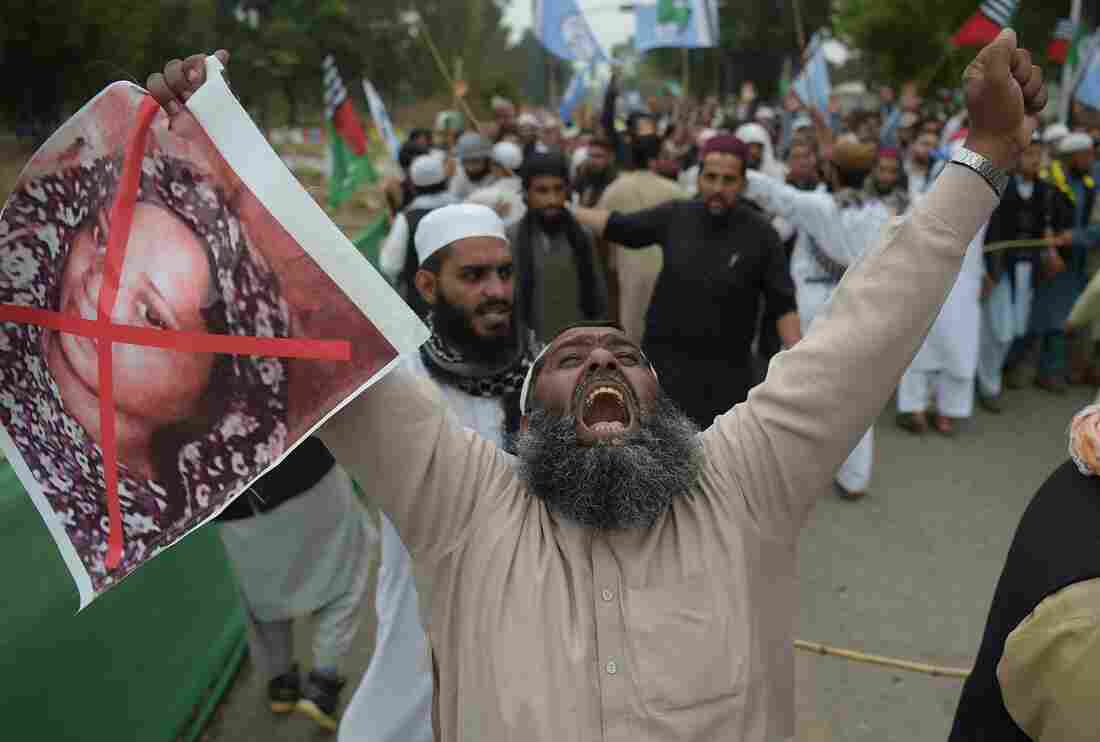 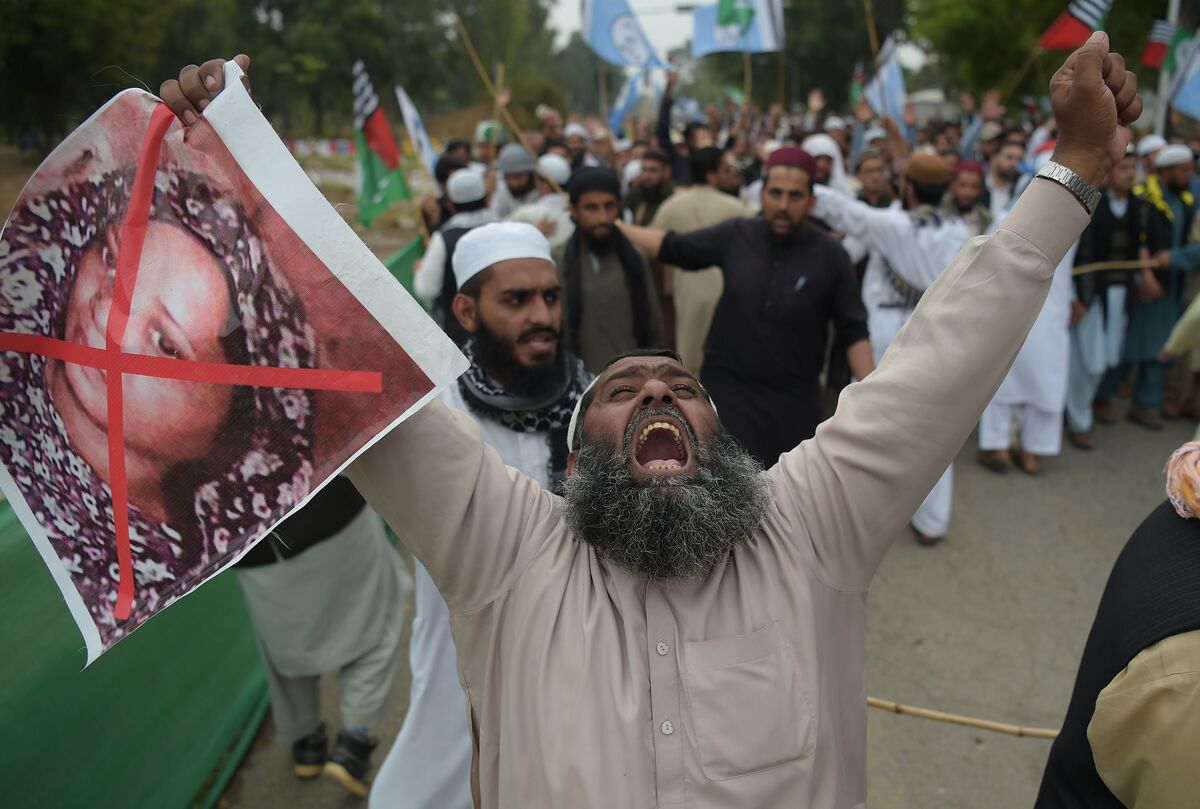 A Pakistani supporter of the Ahle Sunnat Wal Jamaat (ASWJ), a hardline religious party, holds an image of Christian woman Asia Bibi during a protest rally following the Supreme Court's decision to acquit Bibi of blasphemy in Islamabad.

A Christian woman who was acquitted by Pakistan's Supreme Court after spending eight years on death row for insulting Islam is still being held in an undisclosed location. Her release was delayed after negotiations failed between the government and an extremist religious group that is demanding she be killed.

Asia Bibi's sentence was reversed on Wednesday in Islamabad. Almost simultaneously, followers of a hard-line Pakistani religious group rushed onto major highways across the country to paralyze traffic in protest of the decision.

They called for Bibi to be killed, along with the three Supreme Court judges who issued the verdict. They also called on Pakistani military forces to disobey the army chief of staffs, accusing him of not being a Muslim.

Even in a country which generally tolerates a great deal of hate speech by the religious right, the calls against the army chief, Gen. Qamar Javed Bajwa, seemed to stun many in Pakistan. It led to the prime minister, Imran Khan, warning the protesters in an evening televised address that the state could be forced to act against them. Negotiations began shortly after the prime minister's address to defuse the situation.

Those talks collapsed early Friday after the government refused the group's request that Bibi be forbidden from leaving the country.

Then Khadim Hussain Rizvi, the leader of the group known as Tehreek-e-Labbaik, told followers at a rally that Pakistani forces would use violence against them if they did not disperse their sit in. In response, he said, "We are ready to die to show our love for the prophet," according to The Associated Press.

Following the collapse of talks, the AP reported security was beefed up around the undisclosed detention facility where Bibi is being held. Her family was also in hiding, waiting for Bibi's release so they could leave Pakistan. Both France and Spain have offered asylum to the family.

Underscoring the threats against Bibi on Friday, thousands of followers of Tehreek-e-Labbaik, students of religious seminaries and others rallied through the capital and on a nearby intersection, vowing they would not be removed.

"What is the punishment for insulting the prophet?" the men chanted in central Islamabad. "Separate the head from the body!" they responded.

There were also demonstrations in other parts of Pakistan. Fears of violence kept schools closed Friday, local media reported. Some hospitals were on high alert and security forces shut down cellular networks to prevent militants from coordinating attacks.

Bibi, an illiterate Christian farmhand, was convicted and sentenced to death in 2010 after her fellow Muslim farmworkers accused her of insulting Islam. She was held in solitary confinement for more than eight years. A previous appeal hearing was adjourned in 2016 on a legal technicality.

Bibi's case has garnered international concern and condemnation. Pope Benedict XVI called for her release. Pope Francis met with her family. Several Western countries offered her asylum. The case also underscored the power of extreme religious groups that have long claimed that Western countries were trying to weaken Islam.

The case led to the murder of a prominent governor, Salmaan Taseer, when he spoke out in defense of Bibi and against blasphemy laws in 2011. He was killed by his bodyguard – who was later executed, but is revered by many on the religious right. Two months after Taseer's death, a Christian minister, Shahbaz Bhatti, who had also been critical of blasphemy laws, was also shot and killed.

Pakistan's liberals and rights activists have long argued that the country's blasphemy laws are toxic, and even deadly. Even the accusation of blasphemy has led to vigilante lynchings. The laws have been used to settle disputes and old feuds, but they have been particularly targeted against Pakistan's embattled minorities.