Accessibility links
The Republicans Who Could Keep A Hold On Blue States This Year Even with the Democratic intensity of 2018, Republican governors Larry Hogan of Maryland and Charlie Baker of Massachusetts defied partisanship to position themselves well to win reelection Tuesday. 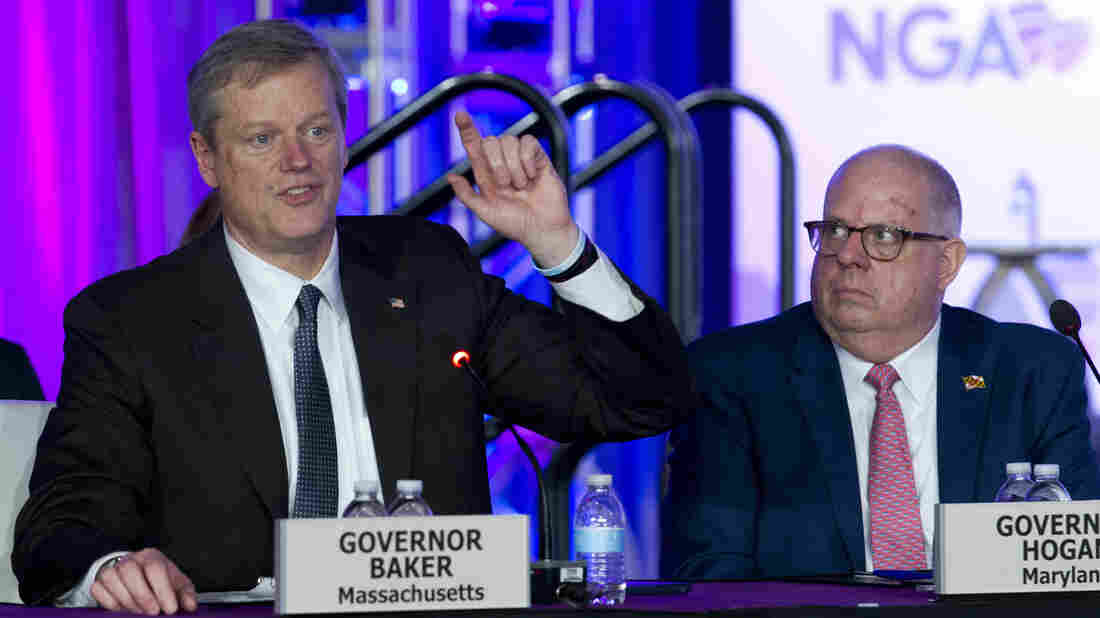 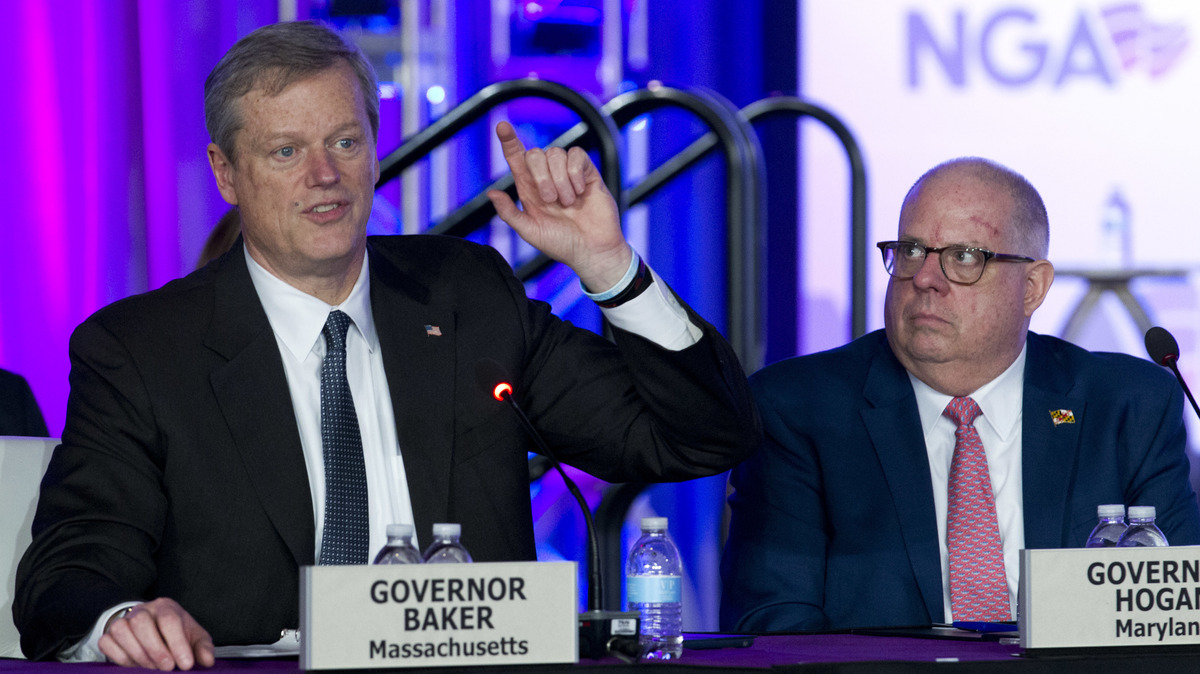 Maryland and Massachusetts are places where Trump has his lowest approval ratings in the country — 35 percent. Yet, the Republican governors in those states have approval ratings near 70 percent.

Few will be shocked if Maryland Gov. Larry Hogan and Massachusetts Gov. Charlie Baker both win reelection on Tuesday even though Republicans are largely on the defensive in governors races. Polls show they have double-digit leads over their Democratic challengers, with a shared ability to create a distinct GOP brand in an era of politics dominated by Donald Trump.

At a recent rally in Montgomery County, Md., a vote-rich, left-leaning region near Washington, D.C., Hogan spoke with a sign that read "Democrats for Hogan" hanging off the stage, urging the crowd to look beyond party labels.

"The divisiveness in politics today, it's one of the things that I'm disgusted with," Hogan said. "We need to bring both parties together. And quite frankly, I think we're setting an example for the rest of the nation about how you can work together to get things done." The remark was met with cheers.

Keep the trains running on time

After running four years ago as a mass transit cynic, Hogan has championed major transportation projects.

The biggest was ending the three-decade debate over whether to build the Purple Line, a light rail route connected to the Washington, D.C., transit system that would link the state's two most populous counties, which broke ground last year. The other involves having the state eventually join neighboring Washington, D.C., and Virginia to provide permanent funding for their shared public transit system.

In Final Stretch, Groups Work To Get Young People, Minorities To The Polls

"So four years into the Hogan era we find ourselves a state on the right track," he said. "Jobs are up, taxes are down. Our reputation to do business is reinvigorated."

Hogan also garnered public support for his response to the 2015 Baltimore riots, following the death of 25-year-old African-American Freddie Gray while in police custody. Hogan deployed the National Guard to help tamp down the unrest, a move that many people, particularly outside of Baltimore, saw as an example of leadership.

In Massachusetts, Baker recruited a couple of high profile Democrats to his administration, including his transportation secretary Stephanie Pollack, who describes herself as a "lifelong progressive Democrat." Despite her personal politics, she says she's found common ground with the Massachusetts governor on the need to improve existing infrastructure — specifically the subway and bus lines.

"His philosophy is we owe it to taxpayers to run government well. And isn't that a core progressive belief?" she asked rhetorically.

Pollack, who was well-known in Boston as a transportation guru for her work at Northeastern University's Dukakis Center, says too often her fellow progressives don't realize that their visionary ideas won't matter if they don't know how to run the government and deliver.

"For me, Governor Baker's entire administration is about delivering," she said. "And delivering right now is actually more important than promises and vision."

Other Democrats praised Baker's management and leadership after a series of record snowstorms in 2015 that blanketed the region with more than 100 inches of snow.

"The thing that really sticks out about his poll numbers is how broad his support is," said Steve Koczela, president of the MassINC Polling Group. "Often times his support numbers have actually been higher among Democrats than among Republicans."

Koczela's most recent poll found 61 percent of Democrats have a favorable opinion of Baker.

Keeping their distance from Trump

Both say they did not vote for the president in 2016. Both broke with the administration over sending National Guard troops to the U.S.-Mexico border during the family separation crisis. Both governors also publicly disagreed with the president's decision to pull out of the Paris climate accord.

"How [Hogan] has governed under Trump has been really politically impressive," said Mileah Kromer, the director of the Sarah T. Hughes Field Politics Center at Goucher College in Maryland. "Hogan has been able to maintain a [diverse] coalition of voters throughout his time in public office, really speaks to someone who really under stands what resonates with the public."

Will Keyser, a former aide to the late Massachusetts Democratic Sen. Ted Kennedy and now a senior adviser on Baker's reelection campaign, said the Trump administration has created a set of challenges, but it's also created a clear contrast for Baker.

Despite their bipartisan appeals, both men have their Democratic critics.

John Walsh, the former chairman of the Massachusetts Democratic Party, insists Baker is popular because he's noncontroversial and noncommittal.

"Literally, the most conservative Republicans in Massachusetts and I agree about Charlie Baker. We're not voting for him because he stands for nothing," said Walsh, who's volunteering for Baker's opponent Jay Gonzalez. "He values his high poll numbers more than progress on any issue, on any side of the issue spectrum."

In Maryland, a major criticism from Democrats is that Hogan will oppose policies, then take credit for them later. One example is the so-called "lock box" ballot initiative, that if approved would ensure casino revenues don't get divvied up for anything other than funding K-12 education.

In ads the governor asks voters to support "the Hogan lockbox initiative." Maryland Democrats say he is taking credit for a constitutional amendment they worked to put on the ballot.

Other critics of Hogan fear that he will shift from being a moderate to a more conservative politician if he wins reelection.

Larry Stafford, the executive director of Progressive Maryland said, "He can play a nice political game and say he's distanced himself from Donald Trump, but he's not someone who is going to stand up when Donald Trump is at his worst." Stafford backs Hogan's Democratic opponent, former NAACP President and CEO Ben Jealous.

But aides and analysts say there hasn't been a compelling case made by the Democrat challengers in either state that voting for Baker or Hogan is somehow a vote for Trump.