Accessibility links
9 Things You Need To Know About Education And The Election From teachers running for office to ballot measures that can add billions to public education, here's our guide to how the issue is playing out.

9 Things You Need To Know About Education And The Election

9 Things You Need To Know About Education And The Election 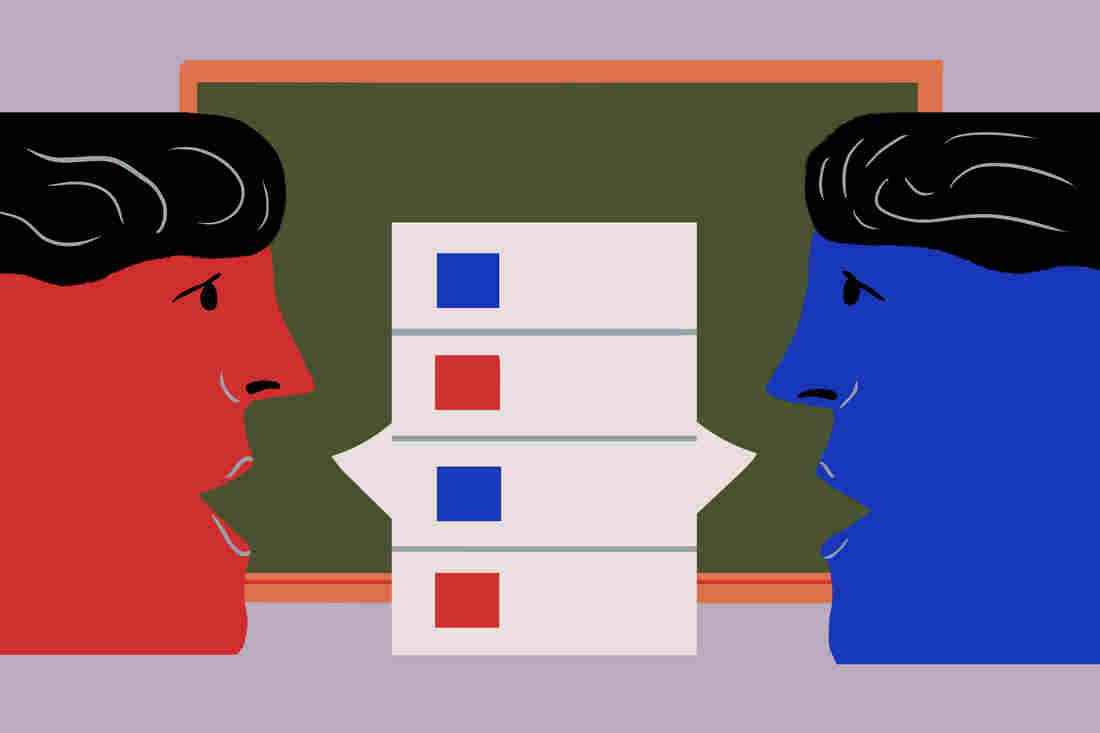 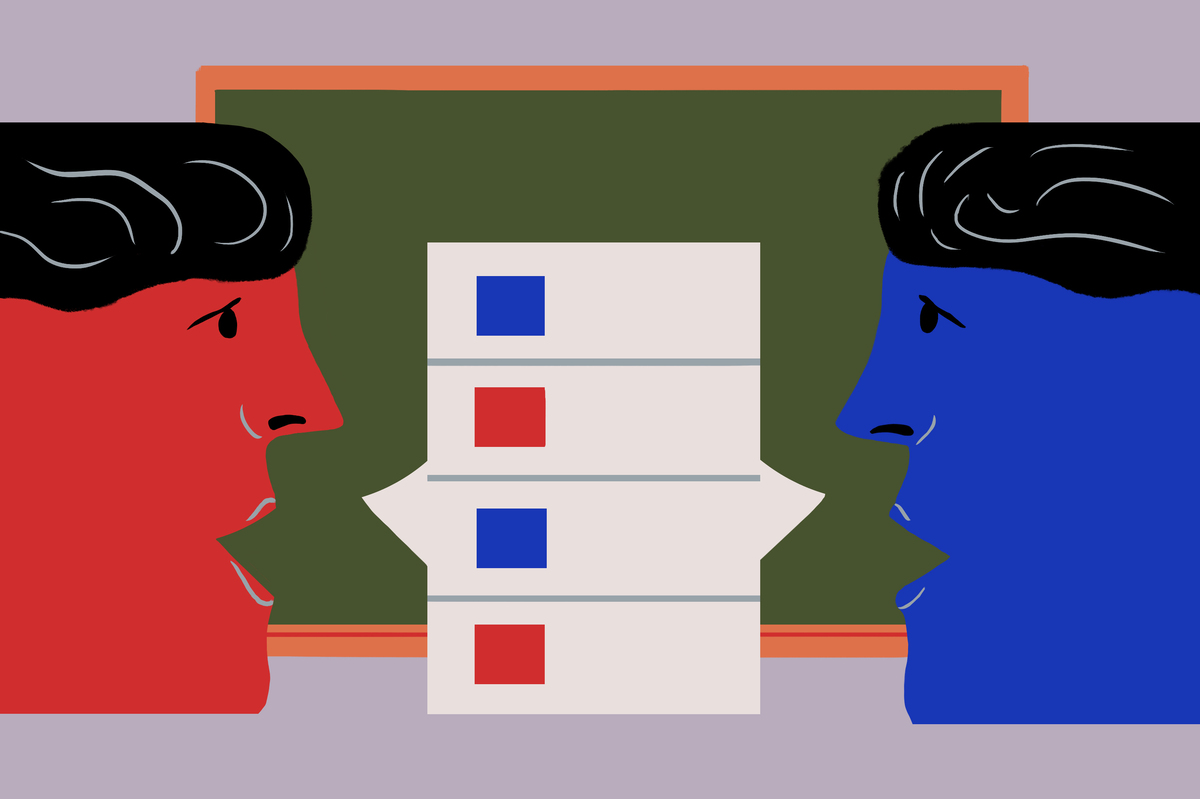 In an election that's largely not about education — polls and NPR's reporting says immigration and healthcare are two top issues — we wanted to focus on the places where education is influencing and mobilizing voters.

Here are our nine takeaways of what to watch:

1. Teachers are flexing their (political) muscles

With just days to go, both of the major teachers' unions have devoted their considerable resources to the election.

The American Federation of Teachers has its members on the ground, making calls and knocking on doors, for more than 100 key Senate, House and gubernatorial races.

While the AFT is focused more on national races, the National Education Association (the largest U.S. teachers' union with nearly 3 million members) is primarily targeting state and local races.

This shouldn't be a surprise. This has been a year packed with teacher activism. There were walkouts and demonstrations in five states. What did they want? Their main concerns were better pay and working conditions. Arizona, West Virginia, Colorado, Kentucky and Oklahoma are also states with some of the lowest education funding rates in the nation, as well as very low rates of teacher pay.

Why Teachers Are Going From Classrooms To Campaign Trails

Why Teachers Are Going From Classrooms To Campaign Trails

For education advocates, conversations on funding education are long overdue.

In a report, the Center on Budget and Policy Priorities called the last 10 years, "A Punishing Decade for School Funding." Twenty-five states are still providing less total school funding per student than they were in 2008, according to this report by the AFT.

2. Keep an eye on the governor's races

Education is the No. 2 issue in campaign ads for governors, according to the Wesleyan Media Project. It falls to 15th when you look at Senate and House races, says Travis N. Ridout, the project's co-director. This, he explains, is reflective of the importance of states vs. the federal government in setting education policy.

There are 36 gubernatorial races on Tuesday. Seventeen of those, because of retirements and term limits, will see a new governor in office. And 12 states will elect governors who appoint the state school chief (often called a superintendent).

New Mexico and Maryland are two states where the governor will have to make tough choices right away: rewriting the formula used to determine how funds are distributed to schools.

Voters in Georgia, Maine, Maryland, Montana, New Jersey, New Mexico, Oklahoma, Rhode Island, Colorado, Missouri and Utah will see education funding measures on the ballot. All told, these could add $2.6 billion for early childhood, K-12 and higher education. That's according to the Center for American Progress.

Colorado is considering the biggest increase in education funding: $1.6 billion. Amendment 73 proposes to create a Quality Public Education Fund through tax hikes for corporations and individuals who earn more than $150,000 a year.

Three states are looking at new sources of education revenue.

Michigan is mulling whether to legalize recreational marijuana. If approved, 35 percent of excise taxes on weed in the state would go towards K-12 education, with the rest of the revenue devoted to local governments and road repairs. Voters in Missouri are considering a similar measure. If passed, the proposal would legalize medical marijuana and funnel tax revenue towards veteran healthcare and early childhood education.

(The idea to fund education by taxing marijuana sales has appeared on state ballots before. Voters in Nevada, Oregon and Colorado approved similar measures, since as early as 2012.)

Maryland, meanwhile, is looking at casino revenue to support early education, career and technical education, dual enrollment programs and more. The measure is anticipated to generate at least $750 million in supplemental funding from 2020 to 2022.

Many Democrats are predicting an anti-Trump blue wave that will lead their party to take the House. Democrats only need 23 seats to take control. The numbers, however, seem less favorable to Democrats when it comes to taking over the Senate.

Democratic control of the House could bring a new push to update the Higher Education Act. This is the main federal law governing approximately $120 billion in annual federal financial aid spending through grants, loans and work-study. It also covers anti-sex discrimination rules found under Title IX. The legislation was first passed in 1965 and last updated in 2008.

In the past year, both parties submitted their own bills with — wait for it — major differences. The two sides are currently are at an impasse, particularly on guidelines for federal student aid and regulations of for-profit colleges. A Democratic majority in the House could allow for enough bipartisan cooperation to pass a renewal, says Bethany Little, a principal of the Education Counsel, an educational consulting firm.

The controversial U.S. Education Secretary, Betsy DeVos, has been mentioned in $3 million worth of political TV ads and dozens of Facebook ads, overwhelmingly Democratic, according to a new analysis by Politico.

In races and states where public education is a big issue, her work advocating for vouchers and charter schools, scaling back civil rights protections for students, and siding with loan servicing companies over student borrowers could motivate many voters, even though DeVos' name isn't on the ballot.

David Garcia, a professor at Arizona State University, is running on the Democratic ticket against incumbent Republican Gov. Doug Ducey.

Ducey is campaigning on how he ended the teacher walkouts this spring: by signing a bill that promised a 20 percent raise to teacher salaries. NPR has reported that the legislation does not require that every teacher get a 20 percent raise.

The race could be a nailbiter. Garcia has attacked Ducey's record on education but has faced a "crush of spending from incumbent Ducey and his allies," reports Bret Jaspers of member station KJZZ.

Arizona will also be voting on the future of school vouchers. Proposition 305 will try to expand the state's voucher program from special-needs students to all students in the state.

Republican Ducey is a firm supporter of charter schools in the state, saying he's skeptical of the "profit motive" of charter institutions.

Democrat Tony Evers, the current superintendent of public instruction, is up against Republican incumbent Gov. Scott Walker, with education as the spotlight issue of the race.

About 40 percent of voters there put K-12 education as one of their top two issues, according to polling by Marquette University Law School.

Public education has experienced a bumpy road in Wisconsin since Walker took office in 2011. Funding for K-12 schools saw a $749 million cut during Walker's first two years in office. Last year, the state boosted funding by $649 million, a figure Walker has frequently cited in his campaign ads.

Although Wisconsin wasn't a part of the 2018 wave of teacher walkouts, teachers there did express their brooding discontent in 2011. Teacher unions in the state lost collective bargaining rights when Walker passed an anti-union act.

(Following its passage, median salaries dropped by 2.6 percent and median benefits by 18.6 percent, and many teachers left their jobs, according to the left-leaning Center for American Progress.)

Evers is proposing increased investment in all levels of education, from early childhood through higher ed. Polling suggests Evers has an edge with independents, but according to Shawn Johnson of Wisconsin Public Radio, "Wisconsin's Republican Party has a proven record of getting its voters to turn out."

Keep an eye on this one: West Virginia's 3rd Congressional district. It's an open seat in an impressively red district that's currently held by a Republican, and yet Democrats see a chance to flip it blue.

Ojeda is a state senator, army veteran and former high school teacher. Miller is a member of the state House of Delegates and a small business owner.

As state senator, Ojeda has been a fierce advocate for education, including better pay for teachers. He became the face of teacher walkouts in the state earlier this year, to the point where some protesters chanted his name, reported Politico.

For her part, Miller has focused her campaign on economic growth, particularly for the coal industry, gun rights and combating the opioid epidemic.

Miller is a pro-Trump candidate, riding on the tailcoat of the president's success in the region. Ojeda, on the other hand, has vocalized regret for voting for Trump in 2016. (In 2016, 73 percent of voters in the district voted for President Trump.)

You can Follow NPR's live coverage of the 2018 election right here — all day and through the night — for the latest news, results and analysis.

In a previous version of this story, we said that Hawaii was among states with an education funding measure on the ballot. On Oct. 19, the Hawaii Supreme Court invalidated that measure, which was a proposed constitutional amendment, and said any votes that were cast for it were not to be counted.