Accessibility links
Joining The Poll Worker Army On Election Day's Front Lines For all the talk of "rigged" elections, cyberthreats, voter suppression and fraud, it's often poll workers who have the most impact on whether your voting experience goes well. 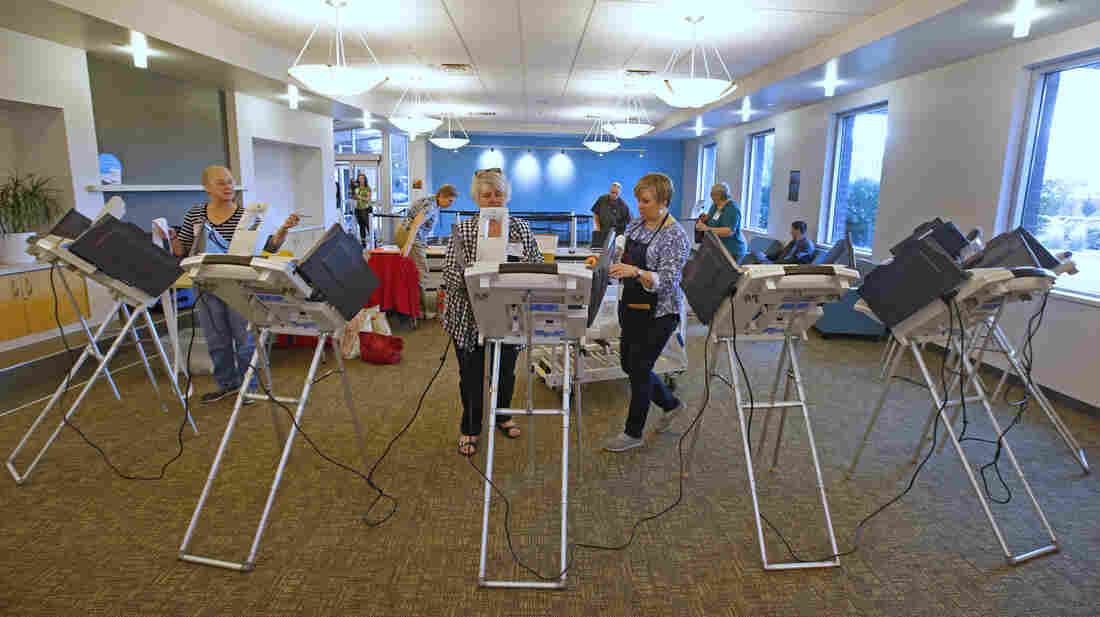 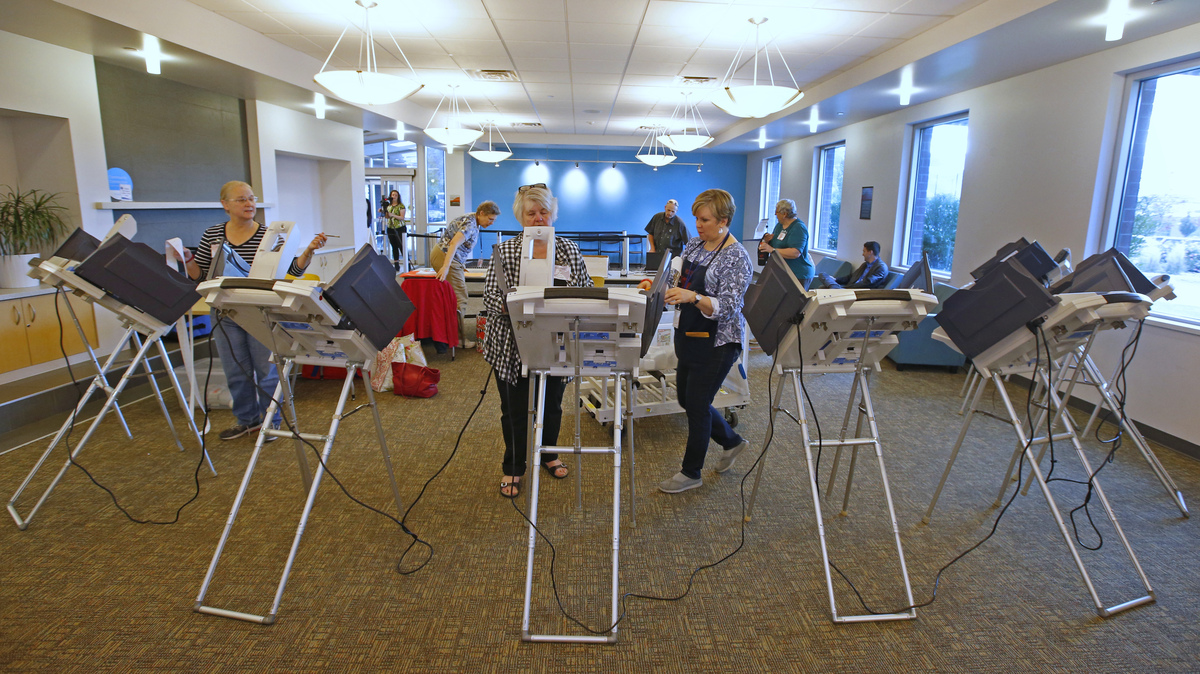 Poll workers set up voting machines for early voting in Provo, Utah, in 2016.

On Nov. 6, I'll join almost a million other Americans who have volunteered — for a minimal fee — to help man the polls.

It's an extraordinary thing when you think about it. This army bands together for a single day (or several, if you include early voting) to make sure every American can exercise one of their most fundamental rights. For all the talk of "rigged" elections, cyberthreats, voter suppression and fraud, it's often those on the front lines who most affect your voting experience. And that responsibility has only become more complicated.

After reporting about voting for NPR for 18 years, I decided that it was finally time to work at the polls. I'm usually covering the story, but this year I'm off writing a book and had the time.

I started with poll worker training class. In my class of 18, all but two of us were women. We began the four-hour session getting tested on some of the rules, especially for voters with disabilities. No, a voter who wants assistance does not need a note from their doctor. Yes, voters can get help reading and even marking their ballot, as long as the helper fills out a Voter Assistance Form and is not their boss, union representative or a candidate. And doesn't tell them how to vote.

We then learned how to set up the polling site. Almost everything — ballots, machines, pens, tape, signs, etc. — is stored in a black metal cabinet that should be waiting, locked, at the polling site on election eve. Our boss, the chief election judge, will have the keys. There will be diagrams showing exactly where we have to put the equipment inside and the signs outside showing voters where to go and where the "No Electioneering Zone" begins (100 feet from the door).

My first reaction was, "Wow, there's so much to remember! How will I do it all?" My second reaction was that I'd better not mess up. All these steps are needed to make sure voters can cast their ballots easily, safely and fairly on Election Day.

Do we know what to do if there's a problem, like a malfunctioning machine or a missing address? Will we know where to send you if you're in the wrong precinct? Can we spot voter intimidation or cheating? Will we make you feel welcome?

Most importantly, poll workers need to know the rules. These vary greatly from state to state, even from county to county. I live in Montgomery County, Md., where it's OK to wear a campaign T-shirt or hat in the polling place as long as you're just voting, not electioneering. That's not the case everywhere. In Texas, it's a misdemeanor if you wear a political T-shirt, button or hat. (But if you're a Texas poll worker licensed to carry a firearm, you can bring your gun on Election Day. That's a no-no in Maryland.)

In Texas, voters also have to show a government issued photo ID to cast a ballot. Maryland voters don't need any ID. They just have to provide their name, address and date of birth. But it can be confusing. There are exceptions to both these rules, and sometimes they change. A judge in Missouri just issued a last-minute decision upending the state's new voter ID law. Will every poll worker in the state know that on Election Day?

Poll worker confusion can lead to long lines and discourage those who have little time to spare. Or even worse. In North Carolina, a poll worker gave 150 early voters the wrong ballot. They now have to come back if they want their votes to count.

Education Is A Top Issue In Midterms, And Professors Promise To Encourage Voting

That's why poll worker recruitment and training is so important. It's a challenge finding enough workers, so election offices began signing people up months ago. Montgomery County needs 3,200 elections judges (as they're called there), but recruits 4,500, knowing some will get sick or drop out at the last minute. Most places also pay their poll workers a nominal fee as an incentive. My county is relatively generous — $210 to attend the training class, set up the equipment on election eve and work about 15 hours on Election Day.

Montgomery County is also among a growing number of places that allow 16-and 17-year-olds to help at the polls to encourage young people to get involved. In 2016, more than half of all poll workers nationwide were over age 60, so polls welcome the teenagers' energy and technological know-how.

Back in training class, we pair off to practice rolling a big ballot-scanning machine down a ramp and out of the cabinet. Our trainer tells us to be careful — don't tip it over or hurt ourselves. This machine is where voters will insert their completed ballots to be counted. We then remove collapsible voting booths from blue boxes and try to assemble them. The most important tip: make sure the spindly legs are properly secured so the booths don't come crashing down.

Maryland used to have electronic touchscreen voting, but recently went back to paper. That presents its own challenges. The ballots this year are three pages long. We practice forming a mini assembly line, tearing pages off pads of ballots and inserting them into manila folders, so each voter gets a complete set. We're told to prepare at least 50 of these folders on election eve so we're ready for the morning rush.

We also set up an electronic ballot marking machine to be used primarily by votes with disabilities, such as those who are blind or have trouble using a pen. We take turns trying to insert a tricky cable into the underside of the machine. You have to squeeze the sides of the plug just right for it to work.

We then assemble the electronic poll books used to check voters in. These poll books contain the county's voter registration database and are sealed with coded security tags. Almost everything here is locked or labeled to guard against tampering, and we have to log every seal in the "Electronic Pollbook Integrity Report." We're told NEVER to remove the red seal!

Each poll book also comes with a printer and a tumble of wires and cables. All these machines have to be connected properly to work. "DO NOT connect an Electronic Pollbook power cord to the printer," we're warned in the trainer manual. "It will cause severe damage to the printer." Some poor poll worker probably discovered that the hard way.

The poll books also have to be connected to each other, so when a voter is checked in by one poll worker, we all know. That way, no one gets to vote twice. We also practice checking in sample voters and what to do if there's a problem. Like when the information they give us doesn't match what shows up on the screen. A voter might have to complete a Voter Update Form if they've recently moved or changed their name. Or maybe they'll need a provisional ballot, which will be counted after the voter's information is verified.

All other voters are given what's called a Voter Authority Card. They have to hand this card to another poll worker, who will give them one of those manila folders with the ballots. The voter then takes that to a booth, pens in the ovals next to their choices and brings the completed ballot to the scanning machine. Another poll worker will help them insert the completed ballot and collect their Voter Authority Card. Those cards have to be counted several times during the day, to make sure the totals match the number of voters checked in and ballots cast.

That's how it's supposed to work, at least. Rest assured, there are rules on how to handle almost every conceivable problem, like ripped or "spoiled ballots." Even threatening behavior inside the polling place.

I've covered voting since the disputed 2000 presidential election, and realize that the poll worker's job has become more complicated for a reason: To ensure that votes are properly counted, voters aren't intimidated, no one cheats, and polls are accessible to all who want to cast a ballot. The ultimate goal is to give people more confidence in the results.

I'm comforted knowing that each polling site has an experienced chief judge who has done this before and can tell us what to do if we're confused. I'm also encouraged that among the first instructions in my training manual is "Greet the voter." Everything will probably work out just fine. It usually does.