Accessibility links
Georgia's Kemp Accuses Democrats Of Hacking; Opponent Abrams Labels It A Stunt Two days before facing Stacey Abrams in the race for governor, Georgia Secretary of State Brian Kemp says his office is investigating the state's Democratic Party but offered no proof of wrongdoing. 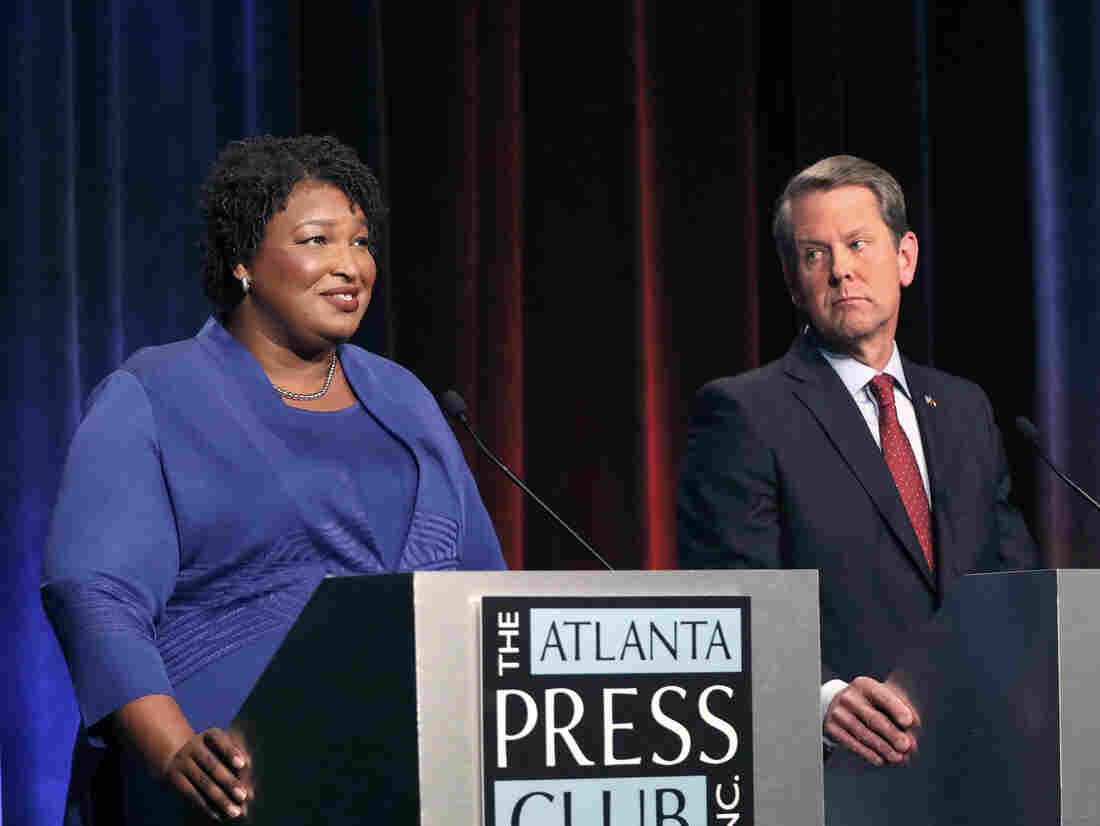 Georgia's Republican secretary of state, Brian Kemp — who is locked in a tight race for governor against Democrat Stacey Abrams — says the Democratic Party tried to hack the state's election system. Kemp says he has asked the FBI to look into "potential cyber crimes" but has offered no proof of any wrongdoing. John Bazemore/AP hide caption 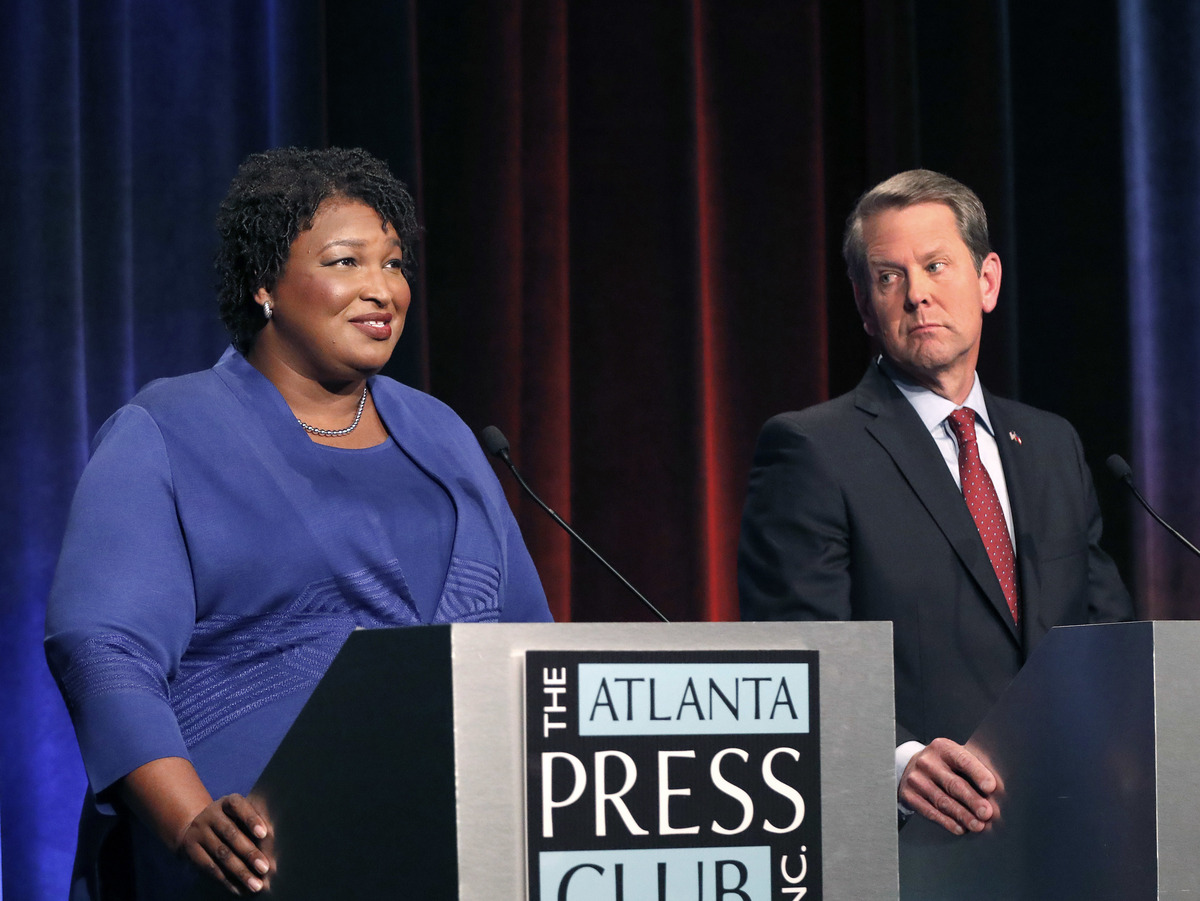 Georgia's Republican secretary of state, Brian Kemp — who is locked in a tight race for governor against Democrat Stacey Abrams — says the Democratic Party tried to hack the state's election system. Kemp says he has asked the FBI to look into "potential cyber crimes" but has offered no proof of any wrongdoing.

Just two days before facing Democrat Stacey Abrams in a closely watched race to be Georgia's next governor, the state's sitting Secretary of State Brian Kemp — who is also the Republican candidate — says his office has opened an investigation and also asked the FBI "to investigate potential cyber crimes committed by the Democratic Party of Georgia."

Kemp did not provide any evidence of any wrongdoing. In a highly unusual situation, Kemp is in the position of overseeing the election that will decide his state's highest office and has faced criticism over how it has been handled.

Democrats responded to the announcement by calling it "a reckless and unethical ploy," saying Kemp was trying to gain an edge in his neck-and-neck race with Abrams.

"He is trying to rile up his base by misleading voters yet again," Abrams told The Atlanta Journal-Constitution. "The Democrats did nothing wrong."

"After learning of a failed attempt to hack the state's online voter registration and My Voter Page, my office contacted the Department of Homeland Security and opened an investigation," Kemp said in a brief posting on his campaign's Facebook page.

The accusation emerged on Sunday amid reports that Georgia's election system, which Kemp oversees as secretary of state, is open to glaring vulnerabilities. It also came shortly after a federal judge ruled that Georgia must relax voting restrictions that could prevent more than 3,000 people from casting ballots in Tuesday's poll.

Kemp provided few details about his accusation, other than to say, "We have asked the FBI – Federal Bureau of Investigation to investigate" the possible crimes. It's unclear from that statement whether Kemp was using "We" to refer to his campaign or his state office.

Citing a potential for conflict of interest, Georgia Democrats, including former President Jimmy Carter, have unsuccessfully asked Kemp to step aside as secretary of state until after the election.

Georgia's election has drawn a national spotlight, and both President Trump and former President Barack Obama have visited the state in recent days to tout support for Kemp and Abrams, respectively. And as NPR's Scott Detrow reported last week, Democrats who are considering presidential runs in 2020 also have made trips there.

The Georgia secretary of state's official website says the office "opened an investigation into the Democratic Party of Georgia" regarding a failed hacking attempt on Saturday night, adding that it also alerted federal authorities.

"While we cannot comment on the specifics of an ongoing investigation, I can confirm that the Democratic Party of Georgia is under investigation for possible cyber crimes," said Candice Broce, the office's press secretary. "We can also confirm that no personal data was breached and our system remains secure."

Edgardo Cortés, Virginia's former elections commissioner who is now an election security adviser for the Brennan Center for Justice, told the AJC that Sunday's announcement was "bizarre" and said the timing of it is "problematic."

"It all just sounds very strange," Cortés said. "You suddenly open an investigation without giving any sort of details about what happened? In Virginia, we would never have done something like that because I think it would have created a lot of concern among voters."

Kemp was criticized earlier this year, when it was found his office purged more than 100,000 people from Georgia's voter rolls because, as member station WABE reported, "they had decided not to vote in previous elections and they failed to respond to mailed notices from the state."

As NPR's Shannon Van Sant reported over the weekend, U.S. District Judge Eleanor Ross sided with civil rights groups who charge that the state's "exact match" law, which can be used to disallow voting for such things as missing hyphens, accent marks and middle initials, was overly restrictive.

In her ruling, Ross noted that such restrictions were likely to fall most heavily on minorities.

A report by The Associated Press said that under the "exact match" law, Kemp had stalled more than 50,000 voter registrations by mostly black voters. The news service also reported that through a process Kemp calls "voter roll maintenance," his office has "cancelled over 1.4 million voter registrations since 2012" and that "nearly 670,000 registrations were cancelled in 2017 alone."