Accessibility links
U.S. Renews Sanctions On Iran But Exempts 8 Oil Importers, Including China And Japan Iran can either "act like a normal country, or it can see its economy crumble," U.S. Secretary of State Mike Pompeo said.

U.S. Renews Sanctions On Iran But Exempts 8 Oil Importers, Including China And Japan

U.S. Renews Sanctions On Iran But Exempts 8 Oil Importers, Including China And Japan 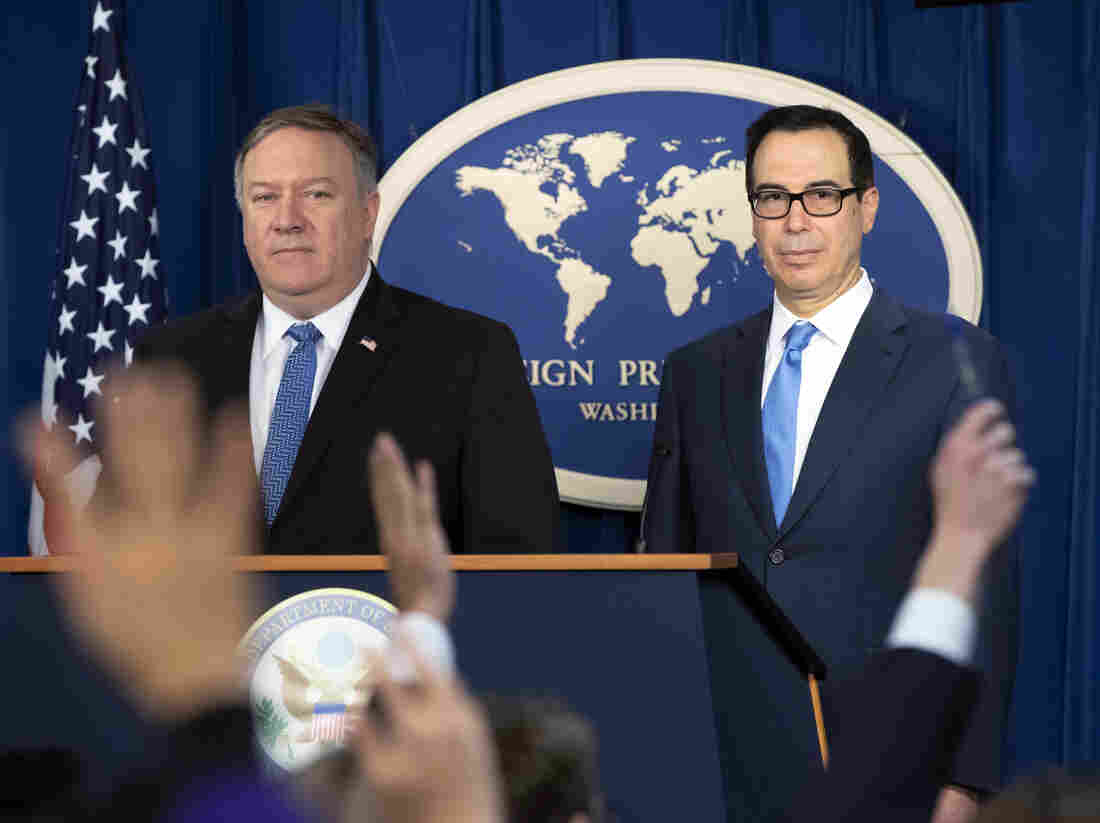 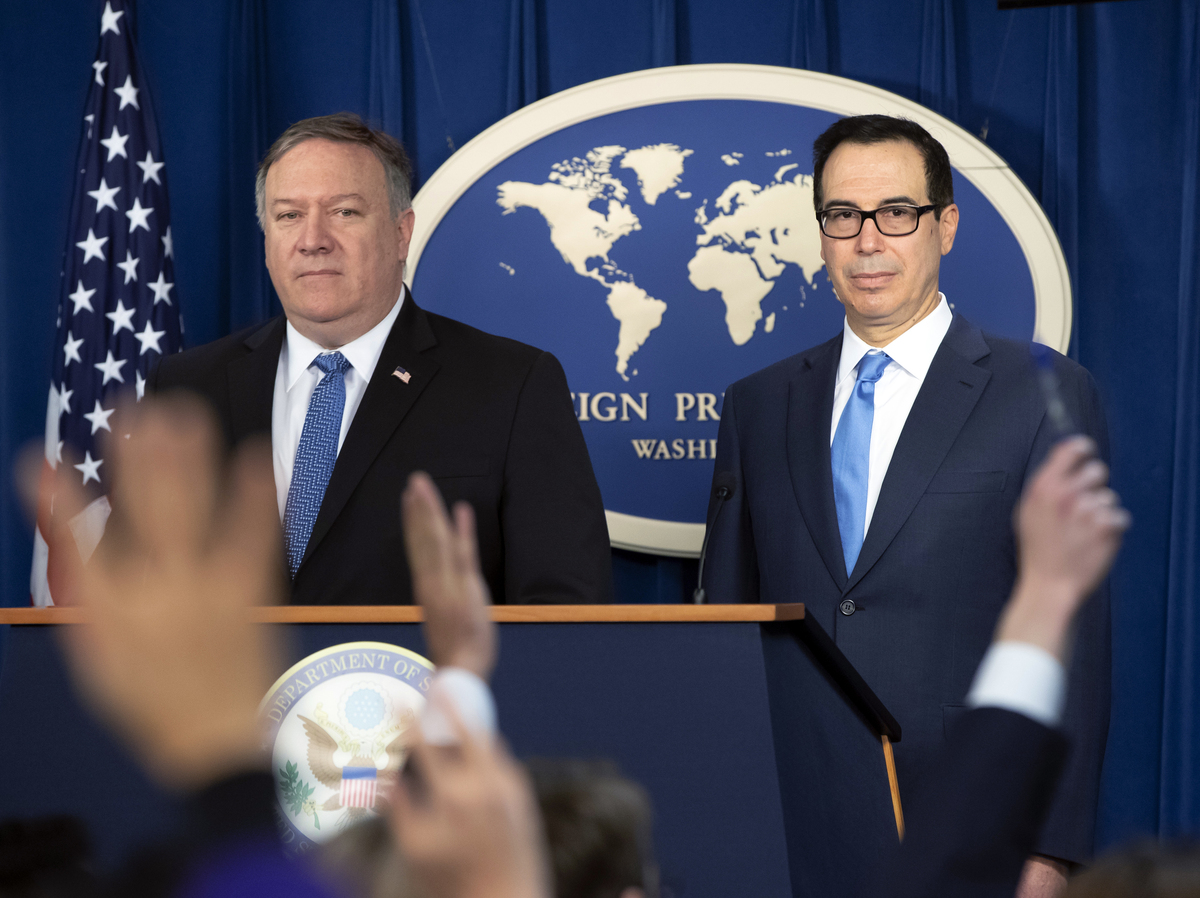 The U.S. has officially imposed what the Trump administration calls the "toughest ever" sanctions on Iran, meant to curb Tehran's nuclear and missile programs and contain its growing influence in the Middle East. The sanctions are essentially the same ones lifted by the nuclear deal reached during the Obama administration. However, the U.S. quickly exempted several of the world's largest economies, including China, Japan and India.

"The Iranian regime has a choice," U.S. Secretary of State Mike Pompeo said as he detailed the sanctions on Monday. "It can either do a 180-degree turn from its current course of action and act like a normal country, or it can see its economy crumble."

Several of the countries on the exemption list had already sharply reduced their imports of Iranian crude and other petroleum products, as they and the rest of the world prepared for Monday's deadline set by the U.S.

Japan and South Korea recently brought their imports of Iranian oil down to zero, according to the Center for Strategic and International Studies, which adds that China and India have shown little sign they will comply with the U.S. sanctions. Overall, the center says, the threat of sanctions led to a 32 percent drop in Iranian exports as of September, compared with the average for the first half of the year.

Pompeo said all of the money from the exempted nations' purchases of Iranian oil will be held in foreign accounts, and that the funds will be available only for humanitarian use or for Iran to trade in nonsanctioned goods.

Iranian President Hassan Rouhani celebrated the exemptions, saying on Monday, "The fact that today, the United States exempts 8 countries for buying Iran's oil, while it explicitly said that it will reduce Iran's oil sale to zero, is a victory for us."

Speaking at Iran's Ministry of Economic Affairs and Finance, Rouhani added, "Of course, if they didn't exempt these 8 countries, we would sell our oil" anyway.

The move by the White House reimposes U.S. sanctions that were lifted as part of a 2015 multinational deal with Tehran and imposes hundreds of additional sanctions designed to hit Iran's key economic sectors — including oil and gas, shipping and banking.

Pompeo says the U.S. has also issued waivers to allow European companies to proceed with work they've been doing to modify three of Iran's nuclear facilities so they comply with nonproliferation goals.

"What we've authorized is very narrow, very limited," Pompeo said when asked about that provision.

"We are watching the Iranian regime with laser focus," Mnuchin said on Monday.

The Treasury Department says the sanctions target hundreds of entities, including 50 Iranian banks and more than 200 people and vessels in the shipping and energy sectors, along with Iran Air, the national airline.

The sanctions are "aimed at depriving the regime of the revenues that it uses to spread death and destruction around the world," Pompeo said last week. "Our ultimate aim is to compel Iran to permanently abandon its well-documented outlaw activities and behave as a normal country."

As NPR's Colin Dwyer reported recently, "Since May, when President Trump vowed to unilaterally pull the U.S. out of the Joint Comprehensive Plan of Action, his administration has telegraphed its intentions to restore the sanctions that had been lifted as part of the pact. The administration already leveled one major round of sanctions in August; now, it is restoring the complete set of sanctions — and even adding hundreds of names to the list, according to Treasury Secretary Steven Mnuchin."

The sanctions include "energy, banking, shipping, and shipbuilding industries," Pompeo said. He added that if the U.S. determines any company subverts the sanctions on Iran, "the United States will levy severe swift penalties on it, including potential sanctions."

Pompeo said the U.S. would like to negotiate a new deal with Iran. But Iran's leaders have accused the U.S. of failing to live up to an international deal it helped create — and Rouhani said on Monday, "You live up to your commitments and then we'll talk." 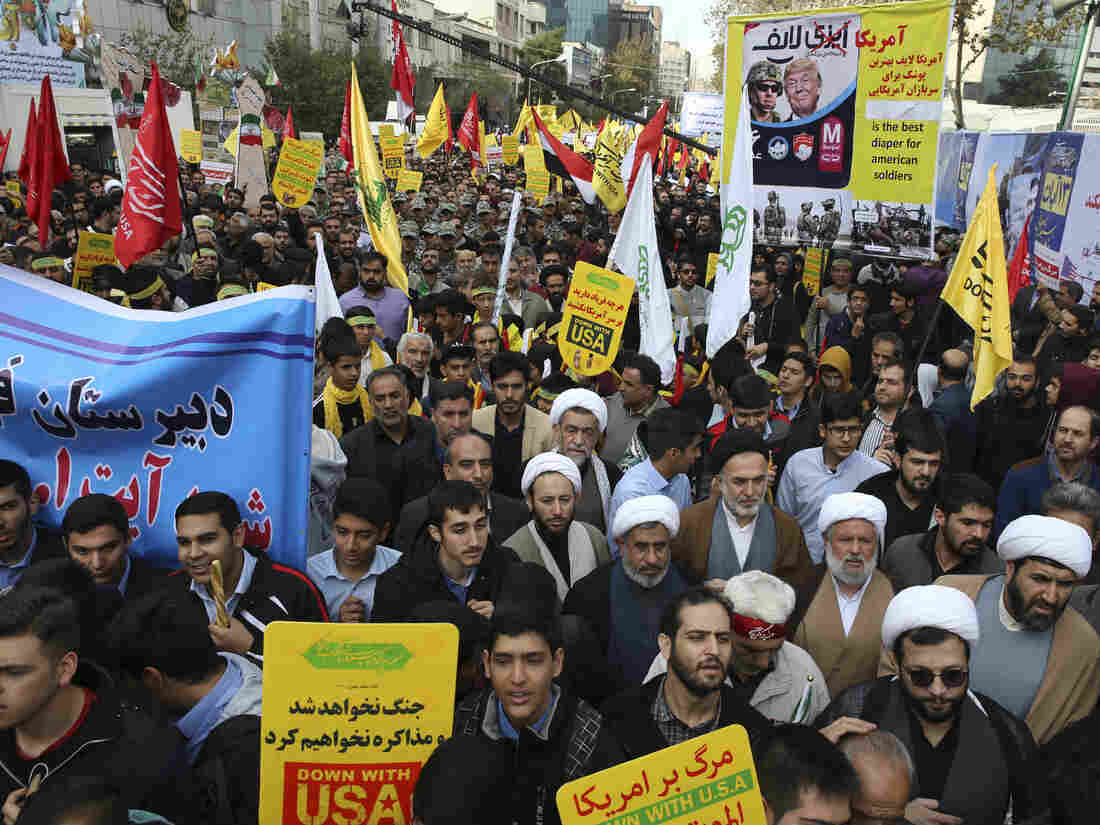 Demonstrators in Iran attend a rally in front of the former U.S. Embassy in Tehran on Sunday, marking the 39th anniversary of the seizure of the embassy by militant Iranian students. Vahid Salemi/AP hide caption 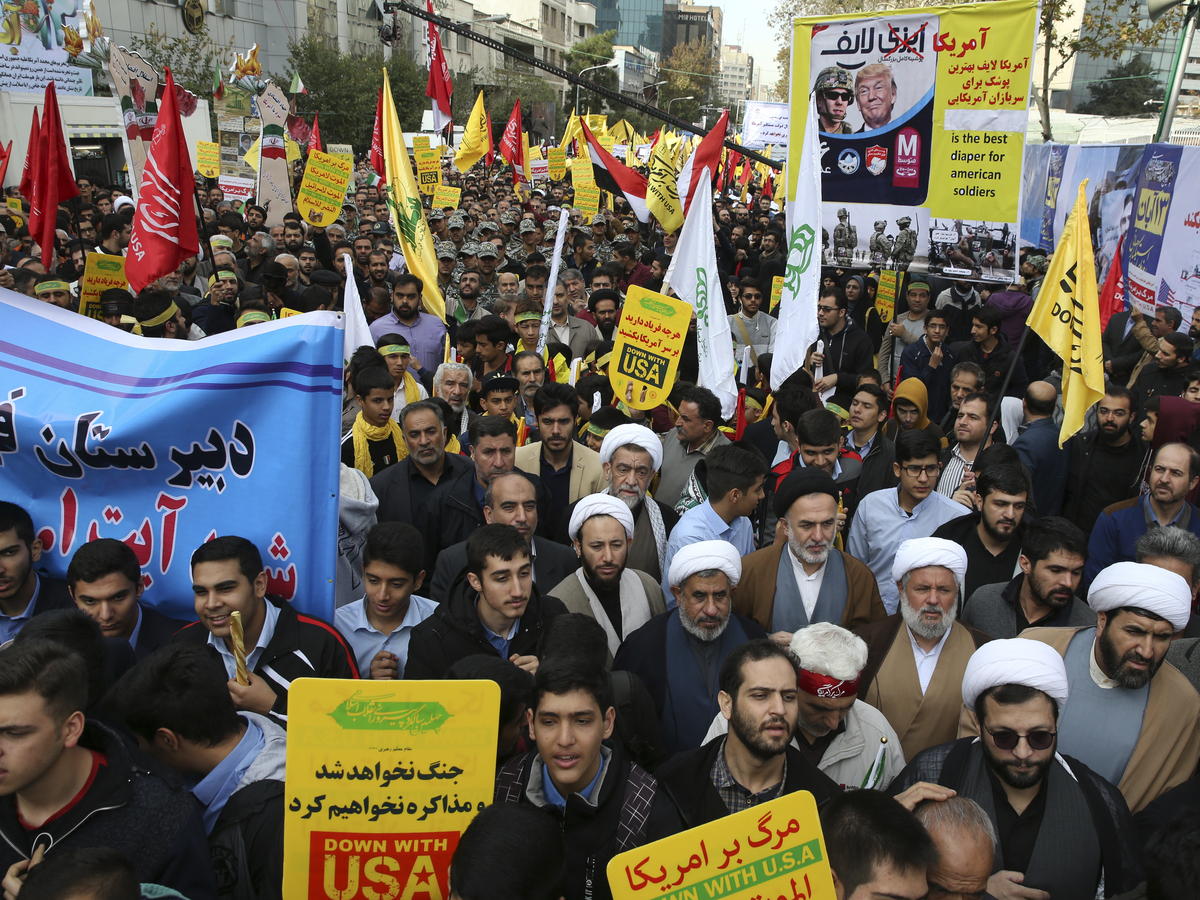 Demonstrators in Iran attend a rally in front of the former U.S. Embassy in Tehran on Sunday, marking the 39th anniversary of the seizure of the embassy by militant Iranian students.

Rouhani also said Iran "will break the sanctions with honor." And he criticized President Trump, saying: "I don't think any other administration in the history of the United States has been this much against the law and international treaties. They have all had breaches of the law, but these people are at the top of them all."

Over the weekend, demonstrators poured onto Tehran's streets to mark the 39th anniversary of the occupation of the U.S. Embassy there, an action that precipitated a protracted hostage standoff that helped tank President Jimmy Carter's chances at re-election and nearly took down the Reagan administration amid the Iran-Contra scandal.

Thousands of protesters gathered in front of the former U.S. Embassy, burning American flags and chanting "Death to America!"

The U.S. is working with countries on the exemption list to line up alternate suppliers of oil, Bolton said.

"But let's be clear," he added. "We're going to have sanctions that even go beyond this. We're not simply going to be content with the level of sanctions that existed under Obama in 2015. More are coming."