Accessibility links
What If The Polls Are Wrong Again? 4 Scenarios For What Might Happen In The Elections The polls show a Democratic advantage in the House and a Republican one in the Senate. But be ready for anything because surprises in politics always happen. 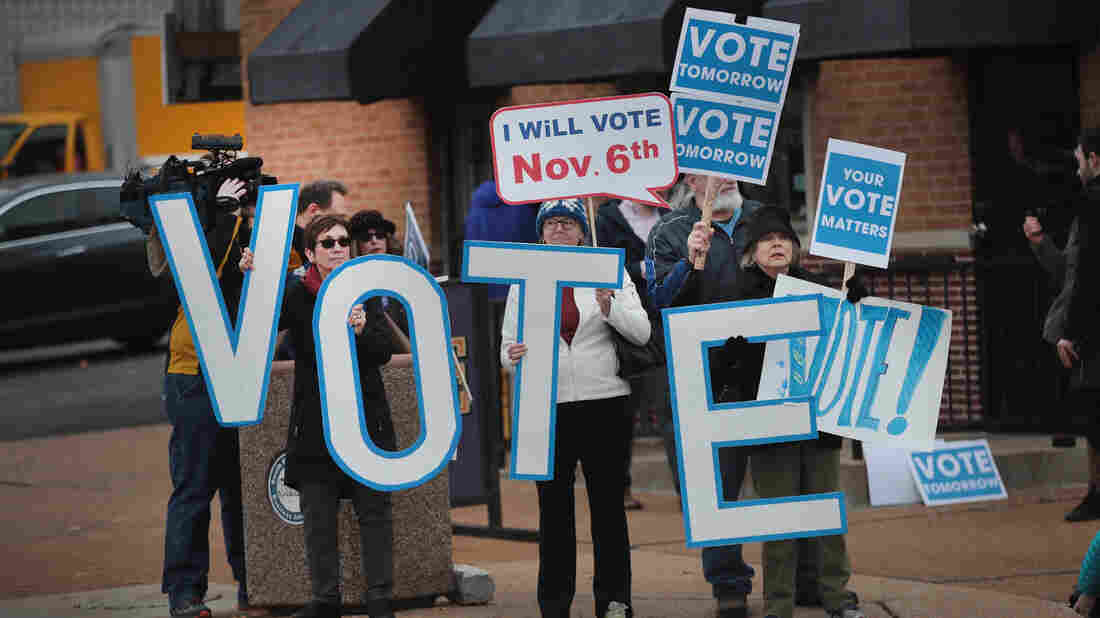 Supporters of Missouri Democratic Sen. Claire McCaskill wait for her to arrive at a campaign stop in St. Louis on Monday. Scott Olson/Getty Images hide caption 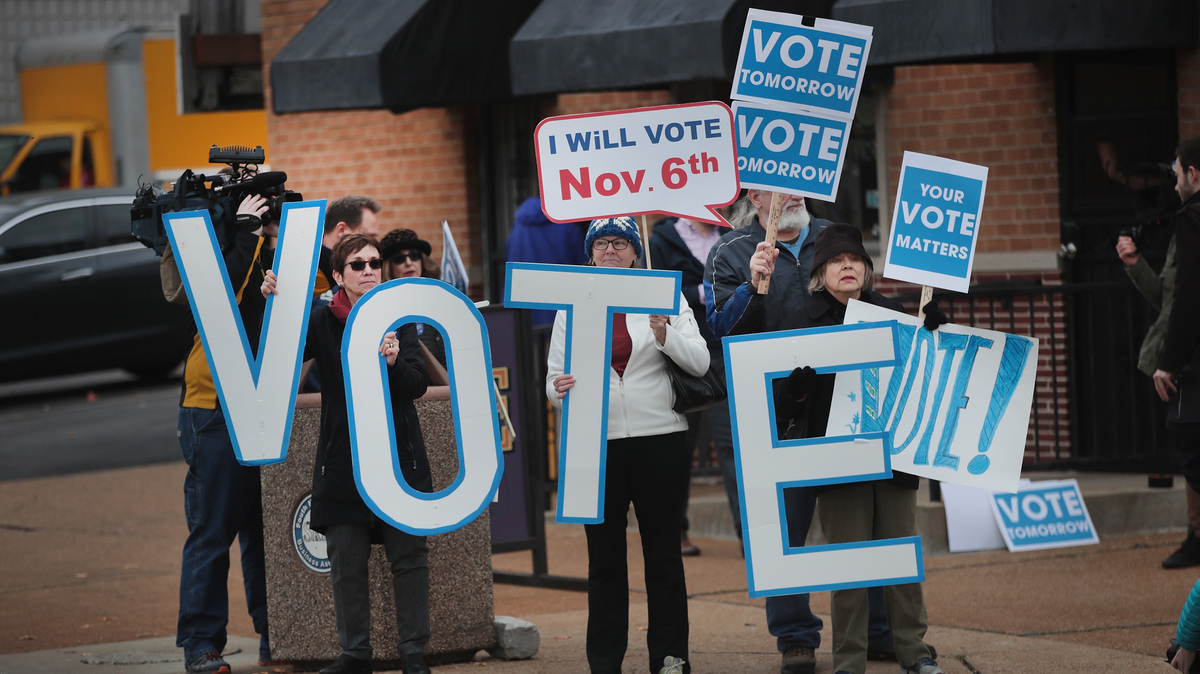 Supporters of Missouri Democratic Sen. Claire McCaskill wait for her to arrive at a campaign stop in St. Louis on Monday.

There's a lot that can happen Tuesday, the culmination of a long midterm election campaign that will provide the first nationwide measure of the U.S. electorate since Donald Trump was elected president.

One narrative has become dominant: that Democrats are likely to gain control of the House and Republicans hold the Senate, if not expand their majority there. That narrative is based largely on national polls, and caution should be urged. Pollsters have made a lot of adjustments to hopefully correct what they got wrong in 2016, but they can't tell you precisely who is going to show up to vote.

What's more, there have been far fewer statewide and district-specific surveys than in past midterm elections. And, as it is, there are data both parties can take solace in that buoy their respective cases. So everyone should be prepared for surprises — because there always are some. That's the beauty of campaigns and voting.

Here are four scenarios for how election night might play out and what each could mean.

1. Democrats win the House, and Republicans hold the Senate

This is the most likely outcome, based not just on the polls but also on conversations with strategists in both parties. But they urge caution, because the races in the many districts across the country that are up for grabs are still very close.

How it would happen: Forget the polls; Democrats are favored to take back the House for more reasons than that. There have been a record number of retirements, reducing the built-in advantage incumbents tend to have; record numbers of candidates, especially Democratic women, have run for public office; Democrats won the off-year elections in Virginia and New Jersey; they won or fared better than expected in special elections across the country; there was high primary turnout for Democrats in many states; and there is very high early voting turnout.

And just look at how wide the playing field is — Democrats need to pick up 23 seats to take back the House, and they are targeting some 80 Republican-held seats. Republicans are competing in just eight held by Democrats. That right there is and has been a huge flashing red light for the GOP. So many of those races are running through the suburbs, where independents and wealthy, college-educated women live, both of which have consistently in polling said they disapproved of the job the president is doing and prefer to vote for a Democrat in their district.

One other overlooked number from the last NPR/PBS NewsHour/Marist poll: Just 54 percent of Republican women who are registered voters said they were very enthusiastic about voting in this election. Compare that with 78 percent of Republican men who are registered voters. And where do a lot of those women live? The suburbs. If GOP women, an important group that Republicans need to bolster them, stay home, that's one way Democrats clean up in the House.

In the Senate, on the other hand, Republicans have a very favorable landscape and are competing in conservative states held by Democrats. The fundamentals favor the GOP in these states, and if Republicans win where they should win, they will hold the Senate.

What it would mean: This would be a huge win for Democrats, as they'd be able to gum up Trump's agenda and begin to investigate his administration, something the GOP has not done very much of. In the Senate, Republicans could still approve federal judges and Trump Supreme Court nominees, but if they want to get any big legislation done they're going to have to negotiate with Democrats in the House, and possibly a Speaker Nancy Pelosi.

Democrats feel they need to limit the losses in the Senate. If they can hold Republicans to net even, keeping the Senate at 51-49, or maybe lose a net of one seat, then they will be very happy. They have a much more favorable Senate landscape in 2020 and believe they will be able to take back the Senate then.

2. Republicans hold the House and Senate

This would be a huge win for the GOP.

How it would happen: A record turnout is expected Tuesday — perhaps higher than any time in the past 50 years for a midterm — but, as in 2016, Trump voters would have to dominate. Rural voters would have to turn out at higher-than-expected rates, causing the polls to be wrong (again). Meanwhile, young voters and Latinos would have to stay home. (It is supposed to rain on the East Coast Tuesday, which could depress low-propensity-voter turnout.)

All of those close House races would have to tip Republicans' way, something that's very possible given the conservative lean of those districts and the distrust of the media, purposefully stoked by the president. And who pays for polls for the most part? Big media organizations. 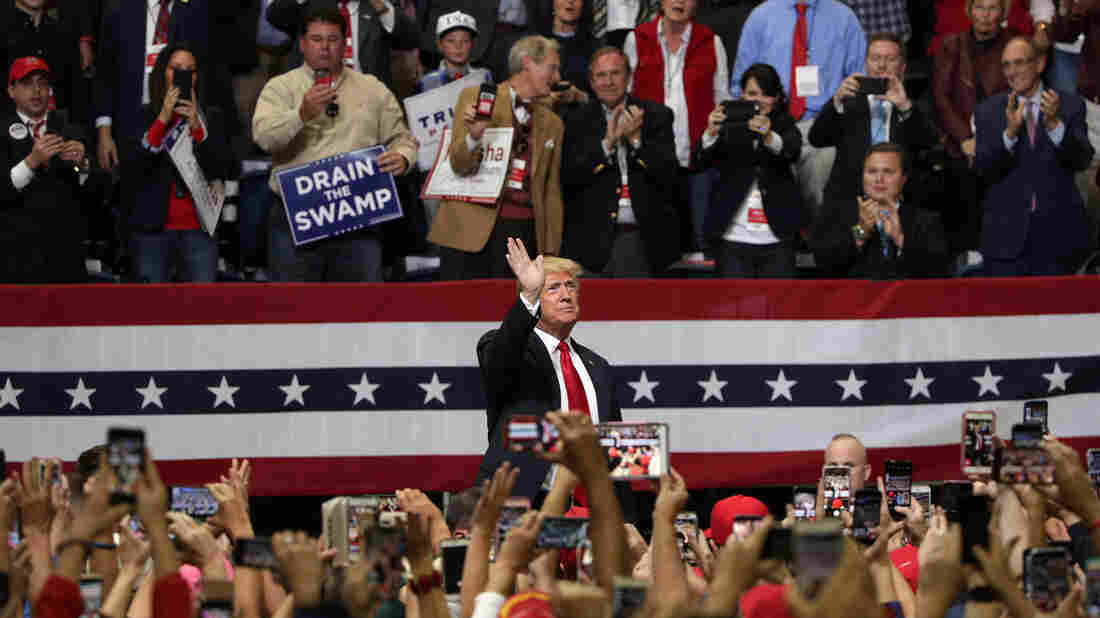 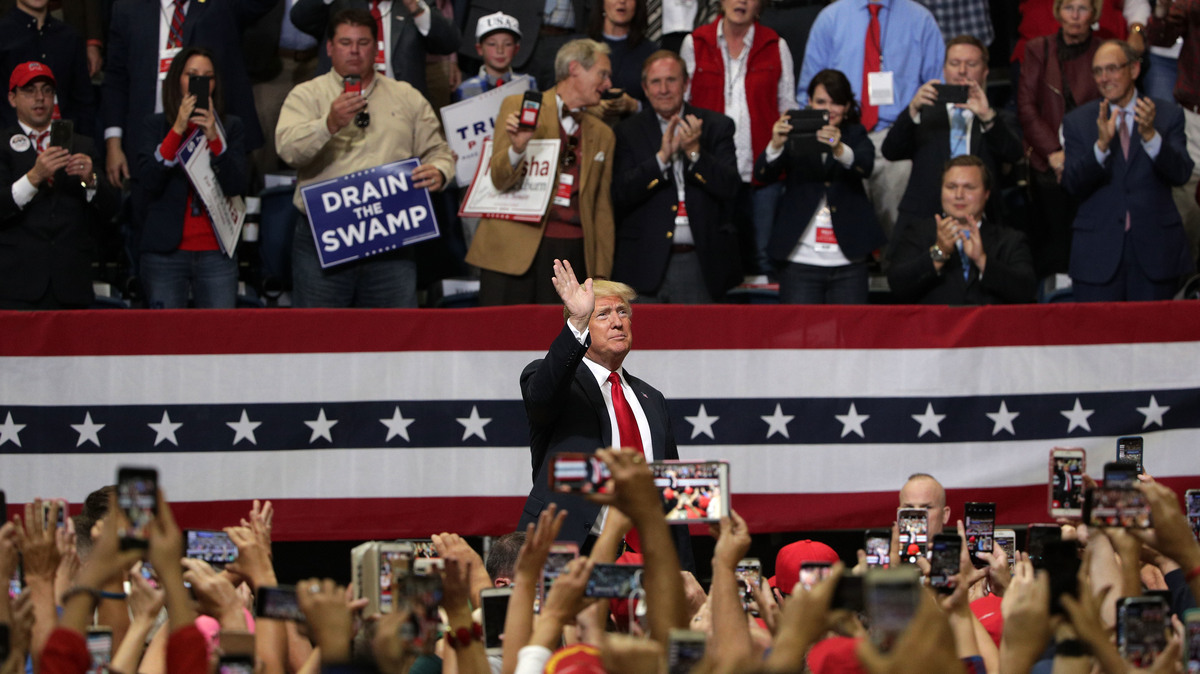 President Trump acknowledges supporters during a campaign rally for Rep. Marsha Blackburn, R-Tenn., and other Tennessee Republican candidates on Monday in Chattanooga, Tenn.

What it would mean: President Trump and Republicans would step on the gas, validated by an election cycle dominated by negative news coverage and polling that said the GOP had its back against the wall. The Affordable Care Act (aka Obamacare) would very likely be repealed once and for all. And Trump could set his sights on ousting Attorney General Jeff Sessions and other key figures at the Justice Department, possibly ending the department's investigation of Russia's attack on the 2016 election.

What's more, Trump's strategy of demonizing immigrants would have worked — again. That was rewarded, and what message would that send? He is only going to do more of it between Wednesday and November 2020 when he stands for re-election.

It would also be yet another reckoning for pollsters and media organizations that pay for the surveys. The polls currently show Democrats with a razor-thin, but consistent advantage heading into Election Day. But if the polls are wrong, it should induce more than a shoulder shrug from outlets that conduct them and the news media organizations that report on them.

3. Democrats win both the House and Senate

This is not seen as the likeliest of scenarios, but it's not out of the realm of possibility either. It would very likely mean a massive wave and a massive shift against Trump and Republicans tied to him nationally.

A lot would have to happen, especially in the Senate, for this to happen.

How it would happen: The path for Democrats in the House is through the suburbs, as in Scenario 1. That doesn't change. But for Democrats to pull this off in the Senate, not only would voters have to side with Democratic incumbents in conservative states, but Democratic challengers would have to win in places like Nevada and Arizona, and possibly Tennessee and Texas.

What it would mean: It would be a repudiation of Trump and the Republicans tied to him nationwide. It would have to trigger a degree of soul-searching — in at least some Republican corners.

Trump would be faced with the choice of moderating and working with Democrats or being a lame-duck president starting in January 2019 when a new Democratic Congress is sworn in — as talk ramps up about Democratic 2020 challengers.

It's very possible control of both the House and Senate will not be clear on election night. 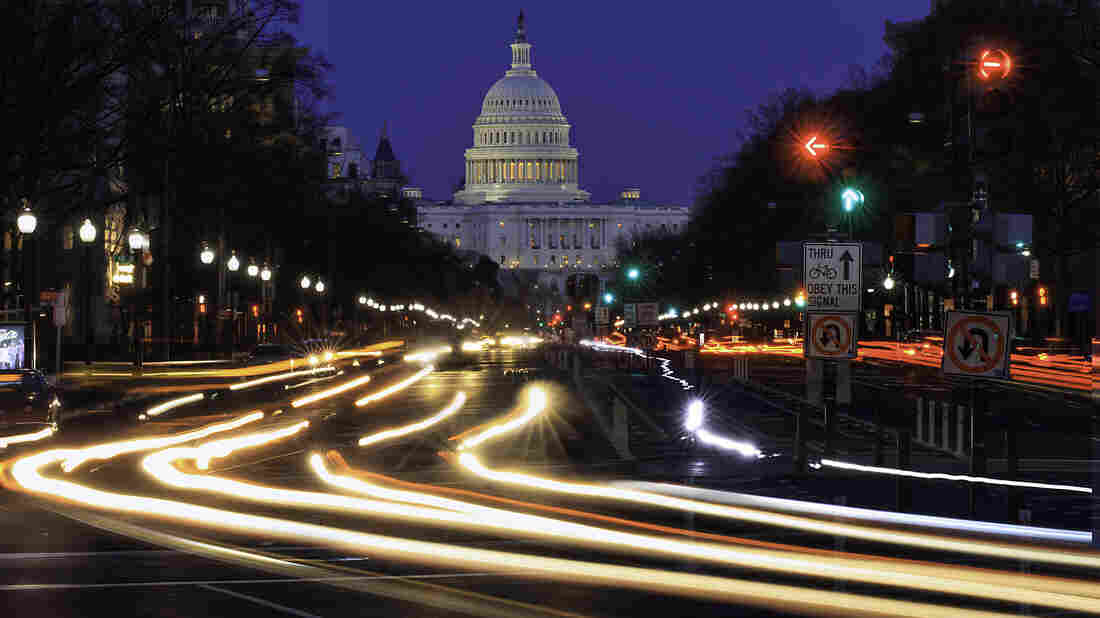 A number of races are so close that it may not be possible to declare a winner on election night, leaving control of the House and Senate up in the air. Joe Sohm/Visions of America/UIG via Getty Images hide caption 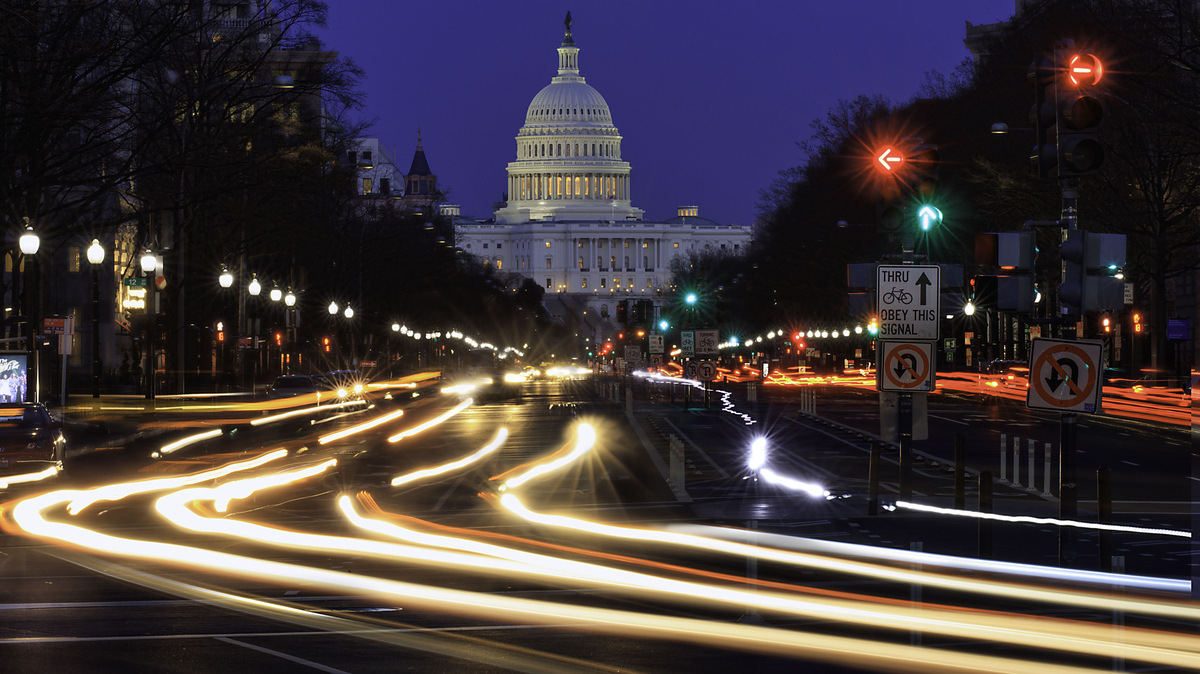 A number of races are so close that it may not be possible to declare a winner on election night, leaving control of the House and Senate up in the air.

How it would happen: There are a half-dozen congressional races in California, for example, that are very close heading into Election Day. It's possible those races are so close they will not be called on election night. They might not be called for days and possibly weeks later, especially because the vote there is counted slowly.

Additionally, early and absentee ballots can get counted slowly and there is growing concern that many voters' absentee and mailed ballots could be rejected. In 2016, to the surprise of many, 319,000 absentee ballots were rejected for one reason or another.

In the Senate, depending on how results from other races shake out, there is the possibility that control is not known on election night or for weeks after. Specifically, it could all come down to Mississippi. There, no candidate is polling above 50 percent heading into Election Day, and if no one gets at least 50 percent, the race heads to a runoff three weeks later.

What it would mean: Imagine a scenario in which Democrats lead 50-49 on Election Day in the Senate, and the eyes of the country — and the deep pockets of out-of-state money — descend on Mississippi. The consequences would be enormous, the rancor pitched and the tension thick.