Accessibility links
'King Kong' On Broadway: The Well-Over-800-Pound Gorilla In The Room In a new $35 million musical, the star attraction is 20 feet tall and requires 15 people to operate. He's an engineering marvel — and also basically a giant monkey puppet. 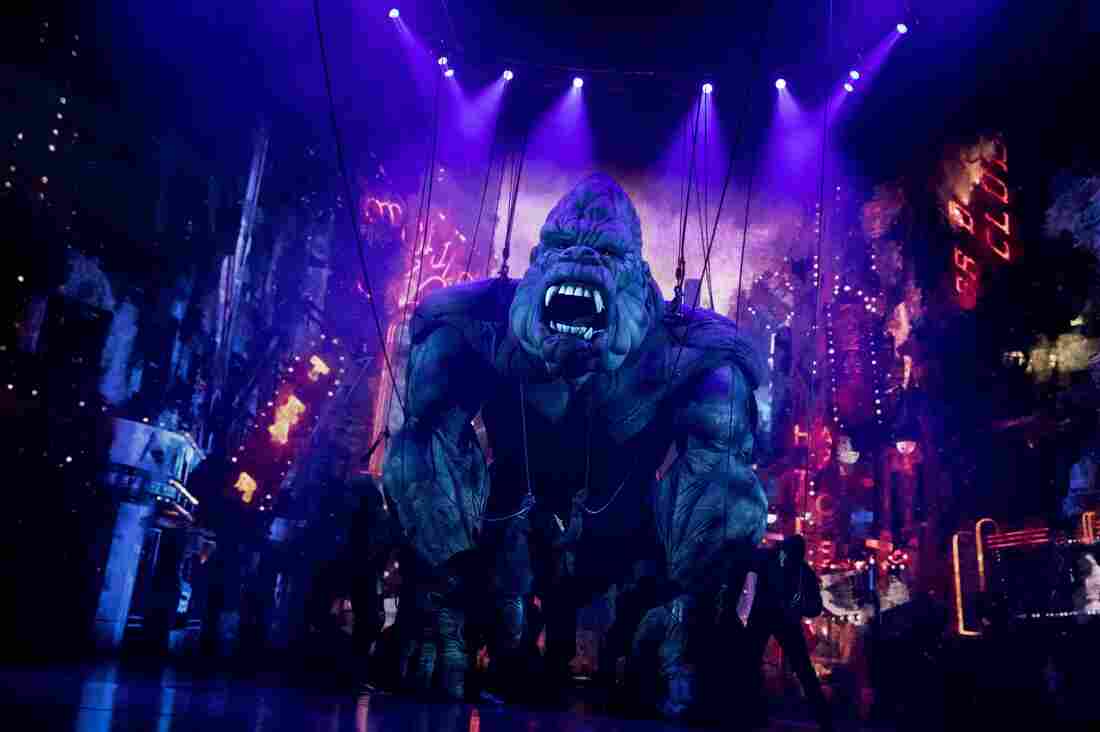 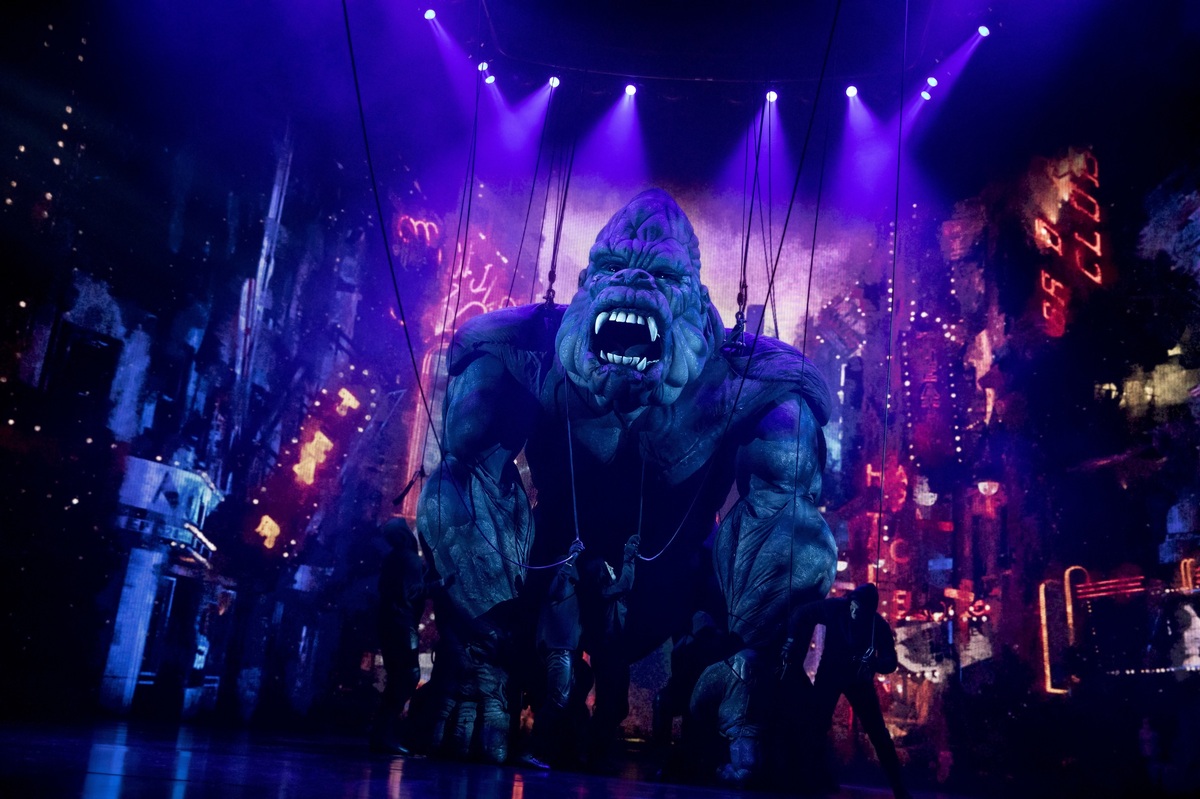 The new Broadway adaptation of King Kong features a giant puppet which requires 15 people to operate.

His name is King Kong.

The gigantic puppet is the centerpiece of a $35 million musical, based on the classic 1933 film. In some ways, King Kong is a typical Broadway musical — there are songs and dances and dialogue. But what the audience really wants to see is the giant ape.

He is quite big — when he stands upright, snorting and sniffing and roaring, he's two stories tall. And he feels alive.

While all the people who operate Kong call him a puppet, the creature, designed by Sonny Tilders, is a sophisticated hybrid. Jacob Williams, whose job title is Kong captain, says that it's a combination of "old-school and new-school puppetry."

The Making Of 'King Kong': Screams, Score And More

Let's start with the old school. Ten puppeteers are onstage moving the beast.

"They've got ropes down there which are connected to the wrist and the elbows, so they can move it," Williams says. "It's basically the oldest style of puppet — a marionette."

Khadija Tariyan is one of the puppeteers who operate Kong's legs, arms and torso on the stage.

"To be Kong, we are one with Kong," she says. "We wear these black hoodies, and we're all in black outfits, and we're for the most part quite hidden. And we — we're in a crouch position, so you don't necessarily always see us — we're almost like his shadows. And then there also moments in the show where we are able to come out and almost express his feelings, like when he's curious about something, we do have a little appearance." 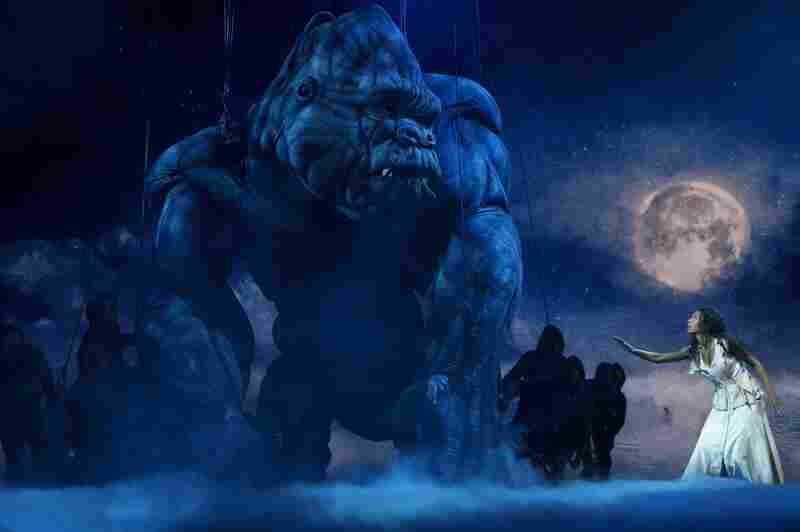 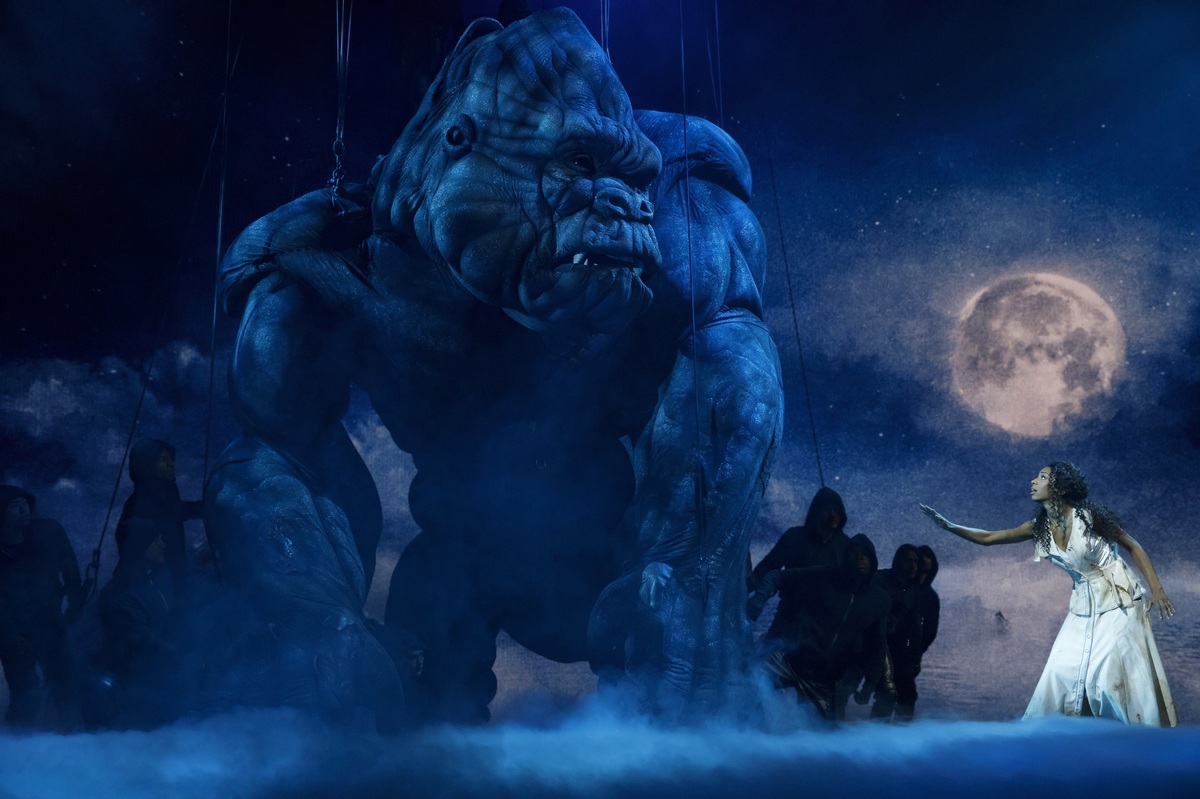 Ten puppeteers, dressed in all black, are required onstage to operate King Kong. The gorilla stars opposite Christiani Pitts, who plays Ann Darrow.

The stylized puppet is made of steel, Styrofoam and air-powered bags that resemble muscles, all held up by a 17-ton crane above the stage. But Kong is really heavy, and Tariyan is a petite person. So there's jumping involved.

"I do a launch off of his shoulder," she says. "The taller men can lift his hand up to a certain level. However, it takes our whole body weight to lift his 200-pound arm. So we climb up to his shoulder, and then we have different ways of grabbing onto a rope, and we launch off of it, which will then bring it higher than his head."

Part of what makes Kong feel so lifelike is his facial expressions. He can be curious, sad, ferocious. And that's where the new-school puppetry comes in.

High up in the balcony, three operators and a technician sit in a booth, watching the stage through a window and infrared monitor. They control Kong's face, head, neck and shoulders remotely. Each of them sits behind joysticks and foot pedals.

John Hoche is the head and neck operator, and also the voice of Kong.

"Well, Kong, he's an actor in our show, so he has lines," he says. "You know, grunts, grumbles, roars. They are set in the script. And my voice is modulated through a processor to make it kind of go from a 6-foot-1[-inch] person to a 20-foot tall gorilla."

"You know, we try to keep Kong alive whenever he's on stage, so even if he's sitting, there's still a little bit of motion," Hoche adds. "So, the puppet is never just inanimate onstage. There's always a breath of life in him."

Like in the original movie, there are set pieces: the first time King Kong comes out of the jungle, when he wrestles with a giant cobra, the sad ape in chains before he's put on display, the rampaging beast running through Times Square then climbing the Empire State Building. At some point, the audience starts to forget that it's watching a big puppet, says Kong captain (and shoulder operator) Jacob Williams.

"You tap into your imagination and you place a lot of the emotion on the puppet, as much as the puppeteers do," Williams says. "And it's this sort of connection and relationship that the puppeteers have to the puppet, then the puppet has to the audience. So it's this beautiful sort of dialogue which happens, and when it happens correctly makes a really special experience."

At the end of every performance, the last bow is taken not by the lead actors in the show, but the star — all 1.2 tons of him, and the puppeteers who bring him to life. King Kong opens Thursday night on Broadway.