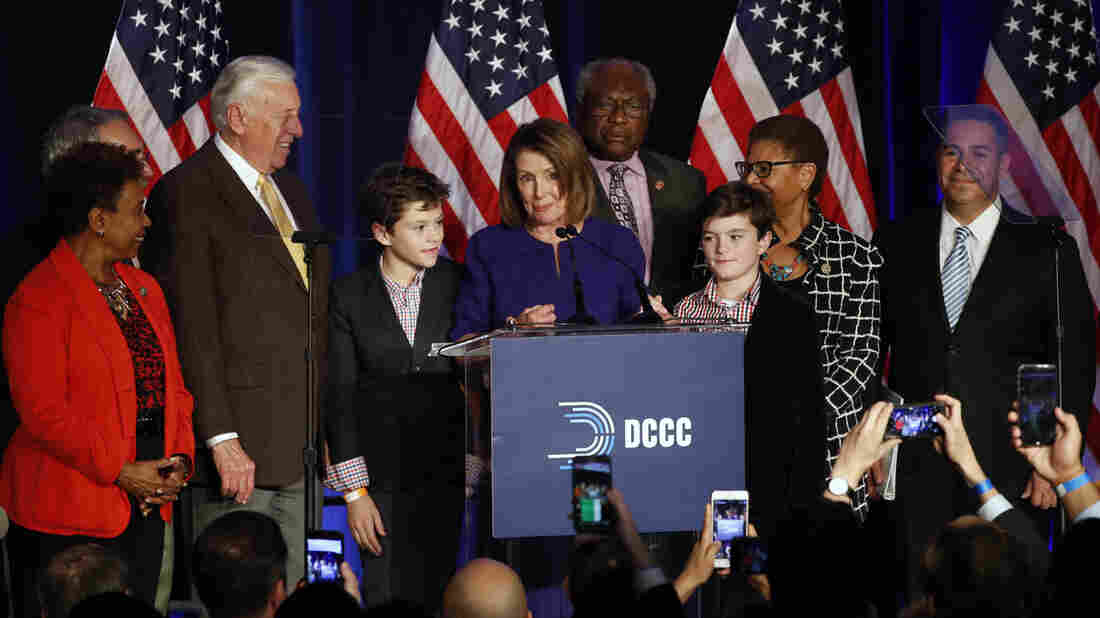 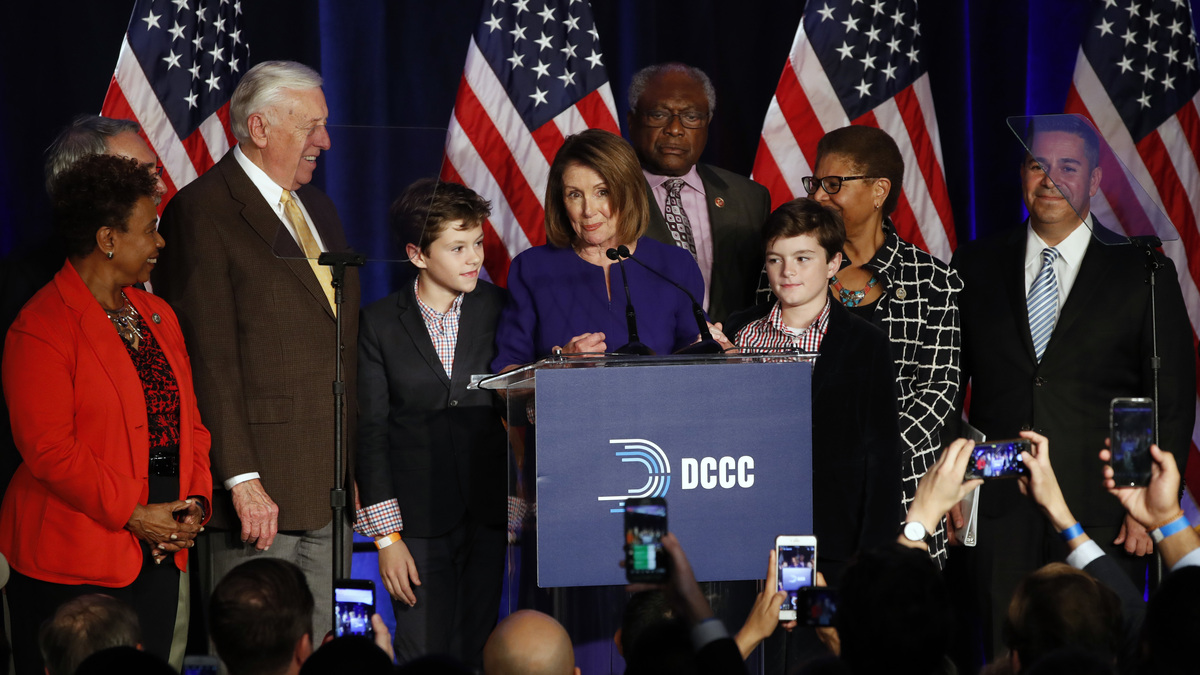 House Minority Leader Nancy Pelosi, D-Calif., celebrates the party's wins in the House of Representatives. Pelosi plans to run for speaker now that Democrats will control the House.

House Democrats are promising to start 2019 with a familiar pledge: They want to drain the swamp.

House Minority Leader Nancy Pelosi, D-Calif., who plans to run for speaker, announced Tuesday that Democrats plan to use their majority in the House to act as a check on President Trump and on corruption in Washington.

"We will drain the swamp of dark-interest money," Pelosi said to cheers from Democrats and supporters at an election night party near the Capitol on Tuesday. "The Democratic Congress will be led with transparency and openness so the public can see what's happening and how it affects them."

Pelosi said a vote on campaign finance reform legislation is at the top of the agenda.

While House Democrats could pass legislation to curb outside spending in campaigns and force disclosure of big donors' contributions, any bill on this issue is not expected to succeed in the GOP-controlled Senate. Senate Majority Leader Mitch McConnell, R-Ky., is a defender of the current system and will be focused on continuing to confirm Trump's judicial nominees.

Pelosi and other top House Democratic leaders say their other top responsibility is to oversee how Trump administration officials have managed federal agencies and changed government regulations. They also will launch a batch of investigations into Trump, his family and his business dealings.

Democratic committee chairs will have the power to call top Trump administration officials to appear at hearings to answer questions about their actions. They also can create special select committees to gather fresh facts on broader issues such as Russian interference in U.S. elections and how climate change policy has shifted since Trump took office.

Maryland Democratic Rep. Elijah Cummings, who is expected to ascend to the chairmanship of the House Oversight Committee, will play a key role in checking the Trump administration by conducting investigations of the executive branch's actions and policies. But anyone expecting an immediate, aggressive inquiry into the administration may be disappointed.

Cummings appears intent to reach across the aisle first — although he does want the president's tax returns made public.

"Congressman Cummings will try to conduct investigations on a bipartisan basis and attempt to use subpoenas only as a last resort," a Democratic committee aide told NPR. "He believes Congress and the American people should see the president's tax returns — which he promised to release — in order to evaluate his potential conflicts of interest, and he will work with the Ways and Means Committee to follow all appropriate procedures."

The tax-writing committee does have the authority to contact the Treasury secretary to request the president's tax records. But the administration is likely to fight any release.

Asked about the expected move by Democrats to obtain his returns, Trump waved it off Monday, saying he didn't care and added, "They can do whatever they want, and I can do whatever I want."

Rep. Jerrold Nadler, D-N.Y., who is expected to chair the House Judiciary Committee, tweeted on Tuesday night that the election results meant voters expected a Democratic House to ensure the president was held in check.

Tonight, the American people have demanded accountability from their government and sent a clear message of what they want from Congress. @realDonaldTrump may not like it, but he and his administration will be held accountable to our laws and to the American people. pic.twitter.com/EgVpwUWAJe