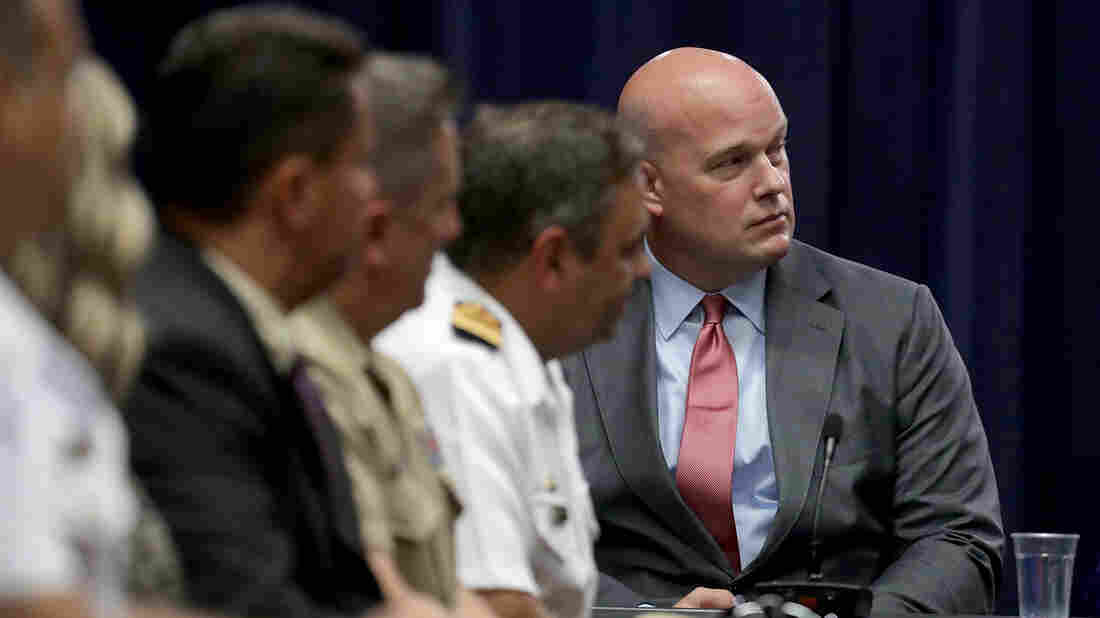 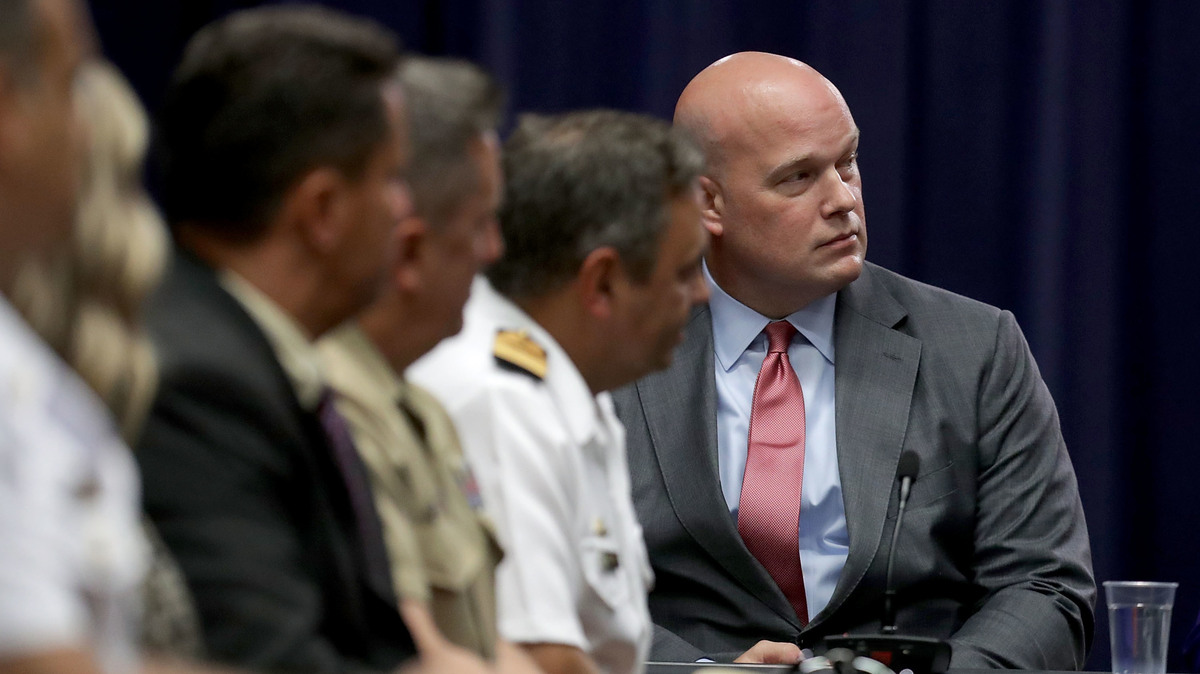 The biggest question in Washington is: Will he?

The acting head of the Justice Department took over on Wednesday from former Attorney General Jeff Sessions, who was forced out after months of verbal abuse by President Trump.

....We thank Attorney General Jeff Sessions for his service, and wish him well! A permanent replacement will be nominated at a later date.

"It is a true honor that the President has confidence in my ability to lead the Department of Justice as Acting Attorney General," Whitaker said in a statement Wednesday evening. "I am committed to leading a fair Department with the highest ethical standards, that upholds the rule of law, and seeks justice for all Americans."

Of Sessions, Whitaker added he "has been a dedicated public servant for over 40 years. It has been a privilege to work under his leadership. He is a man of integrity who has served this nation well."

Whitaker was Sessions' chief of staff and so he'll step into the job with a nearly complete working knowledge of the department — except for Mueller's investigation.

That's because Sessions had recused himself, calling it inappropriate that he lead an inquiry into Trump's 2016 presidential campaign of which he was a part. Mueller is looking into whether anyone on that campaign might have conspired with the Russians who attacked the 2016 election.

Now, though, Sessions is gone and the Justice Department says that means Whitaker's purview includes the special counsel's investigation.

Whitaker has not been a fan.

"Mueller has come up to a red line in the Russia 2016 election-meddling investigation that he is dangerously close to crossing," Whitaker wrote in an op-ed last year before he came to work for the government.

He called for Deputy Attorney General Rod Rosenstein, who appointed Mueller and who has been supervising his work, to curb the investigation.

Now Whitaker is in charge of the Justice Department and Rosenstein reports to him, putting Whitaker in a position to constrain the special counsel if he wishes or if he's directed to do so by the president.

Trump has made clear that he believes he has the power to fire Mueller altogether, through the leadership of the Justice Department or outside it. The president's lawyers have argued he has vast privilege under the Constitution to hire or dismiss nearly anyone within the executive branch.

Trump asserted that again on Wednesday in a press conference at the White House in which he suggested the only reason he hasn't already ousted Mueller is because it might make him look bad.

Mueller's inquiry is a "hoax," the president said, and asked why, if it's supposed to find "collusion" between his campaign and the Russians, it hasn't found any.

"I could fire everybody right now," Trump said. "But I don't want to stop it because politically, I don't like stopping it."

If that stands, there are other ways that Trump and a newly simpatico attorney general could complicate Mueller's work.

One is simply by declining to continue to pay the investigators or attorneys working for the special counsel. Or by re-assigning them back to their previous jobs in the FBI and the Justice Department or the intelligence community.

Another way is by constraining the authority that Mueller and his office have to conduct the investigations they want.

Rosenstein, for example, has explained to Congress how closely he supervises the work done by Mueller and his team.

When the special counsel's office wants to issue a subpoena or send investigators or call witnesses before a grand jury, the deputy attorney general is often involved. If the new leadership at the Justice Department didn't want to go along, however, that could constrain Mueller's ability to investigate as he sees fit.

And, if nothing else, having an attorney general who isn't recused from Mueller's work might give the White House a clearer look inside it.

The new acting attorney general or whoever serves as his fulltime replacement could simply brief Trump and his aides on where the special counsel is focused if the president doesn't know already.

Whitaker so far hasn't said much about his outlook for the Justice Department or the special counsel investigation; Rosenstein hasn't spoken publicly either since Sessions' dismissal.

Critics, however, are calling on Whitaker not to take the reins. Democrats cited his past comments about Mueller as evidence that he too must recuse.

"Given his record of threats to undermine & weaken the Russia investigation, Matthew Whitaker should recuse himself from any involvement in Mueller's investigation," House Minority Leader Nancy Pelosi, D-Calif., said on Twitter. "Congress must take immediate action to protect the rule of law and integrity of the investigation"

Given his record of threats to undermine & weaken the Russia investigation, Matthew Whitaker should recuse himself from any involvement in Mueller’s investigation. Congress must take immediate action to protect the rule of law and integrity of the investigation. #FollowTheFacts

Pelosi is set to become speaker of the House when Democrats are seated with their new majority in the incoming Congress. She and the House intelligence committee's incoming chairman, Rep. Adam Schiff, D-Calif., have said they want to help protect Mueller and launch investigations of their own into Trump.

Whitaker is a former U.S. district attorney and Division I football player who has been a longtime supporter of Trump and his allies.

Before he became Sessions' chief of staff, Whitaker was an accomplished athlete and attorney in Iowa. In college, he started at tight end for an Iowa Hawkeyes football team that played in the 1991 Rose Bowl.

He served as the U.S. attorney for the Southern District of Iowa from 2004-2009, and was well respected in Republican circles in the state, according to the Des Moines Register.

He was the co-chairman of former Texas Gov. Rick Perry's 2012 Iowa campaign for president, and campaigned himself for the Senate seat opened by the retirement of Democrat Tom Harkin. Whitaker garnered more than 11,000 votes in the primary, which he lost to Joni Ernst who went on to win election to the Senate.

He also worked on an earlier campaign in Iowa for one of Trump's presidential campaign leaders, Sam Clovis, who has figured in the Russia investigation. Clovis is believed to be one of the campaign officials who talked with a junior aide, George Papadopoulos, about the overtures Papadopoulos was getting from Russians in London.

Whitaker's views as an outside commentator before joining the government have been music to the ears of Trump and Republicans. He's been an advocate for sharply restricting the avenues down which Mueller's investigators can travel, as when he responded to reports that Mueller might be looking into Trump's financial relationships with Russians.

Experts say, however, that any investigation into the role foreign countries play in domestic politics must delve down financial rabbit holes.

"[Mueller's team is] looking for ties, they're looking for relationships, and a lot of that will come down to money trails," Jennifer Rodgers, the former executive director of the Center for the Advancement of Public Integrity at Columbia Law School, told NPR last year.

And separately, two years ago, after then-FBI Director James Comey announced he would not recommend charges against Democratic nominee Hillary Clinton for her use of a private email server, Whitaker penned an opinion piece for USA Today headlined "I would indict Hillary Clinton."

"Director Comey's judgment was that "no reasonable prosecutor" would bring the case. I disagree," Whitaker wrote. "I believe myself to have been a reasonable prosecutor, and when the facts and evidence show a criminal violation has been committed, the individuals involved should not dictate whether the case is prosecuted."