Accessibility links
Emel Mathlouthi Is The 21st Century's Catalyst For Change Her song soundtracked the Arab Spring, but Mathlouthi isn't interested in being seen as an exotic activist whose art is secondary to a message. Her music is adventurous, bold and entirely modern.

Emel Mathlouthi Is The 21st Century's Catalyst For Change

Emel Mathlouthi Is The 21st Century's Catalyst For Change 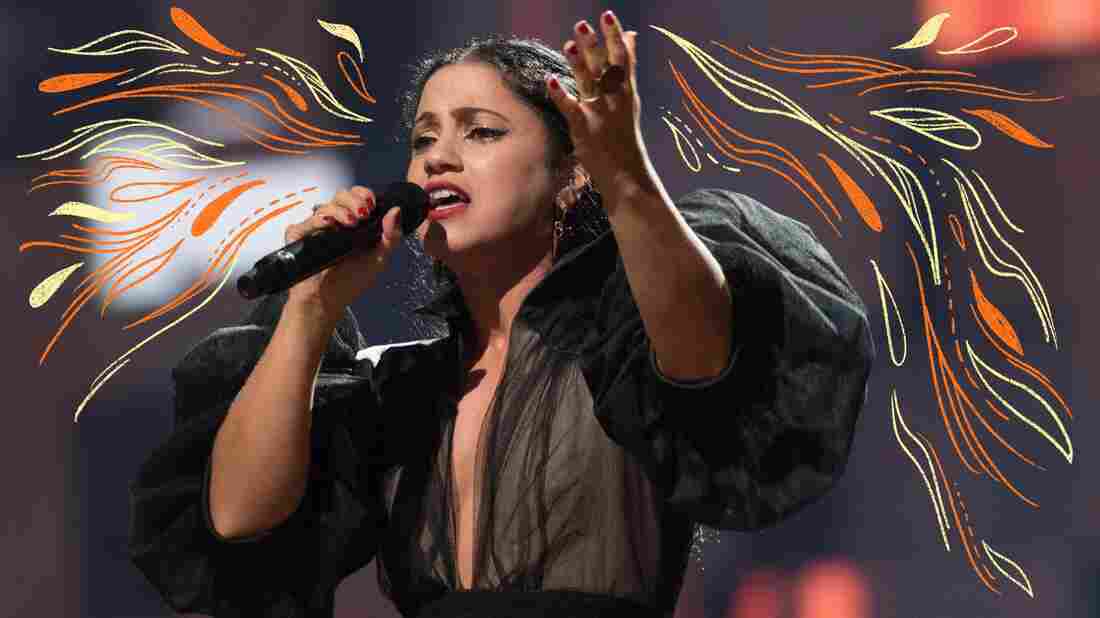 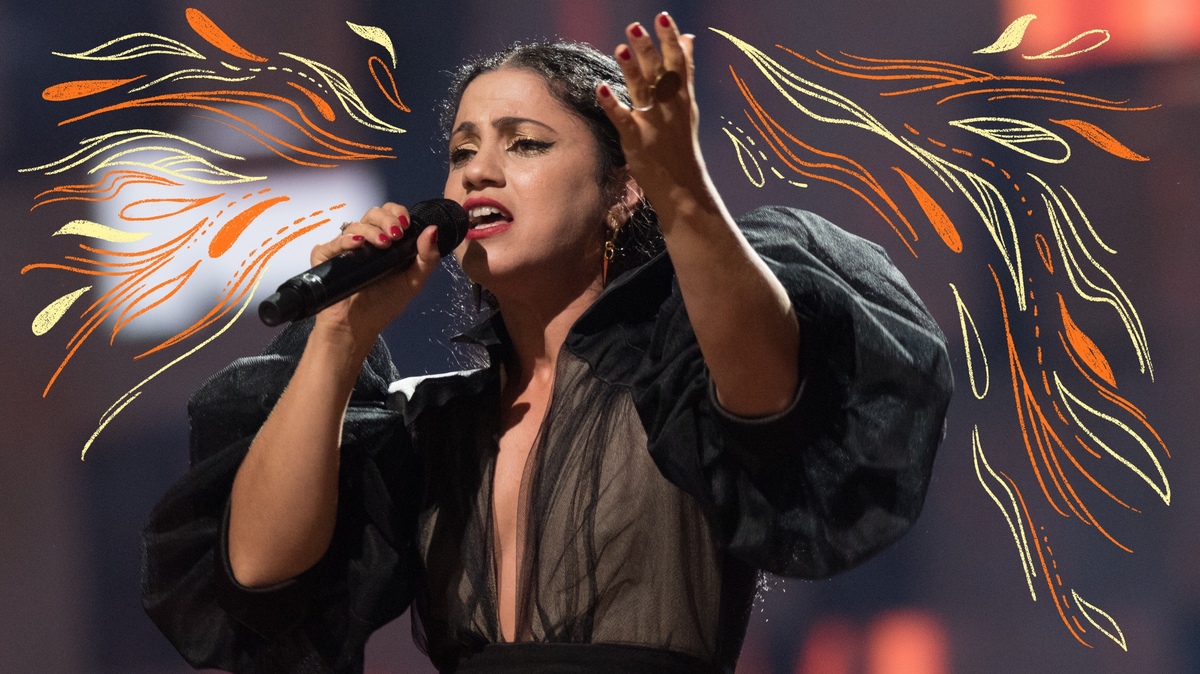 Emel Mathlouthi isn't interested in being a nice girl. She isn't fond of being typecast as an exotic North African. And she positively bristles at being labeled as an activist whose music and art are ancillary to a message.

But for people who still haven't heard the Tunisian-born singer — an artist who grounds her honeyed vocals in heavy, distorted electronics, and whose theatrical stage presence and arresting visuals call to mind the likes of Kate Bush and Björk — it's still useful to know how she rose onto stages across the world and become an anthemic voice during the Arab Spring.

Now 36 years old, Mathlouthi began singing while she was still a child growing up in the suburbs of Tunis, Tunisia's capital city alongside the Mediterranean coastline. By the time she was in college, she was fronting a metal band. (Mathlouthi possesses a sweet, high voice, but woe to anyone who misreads those qualities as fragility or weakness.) Soon, she was writing songs that were deeply critical of the government of the then-leader of Tunisia, Zine El Abidine Ben Ali. In 2008, she moved to France, convinced that her career would founder if she stayed in her native country.

Mathlouthi knew that she was running right up against the strictures of the regime but she persisted — and kept right on singing about Tunisia and about oppression. Certain Tunisian DJs would try to sneak her songs onto their playlists at odd hours, but by the time she began singing "Ya Tounes Ya Meskina" [Poor Tunisia], with lyrics like "Fear resides in their bones, being mute is their lot" — the die was cast.

The song that tipped her over the edge, though, was "Kelmti Horra" [My Word Is Free]. With lyrics by the young Tunisian poet Amine al-Ghozzi, "Kelmti Horra" is a declaration of independence, a statement of hard-earned liberation. "I am those who are free and never fear," she sings, her voice ringing with certainty. "I am the secrets that will never die, I am the voice of those who would not give in, I am the meaning amid the chaos."

Years before crowds of Tunisians took to the streets to protest widespread corruption, political repression, high unemployment and endemic poverty, Mathlouthi had already been singing "Kelmti Horra" every chance she could get — she ended every concert with it in both France and Tunisia, to which she returned occasionally, performing at underground shows while word of her music spread largely on social media. (She had already been prohibited from performing at music festivals in her home country, and "Kelmti Horra" was banned outright.)

Mathlouthi was in Tunisia for one of those illicit tours when a despairing street vendor, Mohamed Bouazizi, set himself on fire on Dec. 17, 2010 — a pivotal moment that sparked what became first Tunisia's Jasmine Revolution, and then, in a string of regional uprisings, the Arab Spring.

"Kelmti Horra" had already become a well-known song in the Tunisian underground by then. But finally, on one remarkable January day just weeks after Bouazizi took his desperate step, Mathlouthi stood up in a crowd of demonstrators along the packed Avenue Habib Bourguiba — the largest boulevard in Tunis — to sing her signature song. The ground was already shifting under everyone's feet: Within days, President Ben Ali and his family had fled the country.

But on that day, in the midst of the protests on Habib Bourguiba, Mathlouthi sang "Kelmti Horra" a cappella, media cameras and microphones shoved hastily in front of her, while the protesters immediately around her listened in rapt silence. And she sings, you can hear the bristling energy of other demonstrators shouting slogans in the distance, in what becomes a strangely beautiful polyrhythm of revolution. And soon, "Kelmti Horra" was a song known and loved across the Middle East, as young activists began to imagine new futures for themselves, unbounded by the strictures and stiflings of the past.

That one song made Mathlouthi an international star; four years later, she was invited to sing it at the Nobel Peace Prize concert in a lush, big-stringed, grand arrangement that in its cinematic scale is, frankly, far less stirring than that badly shot video taken on Avenue Habib Bourguiba.

Her first album, 2012's Kelmti Horra, was released in the heady aftermath of the Tunisian revolution. As a collection of songs that she had been working on for years, it was a strong articulation of her talents, but it only hinted at the direction in which she was heading — towards brave, clear-eyed sonic experimentation, and away from an earnest folkiness that could render her as nothing more than a Joan Baez imitator. She feared, too, that she would come to be defined by the Jasmine Revolution — as though she could not exist, artistically, without that context. ("Activist music is very boring, actually," she told Pitchfork in 2016; in an interview earlier this year with Arab News, she was perhaps even more eager to leave 2012 behind, saying: "That was all a long time ago.")

Now, Mathlouthi faces even more crosscurrents to navigate in an endless push-and-pull: She's a North African artist, trying to make her way in a larger world in which musicians of Arab and North African descent are still routinely either exoticized, otherized or utterly ignored. She doesn't make folkloric music, neatly packaged and pressed for consumption as "world music," because that's not at all what interests her — and neither does the hyper-commercial Arab pop music scene. And in interviews, she still talks — with just a trace of perceptible bitterness — about the "good girl" tropes that she had to escape in order to find herself as a musician. (A good girl wouldn't sing metal; a good girl wouldn't get herself in trouble with a government; a good girl would be content with the fame she had found.)

It was only with the release of her second album, 2017's Ensen [Human], and its companion album of reworkings, 2018's Ensenity, that Mathlouthi made her path more clearly stated, and her destination explicit. Now based in New York City, she recorded Ensen in seven different countries, enlisting globally in-demand producers like Valgeir Sigurðsson (the founder of Iceland's Bedroom Community label, and a collaborator of Björk, Brian Eno, Sigur Rós, Bonnie "Prince" Billy and many others) to work with her and her primary recording partner, producer Amine Metani.

And instead of putting her work on a niche label that specializes in global artists — still the default in North American markets when an artist's native language isn't English — she has a deal with Partisan Records, which has released albums by Torres and Deer Tick. ("I got tired of always having that stamp," Mathlouthi told Pitchfork. "As soon as the indie and electronic labels hear Arabic singing, they say: 'Oh OK, world music.'")

She hasn't left her past behind; instead, she pushes it into new terrain. The sound of Ensen references Tunisia, with instruments like the buzzy guimbri bass lute, the husky-voiced zukra flute and North African percussion — but she uses those elements as part of a much wider sonic palette on tracks like the urgent, propulsive "Ensen Dhaif" [Helpless Human] and the dark swirls of "Thamlaton" [Darkness]. And she pulled even more collaborators into the Ensenity project, enlisting the likes of producers like Ash Koosha, Vladislav Delay and Free the Robots to reframe the tracks.

As much as she resists being defined by her socially conscious work, Emel Mathlouthi still offers clarion calls to action, both for fellow artists of her generation and for those who are following in her wake. In 2014, Mathlouthi was one of the featured performers in an insightful documentary called No Land's Song. The film chronicles the quest of a young, female Iranian composer named Sara Najafi. Najafi's goal was to mount a public concert in Tehran featuring solo female singers, a concept banned in Iran since the 1979 revolution. One of the artists to sign on this arduous adventure was Mathlouthi — whose work during the Tunisian revolution was one of Najifi's foremost inspirations. And it's work, Mathlouthi's fans around the world hope, that will remain a catalyst for generations to come.