Accessibility links
In Netflix's War Epic 'Outlaw King' There's Plenty Of War, But Not Much That's Epic Director David Mackenzie (Hell or High Water) keeps the scale too small and the stakes too low in this retelling of the rebellion of Scotland's Robert the Bruce (Chris Pine).

In Netflix's War Epic 'Outlaw King' There's Plenty Of War, But Not Much That's Epic

In Netflix's War Epic 'Outlaw King' There's Plenty Of War, But Not Much That's Epic 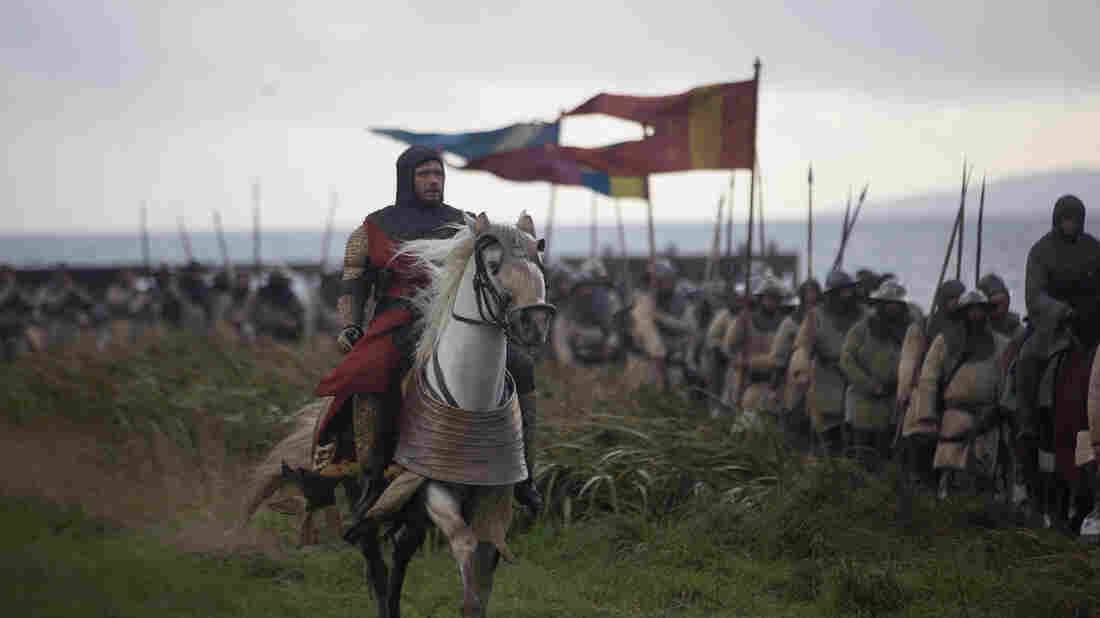 William Wallace is dead. His head has been kebob'd on a pike as fly food, and his limbs have been scattered throughout Scotland to serve as a warning to any other would-be rebels thinking of spiting the British throne. This is Year 1304, lords and ladies. No messing around. Whatever you might know about Scotland's most famous revolutionary, perhaps gleaned from a certain 1995 historical action epic as inescapable as a wee chill on a fall Highlands day, know ye this: Netflix's expensive new war film Outlaw King is not telling THAT guy's story.

For director David Mackenzie (Hell or High Water), dispatching Wallace quickly is a cheeky way to tip his hat to Mel Gibson's Braveheart, the only movie anyone is going to think about when they see grizzled, shouty swordsmen in kilts. Outlaw King, then,is that film's de facto sequel, following the journey-in-exile of Robert the Bruce, who succeeded Wallace as a co-Guardian of Scotland until he mounted another, successful rebellion in his stead. Braveheart, which is getting its own Bruce-led sequel next year,depicted the man as a milquetoast heel-turner who ultimately sees the error of his ways. So think of his new, nobler incarnation, who bravely wards off the British to assert his claim to the Scottish throne, as a rehabilitation effort.

Glaring at the head of the army as Bruce is Chris Pine, solidly in the middle of the pack of Hollywood Chrises. His inoffensively bearded face and chiseled body (which gets fully nude for a bathing scene) stand out among men who must wear chain-mail hoodies to hide their terrible haircuts, but he projects so little authority as king that even he seems surprised when different clans pledge their loyalty to him. As Bruce's nemesis Edward, Prince of Wales, who only knows how to attack Scots when they're tied up, Billy Howle has to dip pretty low to make his sniveling wimp as unappealing as possible in contrast.

Outlaw King begins after the Battle of Falkirk, as King Edward I (Stephen Dillane from Game of Thrones, doing his usual Stannis Baratheon) has vanquished the would-be Scottish army. His Royal Highness cements this victory by firing a catapult, the climax of a flashy long take that serves to humiliate Bruce and his fellow rebels in front of their captors. Ordered by the King to share Scottish affairs with his rival John Comyn (Callan Mulvey), Bruce instead kills Comyn in a church, beginning a march across the country to round up supporters. He also gets an arranged marriage to Elizabeth de Burgh (Lady Macbeth's Florence Pugh), but don't worry: there's a scene of her verbally consenting to their union before the two shed their tunics in a dimly lit tent.

After a while of ransacking castles and slitting throats, the warring parties come to a head at the Battle of Loudoun Hill, where some nifty trenches come into play. It's a respite from the colorless action scenes that dominate the rest of the film, which fail to communicate much in the way of stakes or allegiances. Sometimes it's good to know a man's heart before he's sliced open and shows it to you.

After premiering to snoozes at this year's Toronto International Film Festival, Mackenzie has gutted nearly 20 minutes from his film, not unlike the Prince of Wales gutting piles of entrails from Bruce's allies once he captures them. (This movie is very bloody.) The new cut is lean, and moves well, though neither Mackenzie nor his four credited co-writers manage to bang out a halfway insightful angle on a familiar story. It might explain why Hollywood doesn't make big history epics like this anymore: If there's nothing left to say about them, why bother to rent all those fields and train all those expensive horses?

Swallowing any revulsion for Mel Gibson, watching Braveheart today shows what made it such a hit with audiences 23 years ago. The film expertly juggles a sweeping, mythical scope; big hero/villain archetypes that played to the rafters; a whiff of old-fashioned martyrdom; and an ideology that had little to do with Scotland but everything to do with chasing a larger, sketchier pursuit of freedom (or, as Wallace says, "Freeeeee-dom!"). Outlaw King fails to become the rightful heir to this throne, because it never goes big enough. Bruce's men wage their campaign in shadows instead of shouting their principles to the skies. They're largely humorless, and their victories are tactical but not very symbolic. Bruce's reputation may be restored, but our reasons for caring about it are not.