Accessibility links
South Sudan's Peace Agreement: Will It Stick? After years of devastating civil war and broken peace deals, South Sudan is at a crossroads again. While many displaced refugees are still afraid to return home, others see big reasons for hope. 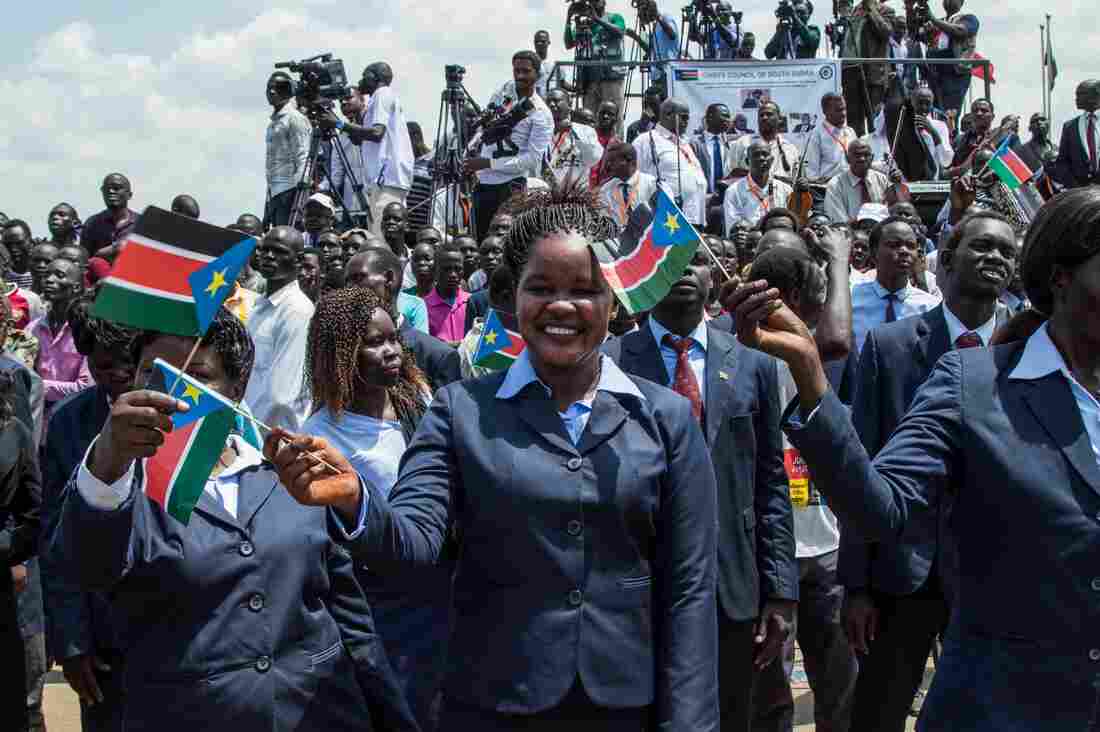 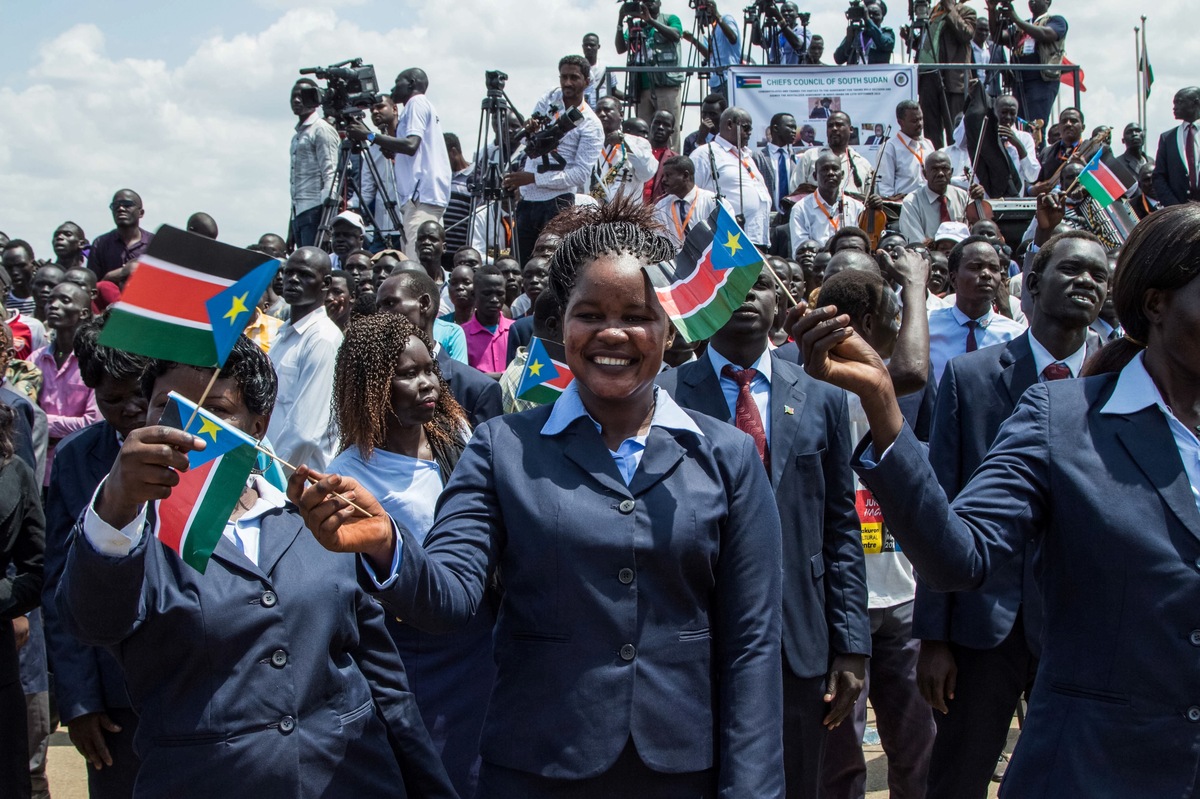 People waved the national flags of South Sudan during a peace ceremony in the capital city of Juba last Thursday. South Sudan rebel leader Riek Machar returned to Juba after two years of exile, saying he had come bearing a message of peace.

Tens of thousands of South Sudanese cheered, paraded and danced around the grounds of the John Garang Memorial Park in the capital city of Juba last week, celebrating a fresh peace deal. It was a striking change of mood for a country that has seen little joy in the past five years, ripped apart by a civil war that has displaced millions and left hundreds of thousands dead.

Rebel leader, Riek Machar, who once served as the country's vice president, had flown back from exile and took the stage last Thursday along with South Sudan's president, Salva Kiir. The arch rivalry between these two men has fueled the civil war in South Sudan.

But suddenly, and without much buildup, these battle-hardened foes walked up to each other during the peace ceremony, shook hands and smiled.

"I want to reiterate that the war in South Sudan has come to an end," Kiir declared. He promised that he has forgiven Machar and that Machar has forgiven him. "To forgive," he told the crowd, "is not an act of cowardice. It is a Christian obligation."

Still, South Sudan has been in very similar circumstances multiple times, over the years, and each time, without fail, peace deals and ceasefires have crumbled. So, amid the ebullience, an uncomfortable question remains: Will this peace deal be any different?

Kiir insists yes — this time, peace will stick. South Sudanese are tired of war, he says, and foes have for the first time come to an agreement of their own free will.

To underscore his resolve, the president ordered the immediate release of two of South Sudan's most prominent political prisoners: James Gatdet, a former spokesman for Machar, and William Endley, a former colonel in the South African military who served as an adviser to Machar and spent more than two years in prison because of it.

A history of broken peace deals

In 2011, after a brutal war for independence from Sudan, South Sudan became the world's newest nation. It didn't take long, however, for President Kiir to accuse his first vice president — Machar — of fomenting a coup. By 2013, the new country was embroiled in its own civil war.

The international community stepped in and brokered a peace deal in the summer of 2015. In essence, the deal called for all belligerents to return to their barracks and for Machar, who had been forced into exile, to once again become vice president.

To jubilation, Machar returned to South Sudan's capital city in the spring of 2016. But, by summer of that year, war broke out again in Juba and Machar was again forced into exile.

To Lauren Blanchard, who studies South Sudan for the Congressional Research Service, Machar's return last week felt a lot like 2016.

"I'm not optimistic about this deal," Blanchard says. The deal is vague, she points out, in terms of how security will be maintained in the capital once Machar returns for good next spring. And it's not clear what role the United Nations peacekeeping mission will play, or how the guarantors of the deal — Sudan and Uganda — would enforce it.

One of those groups, the South Sudan Opposition Alliance (SSOA) is led by Thomas Cirilo Swaka, a general who defected from the government. SSOA controls swaths of the country, including some urban territory, and has refused to sign the deal.

"We long for peace but we want a genuine peace," says Kwaje Lasu, the spokesman for the SSOA. "Right now, nothing has changed. The cessation of hostilities has been violated left and right — and we will exercise our right to protect our territory."

The current peace deal only addresses the conflicts among the elites, Lasu says, and doesn't take on the bigger issues — especially "justice and accountability." Even though Kiir has declared peace in South Sudan, Lasu points out, the millions of people displaced from their homes don't trust that it is safe to return.

Aly Verjee, who served as an adviser on the 2016 deal and is now a researcher at the United States Institute of Peace, says that trust and tolerance will be key to any lasting peace.

He says beyond the minutiae of this deal (such as the deadlines for when Machar will become vice president again), a big test for lasting peace will be whether there truly has been an underlying change in attitude. Will the government, for example, now tolerate differing views? Or will the ruling leaders arrest or kill someone for expressing a critique?

"A lot of good sentiments [have been] expressed," Verjee says. "And the indications of a change are there."

If there is anyone who has a right to be wary of the prospect of peace in South Sudan, it is William Endley, the South African adviser to Machar who, along with the rebel leader's former spokesman, James Gatdet, spent more than two years in prison.

In a lot of ways, Gatdet and Endley had become symbolic of the conflict in South Sudan. When the previous peace deal collapsed in 2016, they were the spoils — captured, charged with treason and then, earlier this year, sentenced to death by hanging.

But last week, the two men were pardoned by President Kiir. And two days after his conciliatory speech they were both released.

Gatdet was flown to Khartoum and Endley was deported to South Africa.

I reached Endley by phone in Cape Town. He says he remains "optimistic" about the chances for lasting peace.

Machar first hired Endley because of his experience helping to integrate the South African Defense Force. Back in 2016, after the signing of the old peace deal, Endley was in Juba advising Machar about how South Sudan's disparate forces might come to some reconciliation.

But Endley had only been in Juba weeks when he saw the collapse of the 2016 peace deal and watched as Machar was driven out of the capital and into exile.

Today, Endley says, the atmosphere around the current peace agreement seems totally different to him. Back in 2016, he says, "tension was in the air" the minute Machar landed in Juba.

"It was only a question of time before something happened," he says.

In contrast, the leaders and the people of South Sudan today seem to have a clear-eyed view of the "harsh reality" of their country, Endley believes.

'Other Nobel' Goes To Amazingly Humble Surgeon In South Sudan

The civil war that lasted more than five years has displaced millions of people and killed hundreds of thousands. It has decimated the country's oil infrastructure. And 6.1 million people — more than half the population — don't have enough food. Also, the leaders at the center of this conflict have lost legitimacy on the world stage.

So, Endley believes, the leaders and the people may now understand that peace is the only viable alternative for the country's survival.

To him, this feels like rock bottom, and the perfect time for everyone to come clean: acknowledge the killings and overreactions, release political prisoners and begin reconciliation.

"I believe ... the actual truth needs to come out now — and the healing process can start properly," Endley says. "Because, you know, bad news does not get any better with time."

Endley's stint in the Blue House, South Sudan's notorious national security prison, actually imbued him with even more hope for the future of the country, he says.

"You know, the average South Sudanese is the reason I'm still alive, still capable of talking," Endley says. "My health is improving because of my fellow detainees and some of the people inside the Blue House who took care of me — when I was, literally, busy dying more than once on the floor. So I am very positive about South Sudan."

And, if he is ever given the chance, Endley says, there is no doubt in his mind — he will return.