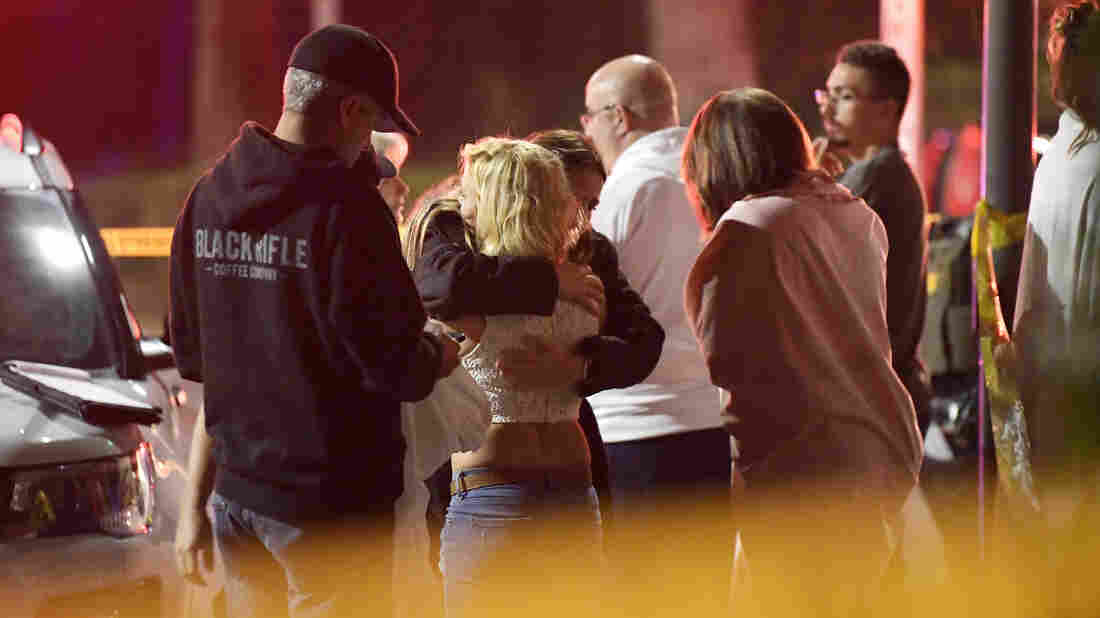 People comfort each other outside the Borderline Bar & Grill in Thousand Oaks, Calif., where a gunman opened fire and killed 12 people. Mark J. Terrill/AP hide caption 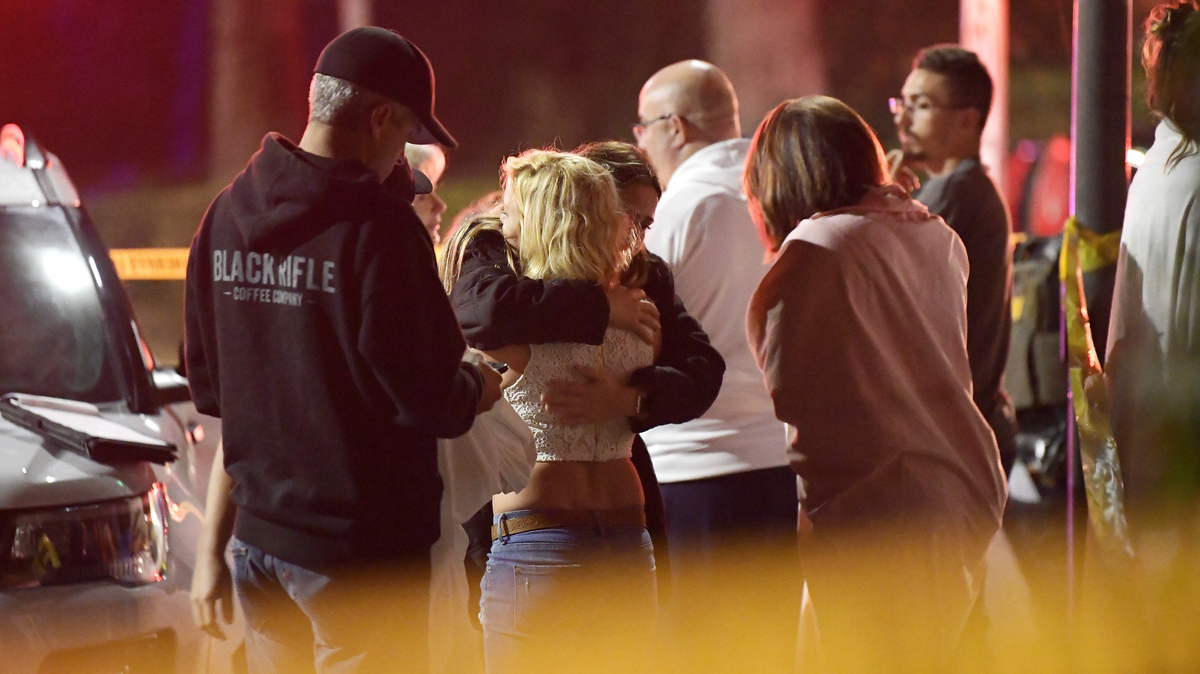 People comfort each other outside the Borderline Bar & Grill in Thousand Oaks, Calif., where a gunman opened fire and killed 12 people.

The dead include Sgt. Ron Helus, a 29-year veteran of law enforcement who went into the nightclub within minutes of receiving an emergency call. As many as 15 people inside the bar were injured, and one person had a minor gunshot wound.

Police say Ian David Long, 28, was the gunman and that he was found dead inside the venue. He had previously had minor encounters with the police, Ventura County Sheriff Geoff Dean said at a news briefing Thursday morning.

Authorities were still trying to determine a motive for the shooting.

Long's body was discovered in an office near the entrance to the Borderline, the sheriff said, adding that "we believe he shot himself" after an initial exchange of gunfire with law enforcement officers. Dean also said the shooting inside the club stopped after Helus and a Highway Patrol officer intervened.

Chaos at the Borderline

Wednesday nights at the Borderline Bar & Grill are billed as College Country Night. Known for having all-ages shows, the club advertises dance lessons at 9:30 and 10:30; its Facebook page shows people line dancing on its large dance floor. The Borderline is popular with students from nearby Pepperdine University, which said "multiple" students were at the bar Wednesday night.

The shooting was reported at about 11:20 p.m. local time. As the gunman approached the bar, "he shot a security guard outside, and went inside and continued to fire, and killed 11 people inside," the sheriff told NPR.

When the gunfire began, panicked students and other patrons took shelter where they could, scrambling to hide. Many fled however possible — through windows, back doors and fire escapes — or hid in bathrooms or the attic.

"Unfortunately, our young people, or people at nightclubs, have learned that this may happen," Dean said. "And they think about that. Fortunately, it probably saved a lot of lives that they fled the scene so rapidly."

One witness told NPR's Nate Rott that he and others were able to escape after they grabbed a bar stool and threw it through a back window.

"I heard something go off — obviously, the gunshots," witness Erica Sigman told NPR's Kirk Siegler. "And I realized that it was not music very, very quickly. And I heard everyone scream, 'Get down!' I heard people start saying, 'Run.' So I booked it to my car and with a group of people ... and hid behind my car for a little bit. It stopped and then there was a second round that went off." 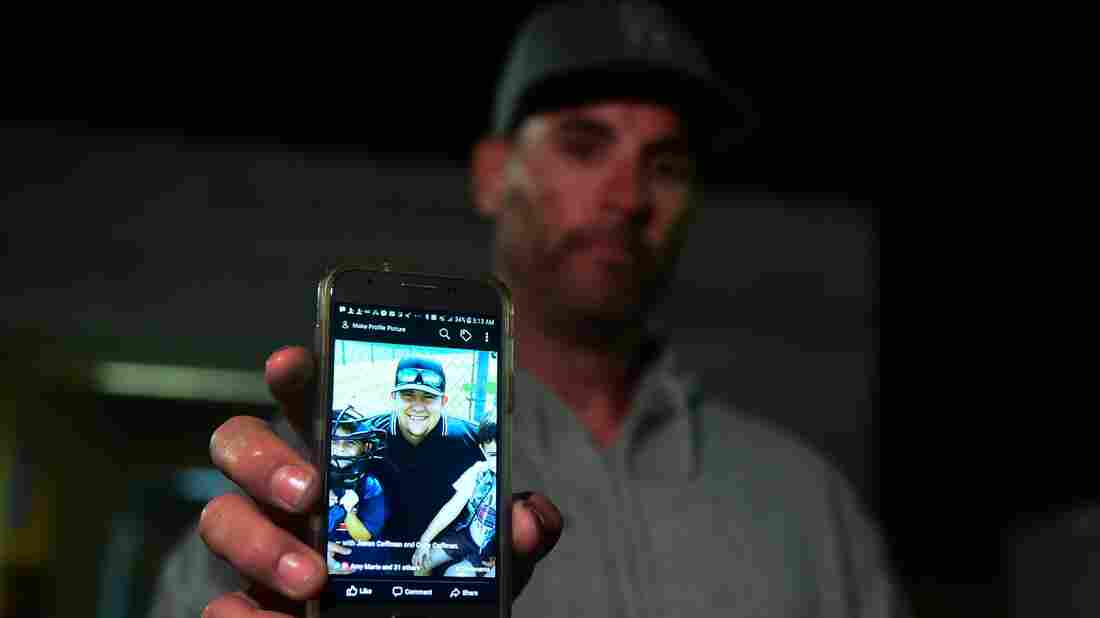 Jason Coffman displays a photo outside the Thousands Oaks Teen Center as he tried to locate his son Cody, who was later found dead at the Borderline Bar & Grill in Thousand Oaks, Calif. Frederic J. Brown/AFP/Getty Images hide caption 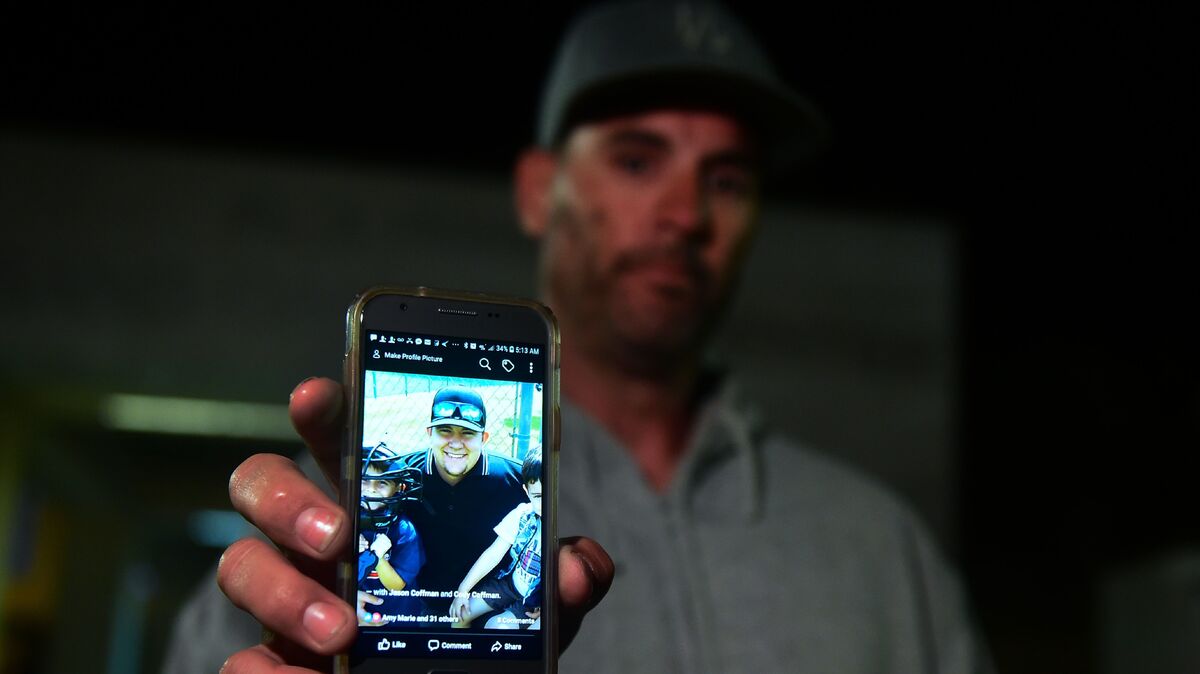 Jason Coffman displays a photo outside the Thousands Oaks Teen Center as he tried to locate his son Cody, who was later found dead at the Borderline Bar & Grill in Thousand Oaks, Calif.

Another witness told ABC 7 that he saw someone throw smoke bombs into the front of the restaurant and shoot a security guard.

"I was at the front door and I was talking to my stepdad. I just started hearing these big pops," John Hedge told the station. "Pop, pop, pop. There was probably three or four, I hit the ground. I look up — the security guard is dead. Well, I don't want to say he was dead, but he was shot. He was down. The gunman was throwing smoke grenades all over the place. I saw him point to the back of the cash register ... and he just kept firing. I ran out the front door."

This is Sarah DeSon, who was inside the Borderline Bar when the shooting massacre began. She says she saw the gunman and hid before being able to “just book it” outside to the parking lot to safety pic.twitter.com/3qNf8jANYp

Dean said his office was aware of reports that the gunman used smoke bombs inside the Borderline but has not yet confirmed them.

Another witness at the club, Nicholas Champion, told reporters that this wasn't his first mass shooting — he said he had been at the Las Vegas country music festival that was the scene of a mass shooting in October 2017.

Other patrons at the Borderline Wednesday night had also been at last year's Route 91 Harvest Festival when it was attacked on the Las Vegas Strip, Champion told journalist Julianne Lima of WPRI 12 TV.

"We all are a big family," he said. "And unfortunately, this family got hit twice."

UPDATE: 11 people, 1 sheriff's sergeant, gunman dead after mass shooting inside #BorderlineBar. Hundreds of people were inside for "College Country Night", including Nicholas Champion. This is not the first mass shooting he's experienced @wpri12 pic.twitter.com/D7ck4AG6SS

When sheriff's deputies and other officers arrived at the scene, they were "still hearing shots" inside, said Capt. Garo Kuredjian of the Ventura County Sheriff's Office.

Relying on active-shooter training that emphasizes a fast response, Helus and a California Highway Patrol officer went inside the large club.

"When Sgt. Helus and the Highway Patrol officer went in, they immediately exchanged gunfire with the suspect and that's when Sgt. Helus was shot several times," Dean said. Helus died at a nearby hospital.

"He died a hero. He went in to save lives, to save other people," Dean said. He also said the 54-year-old sergeant had been slated to retire within the next year or so.

Dean said Helus had been on the phone with his wife when the call about the shooting came in, quickly signing off with "I love you, talk to you later."

Today we mourn the loss of Sergeant Ron Helus who gave his life serving the community. Please keep his family and the families of the victims in your thoughts and prayers. pic.twitter.com/EwDsnPRDCs

When the shooting started, about six off-duty officers from various agencies were inside the club, Dean said. Amid the horrific scene, he added, those officers helped to save or protect civilians.

"I've already talked to a parent that came up and said, 'They stood in front of my daughter,' " Dean said. "So, it was amazing. It was amazing."

Witnesses described the gunman as tall and dressed all in black, wearing a hood.

The victims who were inside the club when the shooting started seemed to range in age from 19 to 25, Dean said. As investigators worked to identify the dead, a number of families waited in anguish, having lost contact with loved ones who had gone to the Borderline.

Jason Coffman is the first to exit the reuinification center. His son Cody is one of the 11 that was killed. He had just turned 22 and had plans of fulfilling his dream of joining the military. Jason says Cody was excited to meet his sister due later this month. @KPCC @LAist pic.twitter.com/AzK3rmIM1v

Ian David Long lived in nearby Newbury Park. Dean says the suspect was armed with a Glock 21 .45-caliber pistol with an extended magazine, adding that "we don't know if he reloaded his weapon or not." He said Long had purchased the gun legally.

On Thursday morning, investigators requested warrants for Long's house and for the car that he drove to the club, Dean said in a news briefing after the sun had risen over the crime scene.

The sheriff said that Long was a veteran of the U.S. Marine Corps and that earlier this year, deputies called to his house were concerned he might have been suffering from post-traumatic stress disorder. 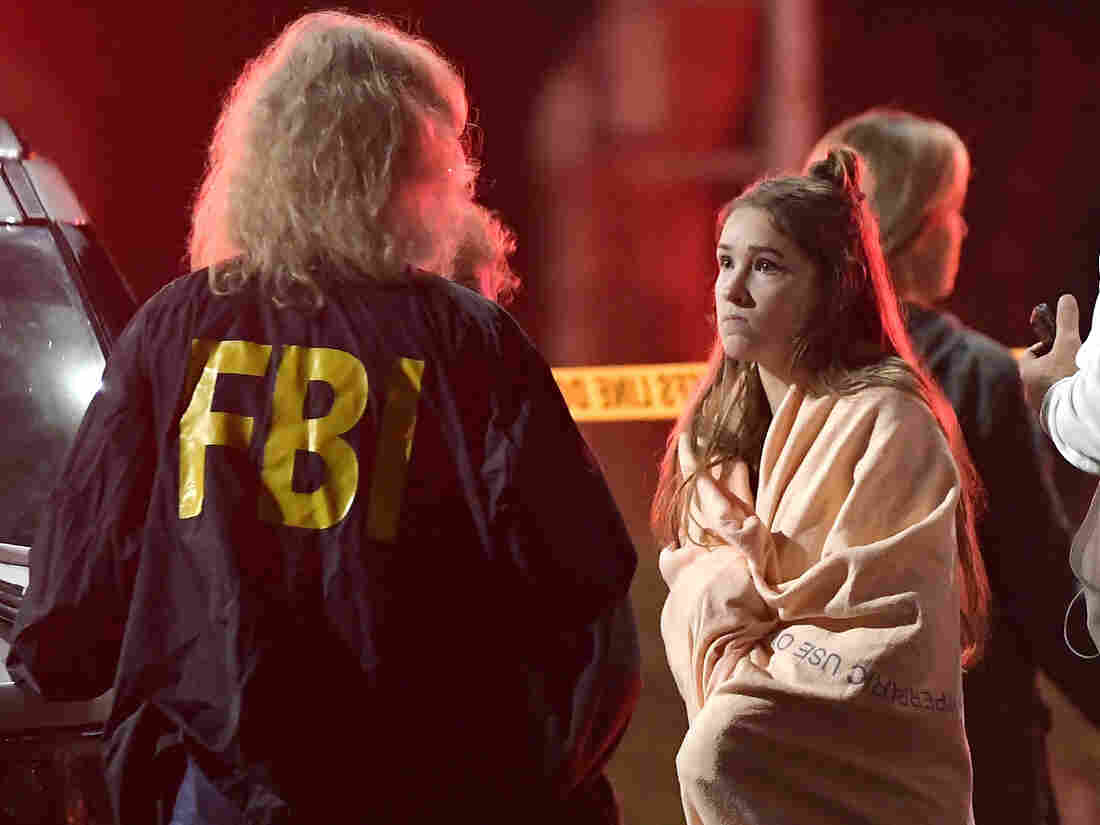 An FBI agent talks to a potential witness to the shooting at the Borderline Bar & Grill in Thousand Oaks, Calif., where a gunman opened fire inside the country dance bar on "College Country Night." Mark J. Terrill/AP hide caption 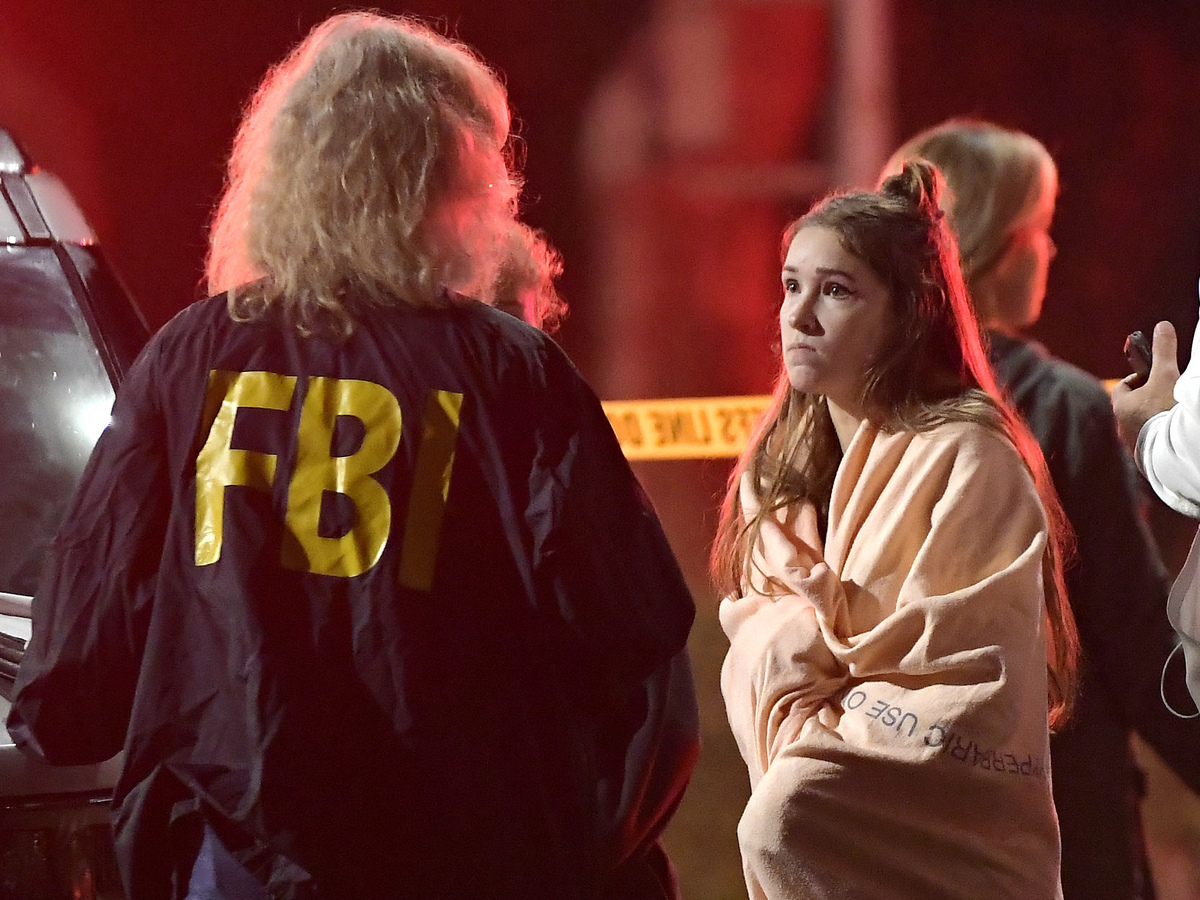 An FBI agent talks to a potential witness to the shooting at the Borderline Bar & Grill in Thousand Oaks, Calif., where a gunman opened fire inside the country dance bar on "College Country Night."

"We've had several contacts with Mr. Long over the years," Dean said, "minor events such as a traffic collision; he was the victim of battery at a local bar in 2015."

"In April of this year, deputies were called to his house for a 'subject disturbing' [call]. They went to the house, they talked to him; he was somewhat irate — acting a little irrationally."

A crisis intervention team was called to the house, along with a mental health specialist, Dean said. After speaking with Long, they left the house without taking him into custody or otherwise intervening.

The Marines issued a statement Thursday saying Long was a machine gunner who attained the rank of corporal during his period of active-duty service, from 2008 to 2013. He was deployed to Afghanistan from November 2010 to June 2011.

Long "was not a stellar Marine," a U.S. official tells NPR's Tom Bowman, saying he was punished for two instances of shoplifting at a post exchange in 2009. Despite those troubles, he was honorably discharged.

The Department of Veterans Affairs said in a statement that "this individual was not enrolled in VA health care at any time."

Both the FBI and the ATF are assisting local authorities with the case to learn more about Long's recent activities and the gun he is said to have used.

Reaction from the community

The Ventura County Sheriff's Department organized a procession to take Helus' body from the hospital to the medical examiner's office. The police escort began at 10 a.m. local time Thursday — and a large crowd of officials and the public turned out to show their respect and to mourn.

"He leaves behind a wife and son," the sheriff's department said. "Our hearts go out to his family and friends during this difficult time."

The shooting took place two days before Dean is scheduled to retire — something he says will still happen, effective "tomorrow at midnight."

When he was asked about the impact of the shooting on his final days leading the department, Dean said, "It can't be any worse."

Pepperdine University was holding classes as normal on Thursday, it says in an emergency bulletin. It adds that students can "adjust their class schedules today" if needed. The school scheduled a prayer service for the community, to be held at noon in the Smothers Theatre.

The student newspaper, the Pepperdine Graphic, reports that nearly 20 students were at the Borderline — and that one of them remains missing.

The University has determined that multiple Pepperdine students were on site at Borderline Bar and Grill in Thousand Oaks. At this time, the University is working to identify and provide support to those students. (1/2)

In addition to Pepperdine, other colleges including California Lutheran University and California State University, Channel Islands are located a short drive from the bar.

CSUCI President Erika D. Beck said in a statement that at least five students from the school had been at the Borderline on Wednesday. All of them, she added, had made it out safely.