Accessibility links
Paradise, Calif., Destroyed By Wildfire, Authorities Say The entire town of 27,000 people was evacuated ahead of the wildfire in Northern California. The fire is the latest in a string of disastrous blazes to hit the state in the past year. 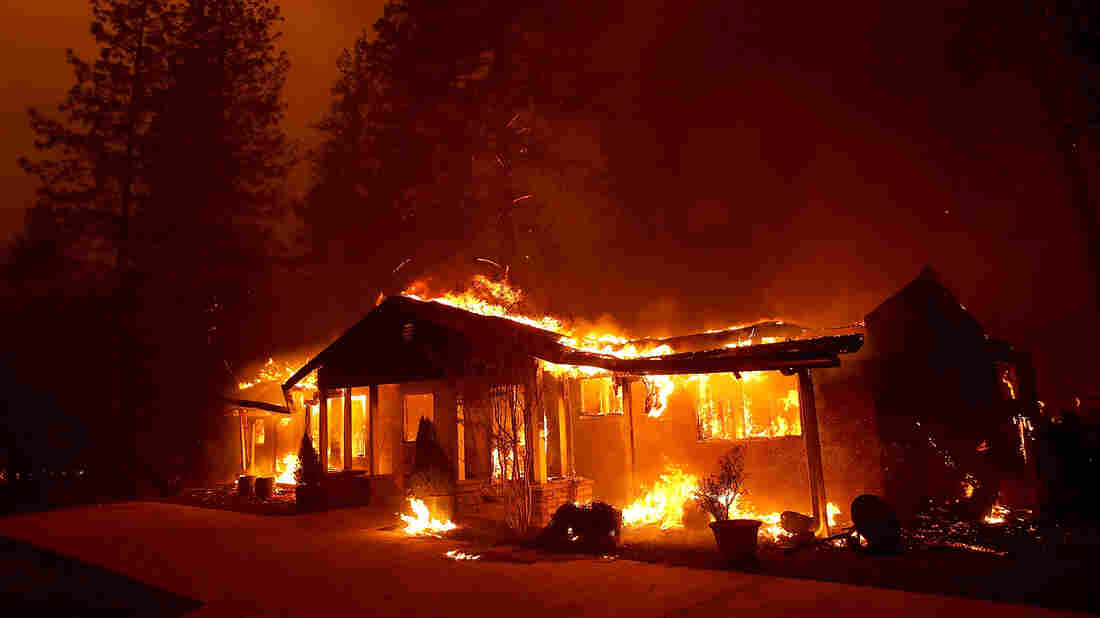 A home burns as the Camp Fire moves through the area on Thursday in Paradise, Calif. Fueled by high winds and low humidity, the rapidly spreading Camp Fire has ripped through the town of Paradise. Justin Sullivan/Getty Images hide caption 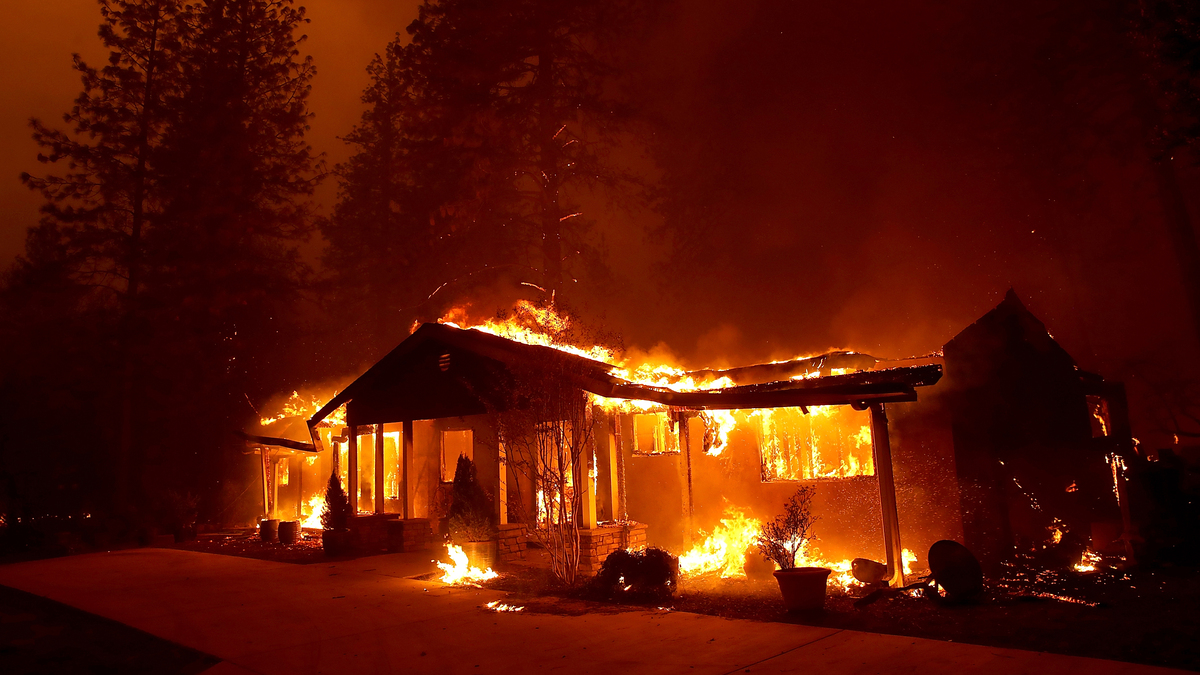 A home burns as the Camp Fire moves through the area on Thursday in Paradise, Calif. Fueled by high winds and low humidity, the rapidly spreading Camp Fire has ripped through the town of Paradise.

A fast-moving Northern California wildfire has forced tens of thousands of people to evacuate, with residents fleeing through flames and leaving their cars to take cover in nearby stores.

The Camp Fire started Thursday morning near Paradise, a town of around 27,000 people some 90 miles north of Sacramento. By Thursday evening, the town was a scene of widespread destruction, and hundreds of structures were reduced to rubble.

Far to the south, outside Los Angeles, the Woolsey Fire, which started Thursday afternoon, has engulfed at least 7,500 acres and forced 30,000 people to flee. 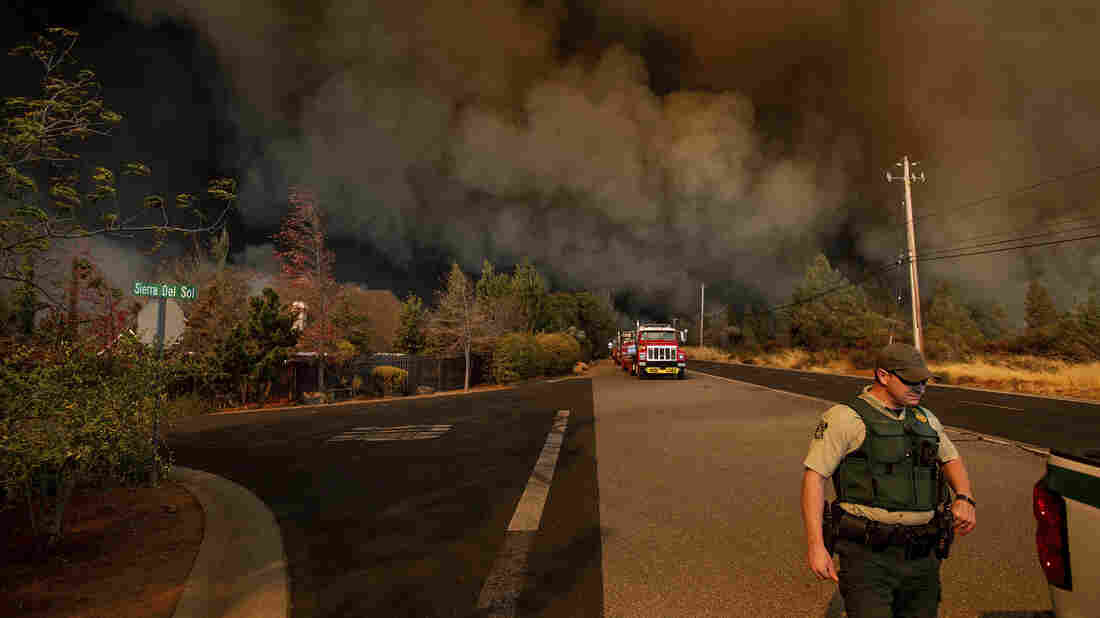 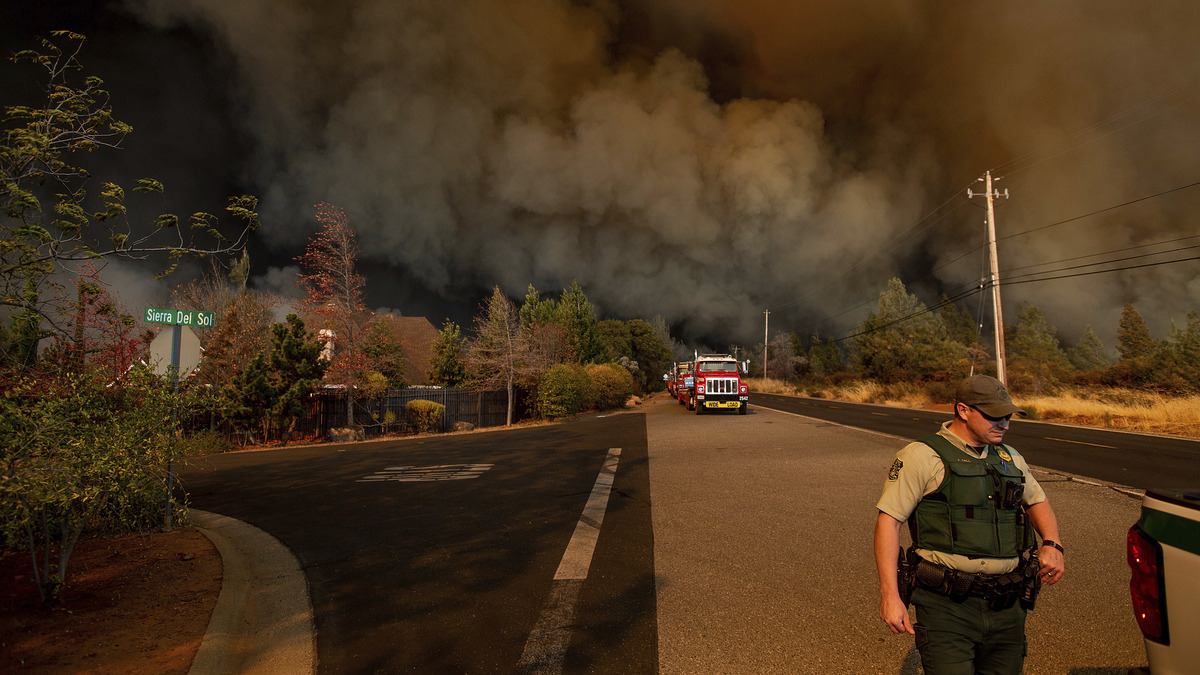 The Camp Fire rages through Paradise, Calif., on Thursday.

"Pretty much the community of Paradise is destroyed, it's that kind of devastation," said Cal Fire Capt. Scott McLean, as quoted by the Associated Press. "The wind that was predicted came and just wiped it out."

Much of the downtown was destroyed. "The whole town's on fire," Councilman Scott Lotter told The Sacramento Bee. It's pretty grim."

The fire has burned 20,000 acres and is not contained.

My mother is trapped with other drivers on Pearson Rd in Paradise with houses burning nearby. People leaving vehicles and running with children and pets.@CALFIRE_ButteCo #CampFire

"Firefighters continue to be challenged with extreme fire and weather conditions including strong winds and with long range spotting. Due to the fluid and rapidly changing conditions, residents are urged to stay updated through official sources for changes to evacuations and road closures," said a CalFire incident report Thursday night.

The entire town had been evacuated earlier, with traffic backing up throughout the area as residents try to get to safety.

When Nate Rodriguez of Paradise woke up Thursday morning, he thought the red glow in the sky was the sunrise. He was wrong. It was the flush of the Camp Fire around the town that made him panic: "I was waving down people, just anyone on the road just help me, because I didn't have a car or nothing."

He and two pit bulls ended up making it to safety.

The fast-moving fire forced startled residents trying to evacuate to abandon their vehicles and flee the town by foot, according to the AP, citing Butte County Sheriff Kory Honea.

"The sheriff confirmed reports that evacuees had to abandon their vehicles. He said rescuers were trying to put them in other vehicles.

" 'We're working very hard to get people out. The message I want to get out is if you can evacuate, you need to evacuate,' Honea said."

On Thursday afternoon, California fire officials said the fire had expanded to about 18,000 acres, but its true size is difficult to pinpoint because of heavy smoke, which can be seen from miles away. Dry, windy conditions are making it difficult to contain the fire.

#CampFire: To support first responders, PG&E shut off some electric customers in the area. As of 1pm, there were 34,200 customers without power due to fire impacts. The cause has not yet been determined.

"When this fire started this morning, wind speeds were 35 to 40 mph gusts," Cal Fire spokesperson Lynne Tolmachoff said. "Once it got going it picked up very rapidly."

Crews and firefighting aircraft are responding from all over Northern California. The cause of the fire has not yet been determined.

The Adventist Health Feather River Hospital in Paradise evacuated all its patients and staff, given its close proximity to the fire, and transported them safely to hospitals in neighboring towns, Adventist Health spokeswoman Jill Kinney told the Associated Press. She said she did not know the exact number of people evacuated.

The Woolsey Fire also burned through several homes in Oak Park in Simi Valley, just a few miles from Thousand Oaks, the site of a deadly shooting at a bar late Wednesday that killed at least 12 people.

#Woolseyfire *UPDATE* Mandatory Evacuations are now in place south of the 101 fwy to Mulholland Hwy, west of Las Virgenes rd. to Westlake blvd. Do not wait until it is too late to safely leave the area https://t.co/KC79ALBFee

The fires are the latest in a string of disastrous wildfires that have burned in California over the past year.

Last year the Tubbs Fire in nearby Napa and Sonoma counties killed 22 people. Paradise itself is around 70 miles south of Redding, where the Carr Fire killed eight people and destroyed more than 1,000 homes in July.

PG&E equipment was identified as a cause in some of the deadly fires that swept through the region last October. The utility cut power to 42,000 customers in October during similar dry, windy conditions.