Accessibility links
'Entire Families Wiped Out': U.S. Airstrikes Killed Many Civilians In Syria Rescuers working to dig out and identify corpses from last year's anti-ISIS offensive in Raqqa estimate there were "thousands" of civilian casualties. The U.S.-led coalition acknowledges 104. 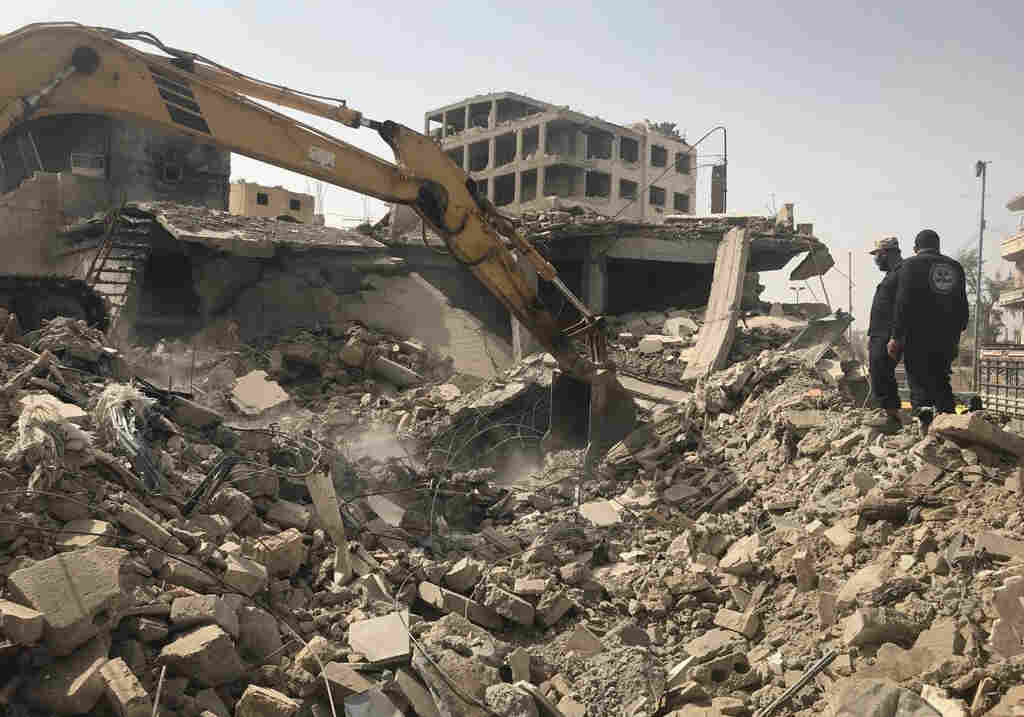 Raqqa's first responders use a digger to push through the rubble of a building likely destroyed in an airstrike carried out by the U.S.-led coalition against ISIS. Ruth Sherlock/NPR hide caption 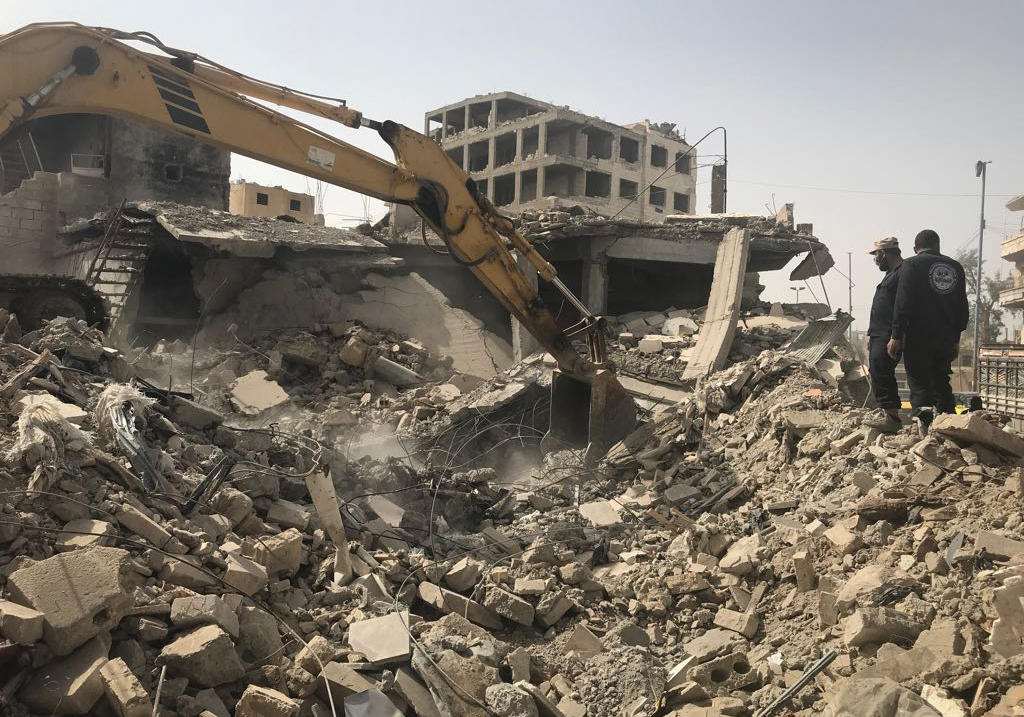 Raqqa's first responders use a digger to push through the rubble of a building likely destroyed in an airstrike carried out by the U.S.-led coalition against ISIS.

On a busy street corner in Raqqa, Syria, a digger pushes through the rubble of a building hit by an airstrike. Onlookers shield their mouths and noses from the dust and stench of corpses of those who perished beneath.

Just streets away, three recovery workers pull out the delicate skeletons of two children from under the debris of a partially collapsed home. And across the city, in what was once Raqqa's public park, men unearth more bodies from a mass grave.

"Raqqa did not deserve this destruction," says Yasser al-Khamis, who leads the city's emergency response team. "Of course, we understood its fate because it was the capital of ISIS, but we were hoping that the civilian death toll would be lower."

One year after the U.S.-led military campaign against ISIS ended in Raqqa, Khamis' team is still recovering the remains of the battle's casualties. This grim, daily work is revealing a civilian death toll that is dramatically higher than the assessment offered by the U.S.-led coalition against ISIS. 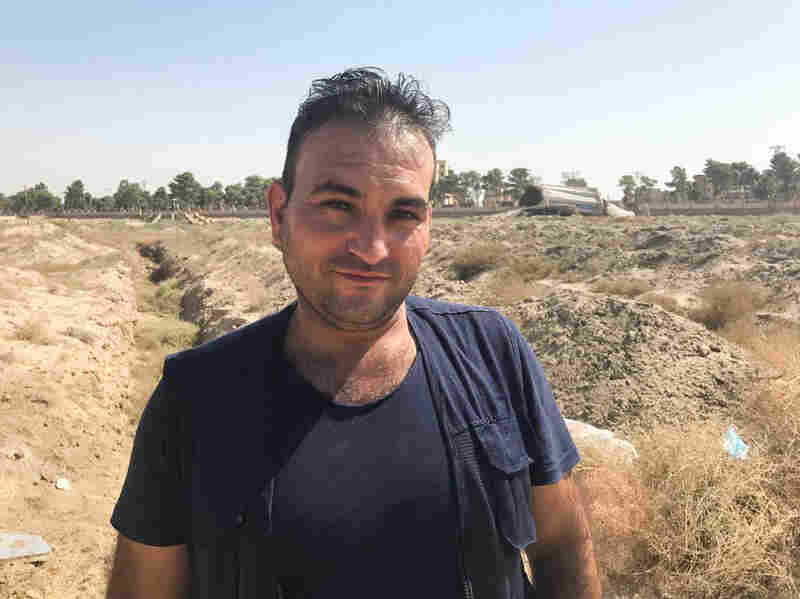 Yasser al-Khamis leads Raqqa's First Responders Team, a U.S.-funded group tasked with emergency work including pulling the bodies of casualties out of the rubble from the war against ISIS. Ruth Sherlock/NPR hide caption 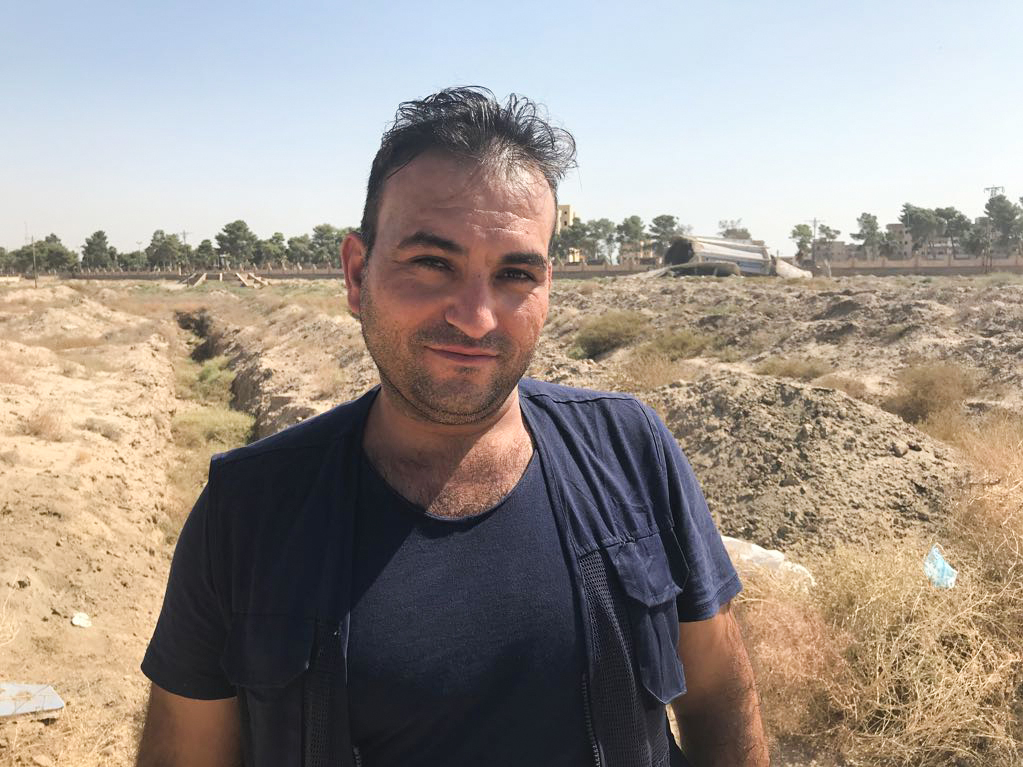 Yasser al-Khamis leads Raqqa's First Responders Team, a U.S.-funded group tasked with emergency work including pulling the bodies of casualties out of the rubble from the war against ISIS.

The rescue workers' findings, which they document in meticulous notes shown to NPR, point to an offensive that killed many more civilians than it did ISIS members, and where the majority of those civilians likely died in American airstrikes.

"With new information being submitted to the CivCas [civilian casualties] team by a multitude of sources every month, the numbers will presumably go up," Ryan adds.

The workers in Raqqa, however, estimate the real tally is much higher — likely in the "thousands."

Since January, the rescue team has uncovered more than 2,600 bodies. Through their identification process, they say they have found that most of the bodies were civilians killed in coalition airstrikes during the battle for Raqqa between June and October 2017.

Formally called the First Responders Team, the group receives funding from the U.S. government, but the assistance is limited. Its approximately 37 members work long hours for little pay — some are volunteers — and say their efforts are slowed by a lack of heavy machinery needed to access the bodies.

With many more corpses still under rubble, the rescue workers estimate it will take another year to clean the city of the dead.

Raqqa served as the capital of ISIS' self-proclaimed caliphate for almost four years after the militant group seized the city in 2014.

The U.S.-led coalition's offensive on Raqqa came after several years of fighting the extremist group in Iraq and other parts of Syria.

While campaigning for president, Donald Trump vowed to "bomb the s*** out of" ISIS.

In the months following his January 2017 swearing-in, conflict analysts reported increases in both the numbers of U.S. airstrikes and of civilians reported killed in the attacks.

President Trump reportedly handed decision-making power for major bombardments to the military, enabling airstrikes to be more easily called in by commanders on the ground during a battle.

In May 2017, Defense Secretary James Mattis told CBS News the U.S. was accelerating and intensifying the campaign against ISIS, and added, "We have already shifted from attrition tactics ... to annihilation tactics."

In Raqqa, the consequences of the "annihilation tactics" are still keenly felt.

According to Airwars, an independent research group monitoring the anti-ISIS conflicts in Iraq and Syria, the U.S. was responsible for about 95 percent of the airstrikes and all of the artillery barrages in Raqqa. The U.K. and France also participated in the offensive. 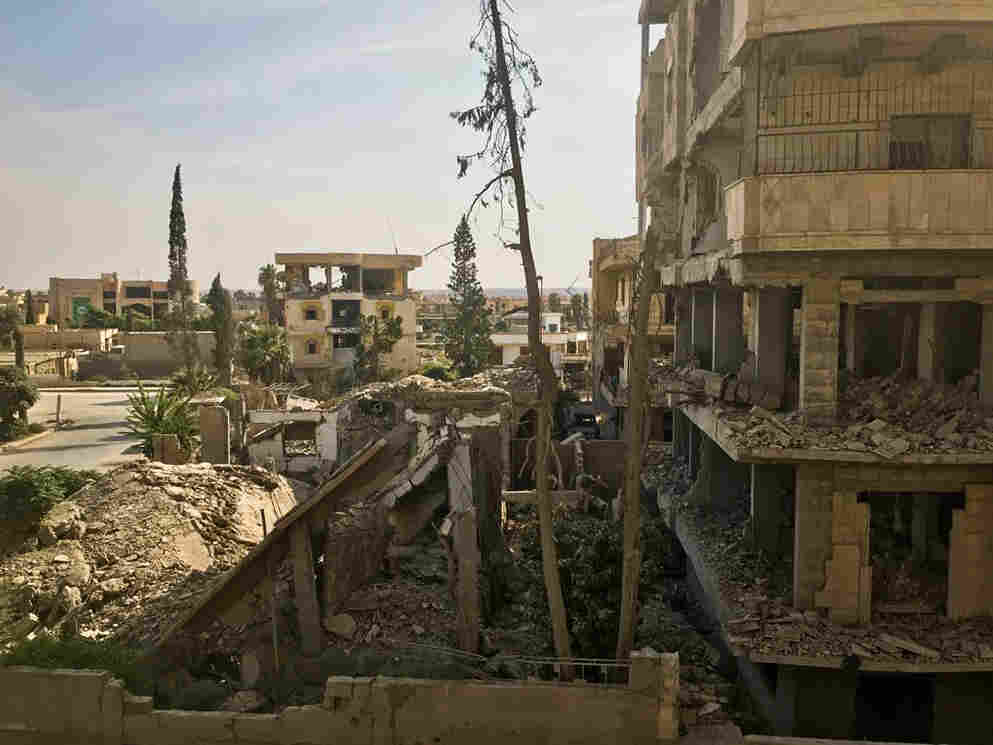 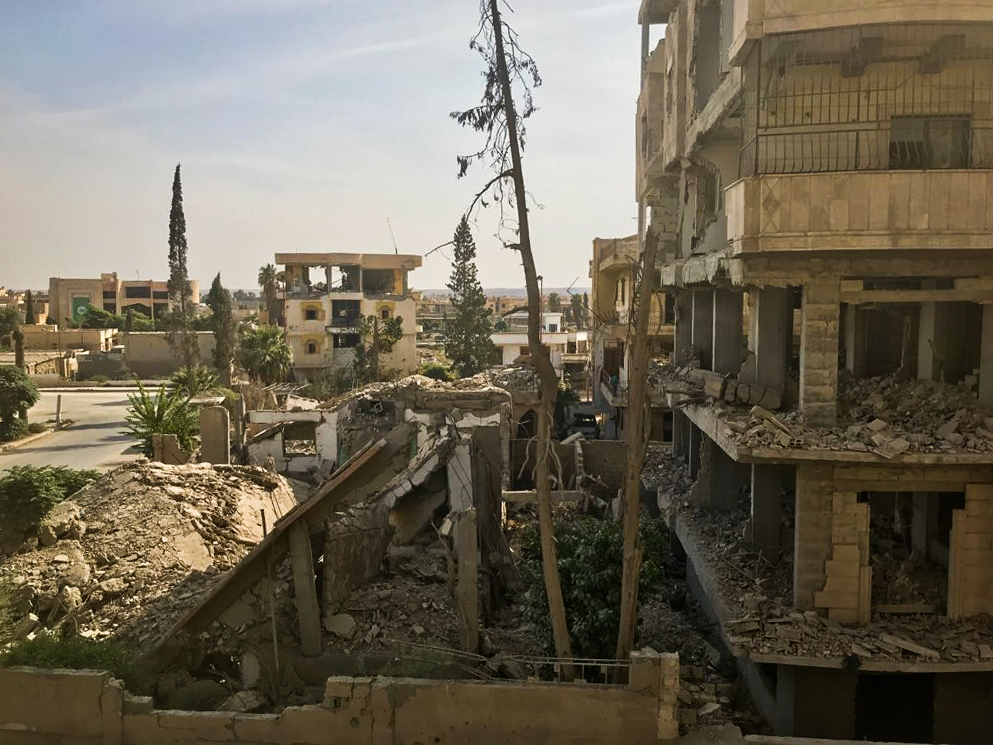 A view of a destroyed Raqqa neighborhood.

Data given to Airwars by the U.S. military's central command show the coalition launched at least 21,000 munitions — airstrikes and artillery — in the city in little over four months.

"Entire families have been wiped out"

By the end of the campaign, Raqqa was a wasteland of smashed concrete; its residential tower blocks were flattened and schools and hospitals toppled. A United Nations study found that over 80 percent of the city — originally home to some 220,000 people — is damaged or destroyed.

Many residents say they lost loved ones in the strikes.

Mohanned Tadfi, 41, recently buried his mother, his brother, his sister-in-law and seven nieces and nephews. "Ten people," he says. "A plane came and hit the house and the building of five floors fell on their heads."

Tadfi says his brother Latuf had found it too hard and dangerous for his family to leave. "ISIS was executing anyone from his neighborhood who tried to escape. And in any case, our mother is diabetic and can't walk well, and it was too difficult [to] carry her because the bridges out of the city had been bombed."

The family stayed in their basement apartment as the war intensified around them. The Syrian Democratic Forces, a U.S.-backed militia, was closing in on the neighborhood and the family thought the fighters would soon capture the area from ISIS.

On Sept. 5, 2017, just after a muezzin in a nearby mosque called the end of noon prayers, an airstrike hit the building where Tadfi's family was. Another brother, Raed Tadfi, went to deliver insulin for their mother. He found Latuf dead on the steps and the building collapsed behind him.

Days later, SDF fighters seized control of the neighborhood. Tadfi says he and his brother asked the militia for access to the house. "Please, there are children under the rubble. My brother's children, young kids. Maybe even just one of them is still alive!" he recalls asking them.

But they were told the area was too dangerous for civilians. It wasn't until three months later that Tadfi was finally able to recover his loved ones. He hired a flatbed truck and took them away to graves he says he dug with his own hands.

The Tadfis' story is one of the cases being looked at by Donatella Rovera, a senior crisis response adviser for Amnesty International who has spent much of the last year in Raqqa. She compiles witness testimonies and analyzes war damage to buildings as part of an ongoing investigation to determine how many civilians were really killed in the coalition attacks. 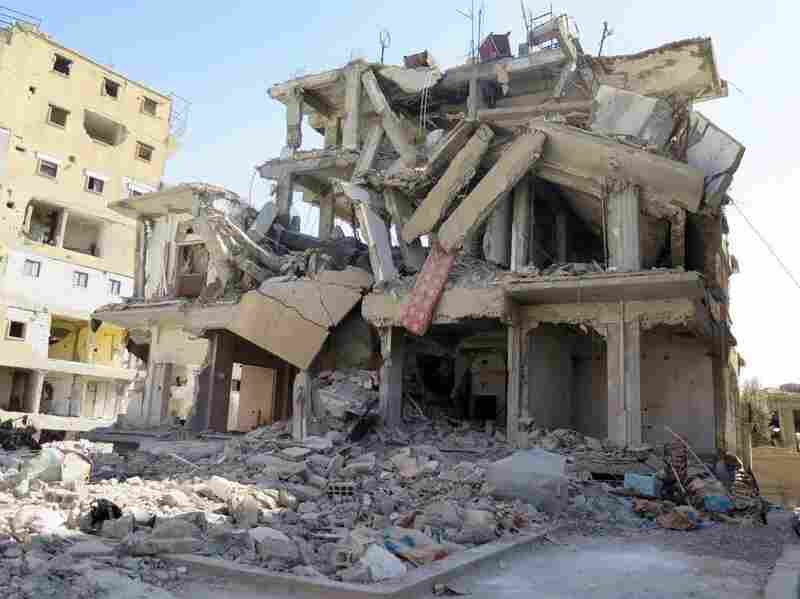 The building in Raqqa of the former home of Latuf Tadfi and his family, which relatives say was hit by a U.S.-led coalition airstrike. Ruth Sherlock/NPR hide caption 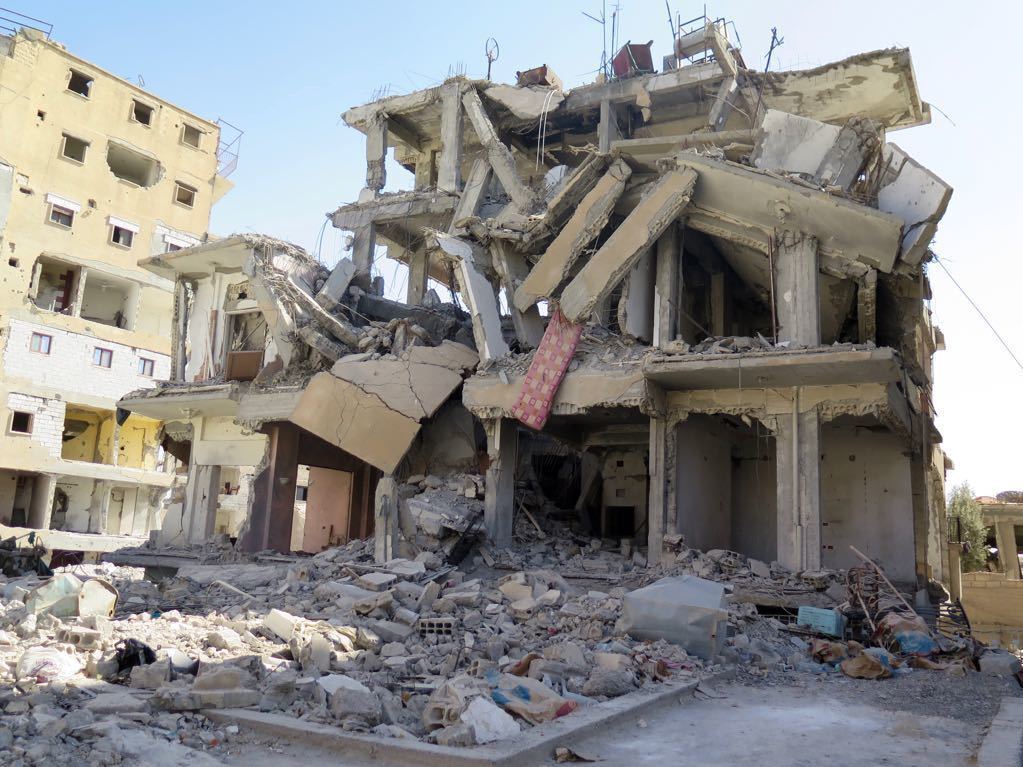 The building in Raqqa of the former home of Latuf Tadfi and his family, which relatives say was hit by a U.S.-led coalition airstrike.

"This is one case of many that I have been investigating where entire families have been wiped out in places where they thought they would be safe," she says, standing beside the wreckage of the Tadfis home.

In a statement responding to NPR, Col. Ryan, the spokesman of the Combined Joint Task Force, said the coalition conducted "thorough assessments" to ensure it didn't accidentally kill civilians. "The majority of strikes were executed as planned, but to say this was perfect execution from all sides is meaningless and we understand mistakes were made."

He said the coalition was "fighting a ruthless enemy that was systematically killing innocent civilians and unfortunately some were unintentionally killed trying to liberate them, something we tried to avoid."

Rovera doesn't dispute that ISIS tried to prevent civilians from leaving. But, she says, the military knew that before the battle and did not adjust their attack plan accordingly.

Her investigation so far suggests that "many hundreds" of civilians were killed in the Raqqa offensive, which she says prioritized speed, even in densely populated neighborhoods. 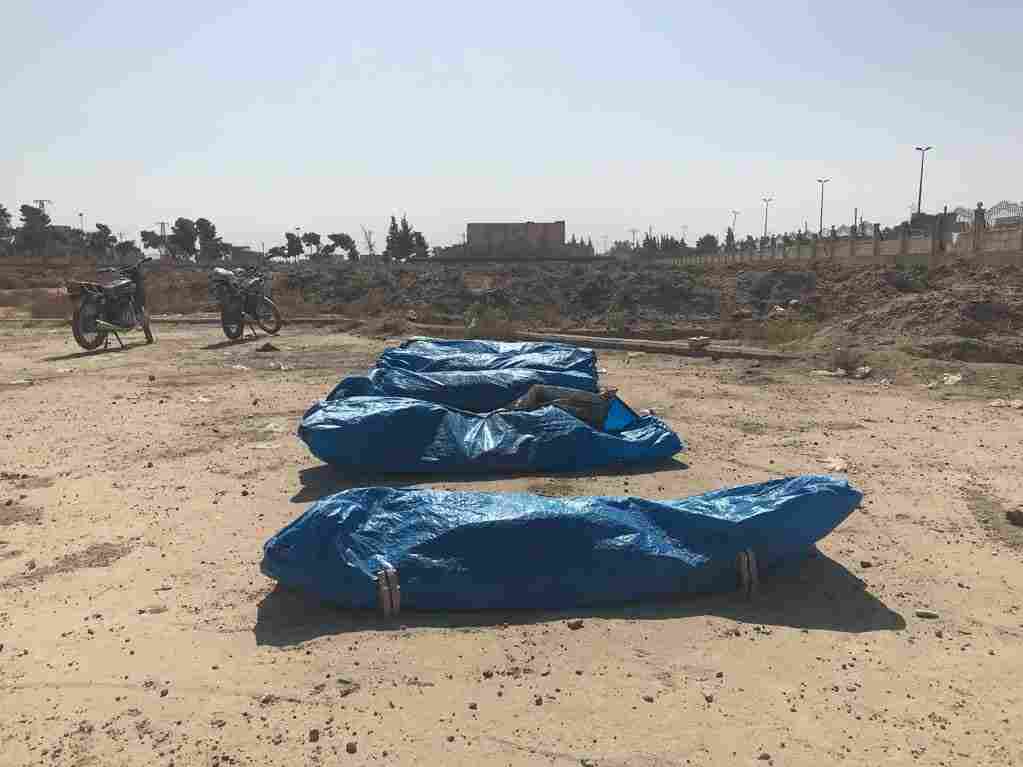 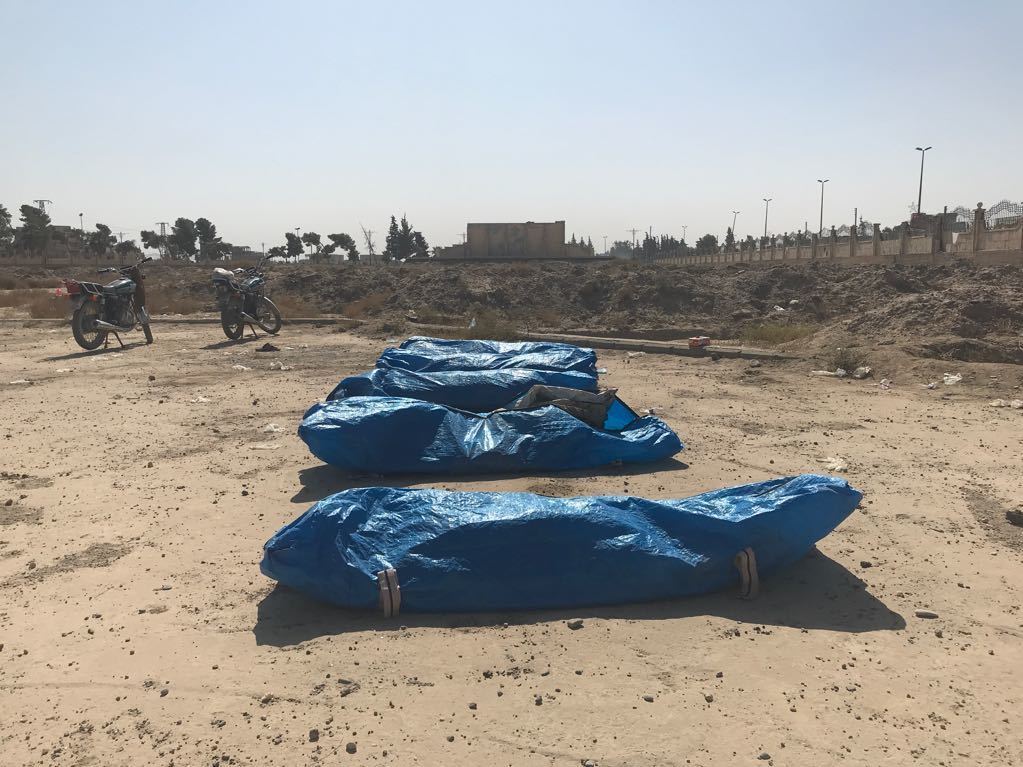 "If they had had observation for an adequate period of time, they would have realized that there were civilians in those buildings," she says. "Yes, the war probably would have taken more time. But more lives would have been saved."

The rescue unit says it determined most of the more than 2,600 recovered bodies were civilians in a few different ways. ISIS combatants often dressed a specific way and carried an ID card, the workers say. Other characteristics, such as victims' age and gender and testimony from families, also help in the team's documentation.

Rescuers say they recognize airstrike scenes from the scale of the destruction.

Airwars puts the civilian death toll in the Raqqa offensive at 1,400, but it believes the number could be higher. It gathers data largely remotely, through communication with sources and information from social media, and has not been able to verify every reported case.

"We expected a significantly higher portion of civilian harm reports to be determined as credible, since in Raqqa really the only player causing the destruction was the coalition," says Chris Woods, the director of Airwars.

He explains that the coalition has assessed and accepted only a fraction of the casualty reports from Raqqa than it did from the major campaign to drive ISIS from Mosul, Iraq, from October 2016 to July 2017.

"That suggests a political dimension to the decision-making process," he says. "We can't think of another explanation for that discrepancy."

Rovera, the Amnesty International adviser, says it is imperative that coalition forces send ground investigators into Raqqa. "Having dropped the bombs from the sky they should now be sending their investigators on the ground now to establish the facts of what was the impact of those strikes on the civilian population," she says.

Col. Ryan from the coalition said the existing coalition forces in Syria are not a trained investigative force and taking them away "from their mission is not advisable as the fight against this ruthless enemy continues."

For now, Raqqa's people are left to count their dead largely alone, while the U.S. and other powers strike elsewhere in Syria.