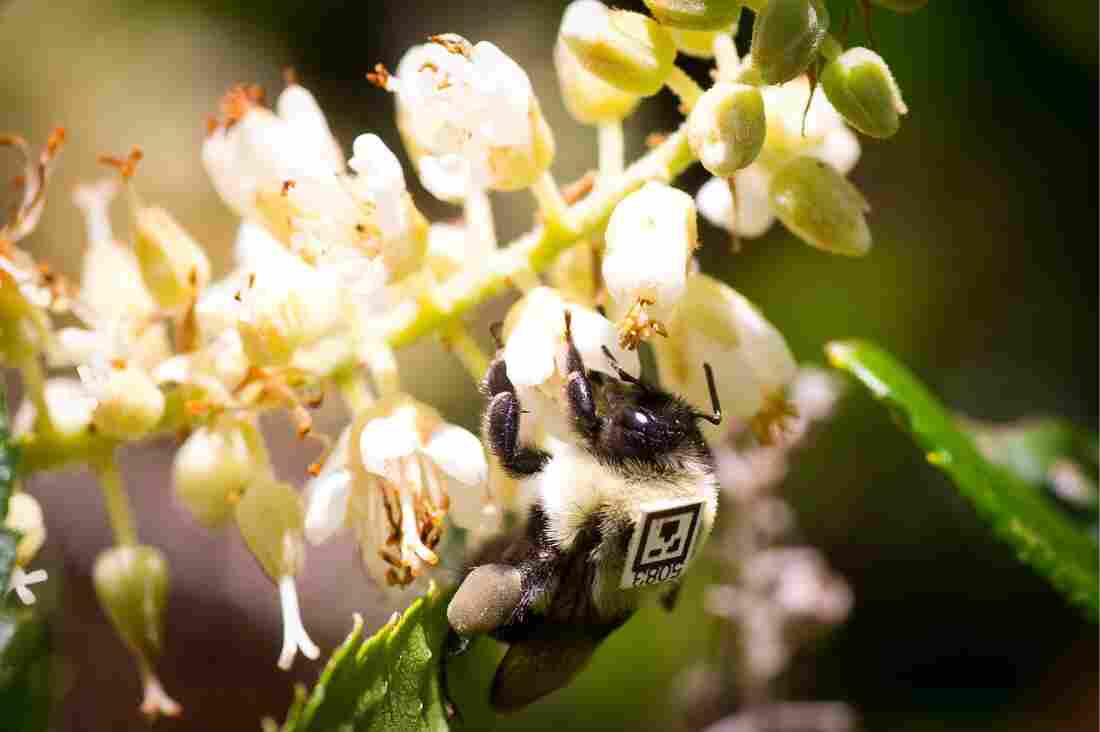 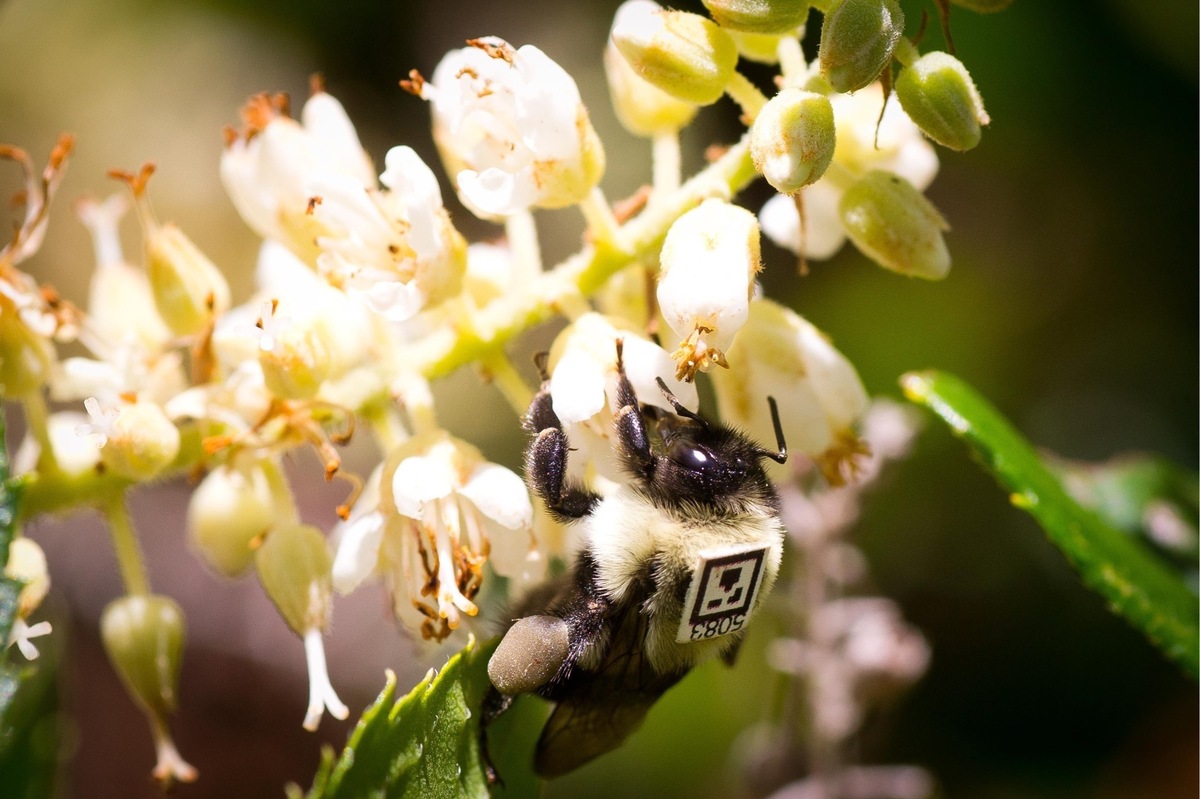 A bumblebee outfitted with a unique tracking tag forages outdoors.

A team of researchers peered inside bumblebee colonies and spied on insects individually labelled with a tiny tag to figure out exactly how exposure to a common insecticide changes their behavior in the nest.

They found that the insecticide — from a controversial group called neonicotinoids — made the bees more sluggish and antisocial, spending more time on the periphery of the nest. It also made them less-attentive parents, according to research published Thursday in the journal Science.

Neonicotinoids, commonly known as "neonics," are near-ubiquitous in farming in many countries. They're commonly applied to the seeds of crops such as corn or soy before planting. The plant then carries traces of the insecticide as it grows, even showing up in the pollen, which scientists believe is one way bees are exposed. As NPR's Dan Charles has reported, "neonicotinoid residues also have been found in the pollen of wildflowers growing near fields and in nearby streams."

A growing body of research points to their deleterious effects on bees, which serve an important role in pollinating crops. Scientists have previously found that the insecticides can impair a bee's ability to forage and limit the growth of a colony.

"There's a whole slew of important behaviors happening within the nest that aren't associated with forging directly, and so how these compounds might be affecting those behaviors, we really haven't understood so well," Harvard University biologist James Crall, the study's lead author, said in an interview with NPR.

He says scientists think the chemical is disrupting the insect's central nervous system, which can change bee behavior in subtle ways — such as how bees regulate the temperature of their young.

Typically, a colony does a good job of maintaining its temperature within a very narrow range, Crall says. But one experiment showed that in colonies exposed to neonicotinoids, "that ability was impaired, so they were less good at maintaining temperature in that narrow preferred range." 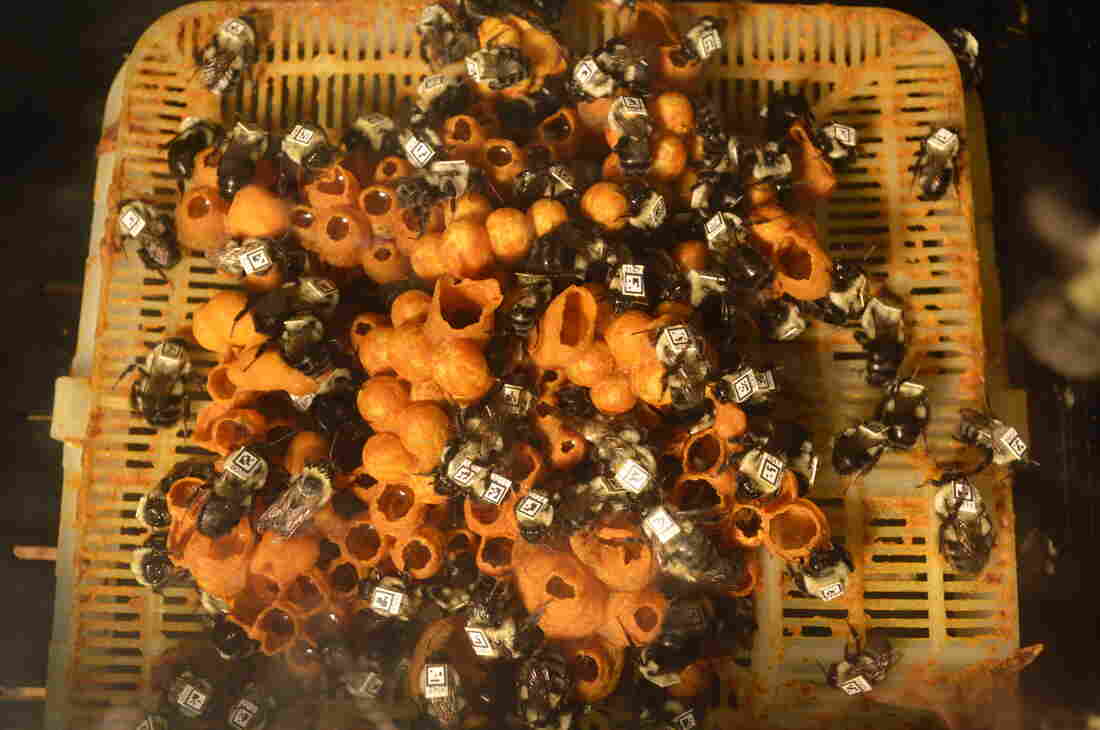 Workers inside a bumblebee nest are outfitted with tracking tags. Scientists used a robotic arm to take video of the bees' behavior when exposed to a common insecticide. James Crall /Science hide caption

Bumblebees also typically build a kind of wax blanket over the developing young to insulate them from the cold. "Actually in our control colonies, in the outdoor conditions we're putting them in, almost all of our colonies built some amount of that sort of insulating wax canopy," Crall says. But none of the colonies exposed to the insecticide built that protective layer.

Christian Krupke, a Purdue University entomologist not involved in the research, told NPR that he finds this the most interesting finding of the study. He said some stressed bee colonies have been known to succumb during the winter. The fact that insecticide exposure appears to disrupt bees from building an insulating layer "presents a mechanism for that observation that we've seen in various sorts [of bees] ... that winter is the time of greatest hazard."

In another experiment, the scientists exposed nine colonies to a common type of neonic. Another nine colonies were not exposed. Then they used a robotic arm to take video inside all the colonies, tracking the individually tagged bees.

"We can map out things like where they are, who they're interacting with, and how much nursing they're doing," Crall said. That technology marks a step forward in a long history of humans tracking bee behavior, he added, because it lets them keep tabs on "every bee in a colony at the same time, which is basically impossible for a human to do."

They saw changes in bee behavior colony-wide — but the magnitude of the effect changed based on time of day, becoming stronger at night. "Not only are we seeing these kind of effects, but they actually have some kind of interaction with the natural circadian rhythm of the colony," Crall said.

Bayer, a prominent maker of neonicotinoids, has previously questioned scientific research suggesting the chemicals have harmful impacts on bees.

"While we haven't yet had the opportunity to review [this] full study, it appears to confirm what is already known about neonicotinoids and bees: Exposures to higher doses can cause differences in bee behavior, whereas lower doses are well tolerated by bees," the company said in an emailed statement. It did not specify what it views as "higher" or "lower" doses.

The scientists who conducted this bee study disagree with the company's characterization, saying their research shows that "field-realistic levels" of the pesticide impact social interactions within the nest.

Earlier this year, the European Food Safety Authority concluded that "most uses of neonicotinoid pesticides represent a risk to wild bees." That prompted the European Commission to tighten existing restrictions on neonicotinoid use in the EU.