Accessibility links
At Least 9 Dead In California Wildfires From Malibu To Paradise Three wildfires have forced 250,000 people to evacuate their homes across the state. Two of those dangerous blazes menaced Thousand Oaks even as it struggles to cope with a mass shooting. 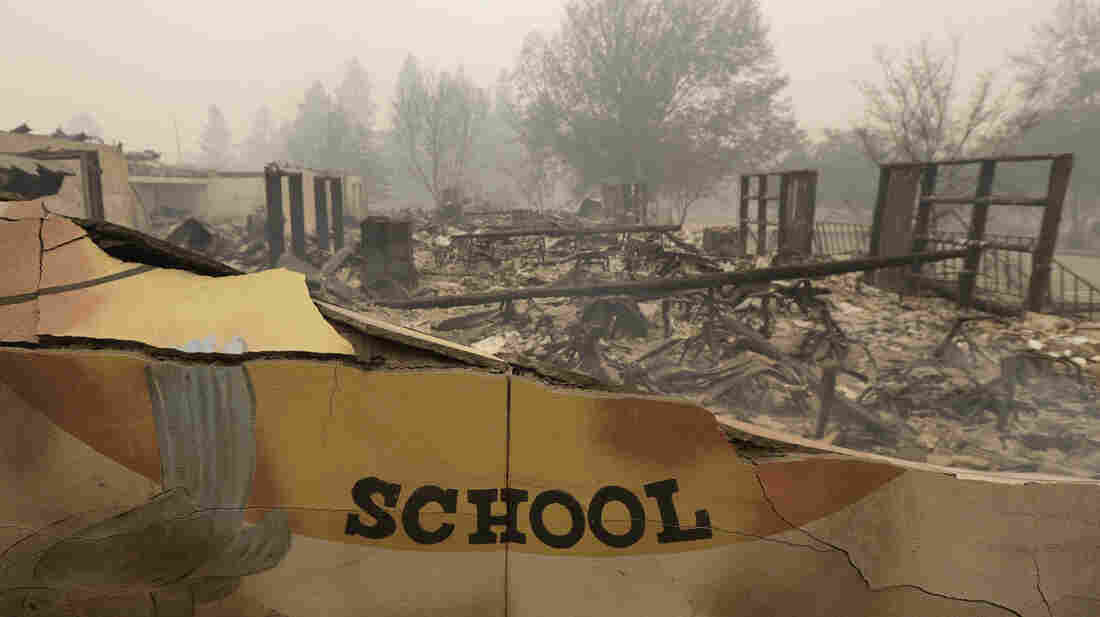 The burned remains of Paradise Elementary School is seen Friday, in Paradise, Calif. Authorities say a wildfire has all but destroyed the Northern California town. Rich Pedroncelli/AP hide caption 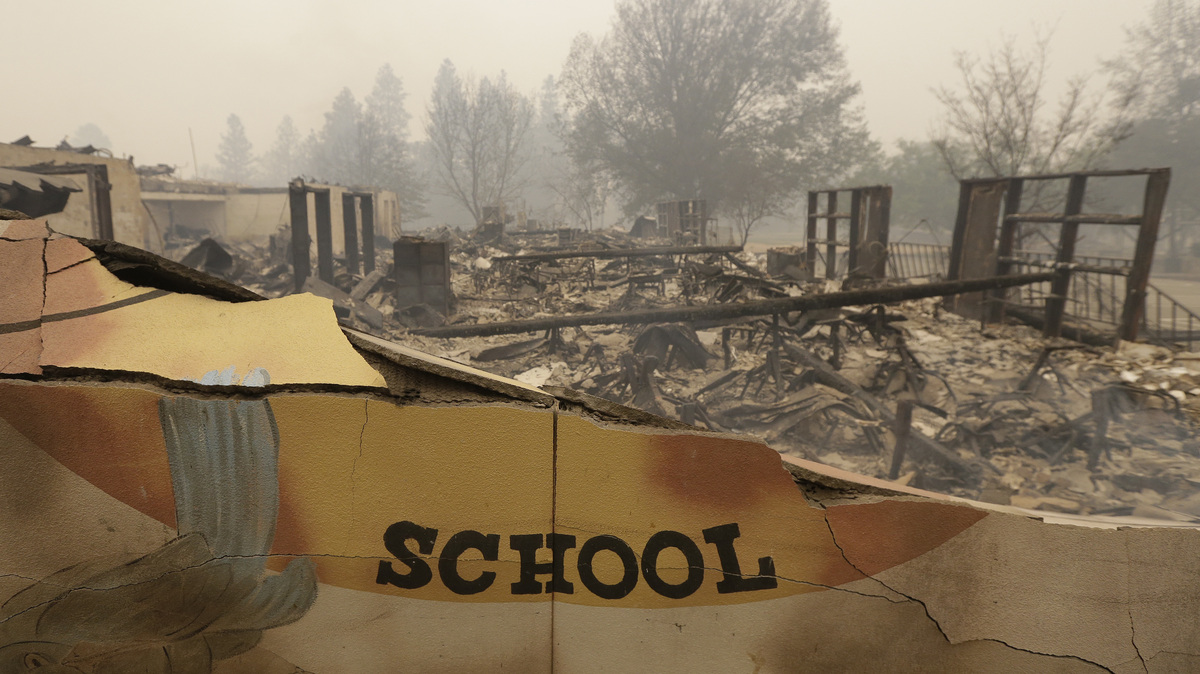 The burned remains of Paradise Elementary School is seen Friday, in Paradise, Calif. Authorities say a wildfire has all but destroyed the Northern California town.

Officials in California say that nine people have died in the fast-moving Camp Fire near the small town of Paradise, Calif., population 27,000, which has been all but wiped off the map and its buildings reduced to ruin.

More than 6,700 buildings have been destroyed, most of them homes, by the fire that has burned more than 90,000 acres, or about 140 square miles. The Camp Fire, which is still only about 5 percent contained, is being called the most destructive blaze in state history.

"The preliminary investigation revealed that the victims were located in vehicles that were overcome by the Camp Fire. Due to the burn injuries, identification could not be immediately made," the office said in a statement released Friday. 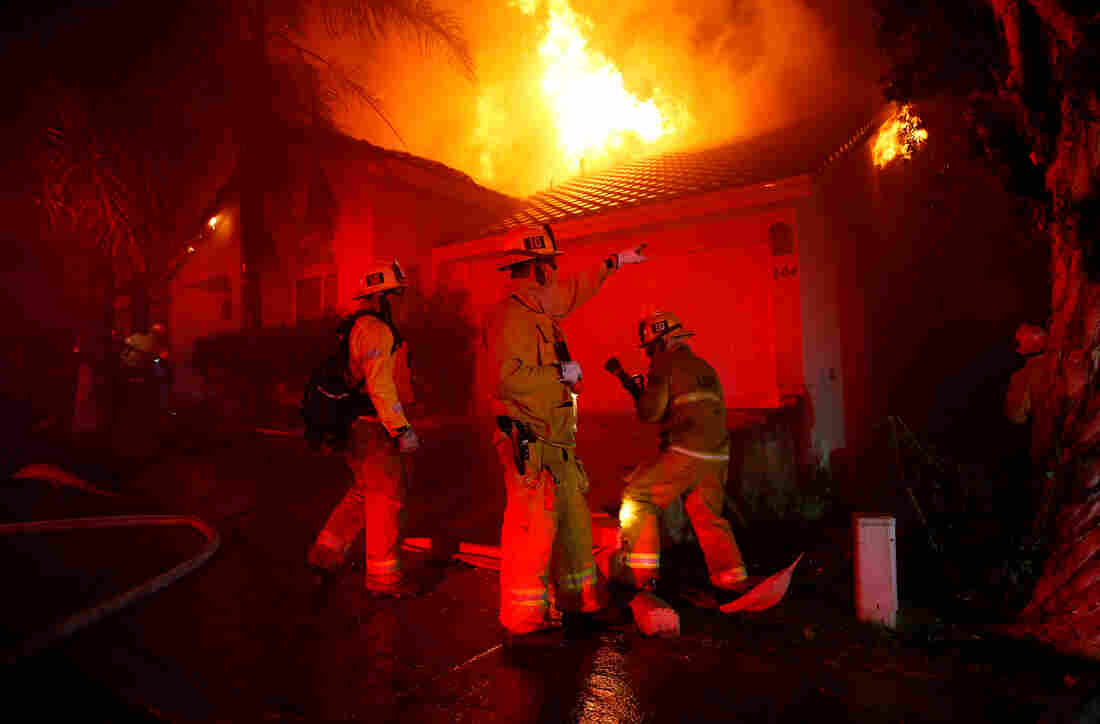 Firefighters try to beat back the Woolsey Fire in the early hours of Friday. One day earlier, the blaze ignited as mourning residents tried to cope with quite another kind of terror in Thousand Oaks, Calif. Eric Thayer/Reuters hide caption 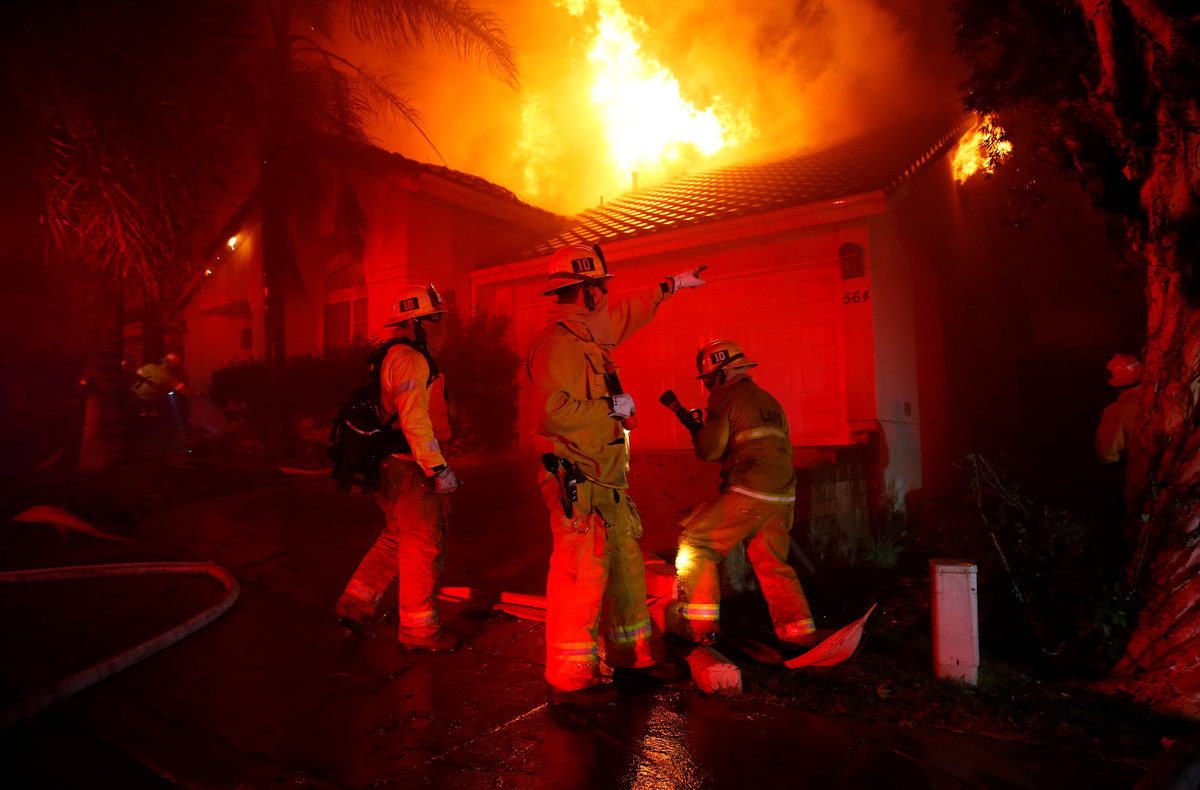 Firefighters try to beat back the Woolsey Fire in the early hours of Friday. One day earlier, the blaze ignited as mourning residents tried to cope with quite another kind of terror in Thousand Oaks, Calif.

Officials offered few other details on the latest fatalities, other than to say that the victims were found outside of residences, except in one case.

Another 35 people were reported missing as of Friday afternoon but that number could likely change, Megan McMann, committee relations coordinator for the Butte County Sheriff's Department, told NPR. 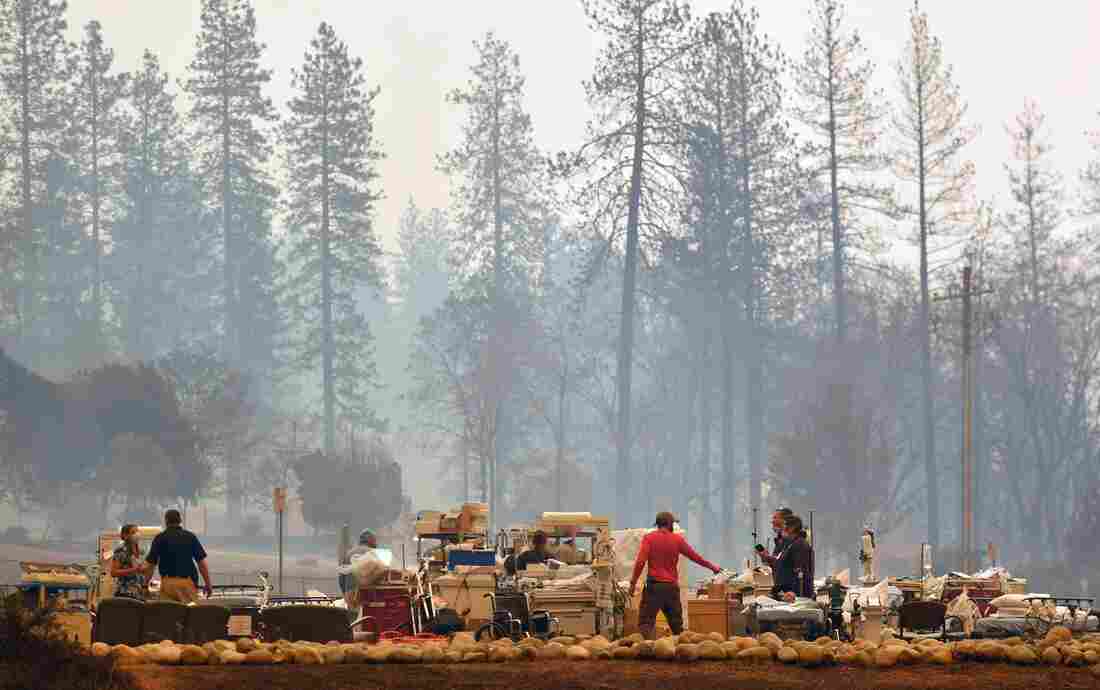 Search and rescue teams scramble to get patients and medical devices to safety as the Camp Fire cuts a fiery path through Paradise. Josh Edelson/AFP/Getty Images hide caption 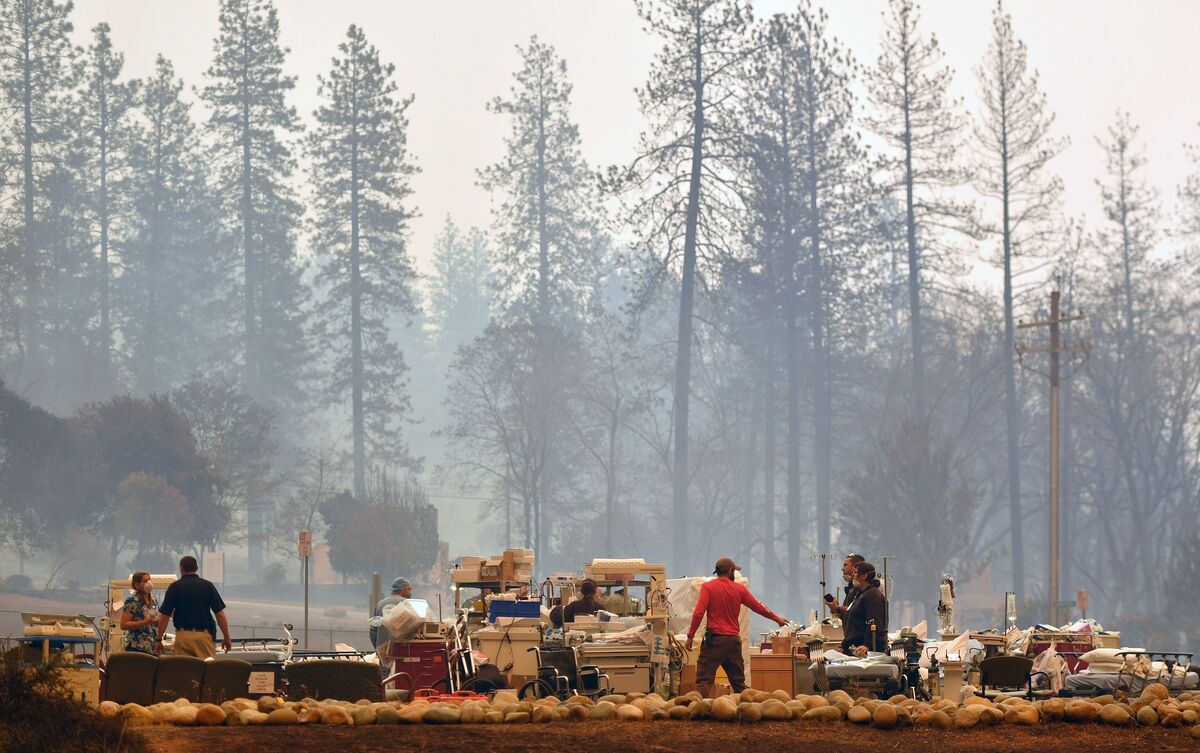 Search and rescue teams scramble to get patients and medical devices to safety as the Camp Fire cuts a fiery path through Paradise.

Butte County Sheriff Kory Honea said in a Friday evening news conference that he expected there will be more casualties. "I fear it will be my duty to continue to update these figures," he said.

According to the Sacramento Bee, those five "as-yet unidentified victims were found along Edgewood Lane, a dead-end street on the southeast edge of town, where massive evacuee traffic caused logjams and left some people fleeing their vehicles and others waiting it out."

Three firefighters have been wounded fighting the fire, according to Scott McLean, deputy chief of communications with CAL FIRE. One firefighter remains in the hospital, while the other two have since been released, McLean told NPR. "This is the most destructive fire in California's recorded history," he said.

The cause of the Northern California blaze has not been determined. However, NPR's member station KQED reports:

"[Utility giant PG&E] has informed state regulators that it experienced an incident early Thursday on a major electrical transmission line at a remote site in Butte County just minutes before the reported start of the devastating Camp Fire. ... It's not clear from the report whether the damage occurred before or after the fire began, and a company spokesman did not address that question.

"But the location identified in the report appears to be very close to the spot where firefighters first encountered the blaze." 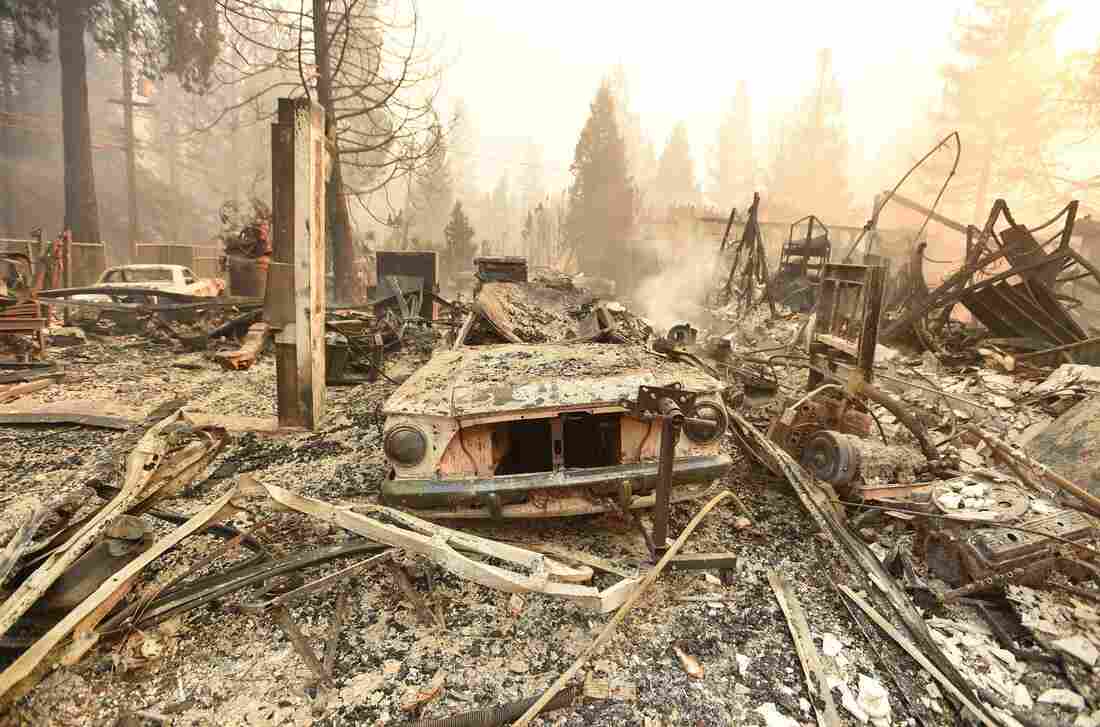 The charred remains of a vehicle and home in Paradise destroyed by the Camp Fire on Thursday. Josh Edelson/AFP/Getty Images hide caption 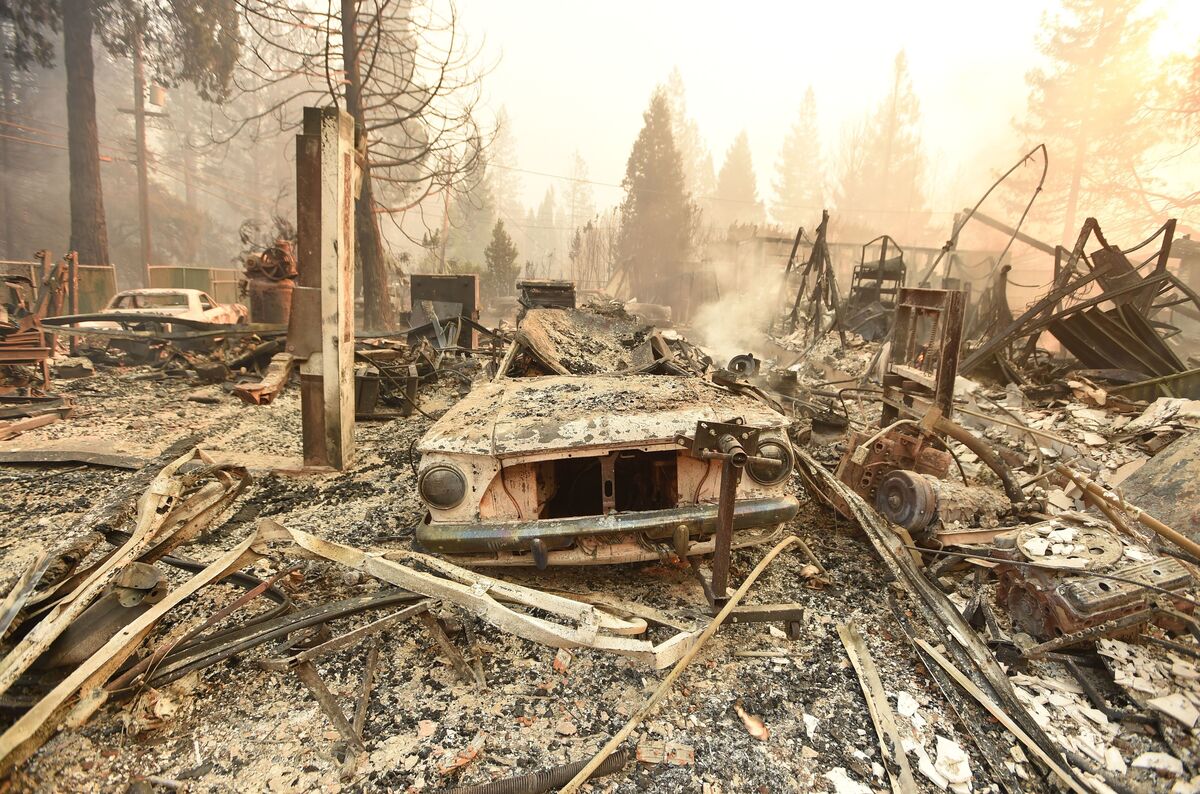 The charred remains of a vehicle and home in Paradise destroyed by the Camp Fire on Thursday. 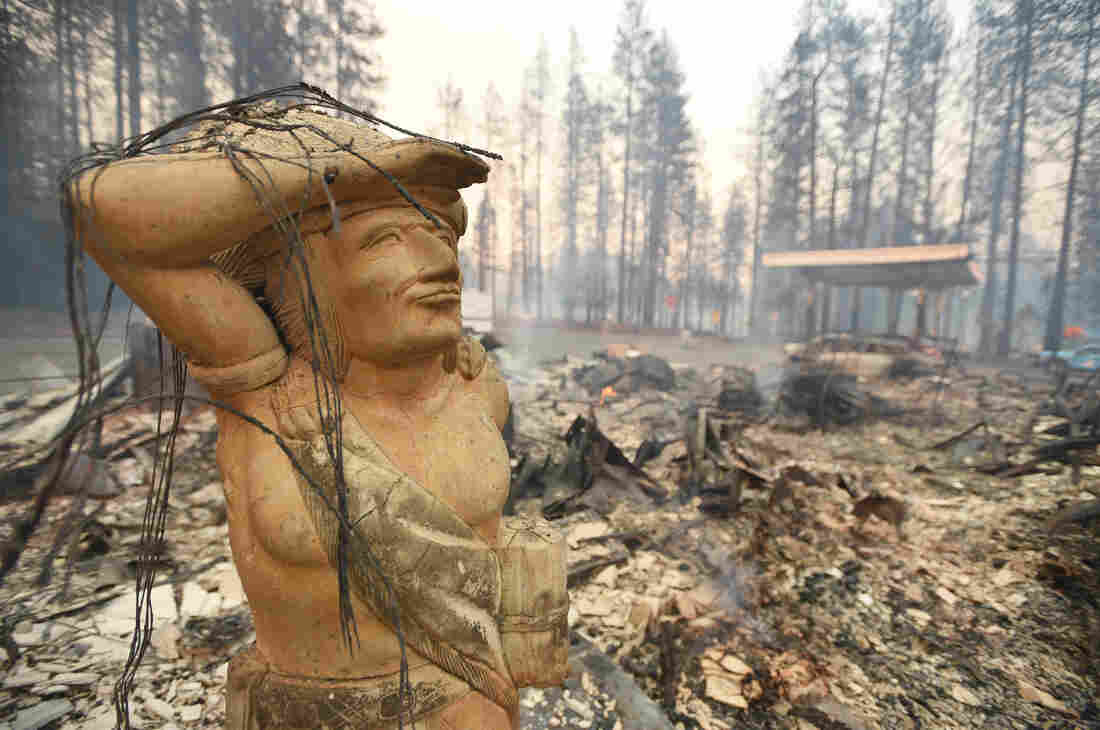 A statue stands amid the rubble of a smoldering property Thursday in Paradise, which was ravaged by the Camp Fire. Josh Edelson/AFP/Getty Images hide caption 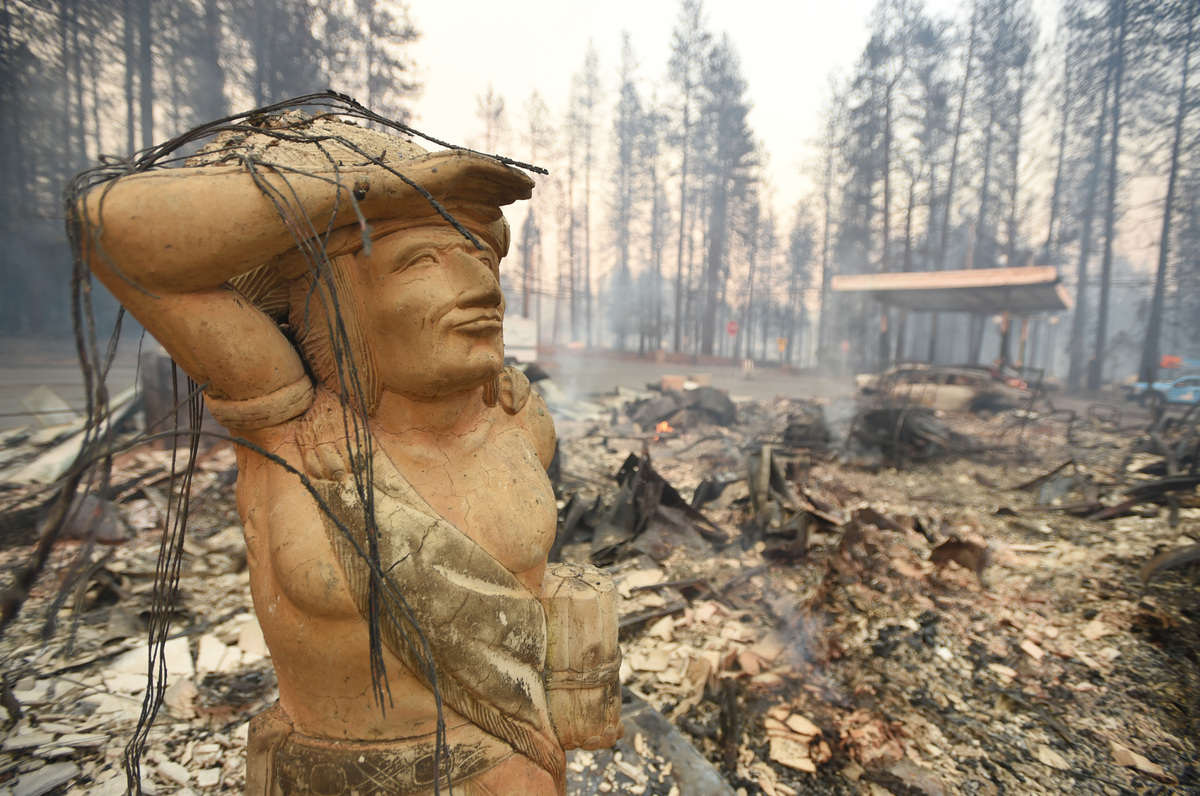 A statue stands amid the rubble of a smoldering property Thursday in Paradise, which was ravaged by the Camp Fire.

President Trump has approved a emergency declaration for California. That authorizes federal assistance to the state.

Strong winds have driven smoke from the Camp Fire almost 200 miles away, fouling air quality in the San Francisco Bay Area and forcing airport officials to cancel some flights. Pedestrians are commonly seen wearing face masks to minimize the smoke they are inhaling.

The Camp Fire is just one of three major wildfires now cutting a fiery path through the state.

Nearly 500 miles south of Butte County, another small community had been struggling to cope with a different kind of trauma Thursday afternoon. Thousand Oaks was still reeling with the news that a gunman had slain 12 victims at a bar in cold blood, when a new danger developed just miles to the east.

Unbeknownst to residents, the Woolsey Fire had just ignited a short drive away.

By Friday morning, some 75,000 homes across Ventura and Los Angeles counties — and extending as far south as the city of Malibu — were already under evacuation orders.

Early Saturday, the flames could be seen over a hillside near Pepperdine University, a private school with nearly 8,000 students. Students, faculty, and staff sheltered took shelter at safe sites on the Malibu campus, the university tweeted.

The wildfire, which has now burned 35,000 acres, was also complicating those evacuation efforts by finding footholds on both sides of one of the region's main thoroughfares, the 101 Freeway.

"We know we have a significant number of structures lost," said Los Angeles County Fire Chief Daryl Osby as quoted by the Los Angeles Times. "I would estimate at least 100."

Elsewhere in Ventura County, mere miles to the west, a third wildfire ignited within an hour of the Woolsey Fire. Now known as the Hill Fire, that fast-moving blaze has consumed some 6,100 acres of land. It has forced evacuations at Naval Air Station Point Mugu and at California State University, Channel Islands along with several communities near the southern Ventura coastline.

All told, Mark Ghilarducci, director of the California Office of Emergency Services, says the three wildfires have forced more than 250,000 people to evacuate their homes across the state. Acting Gov. Gavin Newsom has also declared a state of emergency in Los Angeles, Ventura and Butte counties.

A local couple recorded their own harrowing escape from the region, posting a video on Facebook that recalls scenes from an apocalyptic film.

"Heavenly Father, please help us — please help us to be safe," the woman prays in the passenger seat, choking back tears as their vehicle threads a path toward safety through billowing clouds of ash and embers.

Another resident told Jeremy Siegel of member station KQED that as she attempted to get out of the area, "we were engulfed in flames — both sides of the road." She had to turn her vehicle around and head in another direction to escape, but that all the while, it "scared me to death."

President Trump commented on the fires in a tweet early Saturday. "There is no reason for these massive, deadly and costly forest fires in California except that forest management is so poor. Billions of dollars are given each year, with so many lives lost, all because of gross mismanagement of the forests. Remedy now, or no more Fed payments!"

More than 2,303 firefighters are battling the Camp Fire, which, like the other two fires, has been exacerbated by intensely gusty, dry weather — conditions during which "a simple spark can cause a major wildfire," explains the California Department of Forestry and Fire Protection.

"We are by no means out of the woods as far as the danger posed by the fire," he said. "The amount of uncontained fire line is very large."

To the south, hundreds of firefighters have their own hands full with the Woolsey and Hill blazes. As of Cal Fire's latest updates, neither of the two southern blazes was even partially contained, and the Ventura County Fire Department announced that it would be deploying tactical aircraft to battle the fires "as wind and smoke conditions allow."

"The first part of this fuel bed had not seen fire for many years. Drought-stricken fuels, Santa Ana wind conditions, low relative humidity, high temperatures: it's a recipe for fire," said VCFD Assistant Chief Chad Cook, according to the Ventura County Star.

The warm Santa Ana winds remained strong Friday morning, with gusts as high as 70 mph forecast in certain regions around the two southern fires. The National Weather Service does not expect the gusts to subside until later in the day. But high winds are forecast for Friday night.

At least in the case of the Hill Fire, the location and direction of the blaze are playing to firefighters' advantage, according to Ventura County Fire Chief Mark Lorenzen.

"Fortunately for us, it is burning into the old footprint of the Springs Fire of 2013, and the fire activity there has diminished," he told reporters Friday, adding that this has allowed crews to "focus a little bit more heavily" on the Woolsey Fire instead.

Thousands of cars stood bumper to bumper, trying to ply their way slowly south to safer parts — all while a bank of thick gray smoke crept over the horizon.