Accessibility links
After A Year Of Turmoil, New VA Secretary Says 'Waters Are Calmer' Robert Wilkie is President Trump's second VA secretary; his first was fired after clashing with political appointees. Wilkie insists he's put an end to infighting at the department. 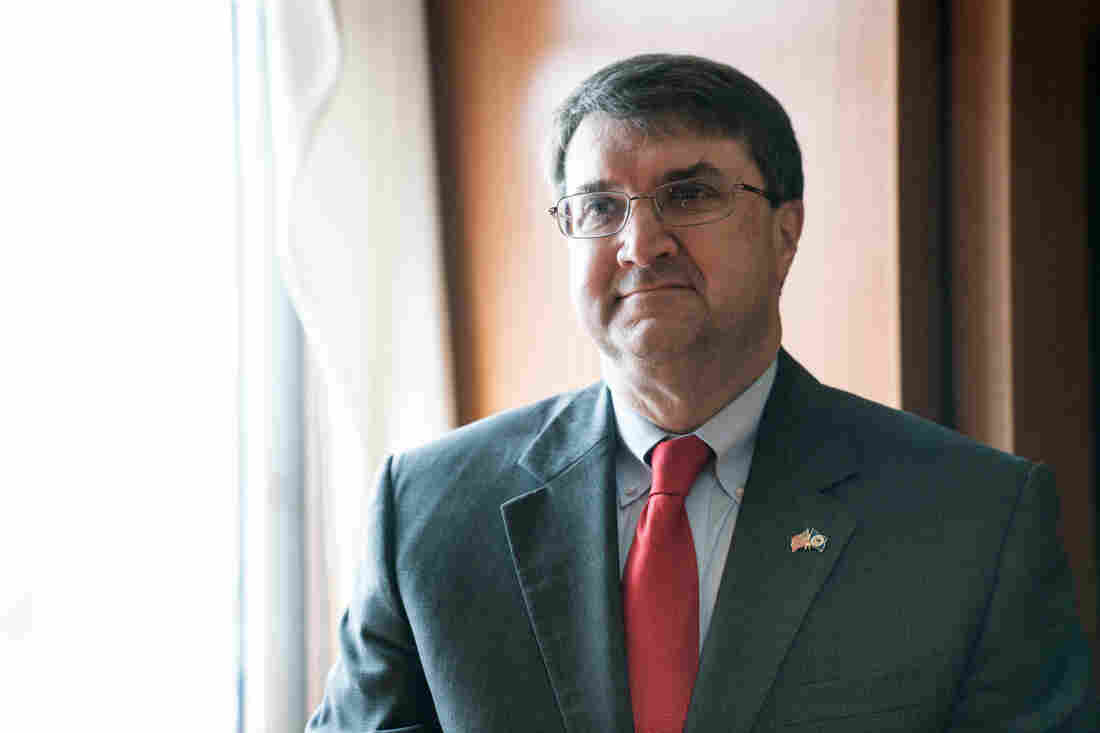 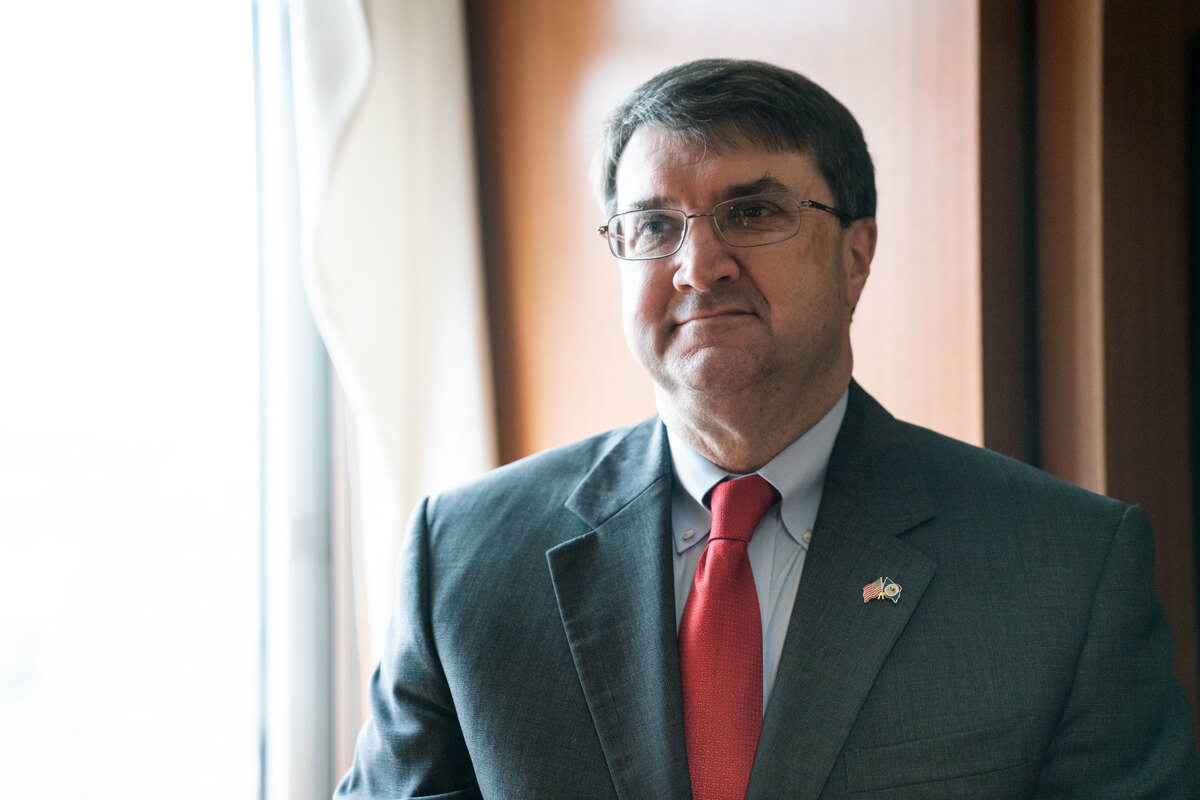 Secretary of Veterans Affairs Robert Wilkie said his department is on the mend after a tumultuous 2018.

In a wide-ranging interview with NPR, Secretary of Veterans Affairs Robert Wilkie said his department is on the mend after a tumultuous 2018.

"I do think it is better, because the turmoil of the first half of this year is behind us, the waters are calmer. We're not where we need to be, but we're heading in that direction," he said.

Early in Donald Trump's presidency, the VA was considered an island of stability in an unpredictable administration.

Secretary David Shulkin was a hold-over from the Obama administration, already familiar with the VA's massive bureaucracy. Bipartisan reforms moved through Congress with relative speed, and Trump could point to a list of legislative accomplishments.

But the president fired Shulkin last March after weeks of intrigue during which VA political appointees plotted openly to oust him. Trump's first nominee to replace Shulkin, Rear Adm. Ronny L. Jackson, sank under accusations of misconduct (which are still being investigated by the Pentagon).

Numerous high-ranking officials left the department, and records showed that friends of the president outside of government - who weren't even veterans - had been lobbying Trump at Mar-a-Lago on how to run the VA.

After a stint as acting VA secretary, Robert Wilkie was confirmed by the Senate last July. Since then, Wilkie says he's been "walking the post," visiting as many VA facilities as he can. And he's reached the same conclusion as many of his predecessors.

"I have been incredibly impressed by the caliber of VA employee I've encountered everywhere, from Alaska to Massachusetts to Florida," Wilkie told NPR's Steve Inskeep.

"I have no quarrel with the quality of medical care our veterans receive. My biggest problem is actually getting them into the system so that they can receive that care, which means the problems are primarily administrative and bureaucratic," said Wilkie, himself a veteran of the Navy and a current Air Force reservist, who counts generations of veterans in his family.

"I am the son of a Vietnam soldier. I know what happened when those men and women came home," Wilkie said. "So that is incredibly important to me."

Wilkie is navigating an important moment for the VA – while major reforms have already been passed by Congress, he's the one who has to implement them. And plenty of political controversy hides in the details.

The VA Mission Act of 2018 was signed into law in June. It's intended to consolidate about a half-dozen programs The VA uses to buy veterans private health care at a cost of billions of dollars, into one streamlined system.

Critics fear that leaning too much on private care will bleed the VA's own medical centers, and lead to a drop in quality there – and amounts to a starve-the-beast strategy of privatization.

Wilkie says that won't happen and is not President Trump's goal, but he has yet to present a budget for expanded private care to the White House and to Congress.

"You're not going to privatize this institution. I certainly have never talked about that with anyone in this administration," Wilkie said.

Wilkie also maintains that he has had little contact with the group of outside advisers who meet with the president at Mar-a-Lago, including CEO of Marvel Comics Ike Perlmutter and Florida doctor Bruce Moscowitz. Records show they had extensive communication with the previous VA secretary, sometimes influencing policy decisions.

"I met with them when I was visiting the West Palm Beach VA - my first week as acting (secretary), and have not had any meetings with them ever since that day," Wilkie said. "I'll be clear. I make the decisions here at the department, in support of the vision of the president."

Despite rumors that Wilkie would clear out many of the Trump political appointees who clashed with former secretary Shulkin, he said he didn't expect more staffing changes.

The one notable departure is Peter O'Rourke, who was acting secretary for two months while Wilkie went through the confirmation process. O'Rourke clashed repeatedly with Congress and the VA's inspector general. Wilkie himself cited a Wall Street Journal report that O'Rourke is poised to go and said he's "on leave."

"I think there will be an announcement soon about a move to another department in the federal government – I know that he's looking for something new," said Wilkie, "He's on leave."

Another major new plan that Wilkie must implement is a $10 billion, 10-year plan to make the VA's medical records compatible with the Pentagon's.

He once again mentioned his father's experience as a wounded combat vet.

"He had an 800-page record, and it was the only copy, that he had to carry with him for the rest of his life. He passed away last year," said Wilkie.

"One of the first decisions I made as the acting secretary was to begin the process of creating a complete electronic health care record that begins when that young American enters the military entrance processing station to the time that that soldier, sailor, airman, Marine walks into the VA."

But that process has actually been underway for a decade – with little to show and about a billion dollars already spent on the effort. The non-partisan Government Accountability Office says it's in part because neither the Pentagon nor the VA was put in charge of the effort — which is still the case. Wilkie says he has signed an agreement with the Pentagon to jointly run it with clear lines of authority.

"I think we'll have more announcements later in the year when it comes to one belly-button to push for that office," he said.

As for staff shortages, another perennial complaint at the VA, Wilkie acknowledged there are 35- to 40,000 vacancies at the agency.

"We suffer from the same shortages that the private sector and other public health services suffer from, particularly in the area of mental health," he said.

"I'm using it to attract as many people as we can into the system," said Wilkie

"I had two briefings on the same day and two different numbers as to how many people this agency employs."

Wilkie says he's in the process of finding out the answer to that question, and many others, as he starts his second 100 days in office.