Accessibility links
At Least 25 Dead In California's Raging Wildfires More than 250,000 have been driven out of their homes as the state was engulfed by five identified fires, from north to south. 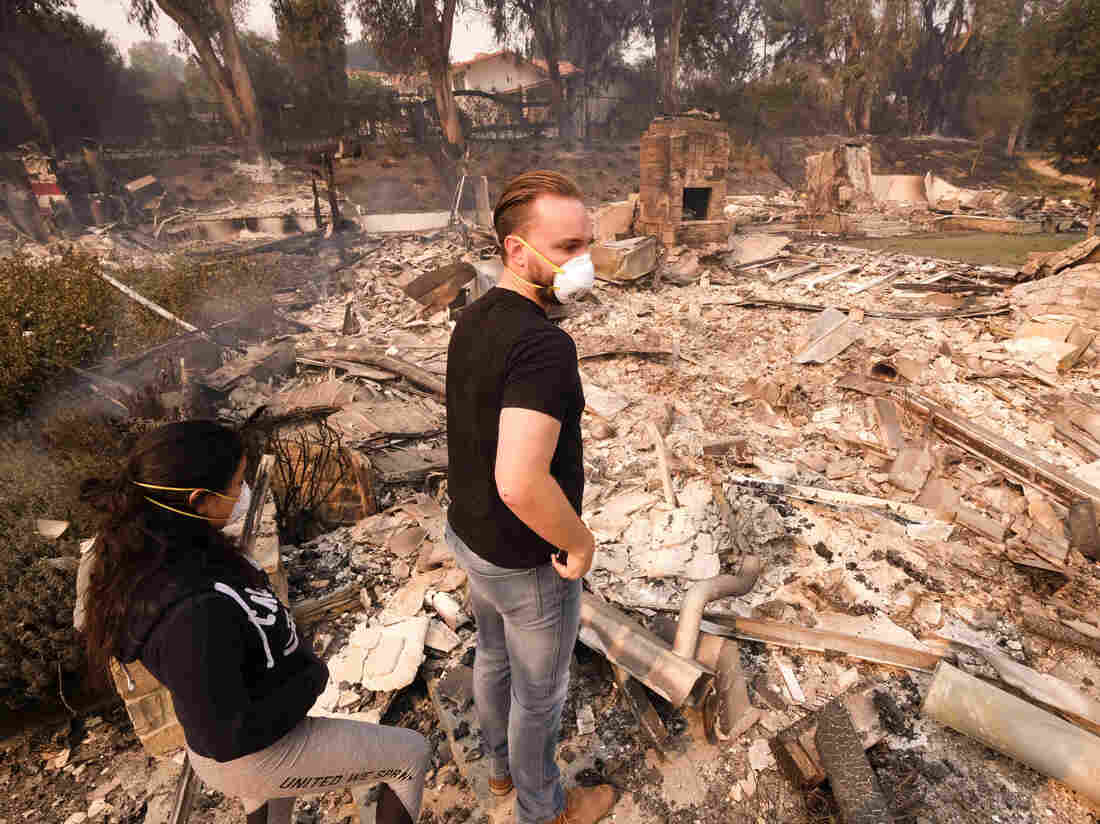 A California man and his girlfriend return to his burned-out home in Malibu on Saturday. Ringo H.W. Chiu/AP hide caption 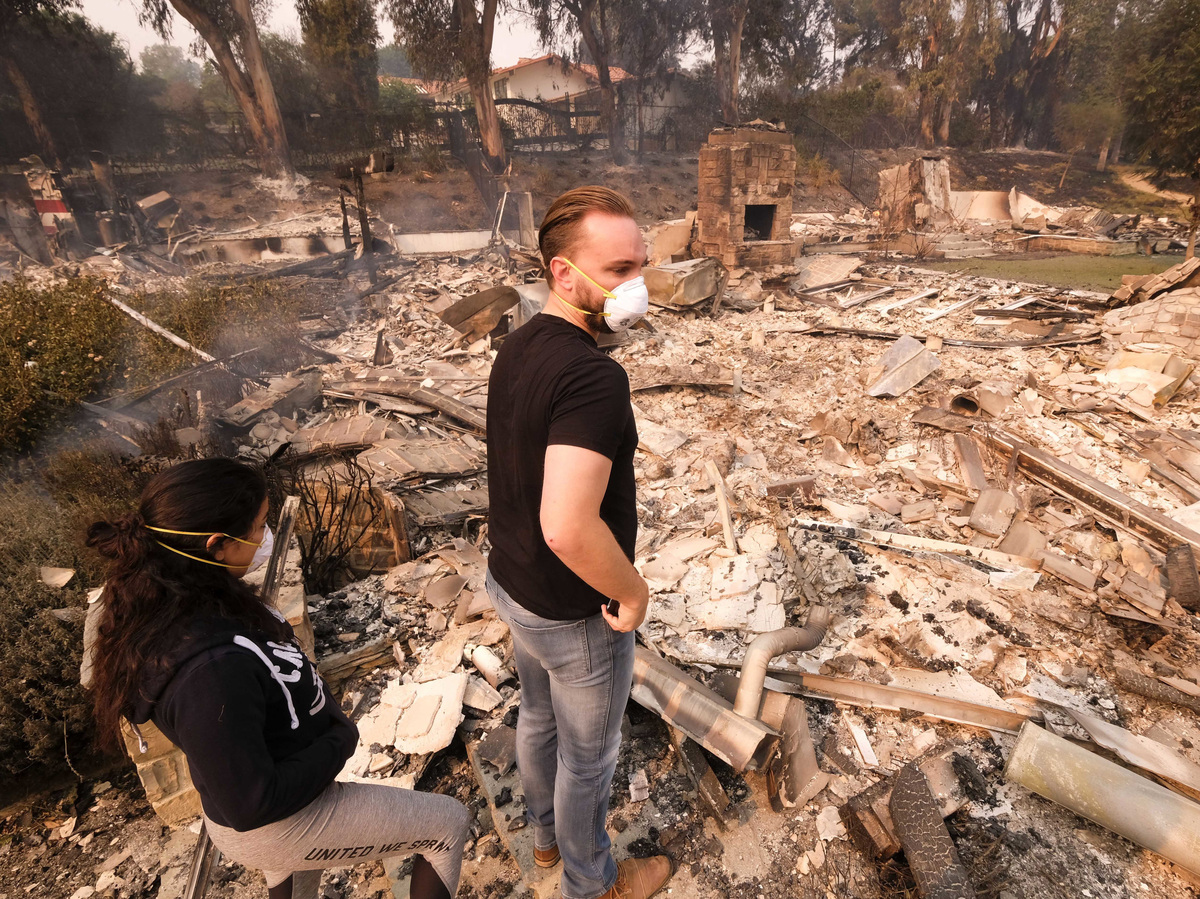 A California man and his girlfriend return to his burned-out home in Malibu on Saturday.

Altogether, at least 25 people have died and more than 250,000 people have been driven out of their homes as California was engulfed by five identified fires, from north to south, on Saturday. Strong winds, low humidity, drought and vegetation so dry it has acted like matchsticks have exacerbated the flames.

Twenty-three deaths in the north of the state combined with two bodies discovered on Saturday in a residential neighborhood in Malibu, Calif., brought the statewide total to 25.

"One firefighter went to his house, knocked down the flames and figured his house was going to make it," Scott McLean, a deputy chief with the California Department of Forestry and Fire Protection, told NPR. "He came back, and it had burned to the ground."

In addition to the nine confirmed fatalities, Butte County Sheriff Kory Honea said in a press briefing Saturday, 14 more bodies have been found, bringing the total dead to 23 in the north of the state.

As the sheriff's office reported earlier, five had been found inside cars that were overwhelmed by flames, three outside residences and one inside a home. The names of the victims have not been released.

He added that the fire took less than two hours to reach the small town of Paradise, which it proceeded to devour.

Some people, attempting to flee the fire, were stuck in traffic and left their cars behind to run with their families.

According to Cal Fire, the fire has grown into 100,000 acres and was 20 percent contained by Saturday morning. It was still burning in Paradise, and authorities estimated the fire may be fully contained by Nov. 30.

Nearly 6,500 residences have been destroyed and another 15,000 threatened, according to emergency officials. Authorities expect that strong northeastern winds will start up again in the evening, potentially spreading across one of California's biggest lakes into the city of Oroville.

More than 3,200 personnel are involved in the firefighting effort. 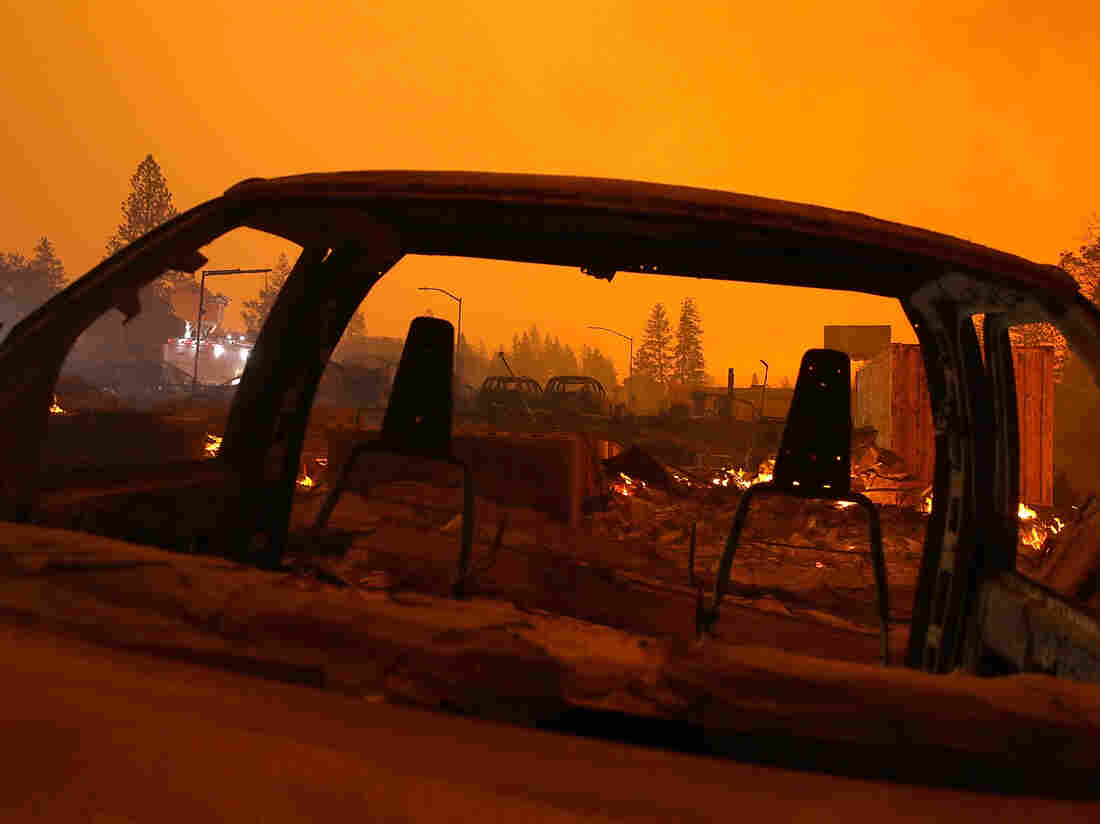 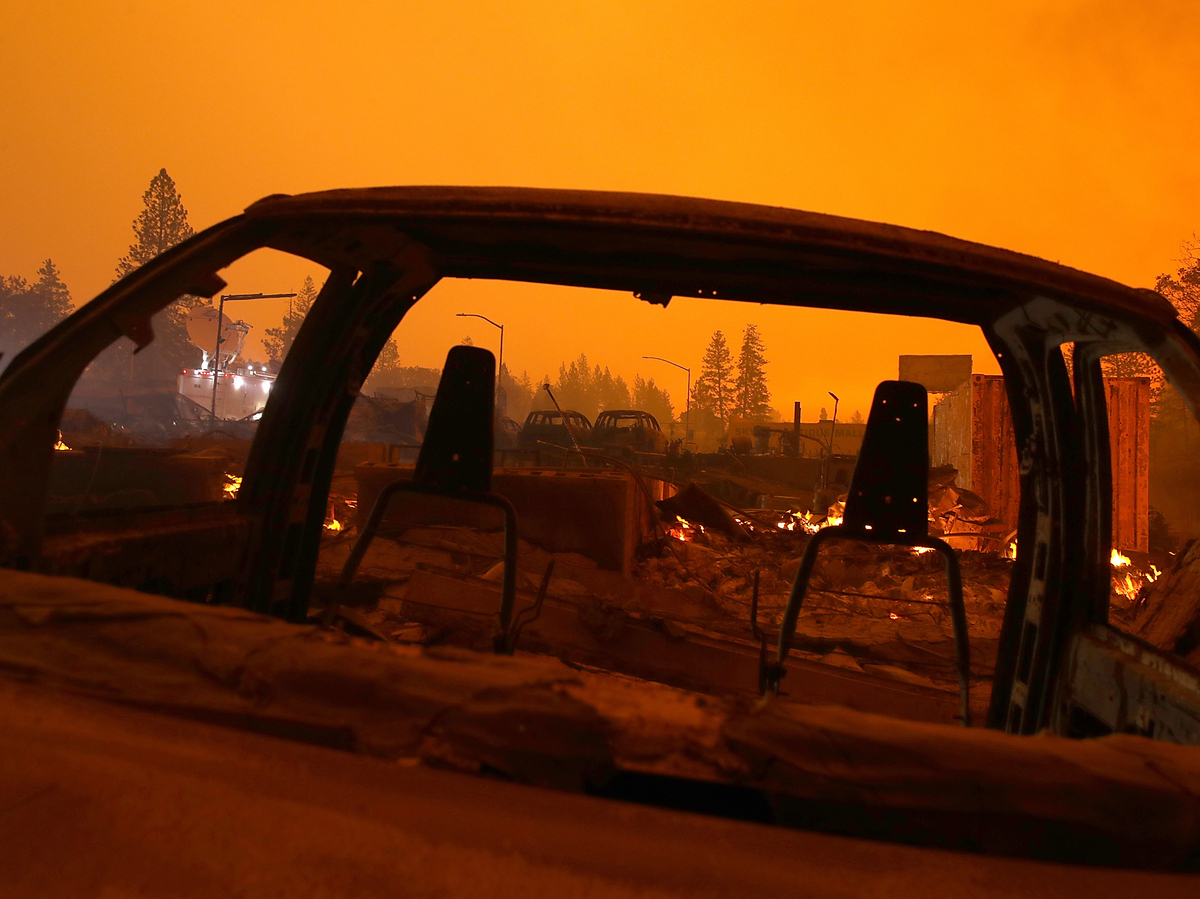 About 170,000 residents and 50,000 homes are under evacuation orders that remain in place for Hidden Hills, Calabasas, Agoura Hills, Westlake Village and Malibu, said John Benedict, a Los Angeles County Sheriff's Department chief, in a press briefing on Saturday.

In Malibu, investigators are looking into the deaths of two people after their bodies were found "severely burned inside of a stopped vehicle located on a long, residential driveway," Benedict said, but added that no further information was available.

The Woolsey Fire, a brush fire that started Thursday some 500 miles south of the Camp Fire, more than doubled in size from Friday to Saturday. It crossed U.S. Highway 101 just a few miles east of Thousand Oaks, where 12 people were killed in a bar shooting Wednesday night.

Crews were battling extreme flames on steep terrain. The fire has shrunk to 70,000 acres, up to 5 percent containment compared with this morning's zero percent, according to Cal Fire.

Flames sent thousands fleeing after mandatory evacuations in Los Angeles and Ventura counties. Officials said they had not been able to tally the number of homes that were destroyed, the Los Angeles Times reported, but sheriff's officials in Ventura County put the number at 50 or more.

Another fire, called the Hill Fire, measured a little more than 4,500 acres on Saturday. "It seems to be stopped and burned into an area where firefighters can get a handle on it," McLean said. It traveled into an old burn scar, where a previous fire had passed years ago. As it thinned, firefighters were able to get closer and control it — at least temporarily.

"These winds will be severe if not more severe than we saw in the last few days," Cal Fire Unit Chief Scott Jalbert said. From Sunday through Tuesday, winds are projected to jump to 30 to 40 miles per hour.

Ventura County Supervisor Linda Parks thanked President Trump for approving an emergency declaration for California but also called for a major disaster emergency declaration that would free up federal resources to support the recovery process. "We do have to remember we aren't out of it yet," Parks said.

Lady Gaga, Alyssa Milano and Kim Kardashian West were among the California residents who had to flee their homes.

"I am thinking so deeply for everyone who is suffering today from these abominable fires & grieving the loss of their homes or loved ones," Lady Gaga said on Twitter. "I'm sitting here with many of you wondering if my home will burst into flames. All we can do is pray together & for each other. God Bless You." 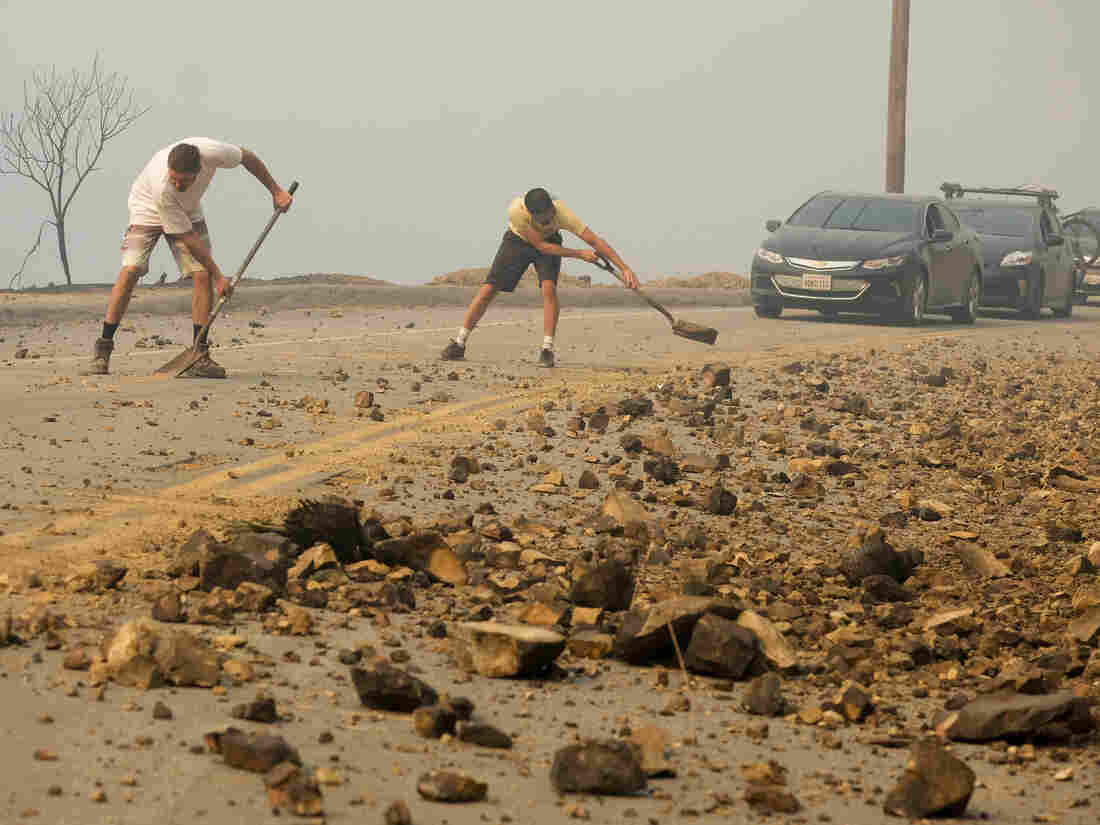 Malibu residents clean up the road after the destruction of the Woolsey Fire on Saturday. Ringo H.W. Chiu/AP hide caption 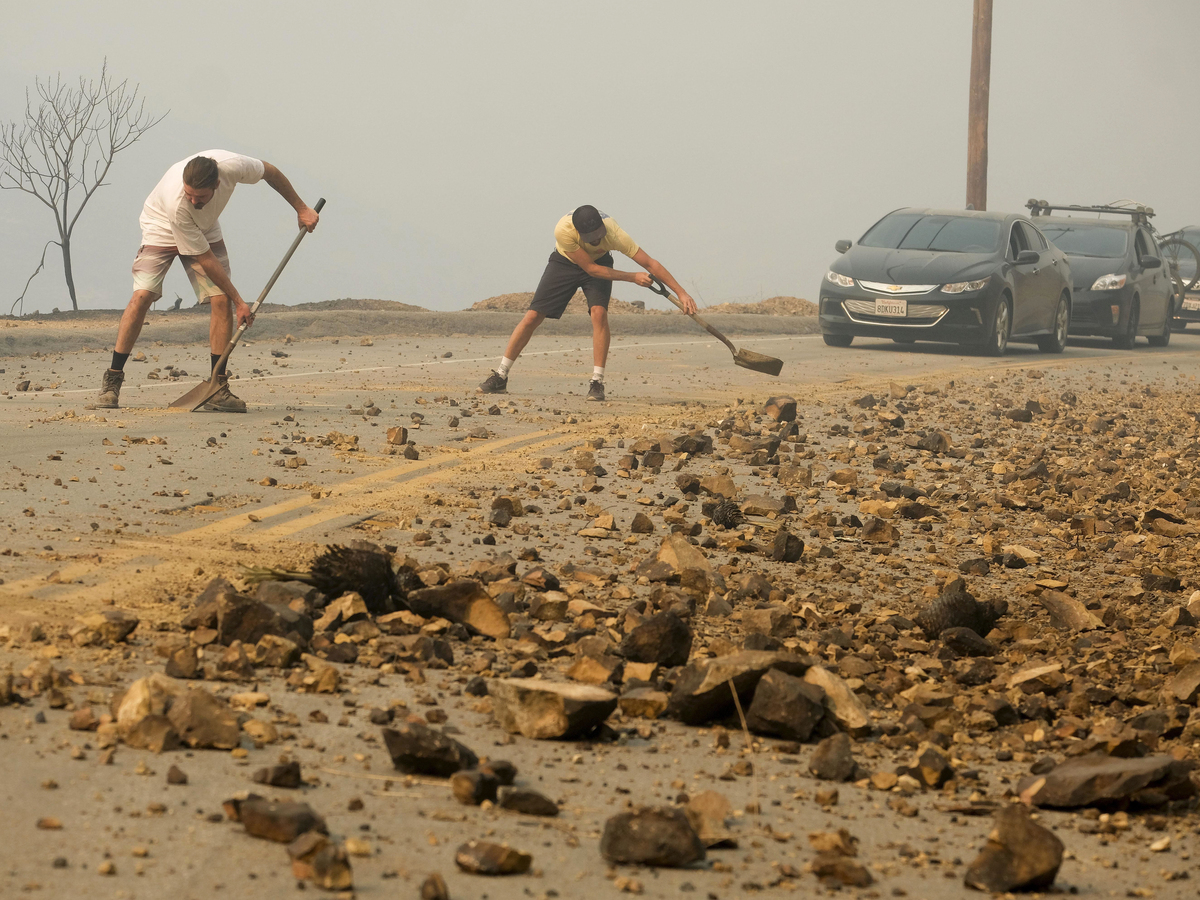 Malibu residents clean up the road after the destruction of the Woolsey Fire on Saturday.

"I'm waiting to hear the fate of my home. They won't let us in the area," Milano wrote Saturday morning local time, before adding, "There are no words for this kind of devastation."

"I heard the flames have hit our property at our home in Hidden Hills but now are more contained and have stopped at the moment. It doesn't seems like it is getting worse right now, I just pray the winds are in our favor," Kardashian West said.

Cher wrote on Twitter that she was worried about her house "but there is nothing I can do." She said she has had a house in Malibu since 1972 and "can't bear the thought of there being no Malibu."

Authorities, fearful of looting, have ordered some 200 deputies to protect burned neighborhoods, according to The Associated Press.

The Los Angeles Zoo announced that some of its animals, including lemurs and birds, had been relocated but that a brush fire in nearby Griffith Park did not enter its grounds. "The animals that were relocated have been safely moved back to their habitats and are doing well," the zoo said. "We are thinking of those who are battling the wildfires still threatening Los Angeles and Ventura counties."

"A big thank you to firefighters from across the country who are helping California's firefighters battle these blazes," Sen. Kamala Harris tweeted Saturday. "We appreciate your work and could not be more grateful."

Trump saw a political link to the wildfires, writing on Twitter: "There is no reason for these massive, deadly and costly forest fires in California except that forest management is so poor. Billions of dollars are given each year, with so many lives lost, all because of gross mismanagement of the forests. Remedy now, or no more Fed payments!"