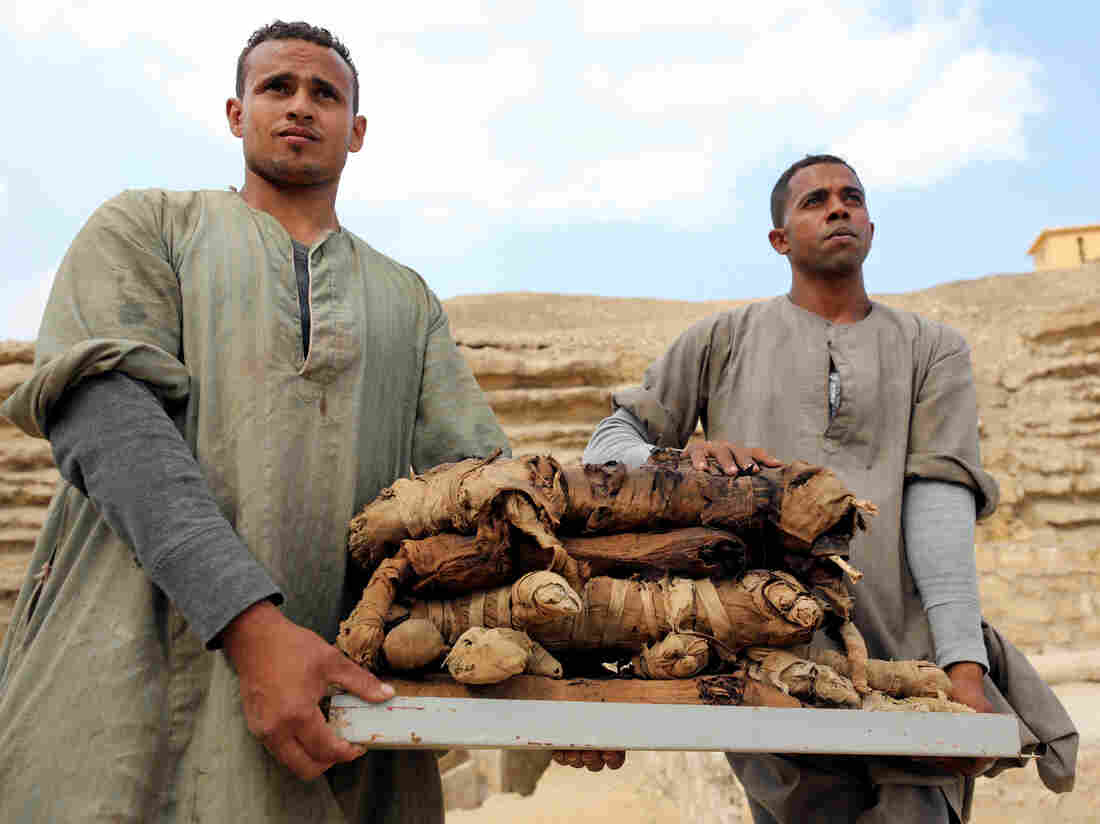 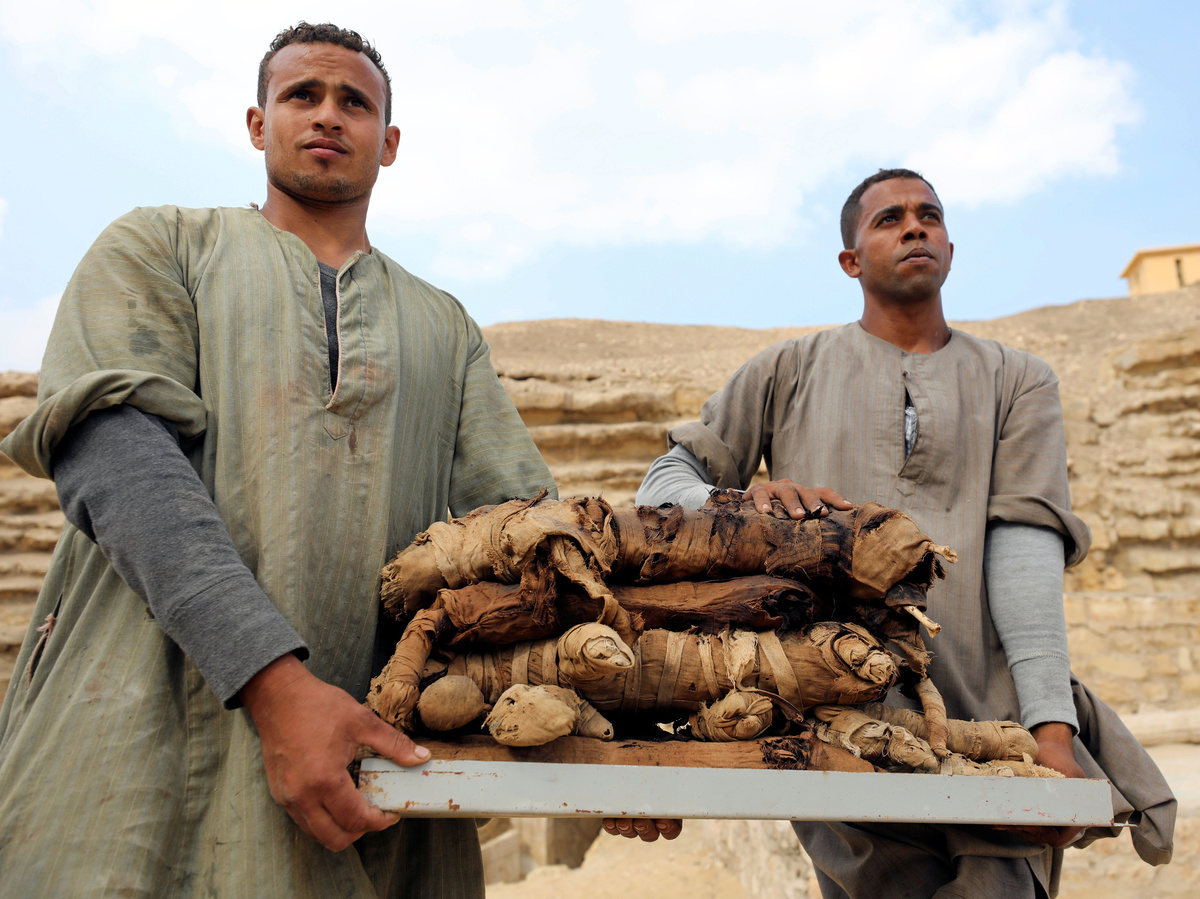 Men carry mummified cats from a tomb at the Saqqara necropolis in Egypt on Saturday.

The more archaeologists continue to explore the tombs of ancient Egypt, the more evidence mounts that ancient Egyptians admired cats — and loved mummifying them.

Egypt's Ministry of Antiquities announced Saturday that a team of Egyptian archaeologists excavating a 4,500-year-old tomb near Cairo has found dozens of mummified cats. Also in the tomb were 100 gilded wooden cat statues, as well as a bronze statue of Bastet, the goddess of cats.

The discoveries were made at a newly discovered tomb in Saqqara, the site of a necropolis used by the ancient city of Memphis. The tomb dates from the Fifth Dynasty of the Old Kingdom, and archaeologists have found another one nearby with its door still sealed — raising the possibility that its contents are untouched.

The Ministry of Antiquities was clear about its goals in announcing the discoveries: attracting visitors back to Egypt's heritage sites, as the country has experienced a significant drop in tourists since the 2011 mass protests that overthrew dictatorial President Hosni Mubarak.

The ministry tweeted photos of the findings. Pictures of the cat statues took front and center — with the ancient felines looking proud and cool, like an upscale, 4,500-year-old version of what a cat fancier today might try to commission.

#Tens of #cats #mummies were unearthed in #Saqqara #necropolis along with 100 wooden #gilded #statues of #cats and a bronze one dedicated to the cat #goddess #bastet. pic.twitter.com/g0oSQPBhL8

The mummified cats themselves ... well, those images are more unsettling, though they offer incontrovertible evidence that mummification is highly effective.

"What they did is to observe their behavior," she said, and create gods and goddesses in their image — much as they did with other animals, including dogs, crocodiles, snakes and bulls.

And while cat mummies are fascinating, Catanzariti said they were also pretty common in ancient Egypt, where cats were bred for the purpose. "In the 1890s, people from England went to Egypt and they collected all these mummies. One cargo was 180,000 of them." 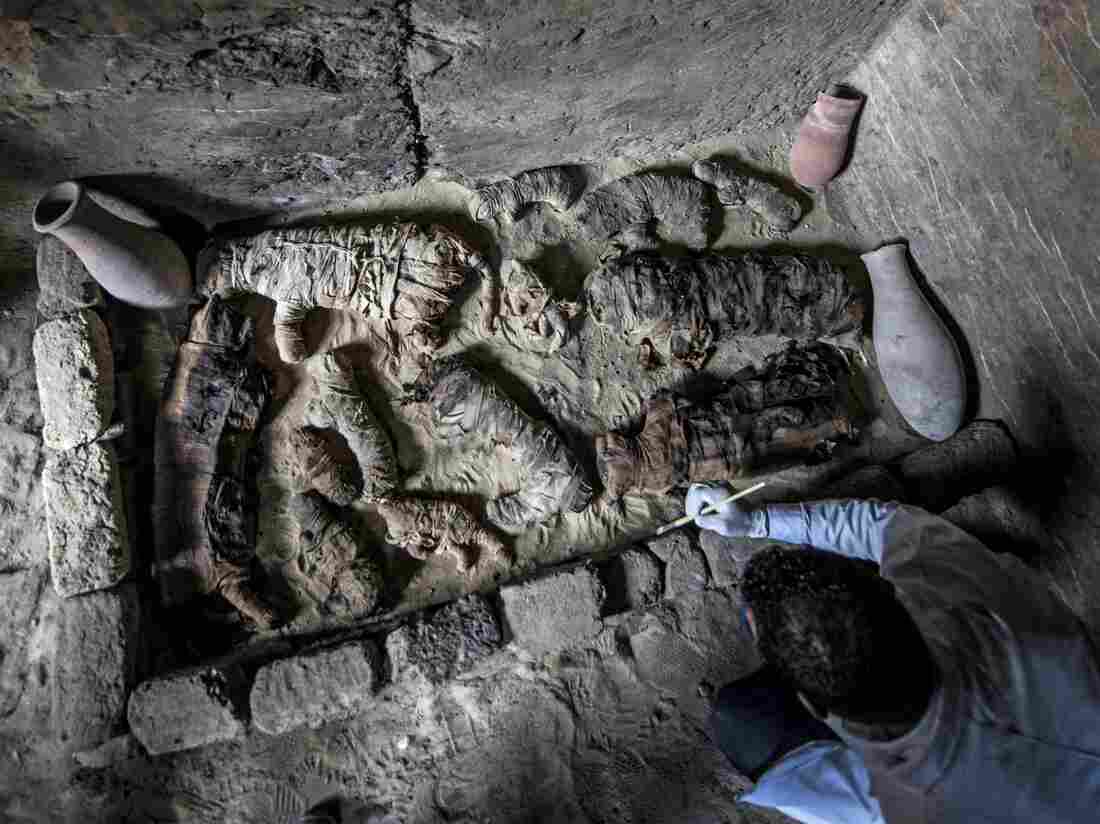 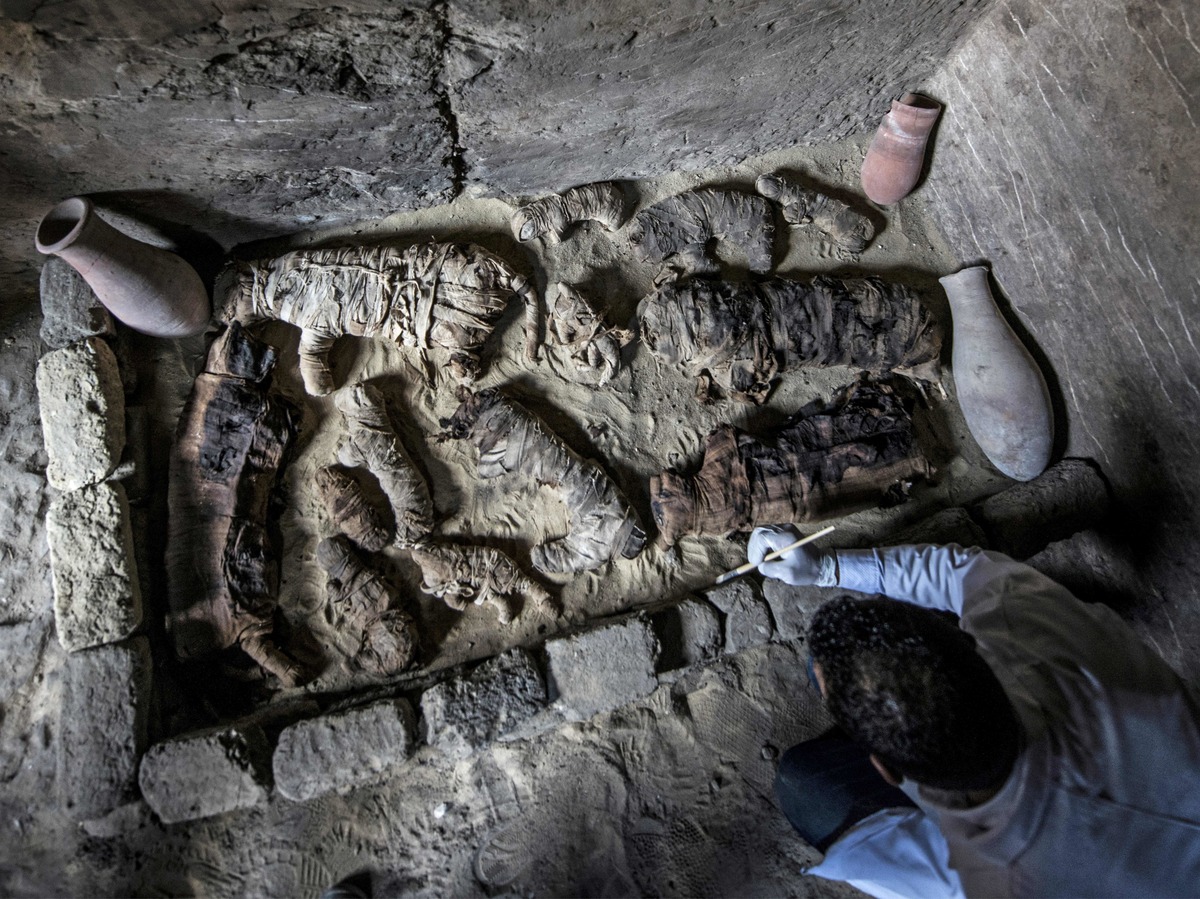 An Egyptian archaeologist cleans mummified cats in the necropolis at Saqqara, south of Cairo, on Saturday.

Perhaps that's why the antiquities ministry made a bigger deal about something else they discovered in the tomb: mummified scarab beetles. Two large specimens were found wrapped in linen, apparently in very good condition. They were inside sarcophagi decorated with drawings of scarabs.

"A couple of days ago, when we discovered those coffins, they were sealed coffins with drawings of scarabs. I never heard about them before."