Accessibility links
Mysterious Suitcase Helps Connecticut Man Discover His Grandfather's WWII Service After decades, a Connecticut man found his grandfather's grave in the Netherlands, and the Dutch family members that were the grave's volunteer caretakers. 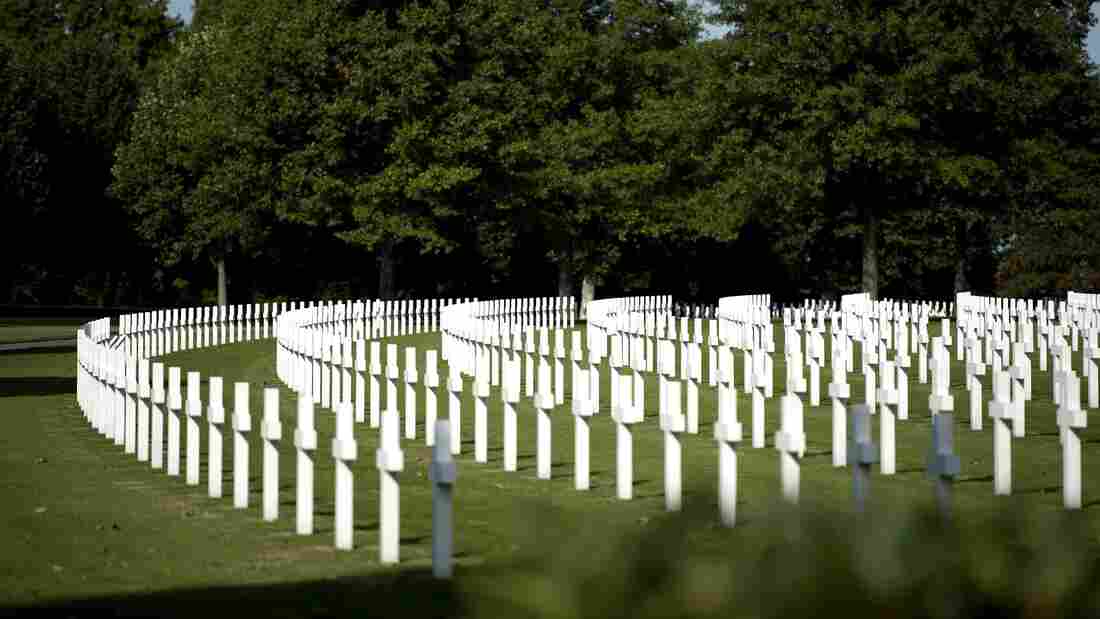 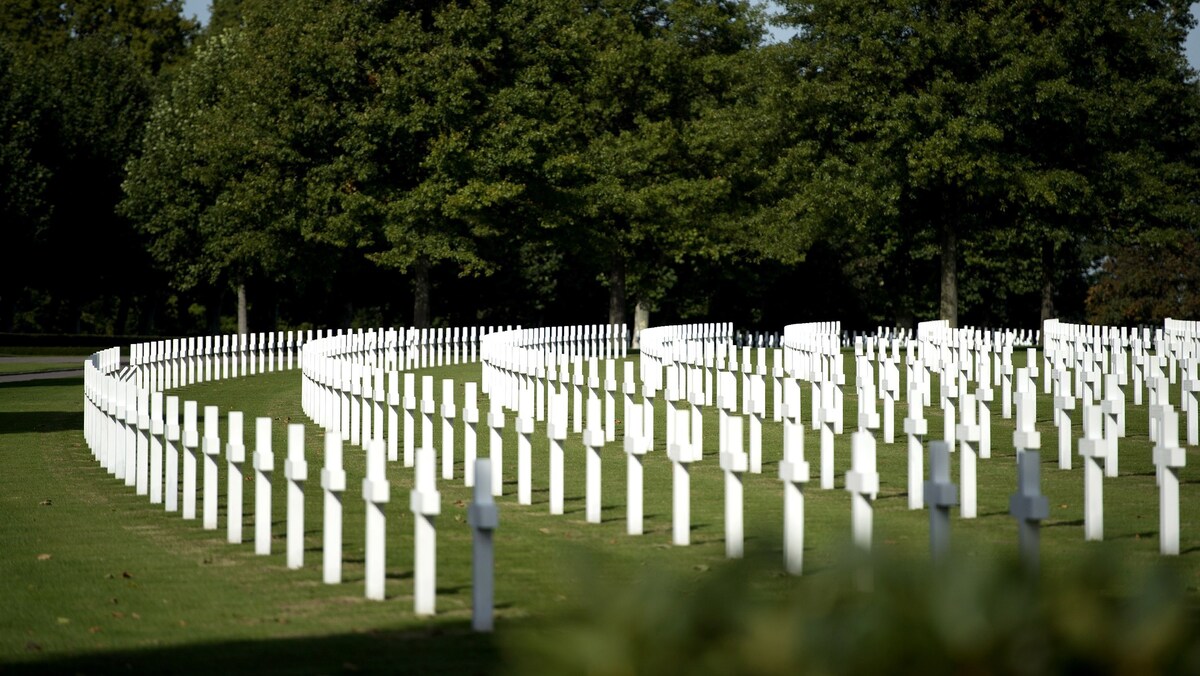 David McGhee grew up with two mysteries. One was his grandmother's suitcase — it was full of stuff she shared with no one. The other mystery was about the boy's grandfather, a soldier who died before David was born.

David was only 9 years old when he first got a glimpse of what was inside his grandmother's suitcase.

"She was actually going in for something else, but I saw that picture," David said, asking her who was in that photo. It was her parents, she told him. She then quickly zipped up the suitcase. She didn't speak another word about it.

Effie Payne kept that blue leather and denim suitcase under her bed. She was the only person who knew what was inside it. Not even her three children had a clue.

Effie rarely talked about her husband.

Being an only child, David was often in his own world, and his curiosities didn't emerge until well after Effie's death about 20 years ago.

When his grandmother died, it was hard.

"It was very emotional," he said. "My grandmother and I were very close."

There was one thing he wanted when she passed — that suitcase. But it sat in his basement, gathering dust, for over a decade.

"I had to be emotionally ready to open this up," he said.

Eventually, when he developed an interest in genealogy, there was no question in his mind where he would begin. 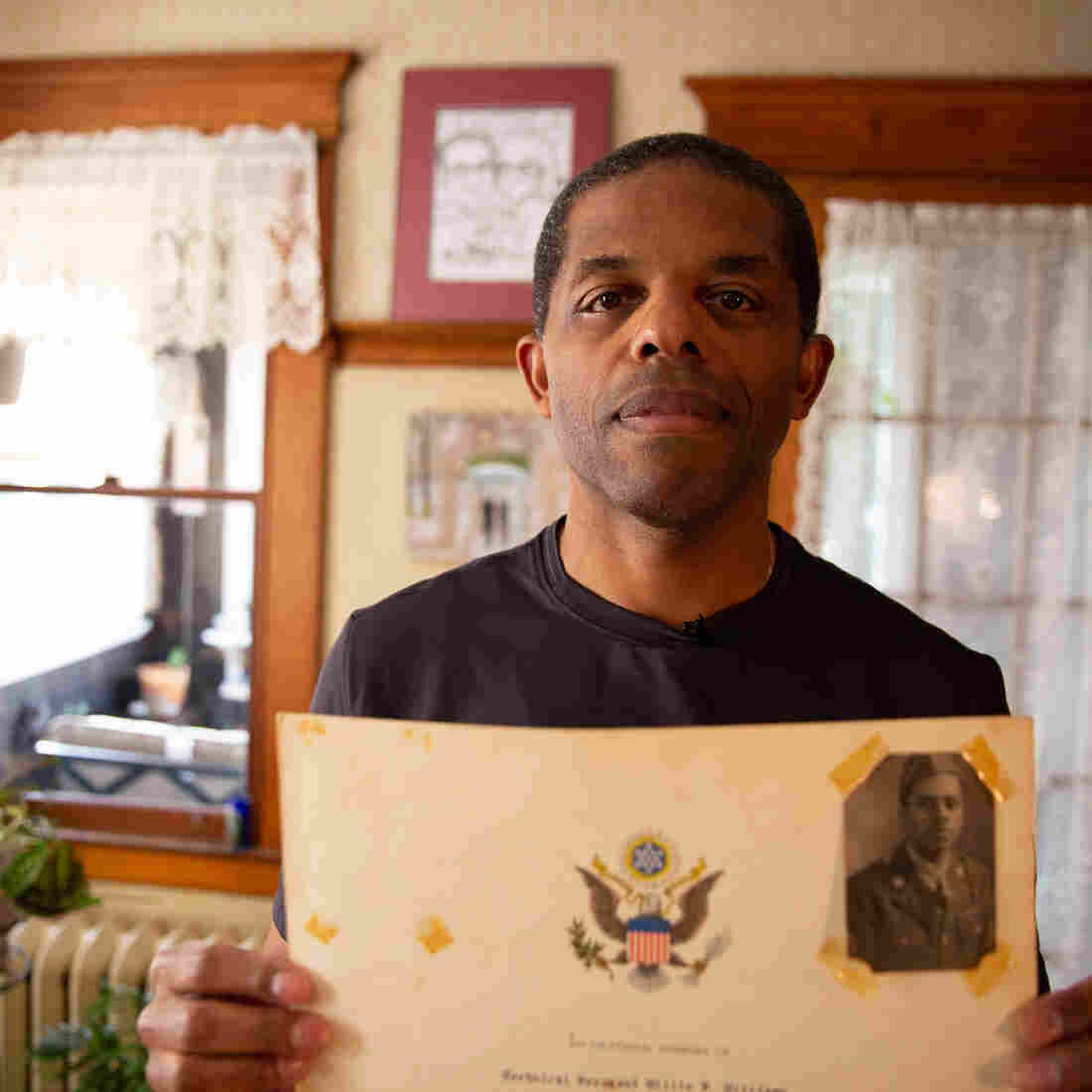 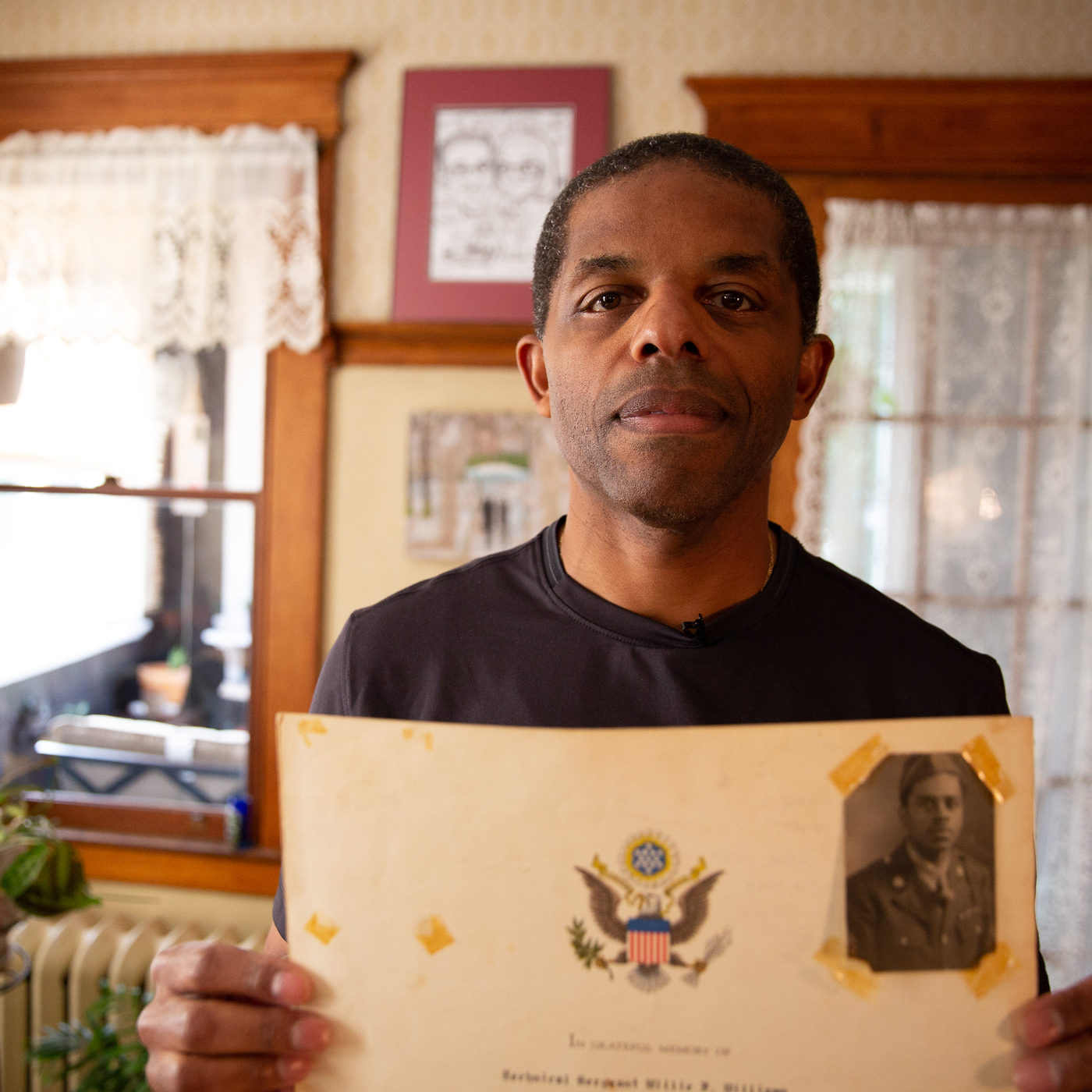 David McGhee holds up an award given to his grandfather, Sgt. Willie F. Williams, for his military service in World War II.

Treasure-trove of a forgotten soldier

When he unzipped the suitcase, the first thing that hit him was the smell — old papers and photos and random ephemera had developed a strong, musty odor. It reminded him of its age, and its potential meaning.

Inside sat a treasure-trove of information about David's grandfather, Sgt. Willie F. Williams. Williams had served in Europe during World War II, and died in Germany, years before David was born. Nobody ever talked about him, including David's grandmother.

"This suitcase was started with documents that were sent to her from the military and it continued to grow until the date of her death," David said.

There were photos, commendations and medals. There were Western Union telegrams, including the one sent to her upon her husband's death.

David's grandfather had remarkable penmanship. During his service, he drew cross-sections of German bombs and meticulous trekking maps. The suitcase also includes a handwritten letter — in perfect cursive — from Sgt. Williams to his wife, from "somewhere in Germany." 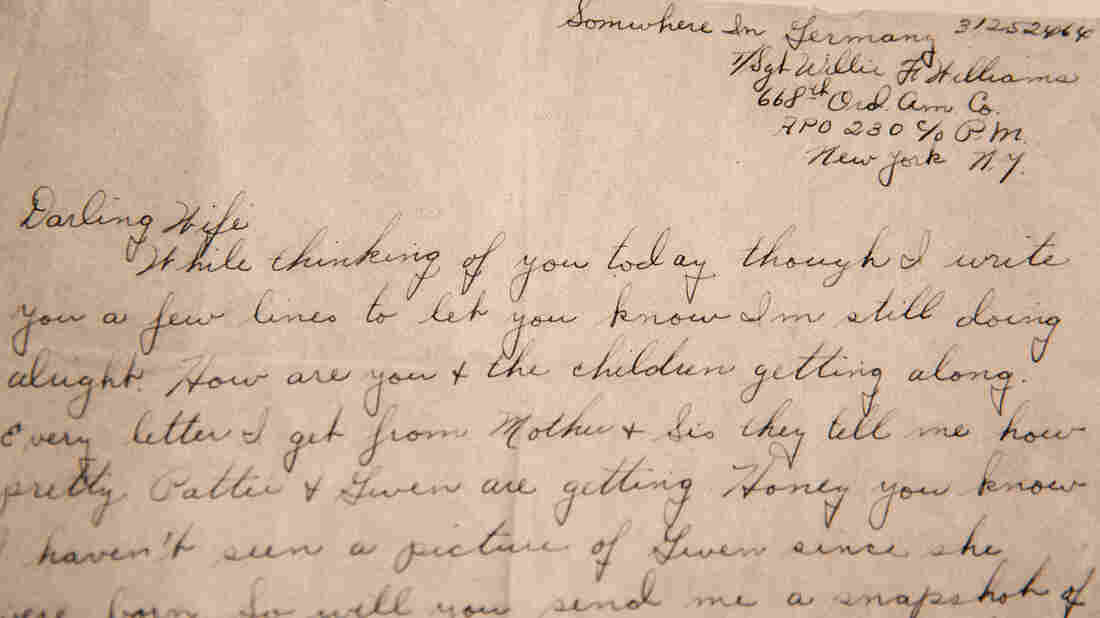 A letter written by Sgt. Willie F. Williams to his wife Effie from "somewhere in Germany" during World War II. The letter was found in a suitcase never opened by anyone but Effie. Ryan Caron King /Connecticut Public Radio hide caption 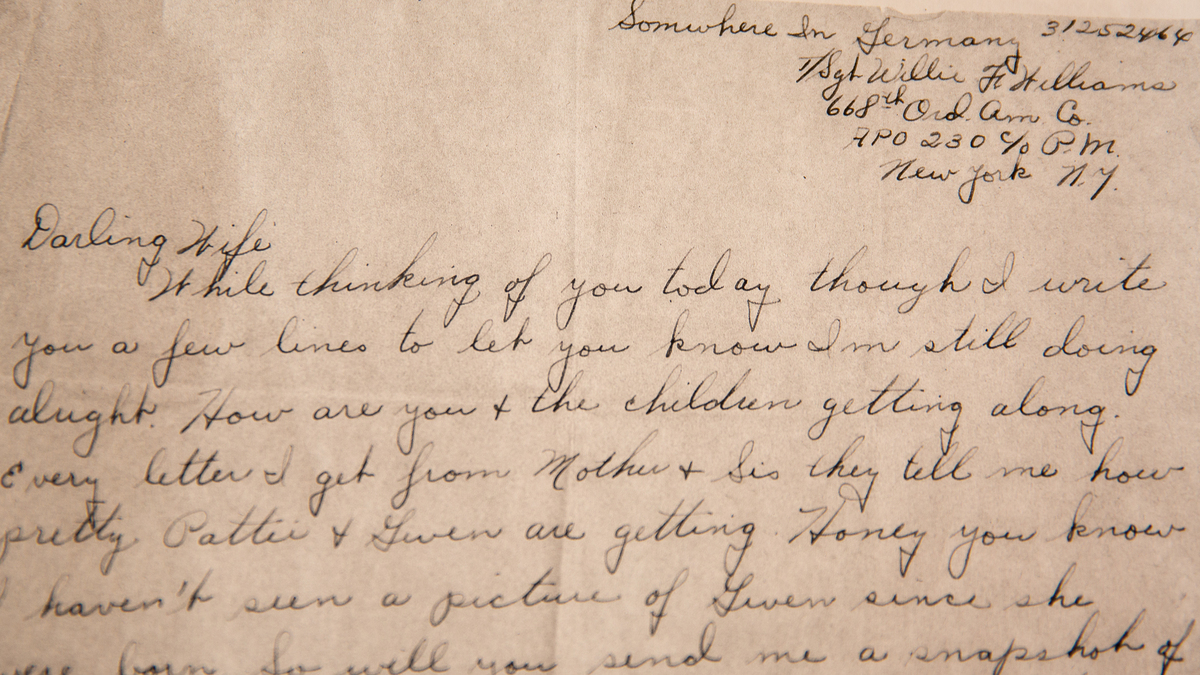 A letter written by Sgt. Willie F. Williams to his wife Effie from "somewhere in Germany" during World War II. The letter was found in a suitcase never opened by anyone but Effie.

The records in that suitcase showed David that his grandfather had served in an African-American unit, managing ammunition and explosives. David also learned that he died in an explosion.

David McGhee went on a voyage of discovery when he finally opened his grandmother's suitcase, full of mementos of her husband who died in World War II.

But one thing the suitcase didn't tell him? Where his grandfather was buried. So he turned to more modern research tools — the Internet.

It wasn't long before he and his wife were on a plane, flying nearly 4,000 miles across the Atlantic Ocean, on Memorial Day, to the Netherlands.

Black liberators of the Netherlands

At the American Military Cemetery in Margraten, large oak trees flanked a path that wound through a sea of crosses and stars of David. An American flag waved in the distance.

Among the dead buried here are 172 African-American soldiers, killed during World War II. Americans helped liberate the Netherlands from the Nazis in 1945.

People should know that history keeps out things that are not fitting in at the time the history is written.

On a warm, fall day, historian Mieke Kierkels was looking for one specific grave. She walked between the headstones and, minutes later, found the one she was looking for.

"We are standing in front of the gravestone of Willie F. Williams," Mieke said. "David McGhee's grandfather."

Sgt. Williams (whose name is also spelled Willy F. Williams in some records) was killed in June of 1945, and buried in Margraten. That was the little known piece of history discovered when David turned on his computer, and typed in his grandfather's name.

He found a website called Black Liberators of the Netherlands — it was Mieke Kierkels's project.

She started the site to learn about the black soldiers buried there. Military records have a code to indicate the soldier's race, but beyond that, there's not much else Kierkels could learn about the buried soldiers. It's hard to get more information because a lot of records were kept by veterans organizations, and most didn't allow black members in those days.

"People should know that history keeps out things that are not fitting in at the time the history is written," Mieke said.

Her website lists the soldiers' names and where they're from, but Kierkels wants their stories. She's only been able to get information on a handful of them. David's suitcase, though, offers a window to one soldier's story, so at least his service won't be lost to history.

"You have to really understand the African American experience to know that part of the history is missing," David says. "And that's why this project is so important to me, because it's now being told."

In the Netherlands, these stories are also being kept alive.

David's grandfather's grave has a caretaker — a local couple, Jan and Jos Smeets. They never met Sgt. Williams, but they visit the site on special occasions and lay flowers. When they die, their daughter will take over.

All 8,301 American graves in Margraten are adopted by Dutch families. It's something David never expected to find.

"To know that Jan and Jos Smeets have been tending to his grave and knowing that others are being tended to the same way — it's hard to put into words," he said.

When David visited Smeets's home, he found a framed photo of his grandfather, Sgt. Willy Williams, on display next to the Smeets's own children. It was as if he was family.

"To go into a foreign country and be greeted by family? It's amazing," David said.