Accessibility links
Rohingya Repatriation Set To Begin, As Amnesty Revokes Award To Aung San Suu Kyi A long-planned deportation of refugees from Bangladesh back to Myanmar is set to begin this week. Rohingya are reportedly fleeing refugee camps to avoid being sent back to the country they escaped. 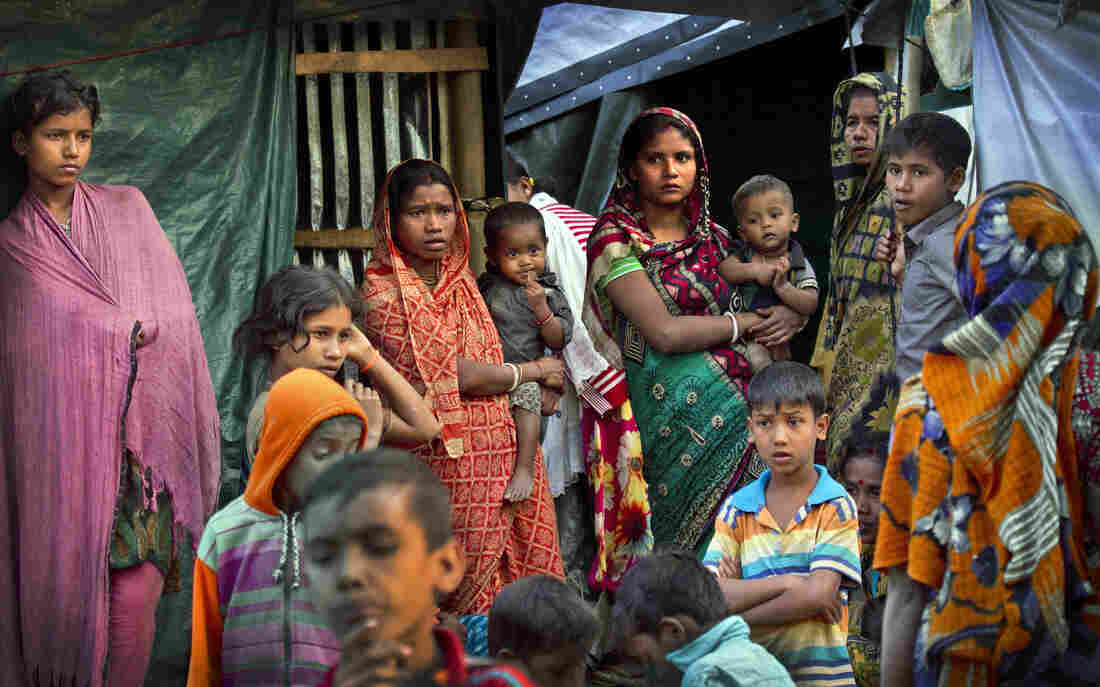 Rohingya Hindu refugees stand outside their makeshift shelters at the Kutupalong refugee camp near Cox's Bazar, Bangladesh, in January. Bangladesh and Myanmar plan to begin the repatriation of hundreds of thousands of Rohingya Muslim refugees who fled from violence in Myanmar. Manish Swarup/AP hide caption 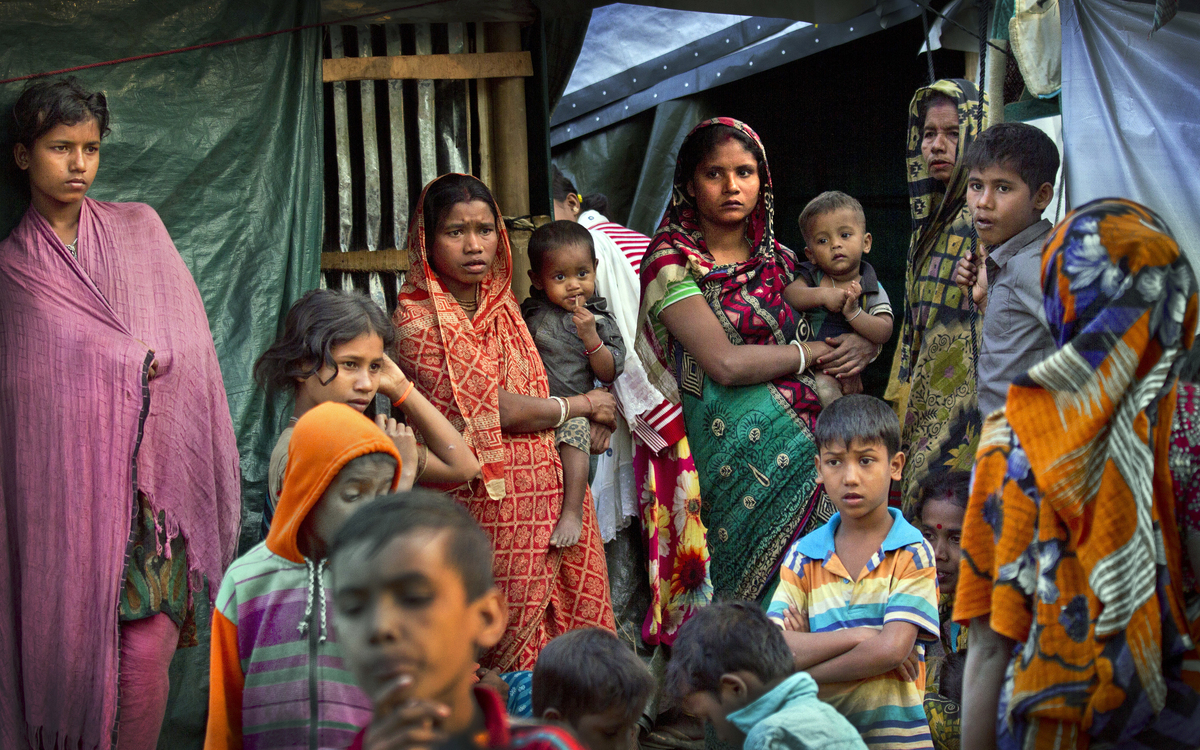 Rohingya Hindu refugees stand outside their makeshift shelters at the Kutupalong refugee camp near Cox's Bazar, Bangladesh, in January. Bangladesh and Myanmar plan to begin the repatriation of hundreds of thousands of Rohingya Muslim refugees who fled from violence in Myanmar.

The long-planned repatriation of Rohingya refugees from Bangladesh back to Myanmar is set to begin later this week — and refugees are reportedly fleeing camps to avoid being sent back to the country they fled. Many refugees have said they fear for their lives if they should return to Myanmar.

Aid groups and international organizations have warned that repatriation, given current conditions in Myanmar, cannot possibly be voluntary, safe and dignified.

"The Bangladesh authorities have said they will not force people to go back, but no return under present circumstances can be voluntary," the International Crisis Group wrote on Monday.

The U.N.'s refugee agency says refugees must be given the chance to independently assess conditions in Myanmar before deciding whether to go home.

The Rohingya are a Muslim minority group denied citizenship in Myanmar and therefore are effectively stateless. They have been subjected to a widespread, lengthy campaign of dehumanization, discrimination and violence in Myanmar, including murders, organized rapes and the torching of villages.

Over the past two years, attacks on Rohingya by Myanmar's military and other armed groups have intensified. The campaign against the Rohingya constitutes genocide, the U.N. says.

Hundreds of thousands of Rohingya have fled the violence. Many have been accepted as refugees in Bangladesh — but not warmly.

Their makeshift refugee camps are precariously situated and vulnerable to flooding and landslides during monsoons. The camps have limited access to education and no legal work opportunities, by design, as Bangladeshi authorities hope to deter the refugees from staying.

For months, the governments of Bangladesh and Myanmar have been planning the repatriation of these hundreds of thousands of refugees. Authorities had expected to start the process in January, but it was postponed for logistical problems, as NPR's Jason Beaubien reported.

While the governments prepare for repatriation, the refugees themselves have expressed deep concern about their safety in Myanmar.

"We need our rights and our citizenship in Myanmar," another refugee, Shafika Khatun, said. "Now if we go back they'll kill us."

The Refugees Who Don't Want To Go Home ... Yet

Dildar Begum told Beaubien she watched Myanmarese troops kill her infant, her husband and her 5-year-old son, and was repeatedly raped by soldiers while her 10-year-old daughter was beaten. She said knows that Bangladesh won't allow the refugees to remain forever, but she was adamant that she won't return to her home country.

"I would rather drink poison than go back to Myanmar," she said.

Now, as the date of the repatriation approaches, a Rohingya leader told Reuters that refugees are refusing to cooperate:

"Last week, more than 20 individuals on the list of potential returnees submitted by Bangladesh told Reuters they would refuse to return to Myanmar's western Rakhine state, from where they fled, saying that they were terrified. ...

" 'People are so afraid of being identified, they are avoiding Friday prayers at the mosque,' said one refugee, who has fled with his family from Jamtoli to the large Kutupalong camp to evade repatriation."

Myanmar insists it has made preparations for the Rohingya to return safely, as NPR's Anthony Kuhn reported this spring. The government says it has built housing and issued "national verification cards" to Rohingya.

But there are concerns about the land that refugees left behind — specifically, whether it has been seized by the military or whether refugees will be allowed to return to the site of their homes — and there are concerns that the ID cards amount to second-class citizenship. 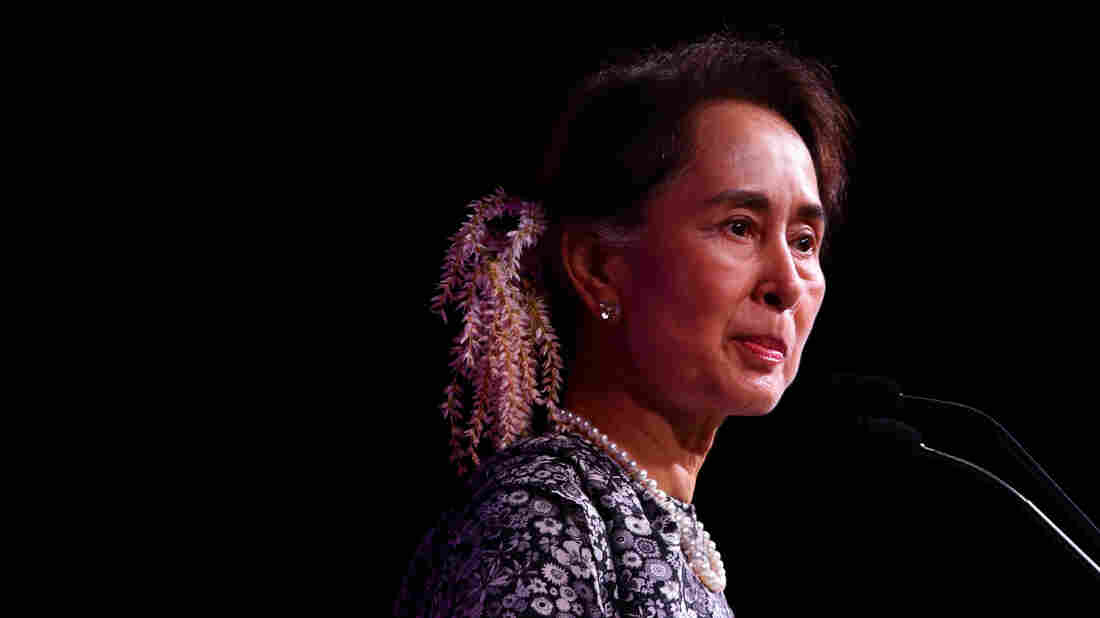 Aung San Suu Kyi speaks during the 33rd Association of Southeast Asian Nations summit on Monday in Singapore. Amnesty International says it has withdrawn the Ambassador of Conscience Award given to Suu Kyi "in light of the Myanmar leader's shameful betrayal of the values she once stood for." Suhaimi Abdullah/Getty Images hide caption 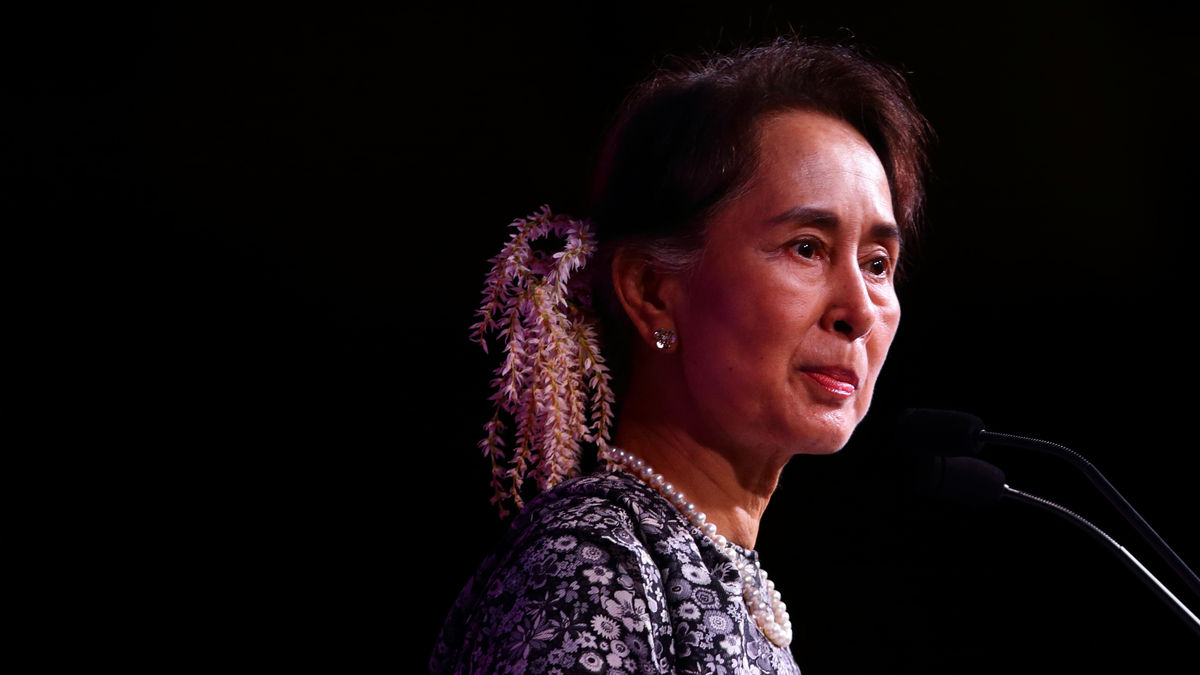 Aung San Suu Kyi speaks during the 33rd Association of Southeast Asian Nations summit on Monday in Singapore. Amnesty International says it has withdrawn the Ambassador of Conscience Award given to Suu Kyi "in light of the Myanmar leader's shameful betrayal of the values she once stood for."

Some Buddhists in Myanmar have taken to the streets to protest the return of Rohingya to the country.

Meanwhile, the human rights group Amnesty International has withdrawn the award it gave to the woman who is now Myanmar's de facto civilian leader, Aung San Suu Kyi. Nearly a decade ago, while she was still under house arrest, Suu Kyi received Amnesty's highest honor, called the "Ambassador of Conscience" award, for her defense of human rights.

Amnesty said it was withdrawing the award "in light of the Myanmar leader's shameful betrayal of the values she once stood for."

The group criticized Suu Kyi's "apparent indifference to atrocities committed by the Myanmar military and increasing intolerance of freedom of expression."

Suu Kyi does not have direct power over the Myanmarese military, but U.N. investigators say she contributed to the attacks, including by stymieing probes into the military's atrocities.

Her muted response to the horrific violence has prompted widespread criticism. In September, she admitted that the situation "could have been handled better."