Accessibility links
Definition Of The Kilogram Is About To Change A small cylinder called Le Grand K has defined the kilogram for more than a hundred years. But if a scratch ever rendered it lighter, the definition of the kilo literally shifted. Time for a change. 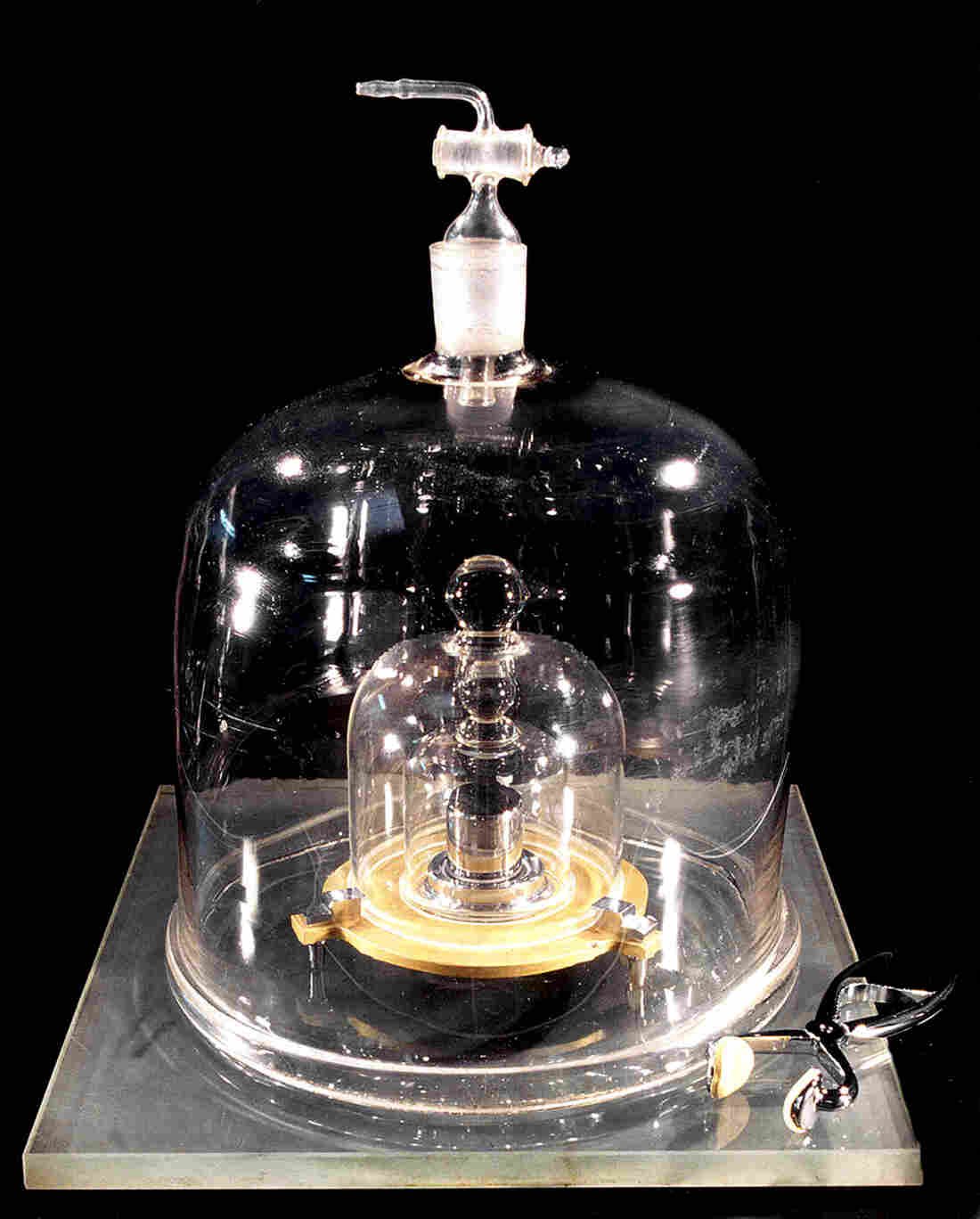 Forged in 1879 and sanctioned by the General Conference on Weights and Measures at its first meeting, Le Grand K, the international prototype of the kilogram, has been kept under lock and key in a vault outside Paris. BIPM hide caption 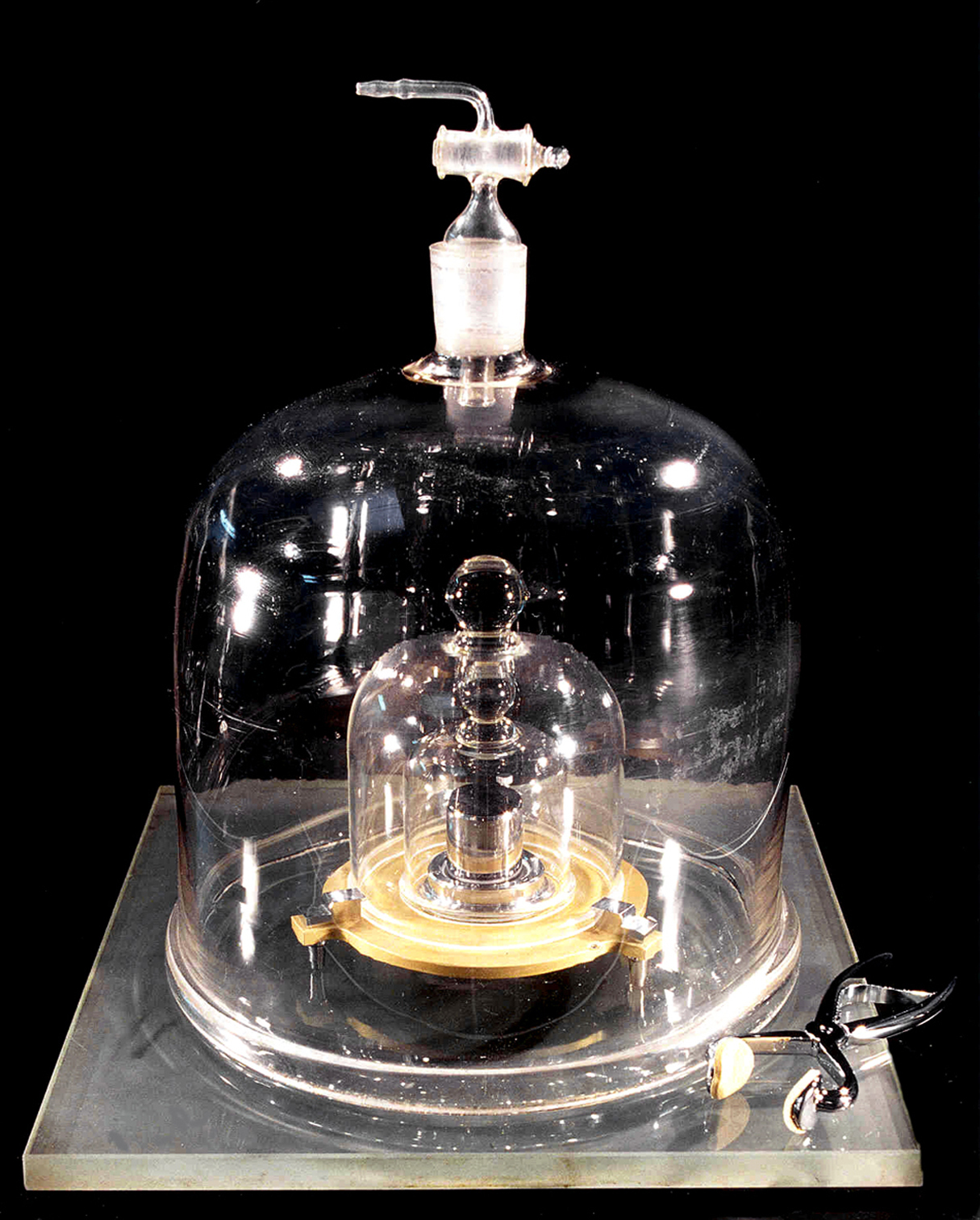 Forged in 1879 and sanctioned by the General Conference on Weights and Measures at its first meeting, Le Grand K, the international prototype of the kilogram, has been kept under lock and key in a vault outside Paris.

The vote to redefine the kilogram was, as expected, unanimous, with representatives from more than 50 countries saying "yes" or "oui" at the historic meeting in Versailles, France.

Bill Phillips, a Nobel laureate from the National Institute of Standards and Technology in Maryland, told the assembled delegates that basing the kilogram's official definition on a hunk of metal held in a vault was "a situation that is clearly intolerable."

He said in the 21st century, continuing to define the international unit of mass using an object made in the 19th century is "scandalous."

His colleagues clearly agreed, as no country voted to keep the old definition.

The world is about to say au revoir to Le Grand K, a cylinder of platinum and iridium that has long reigned over the world's system of weight measurement. 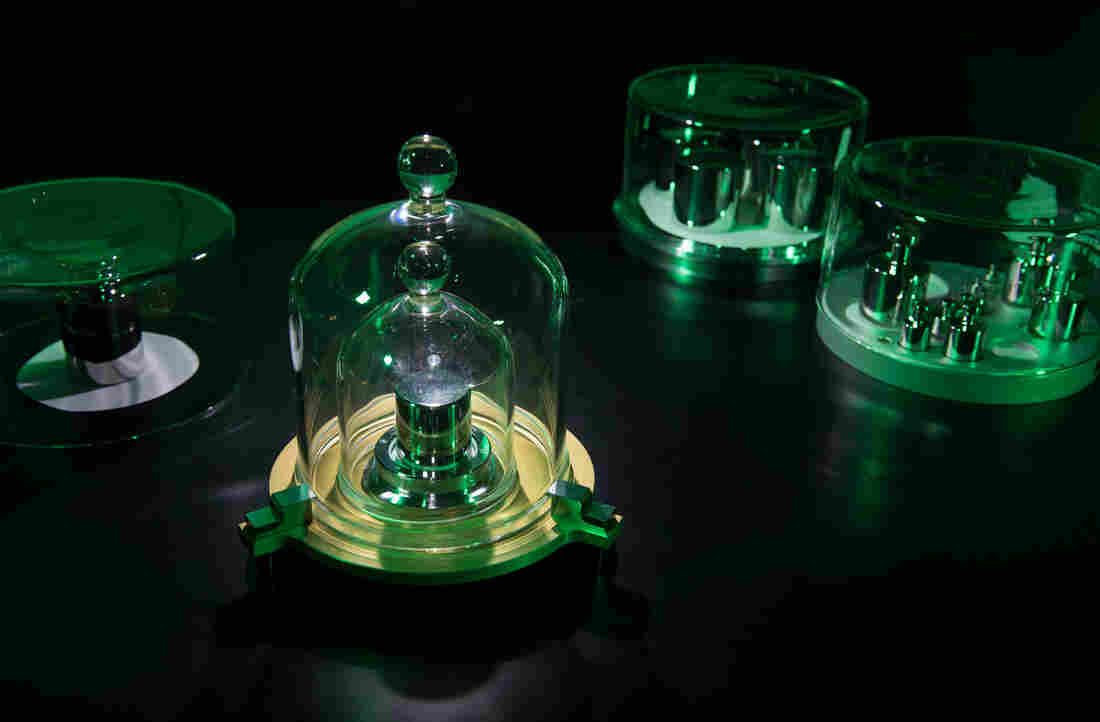 The U.S. National Institute of Standards and Technology in Maryland has its own copy of Le Grand K — a platinum-iridium kilogram known as K92. In the background are stainless-steel kilogram masses. J.L. Lee/NIST hide caption 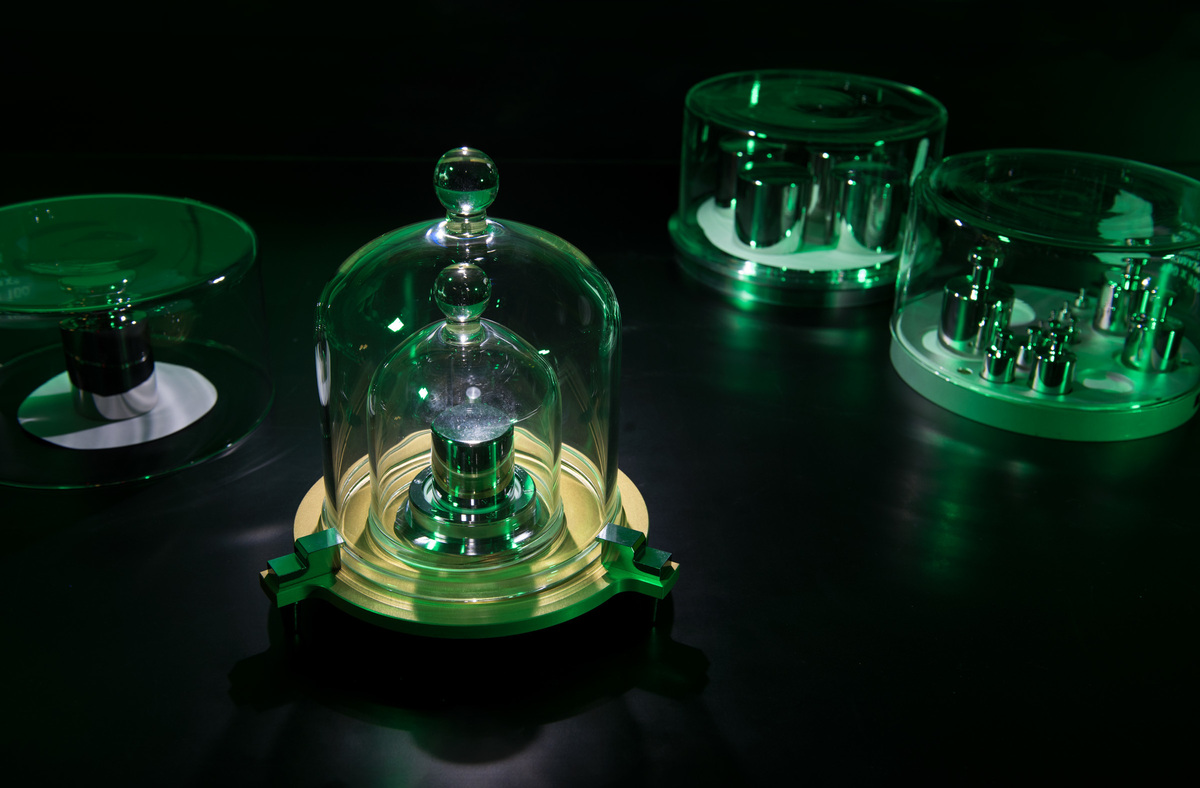 The U.S. National Institute of Standards and Technology in Maryland has its own copy of Le Grand K — a platinum-iridium kilogram known as K92. In the background are stainless-steel kilogram masses.

Le Grand K was forged in 1879 and is held in a locked vault outside Paris — revered and kept under lock and key because its mass, a little over 2 pounds, is the official definition of the kilogram.

But this is will soon change. On Friday, the international General Conference on Weights and Measures will meet in Versailles, France, to vote on whether to redefine the kilogram.

The vote is expected to be unanimous, a mere formality after years of work. Going forward, the world's system of mass measurement will not be based on some special hunk of metal, but rather on unalterable features of the universe — such as the speed of light, time and Planck's constant, a number that helps scientists figure out the energy of a photon of light, given its wavelength. (The approximate numerical value of Planck's constant is 6.626 x 10-34 joule-second.)

"It's fantastic! It's great! It's history in the making," enthuses Zeina Kubarych of the National Institute of Standards and Technology in Maryland, which specializes in the science of measurement.

"We're changing a mass realization system that we've had for 129 years," she says. "It's a huge event."

Kubarych works in a secure, climate-controlled lab at NIST that holds a pair of squat metal cylinders, each under — not one but two — old-fashioned, glass bell jars. The United States got these official duplicates of Le Grand K after signing the Treaty of the Meter in 1875.

"These are our national standard kilograms," explains Kubarych. "That's what we use as the basis of our mass dissemination system in the United States."

These antique artifacts are very important for anyone who needs to do comparisons to make sure their precise measurements aren't out of whack. That includes state measurement labs that test and certify the scales used in stores and pharmaceutical companies, for example, as well the scales used by airplane manufacturers and makers of scientific instruments.

"It pretty much spans most of the sectors of the U.S. industry," says Kubarych.

The nation's official kilograms are so precious that "we don't touch them," says Kubarych.

"We don't even try to touch them with gloved hands."

Instead, the metal artifacts are carefully picked up with a special tool wrapped in filter paper — to avoid leaving any tiny scratches or fingerprints that could throw off the weight.

And that is the big problem with basing a measurement system on the comparison of pieces of metal. If Le Grand K gets heavier or lighter — or absorbs atoms of something from the air — the definition of the kilogram literally changes.

Scientists believe something like this has been happening, because Le Grand K seems to now weigh slightly less than its official copies.

Maybe some teeny fluctuation wouldn't matter to the average person buying, say, coffee by weight at the supermarket. But scientists despair at the idea of trying to understand reality using measurements that are constantly shifting.

Redefining the kilogram means that scientists will "finish something that was begun probably before the French Revolution," notes Stephan Schlamminger of NIST.

Back in those revolutionary times, Enlightenment thinkers hated the world's hodgepodge of measurement systems — each one based on some random object, such as the length of a local duke's foot. Their radical vision was to create something rational and universal, says Schlamminger, noting that the metric system was supposed to be "for all times; for all people."

These originators of the metric system based it on the globe itself, with the meter described as one 10-millionth of the distance from the North Pole to the equator.

But, for a long time, the meter was literally a metal bar in France.

As physics advanced, says Schlamminger, scientists were able to ditch the metal bar and define the meter in terms of the distance that light can travel through a vacuum in about one 300-millionth of a second.

"And this," Schlamminger says, "is the idea of going from an artifact to a fundamental constant."

In the future, to see whether a hunk of metal really weighs 1 kilogram, it won't have to get flown to France and compared with Le Grand K. It can be evaluated in this type of instrument, using Planck's constant.

Schlamminger and two of his colleagues are so devoted to redefining the kilogram that they recently got tattoos depicting the numbers of Planck's constant.

NIST's Jon Pratt, one of the tattooed researchers, says that precisely measuring Planck's constant was hard, as was persuading the world to switch to a new kilogram based on it.

"There were plenty of committees and fisticuffs and hemming and hawing on this," Pratt says. "So we knew what we were in for. We knew that it was going to be painful. And we all agreed that we'd get inked with the number when we got it done."

If the vote goes as expected, the new definition of the kilogram will go into effect in May.

Meanwhile, Le Grand K will remain in its lonely vault.

"It is an historic artifact that has been under study for 140 years and will retain a bit of metrological interest," says its caretaker, the Bureau International des Poids et Mesures, "even though its mass will no longer define the kilogram."