Accessibility links
Latinos Increasingly Concerned About Their Place In U.S. Society, Survey Finds A majority of Hispanics say they are dissatisfied with the way things are going in the country, according to a new survey by the Pew Research Center.

Editor's note: This article and some of the attached videos contain language that some people may find offensive.

One out of every two Latinos in the United States says that life has become more difficult for them in the past year, according to a recent survey by the Pew Research Center, a nonpartisan think tank in Washington, D.C.

Mark Lopez, director of global migration and demography research at Pew and a co-writer of the survey, says the findings reflect a turn "towards being pessimistic about the country, about the direction of the country and also the future for their own children."

Lopez says Latinos have traditionally been more optimistic than the general U.S. population about life in the United States. "But that's changed," he says.

Nearly 4 in 10 Latinos say they experienced some kind of harassment related to their ethnicity in the past year. 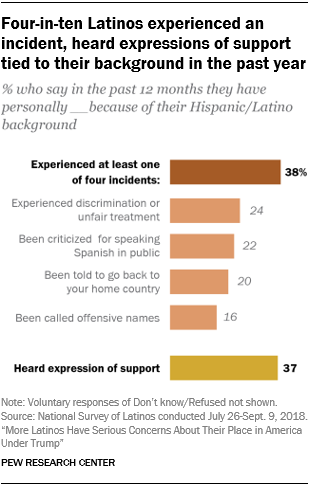 Yet a similar number say they have also heard expressions of support for Latinos.

The experience of 38-year-old Janet Sadriu illustrates both of these findings.

Sadriu was driving on a two-lane, 35 mile-an-hour city street in Houston recently when a driver passed her on the right, pulled next to her and started yelling obscenities at her at a red traffic light. She pulled out her phone and started recording him.

Houston resident Janet Sadriu recorded this video when a driver started yelling obscenities at her at a red traffic light.

"That's not how we drive in America," the man shouts. "Trump's deporting your illegal cousins today, b****!" he screamed at her.

"I don't know him," says Sadriu, "but he automatically assumed I'm Hispanic. I have black hair, I'm not blue-eyed and white."

"Learn English," he rants in the video. "It's my country. Get out."

Sadriu was born in Mexico. She's a U.S. citizen and has lived in the United States since 2009.

"I was shocked and shaken," she says. "I was afraid that this man was going to follow me and pull out a gun."

Sadriu, whose 2-year-old daughter was in the car with her, filed a police report.

Janet Sadriu was driving on a city street in Houston recently when a driver passed her on the right, pulled next to her and started yelling obscenities. Courtesy of Janet Sadriu hide caption

Janet Sadriu was driving on a city street in Houston recently when a driver passed her on the right, pulled next to her and started yelling obscenities.

Sadriu says she was angry when she posted her video on social media. "I was thinking of other immigrants who are out of status," she explained, "and who are afraid to speak up or ashamed and would not expose this man's ugly behavior." But she's also hoping for change, so that "by the time my daughter is older, she is going to live in a world where all the racism and hate and bullying is gone."

She says the response has been overwhelmingly kind and supportive. "People from all over don't agree with this type of behavior," she says.

According to the Pew survey, 38 percent of Latino respondents experienced similar incidents in the past year. Some said they were asked not to speak Spanish in public or were told to go back to their country.

Nearly two-thirds of Latino respondents say that Trump administration's policies have been harmful to their communities. The survey found many Latinos are more worried about deportation and family separation. They are also more concerned about their personal finances than in past years, even though the country's economy is doing well and Latino unemployment is at historic lows, according to Pew.

Other recent examples of harassment include an incident in May, when a lawyer in Manhattan threatened to call ICE agents on the kitchen staff making his lunch.

At Andy's Restaurant in Lovettsville, Va., in October, a Guatemalan family was accosted by a white woman finger-wagging at them for speaking Spanish. In the video, the woman is heard demanding, "show me your passports," followed by, "go back to your f****** country."

A response to the belligerent woman was posted on Andy's Facebook page by the restaurant owners. "Thank you for thinking that you have a right to express your venomous and vitriolic views — no matter how odious and ignorant — wherever and whenever you desire," they posted. "Thank you —and we mean this with all the aforementioned respect that you rightfully deserve — for never returning to Andy's. You are not welcome."

Janet Sadriu, the Houston mom who experienced verbal harassment while driving "just for my looks," has a message for Hispanics who encounter such harassment. She urges them "not to be afraid and speak up." There are more good than bad people out there, she says.