Accessibility links
A Third Rail No More: Incoming House Democrats Embrace Gun Control Dozens of Democratic candidates who ran in competitive suburban House districts this election year bluntly called out the need for more gun control. And many of them won. 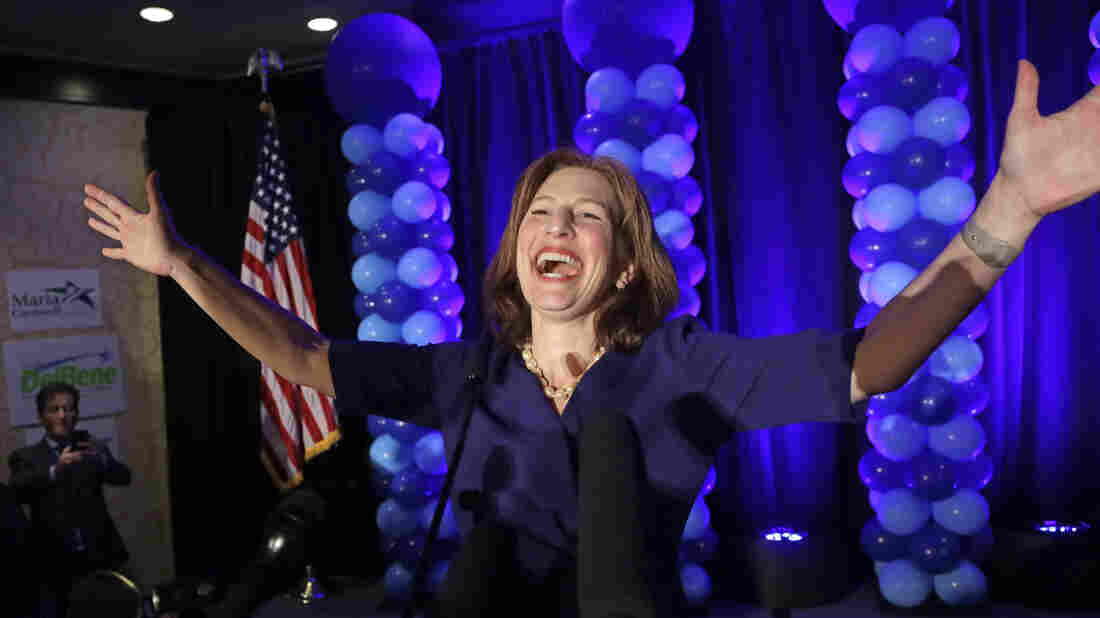 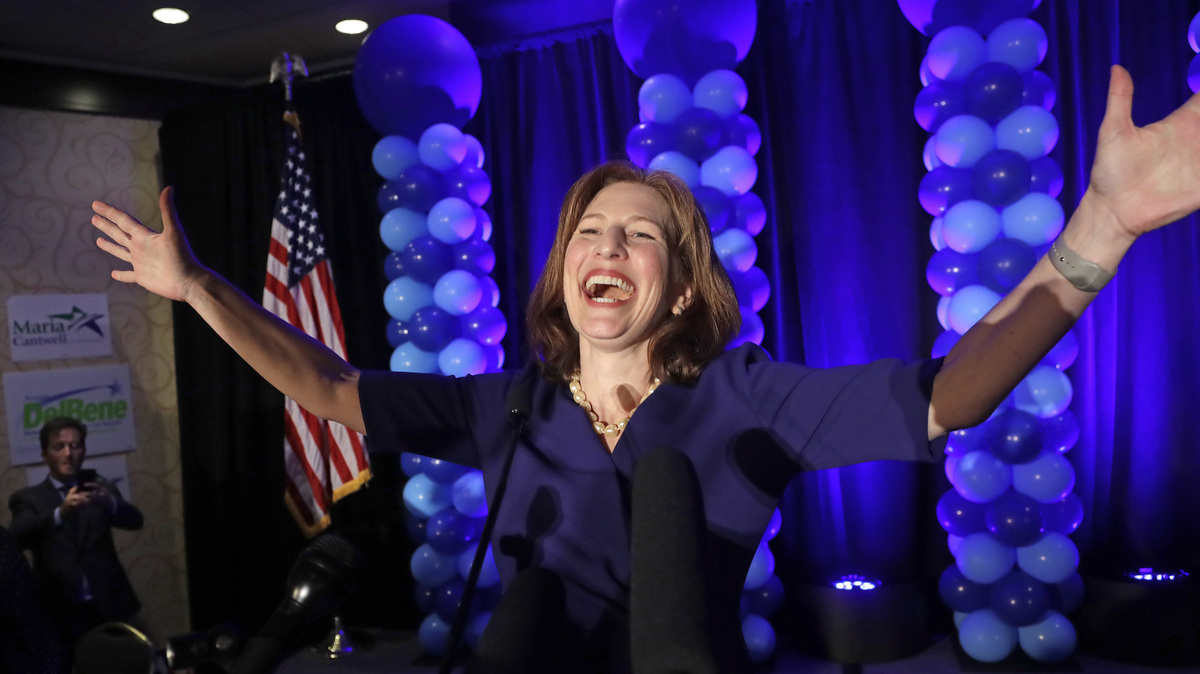 Kim Schrier is one of a number of Democratic House candidates who backed stronger gun regulations and flipped Republican-controlled seats in last week's midterm elections.

The deadly mass shooting at a bar in Thousand Oaks, Calif., last week came less than a day after dozens of Democrats who campaigned on promises to strengthen gun laws were elected to the House of Representatives. Across the country, candidates from Virginia, Georgia, Texas and Washington state bluntly called for more gun safety, seemingly emboldened to take on the National Rifle Association.

In total, 95 candidates endorsed by Giffords PAC won seats in the House. Giffords PAC is the gun-violence prevention group founded by former Arizona Congresswoman Gabrielle Giffords and her husband. Giffords was shot in the head in a 2011 attack that left six people dead.

Both groups insist that in contests in which they took on incumbents supported by the NRA, they were more successful than the powerful gun lobby.

In an emailed statement, the NRA said, "Gun control was not a decisive factor on election day," disputed the notion of a "blue wave" and pointed to key Senate wins in Tennessee, Indiana and Missouri, where NRA-backed candidates defeated Democratic incumbents.

The Politics Of Bump Stocks, 1 Year After Las Vegas Shooting

After recent mass shootings, GOP congressional leaders have come under criticism for offering their thoughts and prayers, but little legislative action. The next Congress may be very different.

Responding to the shooting that left 12 dead in her home state of California, House Democratic Leader Nancy Pelosi says there is "bipartisan legislation to have common sense background checks" pic.twitter.com/3w9xlPvHcE

Last week, after the shooting in California, the likely incoming speaker, Nancy Pelosi, told CNN that she wants action on "common-sense background checks to prevent guns going into the wrong hands."

"This will be a priority for us in the next Congress," she added.

After last week's elections, there is now a committed group of Democrats in the new House who will likely push for new gun restrictions. Still, such bills are highly unlikely to pass a Republican-controlled Senate or be signed into law by President Trump.

"The House is now going to be the seat of power for Democrats at the federal level, so it's really going to drive the agenda for what the Democratic Party stands for going into the primary in 2020," said Lanae Erickson, vice president for social policy and politics at the center-left think tank Third Way.

While any gun-related legislation the Democrats might pass may never make it into law, Erickson says, House Democrats can show voters what their party would do if it gains more power.

But Democratic unity around gun reform is a somewhat new idea. In the past couple of years, guns have become a litmus test for Democrats, in much the same way as abortion or gay marriage are. This cycle, the NRA supported just three Democratic House campaigns. Just a decade ago, far more Democrats sought out the group's approval.

"I remember in 2006 and 2008, when Democrats recruited so-called NRA Democrats to rebuild their majority in Congress, and the manifestation of that strategy was inaction," said Peter Ambler, the executive director of the Giffords gun-control organization and a veteran House staffer.

"Candidates have been so afraid in the past, they've thought that supporting gun safety was only a negative in terms of the politics," said Erickson with Third Way.

But in 2018, perhaps because of the the political activity around the Parkland, Fla., school shootings, many candidates campaigned openly on promises to strengthen gun laws.

"This issue used to be considered the third rail of American politics, but no longer," said John Feinblatt, president of Everytown for Gun Safety.

Undoubtedly, some Democrats still don't emphasize their stance on gun control, but the overall Democratic recalibration on gun policy wasn't limited to the stereotypical cities on the coasts.

"The contrast between me and my opponent was very stark," said Crow. "He had a lifetime A rating by the NRA."

Crow, who points out that he's a gun owner who served as an Army Ranger and grew up hunting, ran a vocal campaign calling for gun reform. He felt that voters in his district in particular were tired of congressional inaction.

"Our community has been has been disproportionately impacted by gun violence over the years, from the Aurora theater shooting to Columbine," said Crow. "And we're going to do something about this."

Crow has specifically called for universal background checks and a repeal of the of the Dickey Amendment, a 1996 provision that restricts federal funding for research on gun violence.

"It is way past time for the [Centers for Disease Control and Prevention] to have the funding that they need to study this as the public health crisis that it is," he said.

Crow is not the only new voice in Congress calling for that change. Democrat Kim Schrier, a doctor who won a traditionally Republican seat in Washington state, said she also would seek to repeal the Dickey Amendment.

"It's different to come at this as a pediatrician and not a career politician," said Schrier, who ran an ad during her campaign talking about the risks of having a gun in the house around depressed boys. "My goal here is to keep our children and our communities safe, and I don't think there is anything radical about that."

My newest TV ad highlights how desperately we need to take action to stop our epidemic of gun violence.

This Congress is gutless when it comes to taking even the simplest steps to reduce gun violence. I’ll stand up to the NRA to keep us safe. Watch and RT my newest ad: pic.twitter.com/b95RnHwjuI

Schrier says health care was undoubtedly the most consistent policy concern she heard from voters on the campaign trail this year, and that's consistent with most polling. But she said she also heard a lot about gun safety, particularly from women and mothers.

"Women had a big say in the election, and I think the issue of gun safety resonates there," said Schrier. "I know it does."

The gun conversation used to feel incredibly "asymmetric," according to Erickson at Third Way, but she says last week's results suggest that's changing.

"Even though it isn't the No. 1 or No. 2 overall concern for most voters, there's a very committed activist base now that is at the Democratic Party's political table, pushing that this be one of the top things on its agenda," she said.

Erickson says part of that change is because of the changing coalition within the Democratic Party, as Democrats see their chances diminish in rural areas and potentially grow in the suburbs.

"Suburban women have always been supportive of gun safety, and now they make up a bigger piece of the coalition," said Erickson. "And that really transforms the policy of guns for the Democratic Party."