Accessibility links
In 'Let's Go,' Wilco Frontman Jeff Tweedy Details His Struggles And Joys The singer-songwriter tells the story of how a kid from a Midwestern, working-class family became an idol to country-punk and alternative rock fans — and the obstacles and celebrations along the way. 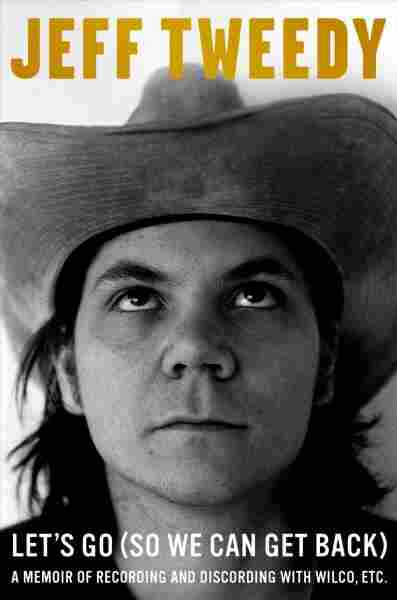 A Memoir of Recording and Discording With Wilco, Etc.

Title
Let's Go (So We Can Get Back)
Subtitle
A Memoir of Recording and Discording With Wilco, Etc.
Author
Jeff Tweedy

"I just can't find the time to write my mind the way I want it to read," sang Jeff Tweedy in "Box Full of Letters," the very first single from Wilco, the alternative-rock band he's fronted since 1994.

And it's true that the singer-songwriter has kept himself busy over the last 24 years, recording 10 albums with Wilco (as well as several collaborations) and one with Tweedy, the band he started with his son Spencer.

Tweedy has been one of the most influential American musicians of the past few decades. And in his new, wildly entertaining memoir, Let's Go (So We Can Get Back), he tells the story of how a kid from a working-class family in Belleville, Ill., became an idol to fans of country-punk and alternative rock.

Tweedy traces his life from his childhood in Belleville, a town he describes as "depressing and depressed in all of the familiar ways common to dying Midwestern manufacturing hubs." He took to music early, listening in his family's attic to the Replacements and Minutemen, discovering "a secret self. A better self than the one I was stuck with."

It was in high school where Tweedy made a friend who would change his life. He and his classmate Jay Farrar bonded over their shared love of punk, and soon formed the band that would come to be known as Uncle Tupelo. The group released just four albums before breaking up acrimoniously; their record No Depression would lend its name to an alternative-country fanzine, and later, to the genre itself.

Tweedy is honest about his relationship with the famously reticent Farrar (who now leads the band Son Volt). "We had good times," he writes. "Lots of them." While he doesn't hide his disappointment over Uncle Tupelo's breakup — he still seems confused about why it happened — he writes about Farrar with a real tenderness, writing about how elated he was when Farrar told a friend that "Jeff knows how to write songs." ("For Jay, that was as close as you were ever going to get to 'I love you.'")

After Farrar left Uncle Tupelo, Tweedy and his remaining bandmates formed Wilco, whose sophomore album Being There gained critical acclaim. The band had its share of difficulties, particularly in 2001 when Tweedy fired Jay Bennett, a multi-instrumentalist, from the band. Tweedy suggests that he and Bennett were enabling each other's addiction to painkillers, writing, "I fired Bennett from Wilco because I knew if I didn't, I would probably die."

Unsurprisingly, Tweedy writes at length about his struggle with substance use disorder, and he does so with an affecting mix of humor and brutal honesty. "If you picked this book up looking for wild, druggy stories about my addiction to opiates, you're out of luck. I want to put those years behind me," Tweedy writes in the introduction. And then, a few sentences later: "The last part was a joke. Jesus, of course I'm going to write about the drugs."

It's undoubtedly a difficult subject to write about, but Tweedy refuses to let himself off the hook — with breathtaking candor, he writes about how his opioid addiction led him to making horrifying decisions, including stealing morphine from his mother-in-law when she was dying of lung cancer. "I barely remember that, and I wish I didn't remember it at all," he writes.

Let's Go (So We Can Get Back) is an intensely charming book, leavened by Tweedy's dry, sometimes goofy, sense of humor. He describes his early singing style as "like the kind of pubescent warble one might hear squeaking through an Appalachian fast-food drive-through speaker" and describes himself as " a doom-dabbling, fifty-year-old, borderline misanthrope [and] nap enthusiast." He writes with a kind of entre-nous intimacy, addressing the reader directly at several points, which makes the book even harder to put down.

But it's Tweedy's earnestness and bravery — he writes not only about his addiction, but also about his experience being sexually assaulted by an adult woman when he was 14 — that makes his memoir so unforgettable. He refuses to valorize the pain he's experienced, writing, "I think that artists create in spite of suffering, not because of suffering. ... To exalt an artist's suffering as being somehow unique or noble makes me cringe."

Tweedy's music has never shied away from darkness, but he's also never been afraid to celebrate joy. The same is true with this remarkable memoir — it's a wonderful book, alternately sorrowful and triumphant, and it's a gift not just to his fans, but to anyone who cares about American rock music.