Accessibility links
Migrant Caravan Developments: LGBT Splinter Group The 1st To Arrive In Tijuana About 80 mostly LGBT migrants reached the border city south of San Diego on Sunday. They plan to seek political asylum as early as Thursday, arriving weeks ahead of thousands en route to the U.S. 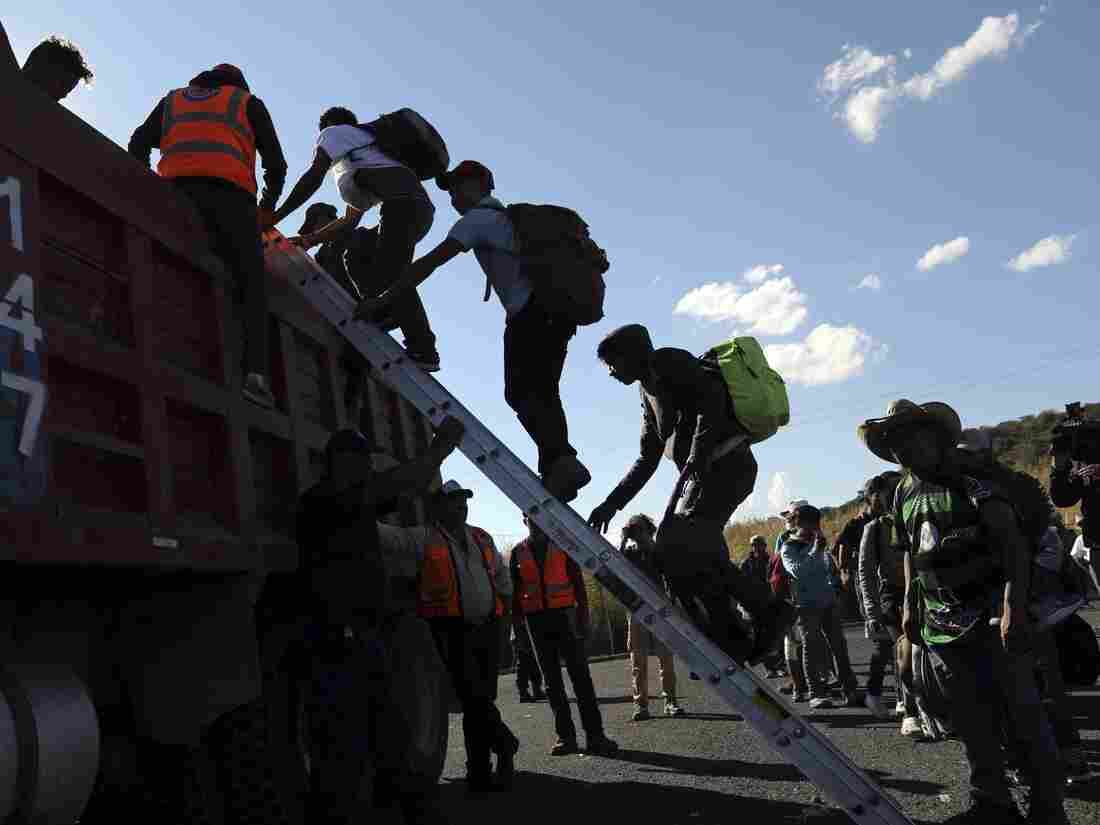 A group of mostly LGBT Central American migrants are the first to reach northern Mexico. On Sunday about 80 of them arrived in Tijuana. They plan to apply for asylum as early as Thursday. Rodrigo Abd/AP hide caption 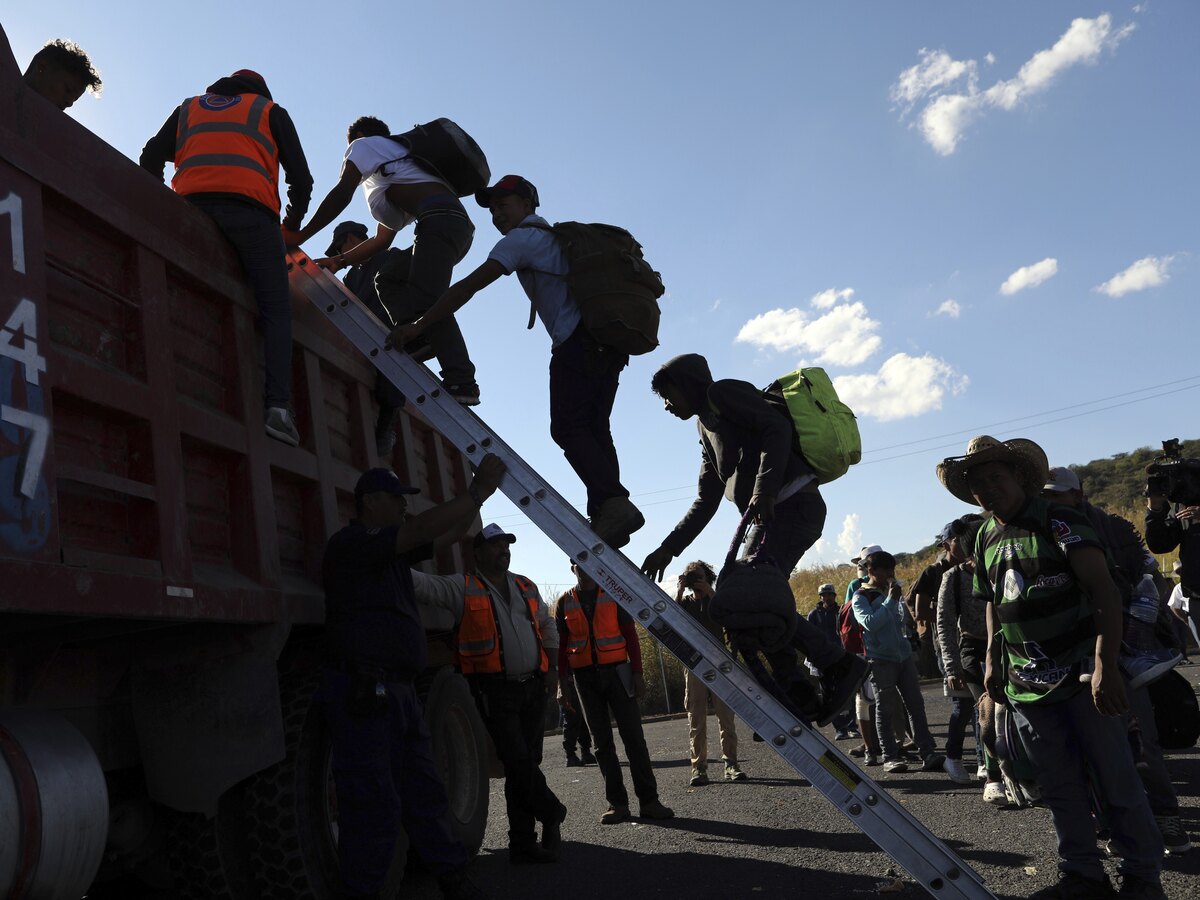 A group of mostly LGBT Central American migrants are the first to reach northern Mexico. On Sunday about 80 of them arrived in Tijuana. They plan to apply for asylum as early as Thursday.

A group of LGBT migrants who were part of the massive caravan slowly marching toward the U.S. made it to the coastal border city of Tijuana on Sunday. They are the first of more than 3,600 Central Americans to reach the northern border of Mexico.

About 80 migrants, the majority of whom identify as LGBT, splintered off from the larger group in Mexico City after weeks of what they say was discriminatory treatment by local residents and other travelers, Honduran migrant Cesar Mejia told reporters at a news conference on Sunday.

"Whenever we arrived at a stopping point the LGBT community was the last to be taken into account in every way. So our goal was to change that and say, 'This time we are going to be first,' " Mejia said.

Members of the group in Tijuana include Hondurans, Guatemalans, Nicaraguans and Salvadorans, including a handful of children. They are weeks ahead of the thousands who are on foot; the largest group of migrants is in Guadalajara, Mexico — nearly 1,400 miles south of Tijuana.

Most plan to use their status as members of a persecuted class to request asylum in the U.S. as early as Thursday.

"We are fleeing a country where there's a lot of crime against us," an unidentified transgender woman, told reporters.

The LGBT migrants gravitated toward one another within the caravan and began organizing en route. An internal count revealed there were more than 120 LGBT people among them, Voice of San Diego reported. Their number emboldened the collective to forge their own path northward, which they did after linking up with an assortment of U.S. and Mexico-based LGBT groups that paid for the asylum-seekers to travel by bus, Univision said.

"When we entered Mexican territory, those organizations began to help us. We did not contact them; they learned from our group thanks to the media and decided to help us," Mejia said.

On Sunday, the group arrived at an upscale neighborhood called Coronado in Playas de Tijuana just a few miles from the San Diego port of entry. They were dropped off in the tony enclave in small groups by Mexican immigration officials who had been alerted of the migrants' arrival in nearby Mexicali. But upon their arrival they were met with anger from local residents who said they should have been warned by local authorities that LGBT people would be renting the four-bedroom house.

"This is a peaceful neighborhood and we don't want any trouble," Jose Roberto Martinez told Mejia. He said he lived in the neighborhood and that families in the area had survived terrible violence that plagued the region in the early 2000s — a result of the vicious drug wars in Tijuana.

"We aren't safe here," a woman who lives in the neighborhood said. "There could be someone within your group that could hurt us."

Another woman demanded to know how the group had come up with the money to pay the rental fee for the expensive house. Mejia assured the community they were not backed by narcotraffickers.

Mejia spoke with reporters about the arduous journey that began on Oct. 12, recounting instances in which many LGBT migrants were denied food and access to showers by other members of the caravan or local groups providing aid.

Erick Dubon told Telemundo 20 that he was forced into prostitution in Honduras. With no options for any other type of work, he said, he had to choose between becoming a thief or sleeping with men for money. He chose the latter and that made him vulnerable to attacks. Telemundo reported Dubon's body is covered in scars from a violent assault.

Nehemias de Leon shared similar stories about living in Guatemala. He said the trip north was difficult and frightening, and that the chances of obtaining asylum are slim in light of the Trump administration's rhetoric regarding the caravan and immigrants in general. But Leon said he'll never go back. "It would be a death sentence," he said.

Among the few possessions Leon has carried with him along the 2,400 mile journey are documents he said are proof of the danger he faces living as a gay man in his country of origin.

"We want to do things in order, in the right way," Mejia told reporters. He said the LGBT group plans to request asylum at the San Ysidro or Otay Mesa ports of entry. "We are waiting for our representatives," he added.

César Palencia, the head of migrant services for Tijuana's municipal government, told Univision there are more than 2,000 people already waiting for an interview with U.S. Customs and Border Protection officials. He anticipates anyone who applies now will have to wait until the end of the year for an interview.