Accessibility links
Houston Got Hammered By Hurricane Harvey — And Its Buildings Are Partly To Blame The city itself — skyscrapers, homes and factories — snagged the moist air of Hurricane Harvey and caused more rain to fall. Two new studies detail how humans are making hurricane flooding worse. 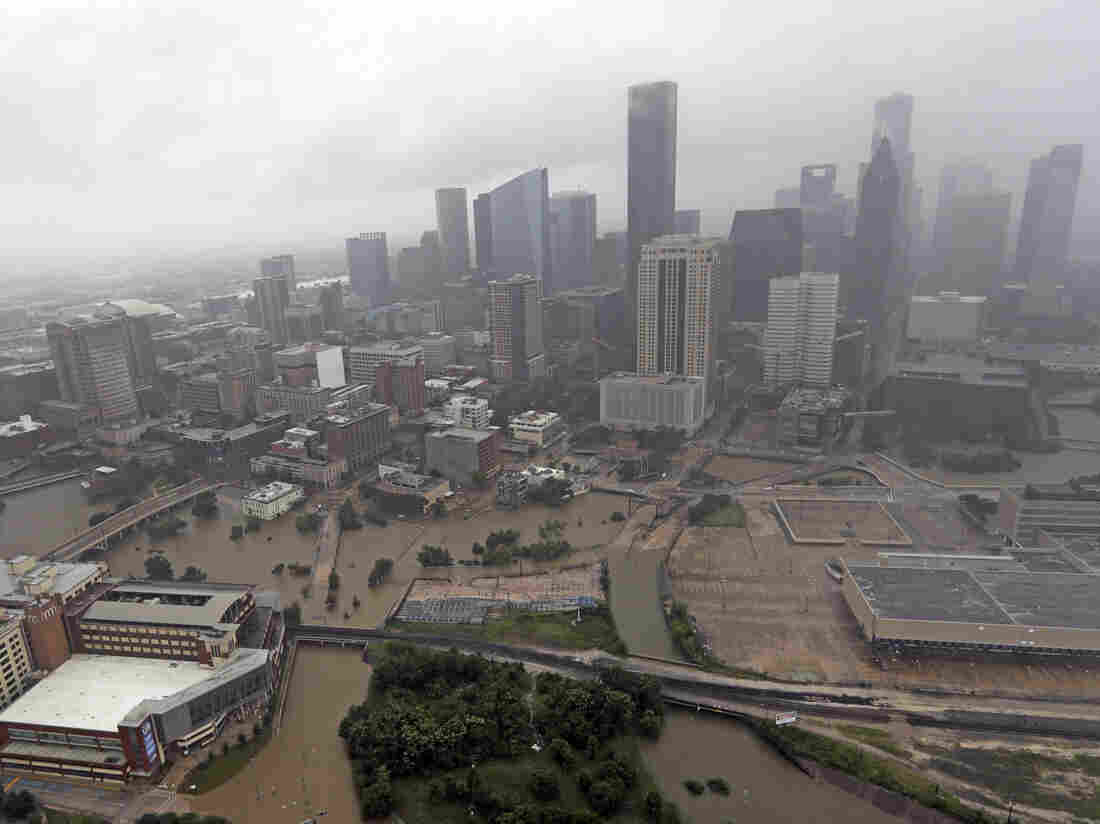 Downtown Houston flooded by rain from Hurricane Harvey on Aug. 29, 2017. The buildings in the region exacerbated rainfall from the storm, according to a new study. David J. Phillip/AP hide caption 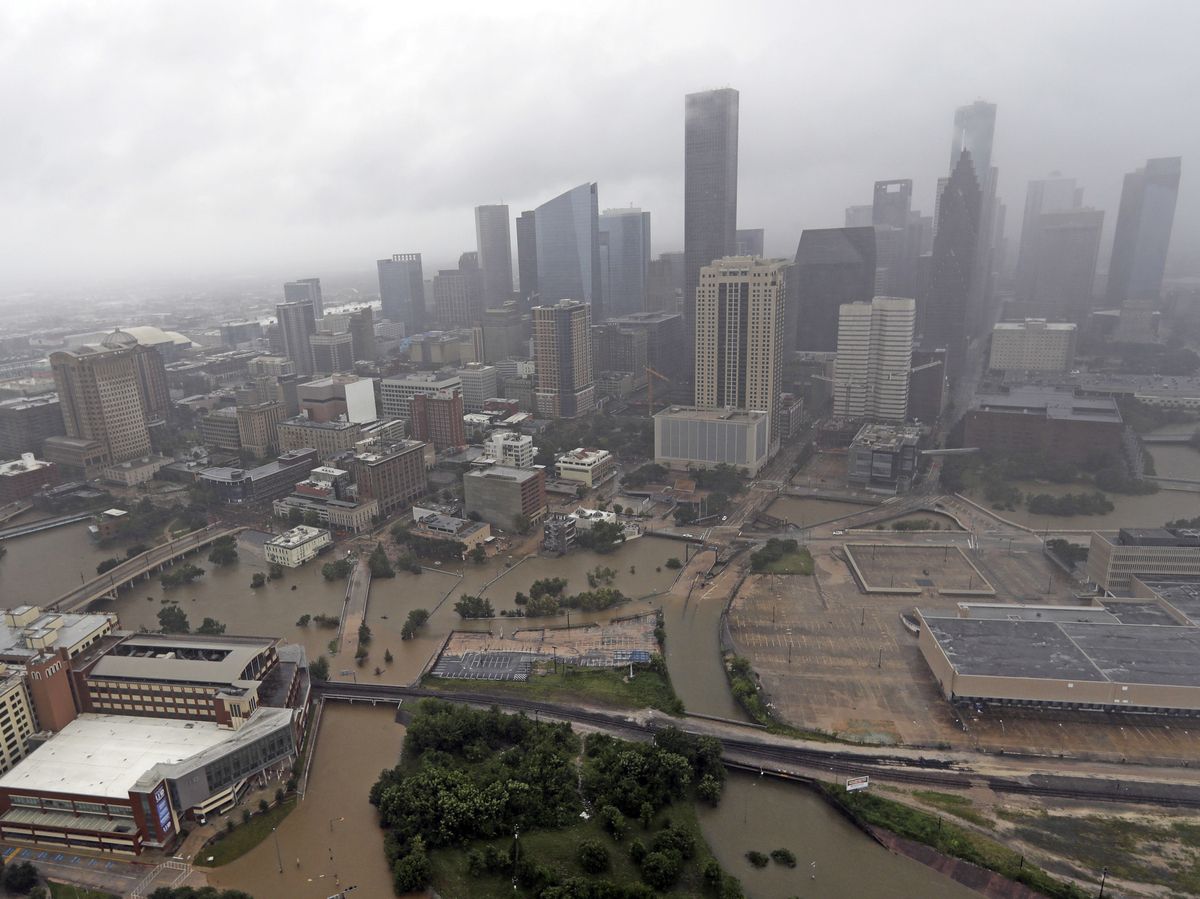 Downtown Houston flooded by rain from Hurricane Harvey on Aug. 29, 2017. The buildings in the region exacerbated rainfall from the storm, according to a new study.

Hurricanes are dropping more rain and causing more flooding than in the past, and humans are to blame on multiple fronts.

Climate scientists have warned for decades that global warming will cause extreme weather to get more frequent and severe. A pair of studies published today in the journal Nature find that hurricanes are already causing more rain than they used to, and that cities themselves may be making the rainfall from those storms even worse.

The second finding is particularly novel. Scientists looked at data from the city of Houston during Hurricane Harvey in 2017, and compared the rain that fell to a model of how much rain would have fallen if the city and its surrounding area had never been built.

"What we found was that the city enhanced the overall rainfall footprint [compared] to what we would have expected if we replaced the urban areas with cropland," explains study co-author Gabriele Villarini of the University of Iowa. Significantly more rain fell on the Houston area than would have fallen on the coastal grasslands that used to be there.

One way to imagine the role of the city's buildings in generating that rain is to first imagine Hurricane Harvey as a moist, hot wind blowing from the Gulf of Mexico inland across Texas.

"The buildings stop the air from being able to move forward, away from the ocean," explains study co-author Gabriel Vecchi of Princeton. "They sort of stop the air in that general area, and the air has nowhere to go but around the buildings, or up."

When the moist, hot air goes up into the colder atmosphere, the moisture tends to condense into droplets, the way water condenses on a cool glass. Those droplets fall as rain.

"The more air that you raise up, in general, the more rain you will have, and that is one of the impacts of these buildings," Vecchi says.

The study didn't look at which types of buildings — the homes, factories, skyscrapers and businesses that make up Houston — contribute the most to rainfall. But Vecchi and his team did analyze how the sprawling development and paving in and around Houston exacerbated flooding. Because paved areas are impervious to water, the rain that fell during Harvey had nowhere to soak in and quickly flooded the area.

Together, the paving and buildings made catastrophic flooding much more likely to happen during Hurricane Harvey.

And while this study didn't examine whether similar dynamics would play out in other coastal cities during hurricanes, previous work by other scientists has found that cities do generally affect rainfall.

"Clearly we need to study the mechanisms more, but it is good to see this being validated," says Purdue climate scientist Dev Niyogi, who has spent years studying the complex relationships between cities, storms and rainfall.

He says local governments in hurricane-prone areas can start to examine how development decisions affect disasters. "Can we design cities that can affect help future hurricane impacts?" Niyogi says.

"As we think of a future where we are going to have growing rates of urbanization, we may want to understand which structures — and which ways of arranging our structures — lend themselves more to creating this enhanced rain, and which ones are perhaps less conducive to extreme rain," Vecchi says.

"I think one of the values of their study is that this can provide information as urban development continues, and give an idea of things to consider to alleviate the impacts from [hurricanes]," says Christina Patricola, an atmospheric scientist at Lawrence Berkeley National Laboratory who was not involved in the Houston study.

Patricola is one of the authors of another study, also published today in Nature, confirming that climate change is already causing hurricanes to dump more rain — hurricanes such as Katrina, Maria and Irma. "We're finding that the total storm rainfall has increased by about 5 to 10 percent" compared with the rain that would have fallen without climate change, she says.

A study published earlier this year found that Hurricane Harvey's rainfall was driven in part by warm water in the Gulf of Mexico.

Patricola and her colleague Michael Wehner also looked into the future. They studied 15 hurricanes from around the globe and modeled their rainfall and wind speeds under pre-industrial conditions, current climate conditions and multiple future warming scenarios.

They found that if humans continue to generate greenhouse gases and the Earth continues to warm, hurricanes will only get more severe. "In general, as the ocean warms, we can expect that the wind speeds of tropical storms may increase," Patricola says.