Accessibility links
Rep. Kevin McCarthy Elected House GOP Leader For Next Congress With Democrats winning control of the House in the midterm elections, GOP representatives and party freshmen elected leaders to run a smaller, more conservative conference in the next Congress. 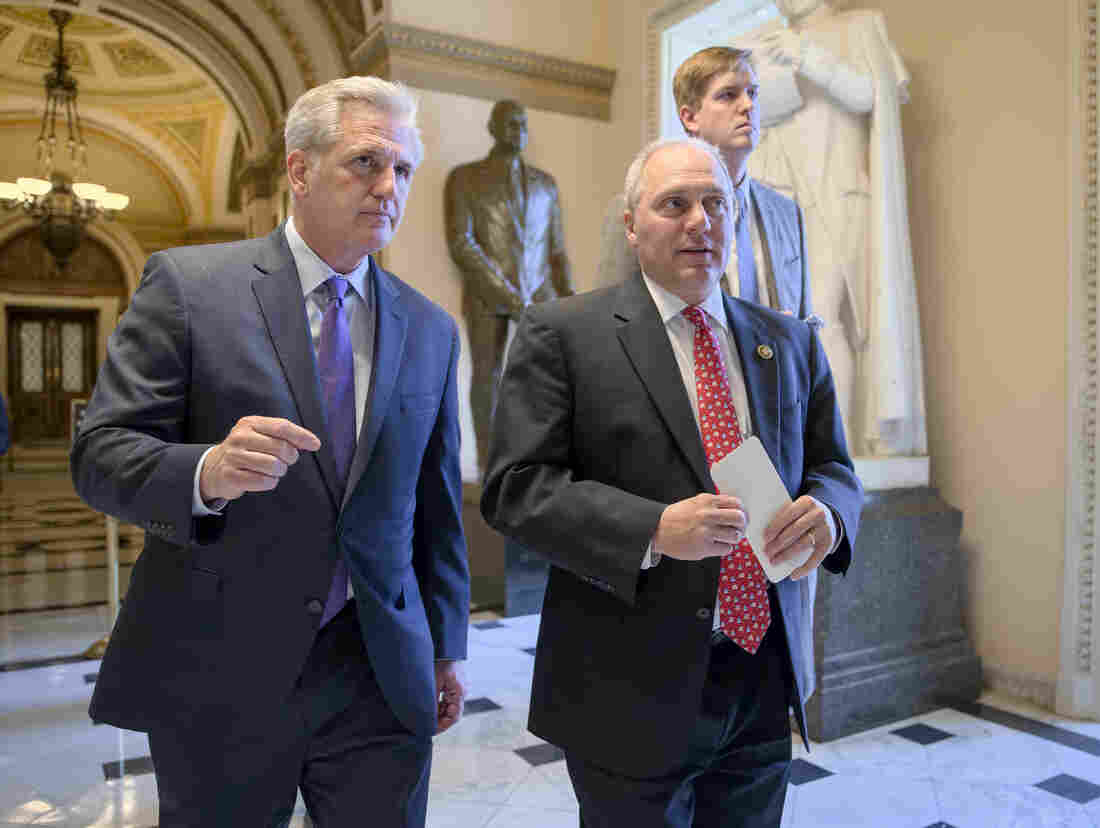 House Majority Leader Kevin McCarthy of California (left) and House Majority Whip Steve Scalise of Louisiana were both re-elected to leadership positions for the next Congress, but this time, they'll be in the minority. J. Scott Applewhite/AP hide caption 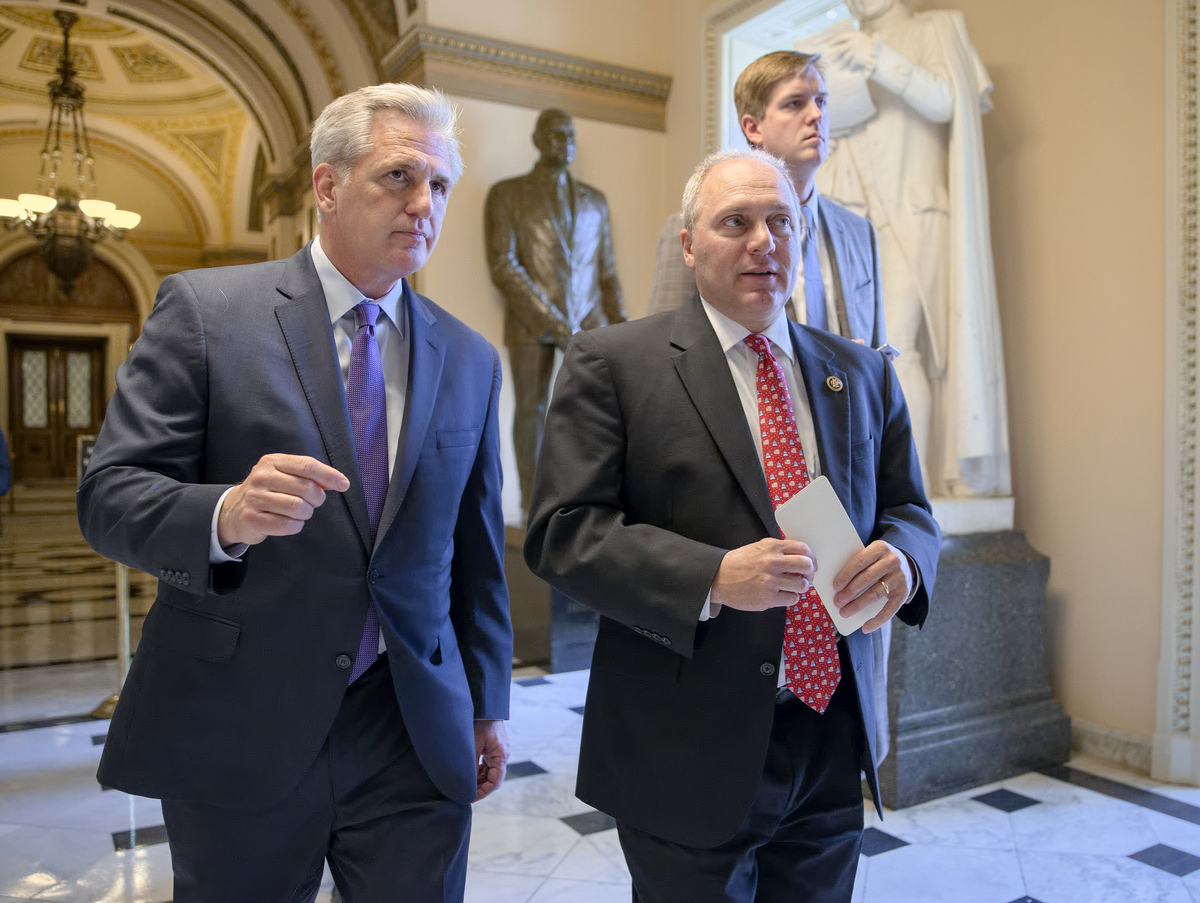 House Majority Leader Kevin McCarthy of California (left) and House Majority Whip Steve Scalise of Louisiana were both re-elected to leadership positions for the next Congress, but this time, they'll be in the minority.

House Republicans elected top leaders Wednesday to oversee their transformation from an ideologically diverse majority power to an increasingly conservative minority in the next session of Congress.

Much of the tension in the fight over who would replace retiring House Speaker Paul Ryan, R-Wis., deflated after Republicans lost more than 30 seats in the midterm elections last week, flipping control of the chamber to the Democrats in January. Only two of the current GOP leaders ran for top slots in the minority next year, and only one of those jobs was contested.

House Majority Leader Kevin McCarthy, R-Calif., easily fended off a challenge from Ohio conservative Jim Jordan in a vote of 159-43, despite the party's heavy losses in the midterms. McCarthy positioned himself as the best choice for Republicans as Democrats try to dismantle their legislative achievements and investigate President Trump.

"I think we stick to our principles, stick to our goals and you'll see this party continue to grow," McCarthy said in his pitch to members. "Watch out for us in two years. We'll be back."

Jordan is the former chairman of the House Freedom Caucus, a group of roughly 40 House GOP members on the right flank of the conference. Jordan boasted support from some conservative outside advocacy groups. He ran on a platform of playing offense against Democrats as they launch investigations into Trump and his administration.

"I think we're entering a world we haven't really seen," Jordan said ahead of the vote. "I think it's going to take an attitude and an intensity about standing up for the truth and fighting."

McCarthy adopted some of the same messaging. He told reporters that he will work with Democrats when he can, but not if it means a singular focus on investigating the president.

"Let me be very clear," McCarthy said. "If their agenda is simply investigations, impeachment and not focused on the hardworking American public, we'll be there to defend the American public."

Democrats have largely avoided discussing impeachment and say investigations will be one part of their agenda going forward. They also plan to focus on health care and the economic opportunity, two issues that were at the heart of their campaign pitches across the country.

It will be difficult for Republicans to stand in the way of those plans.

The job of official party leaders changes dramatically from the majority to the minority. Unlike in the majority, where leaders set the agenda, the minority leader has to keep up party morale despite having very little power over the day-to-day operations inside the Capitol.

Top GOP leaders will also lose their ability to offer amendments on key bills or other enticements to urge rank and file to stay united behind the leadership's message. The job will be even more complicated next year when Democrats launch investigations into the president, his family businesses and his administration.

Instead, the GOP leadership will have to manage the strategy for those committee members who will be forced to participate in the investigations — on top of pressure from the White House to protect the president.

And conservatives are making an aggressive push for greater control in the House, according to several Republican members and aides who were granted anonymity to discuss internal GOP negotiations.

Jordan is expected to run for chairman of the influential House Judiciary Committee. Current Freedom Caucus Chairman Mark Meadows, R-N.C., is also expected to make a bid for a slot on the House Oversight and Government Reform Committee.

Other top Republicans won leadership slots without a challenge. Whip Steve Scalise, R-La., was re-elected to remain the top GOP vote counter next year. He is well-liked among Republicans and rose to national prominence last year after he was shot and seriously injured at a GOP baseball practice in Virginia.

Scalise forged a close bond with his colleagues and Trump during his recovery and worked hard after Ryan's retirement announcement to raise money and stump for Republican candidates.

Wyoming Republican Liz Cheney also won her uncontested bid for House GOP conference chair. The No. 3 leadership slot is typically in charge of messaging and acting as a liaison between leadership and rank-and-file members.

Cheney said she will focus on retaking the majority in 2020 by going on offense against Democrats.

"We've got to be in a position where we're out there every day fighting," Cheney said. "We need to make sure we have a more aggressive approach, especially because we're in the minority."

House Democrats will elect their nominee to serve as speaker of the House and other top leadership positions for the next session when they officially take the majority later this month.

An earlier version of this story incorrectly described the target of the 2012 Benghazi attacks as the U.S. Embassy. A diplomatic compound and a CIA annex were attacked.