Accessibility links
2 Reports On The U.S. Military, 2 Different Messages The U.S. has spent nearly $6 trillion on wars since 2001, with no end in sight, according to one report. Another says the U.S. needs to ramp up military efforts to counter Russia and China. 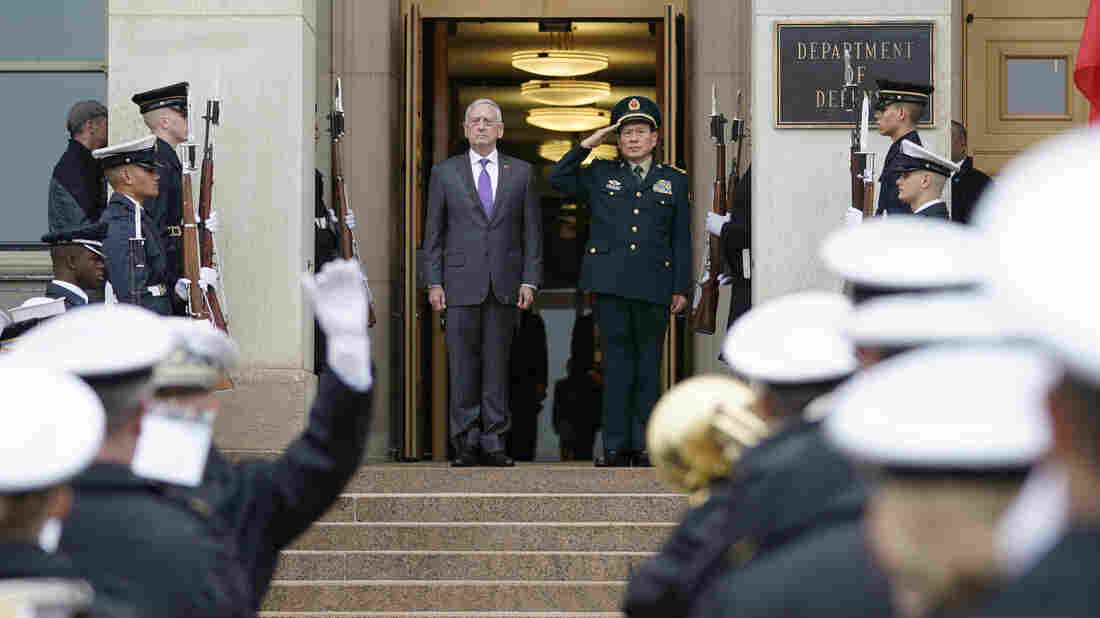 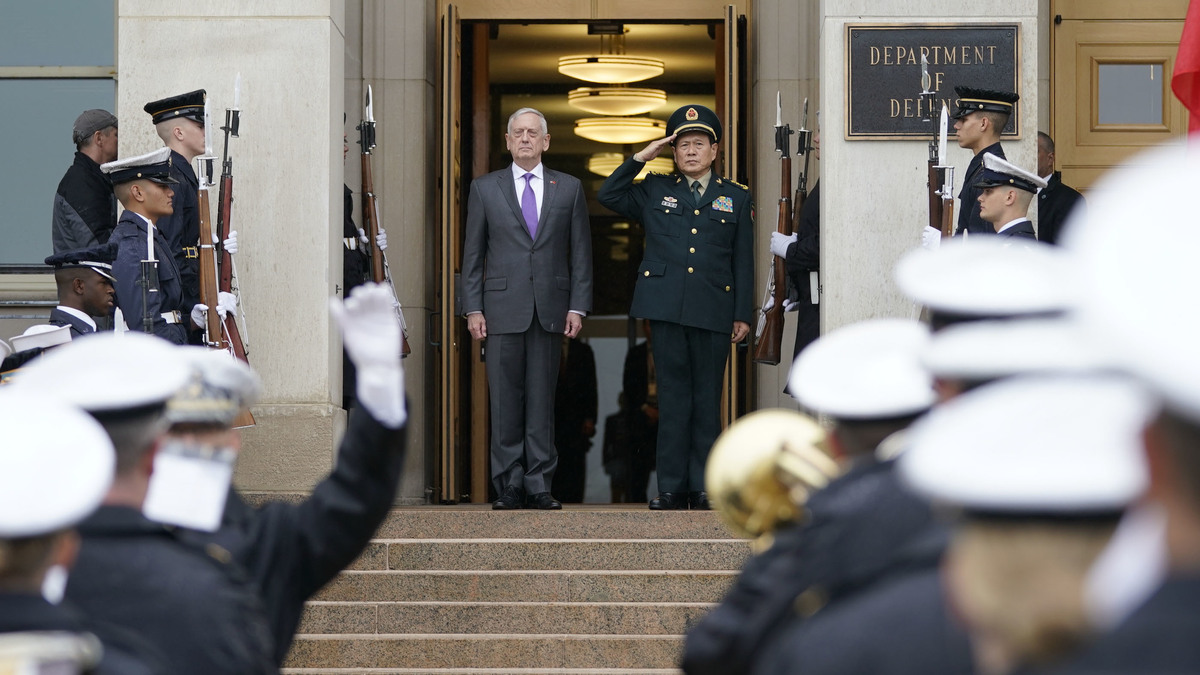 Defense Secretary Jim Mattis and China's Defense Minister Gen. Wei Fenghe stand as the national anthems are played before their meeting at the Pentagon on Friday.

Two new reports on the U.S. military were released Wednesday, and they offered contradictory messages.

One from the Watson Institute for International and Public Affairs at Brown University calculated that the U.S. has spent, or is obligated to spend, $5.9 trillion for wars in Afghanistan, Iraq and elsewhere since 2001. The U.S. has fallen far short of its goals in these wars, and many of these costs are largely hidden because they don't fall directly under the Pentagon, the report added.

The other report, by the National Defense Strategy Commission, a group of 12 former Republican, Democratic and national security officials, said U.S. security is "at greater risk than at any time in decades." It urged a ramping up of military preparedness on multiple fronts. It warned that the U.S. could potentially lose a war with Russia or China.

The Brown University report said that 480,000 people have been killed as a direct result of the wars in which the U.S. has been involved. More than 10 million civilians have been displaced in their home countries or become refugees abroad.

The U.S. is now conducting counterterrorism operations in 76 countries, according to the report by Neta Crawford of Boston University, who is co-director of Brown's Cost of War Project. The institute has been making calculations on the costs of the wars since 2011.

The Pentagon's figures on war expenditures are much lower, but these numbers cover only direct military spending. In March, the Pentagon put the figure at $1.8 trillion since 2001 — or about one-third of the number that Crawford calculated.

She has included in her estimate counterterrorism spending domestically by the Department of Homeland Security; interest payments to cover the government's borrowing costs; and estimates of current and future medical care for wounded veterans.

"There is no strategy to end the wars other than more of the same, in the hope that one day Iraqi and Afghan security forces will be able to fend for themselves," she said.

"In addition, the U.S. has escalated its involvement with wars and counterterror operations in Africa and Yemen. Nor is there a strategy for responsibly paying for these wars," Crawford added.

Calls for an upgrade

Meanwhile, the National Defense Strategy Commission unveiled its report on what it sees as serious shortcomings in the U.S. military.

The report said little about the wars in Iraq and Afghanistan or the threat posed by terrorist groups such as al-Qaida and the Islamic State.

Instead, it focused on traditional big-power rivalries, concentrating on China and Russia.

"The U.S. military could suffer unacceptably high casualties and loss of major capital assets in its next conflict. It might struggle to win, or perhaps lose, a war against China or Russia," the report said. "The United States is particularly at risk of being overwhelmed should its military be forced to fight on two or more fronts simultaneously."

The commission was created by Congress to evaluate the Trump administration's defense strategy, which was released earlier this year.

The report is supportive of the strategy and its focus on nation-versus-nation rivalries, rather than counterterrorism. The commission also issued more than 30 recommendations, and most or all would require increased spending. They include:

— Congress should increase the defense budget by 3 to 5 percent per year, and the military should build a larger force than the one that exists today.

— The U.S. should maintain "favorable military balances" against China in Asia and Russia in Europe.

— It called for a high-level commission to review the U.S. military's cyber policy.

President Trump and the Republican-controlled Congress have given the Pentagon substantial budget increases, with the military authorized to spend a record $716 billion in the current fiscal year.

Trump and many senior military officials say the hike was needed to recover from years of budget constraints that limited military spending.

However, last week's midterm elections will put the Democrats in control of the House starting in January, and they're considered likely to limit military spending going forward.

In addition, the White House has called on the Pentagon to trim spending as part of a governmentwide effort to gain control of a rapidly expanding budget deficit.

U.S. military spending remains the highest in the world by a huge margin. The U.S. currently spends about three times what China spends annually, and more than 10 times what Russia spends.