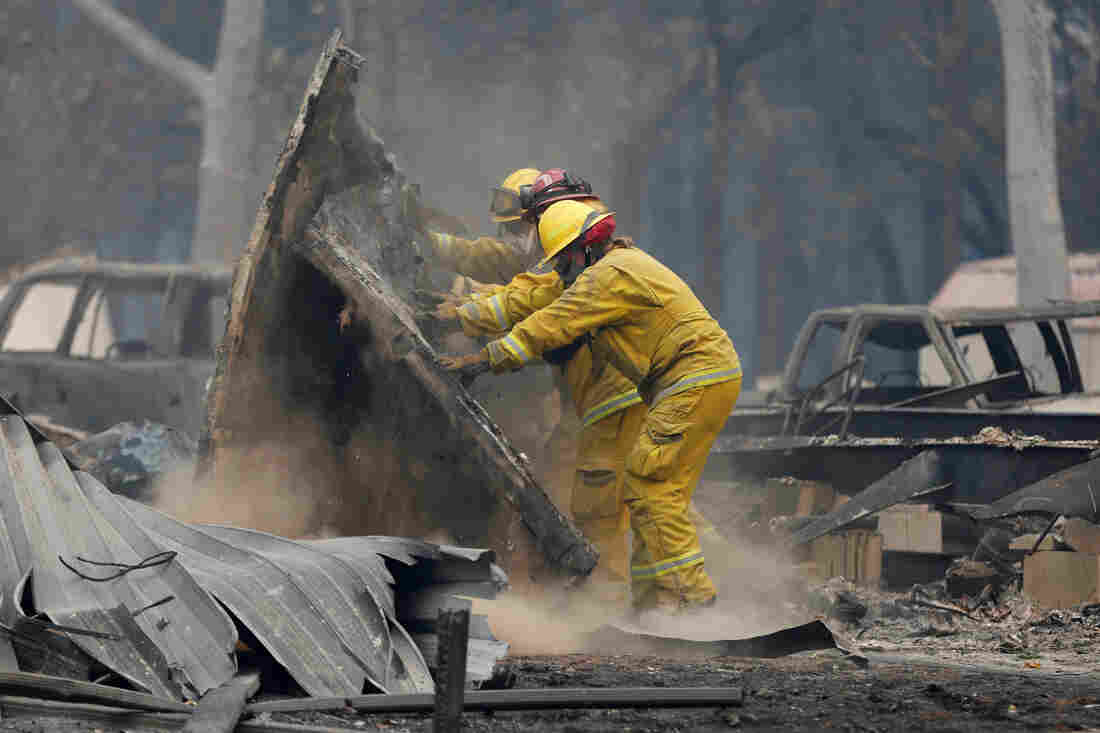 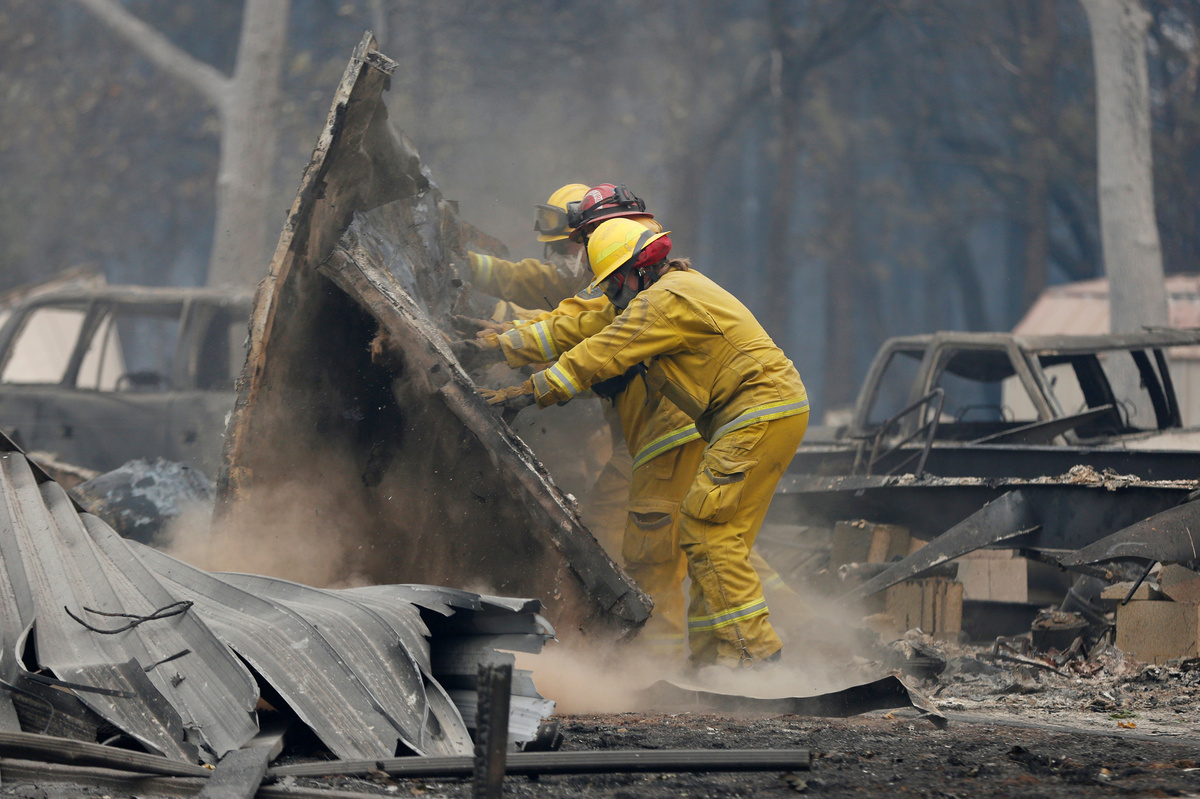 Cal Fire firefighters comb through a house destroyed by the Camp Fire in Paradise, Calif., on Tuesday.

Firefighters are making progress against several large fires in California, and they're holding the line against the deadliest wildfire in state history. But officials continue to tally the losses, and emergency crews are still trying to protect people and property from the flames.

The Camp Fire has killed at least 56 people and ravaged entire neighborhoods in Paradise and other Northern California towns.

In the Woolsey Fire to the south, officials announced another death. The total number of fatalities from these two major fires is 59.

The grim search for human remains in still-smoldering rubble has been aided by the arrival of almost 300 search and rescue personnel, including 50 National Guard troops.

Honea also said teams have been using 22 cadaver dogs to aid the search, and he expects to have a "rapid DNA identification system" in place soon so families can be informed of their relatives' deaths.

Authorities also announced Wednesday night that livestock owners in Butte County may apply for permits to enter evacuated areas to feed animals, but not to stay. 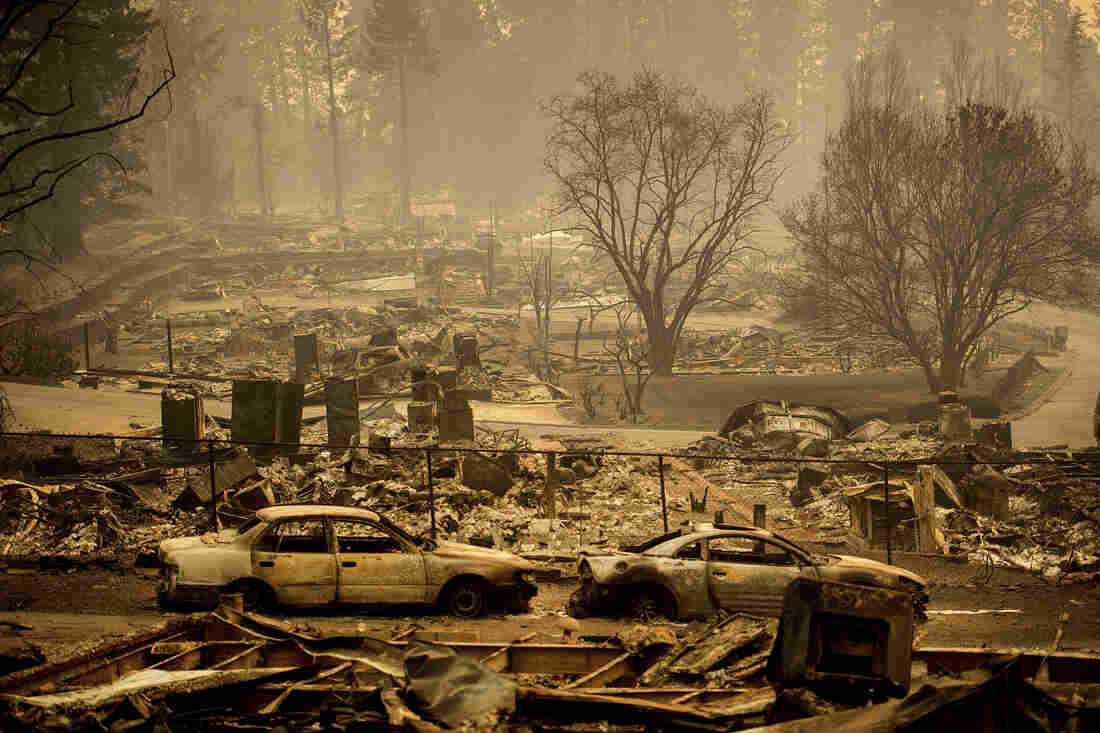 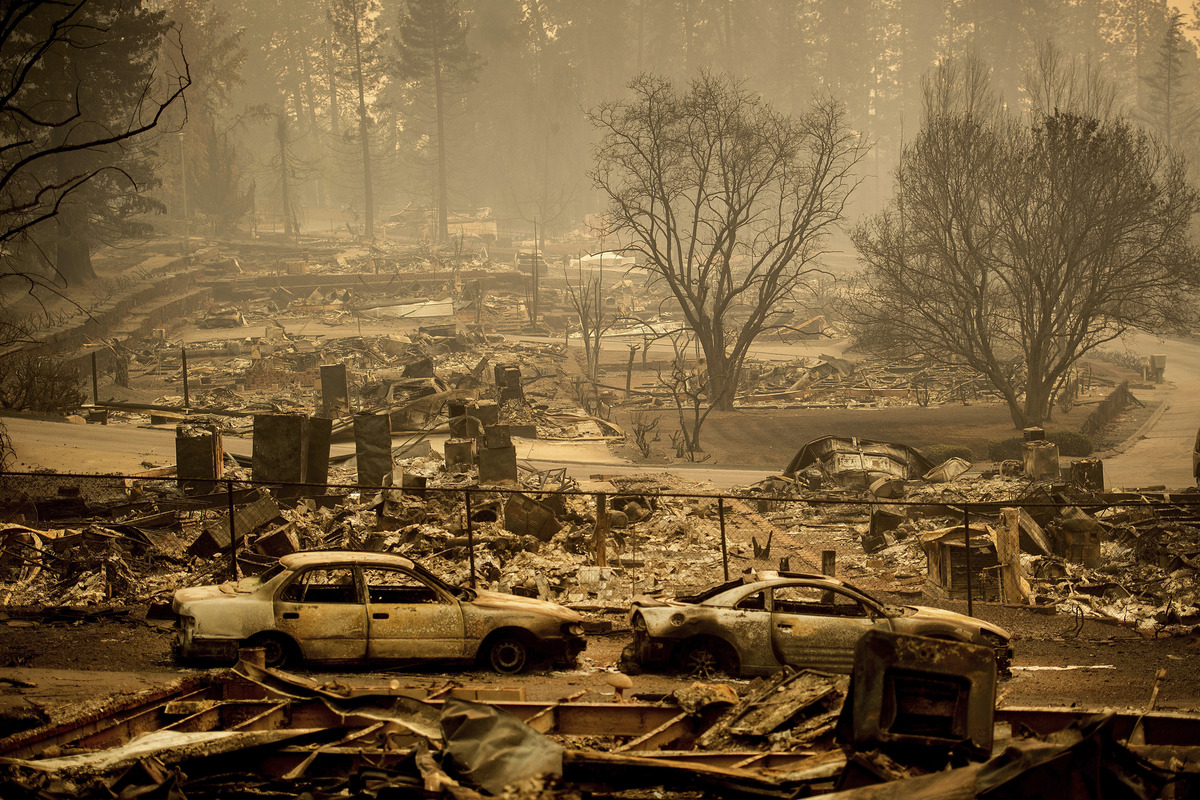 Because of the severity of the Camp Fire, the California Department of Forestry and Fire Protection has produced an online structure status map of Paradise and surrounding areas so people can check on the state of their homes without entering areas that are still active fire zones.

Here's where the largest blazes stand, as of Wednesday, according to the latest Cal Fire information.

I’ve unfortunately covered a lot of wildland -> urban wildfires in recent years. But the scale of this one is pretty staggering. pic.twitter.com/n5OXOqj9B7

The fire that erupted last Thursday near Jarbo Gap in Butte County has burned 138,000 acres and is still 35 percent contained — unchanged from Tuesday. It has also destroyed 8,650 residences. The total number of structures destroyed, including commercial buildings stands at 10,321. Evacuation orders remain in place for a large area east of Chico. 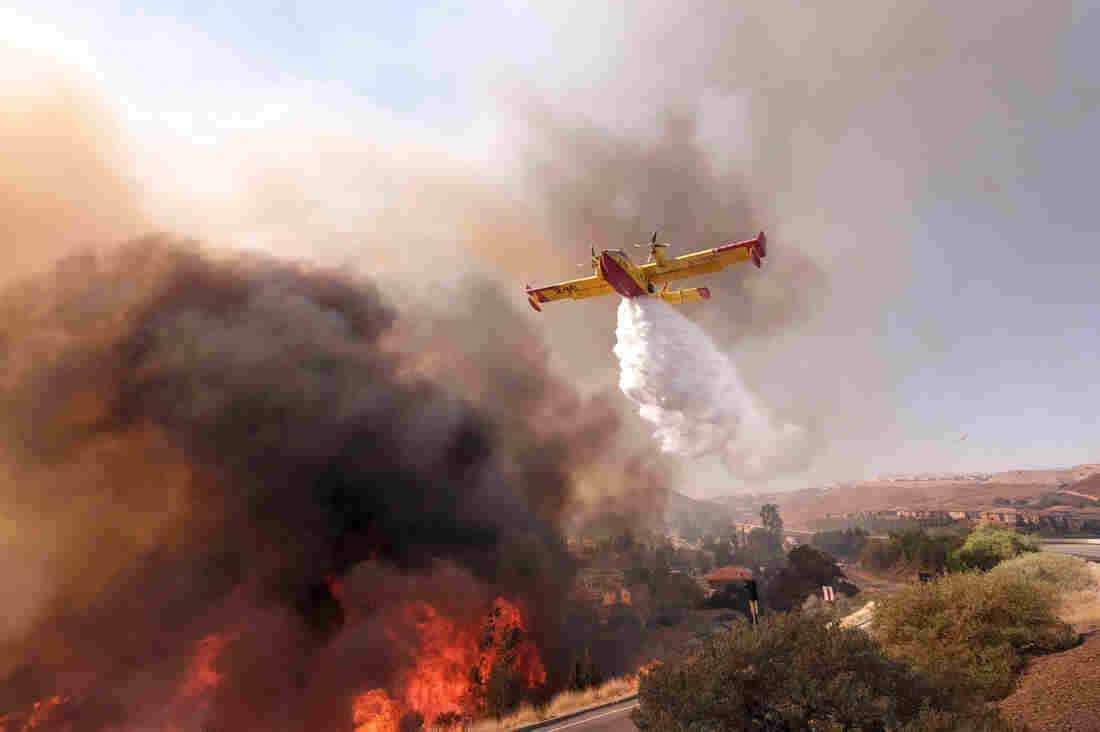 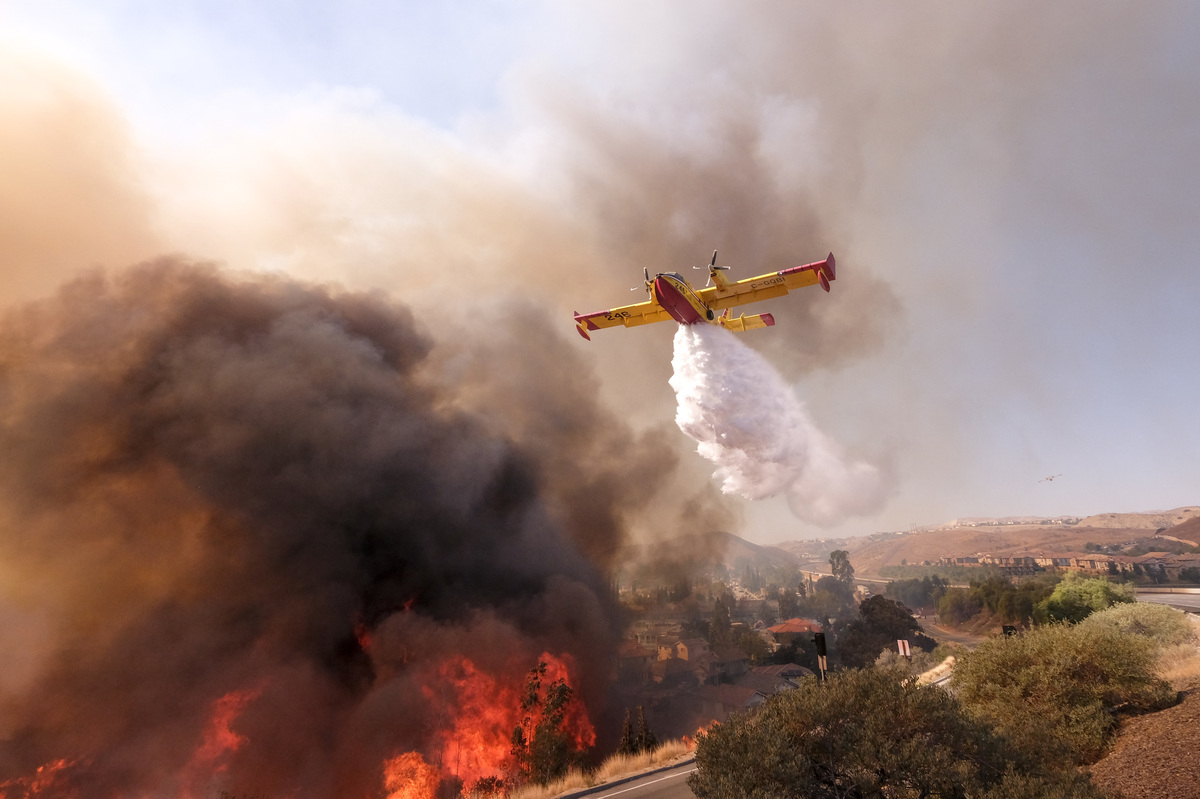 An air tanker drops water on a fire along the Ronald Reagan Freeway in Ventura County, Calif., on Monday.

The fire destroyed whole blocks of Paradise, leaving behind charred chimneys and walls standing amid smoldering ashes. As NPR's Kirk Siegler reports via Twitter, "the scale of this one is pretty staggering."

Woolsey Fire: The blaze that hit parts of Ventura and Los Angeles counties is now at 98,362 acres and is 52 percent contained, Cal Fire says. It's estimated to have destroyed 504 structures.

The fire is blamed for killing at least three people — and the death toll could rise.

"The Woolsey Fire is now one of the largest on record to burn in Los Angeles County," reports member station KPCC. The station's news partner, LAist, says some residents forced to flee will be given the OK to go back to their homes.

Residents and volunteers bring supplies from a boat coming from Redondo beach, with donations for residents of Malibu https://t.co/d8amZo3WIw pic.twitter.com/rCCyjcGaiB 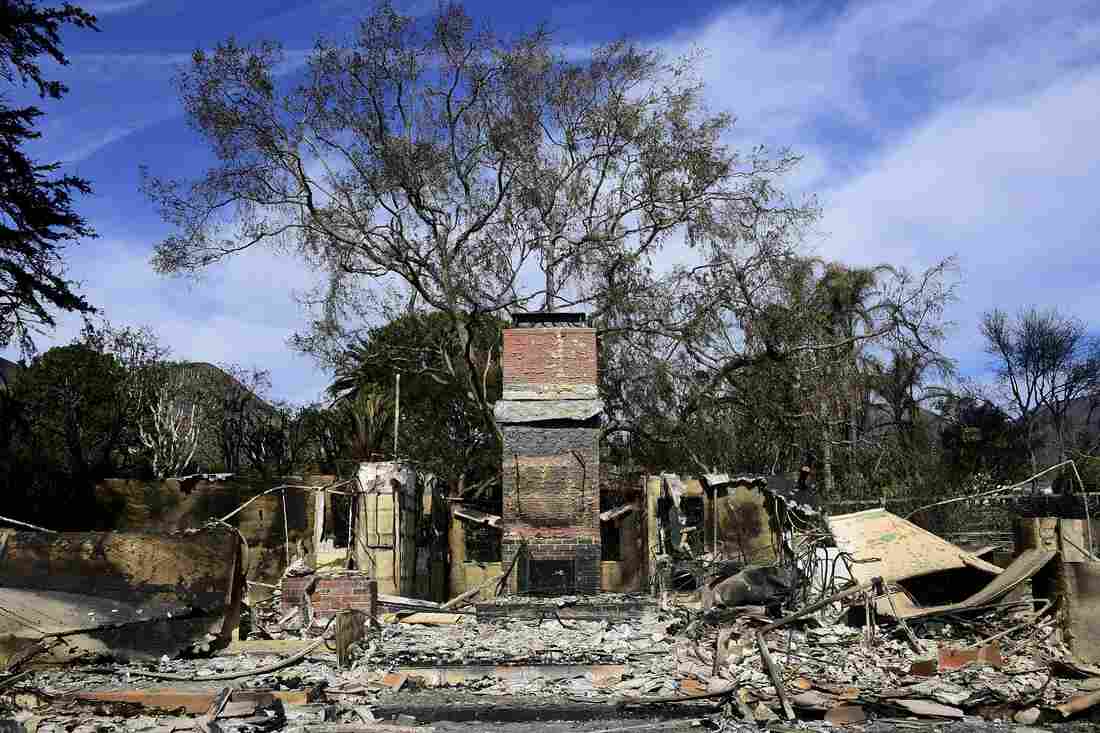 A fireplace and chimney are all that remains of a house in Malibu, Calif., on Tuesday. A group of volunteers are bringing in supplies for Malibu residents via a boat, the Los Angeles Times reports. Frederic J. Brown/AFP/Getty Images hide caption 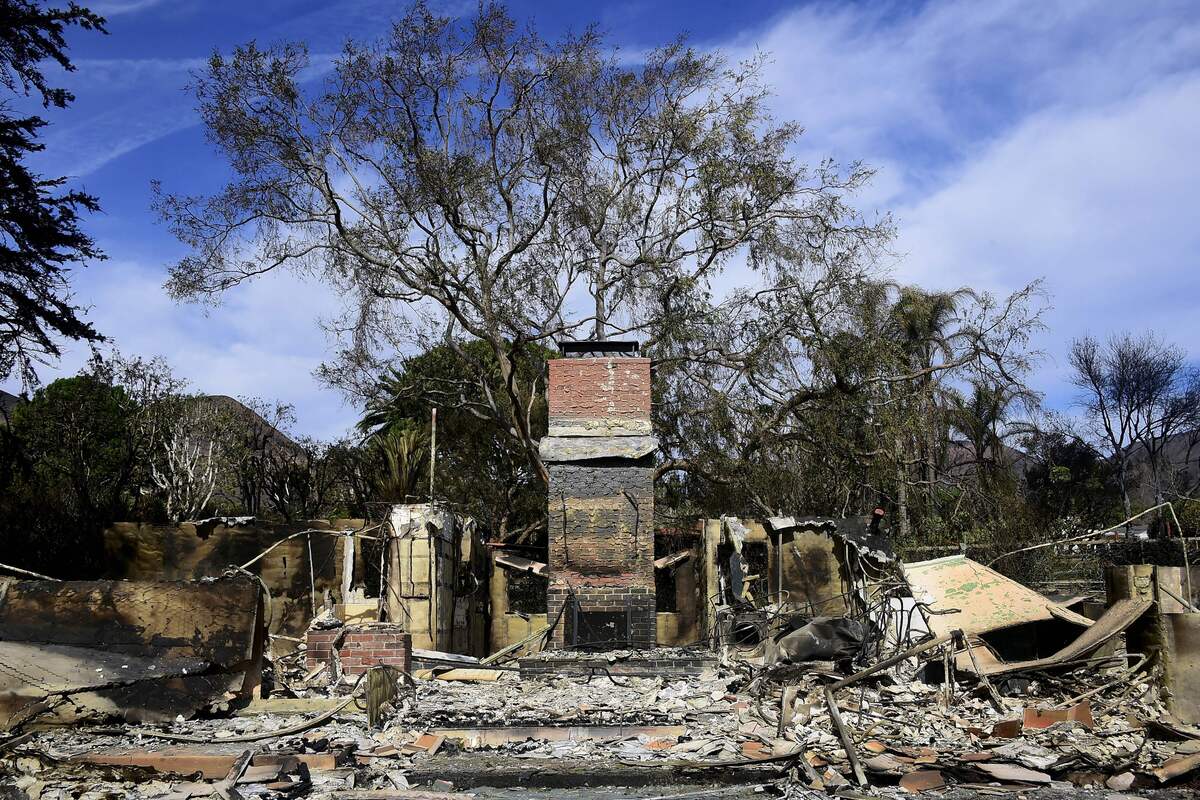 A fireplace and chimney are all that remains of a house in Malibu, Calif., on Tuesday. A group of volunteers are bringing in supplies for Malibu residents via a boat, the Los Angeles Times reports.

Cal Fire predicts the fire will be fully contained by Sunday. On Wednesday, the agency said, "Santa Ana winds will diminish through the day with weak onshore winds possible this afternoon along the coast. Firefighting resources will pursue opportunities to build and improve direct line to minimize further perimeter growth and support containment objectives."

With road closures making it hard to get supplies into Malibu, a group of volunteers organized themselves to "bring supplies from a boat coming from Redondo beach, with donations for residents of Malibu," the Los Angeles Times reported on Tuesday.

Hill Fire: The blaze, one of two to strike in Ventura County the day after last week's mass shooting in Thousand Oaks, is now 96 percent contained. It has charred 4,531 acres.

Officials believe the fire, located west of the Woolsey wildfire, will be completely contained on Thursday.

#SierraFire: Footage from earlier this evening. In #SantaAnaWinds, Dozers can often engage where it’s too dangerous for handcrews. A decisive force multiplier in tonight’s firefight. ^eas pic.twitter.com/gtqmJB5pk6

Sierra Fire: The fire that popped up Wednesday night showed how quickly wildfires can develop when they're driven by offshore winds.

Video footage released by the San Bernardino County Fire District showed the powerful Santa Ana winds whipping the blaze as a bulldozer was deployed to help limit the fire's spread.

FOR SHARING: Watching the news about the #wildfires can make you feel powerless. Here's a list of things you can do today to actively help those affected by the #CampFire in #ButteCounty, via @KQEDnews. https://t.co/MGCCaFUdwN

Despite the ferocity of the flames, the fire was not deemed to be a threat to residents, largely because of its direction; officials said an evacuation order was not needed.

KQED has published a list of ways people can help those who have lost their homes or property in the wildfires, from volunteering to donating money or materials.

Capital Public Radio in Sacramento also has created a list of organizations and relief groups that are working to help victims of the destructive wildfires.

The Camp Fire is expected to exacerbate housing problems in Butte County, where the flames decimated the housing stock.

"There is no housing for them in the county or in the neighborhood or even in California," says Ed Mayer, director of the county's housing authority, in a report by NPR's Eric Westervelt. "So we really have no capacity to absorb a disaster like this."

Reporting from Chico, Eric adds, "Mayer says with a near zero vacancy rate and a housing crisis even before the fire, some displaced people may be forced to leave the state or risk homelessness.

As people have fled the area around Chico and Butte County, volunteers and aid groups have also worked to help animals survive the fires. This week, the North Valley Animal Disaster Group said it was looking after more than 1,450 animals. The list includes more than 440 cats and 340 dogs, 130 horses, two cows and an alpaca.

The causes of the wildfires in Northern and Southern California are still under investigation. Following reports that two electric utilities reported problems in the locations of the Camp and Woolsey fires minutes before those blazes began, a lawsuit has been filed accusing Pacific Gas & Electric of negligence, according to KQED.

Here's the current map of fires in California, from Cal Fire: