Accessibility links
British Ministers Quit Government In Row Over Draft Brexit Deal U.K. Prime Minister Theresa May says her government is preparing for a no-deal Brexit after two key Cabinet ministers resigned in protest of a draft agreement to leave the European Union. 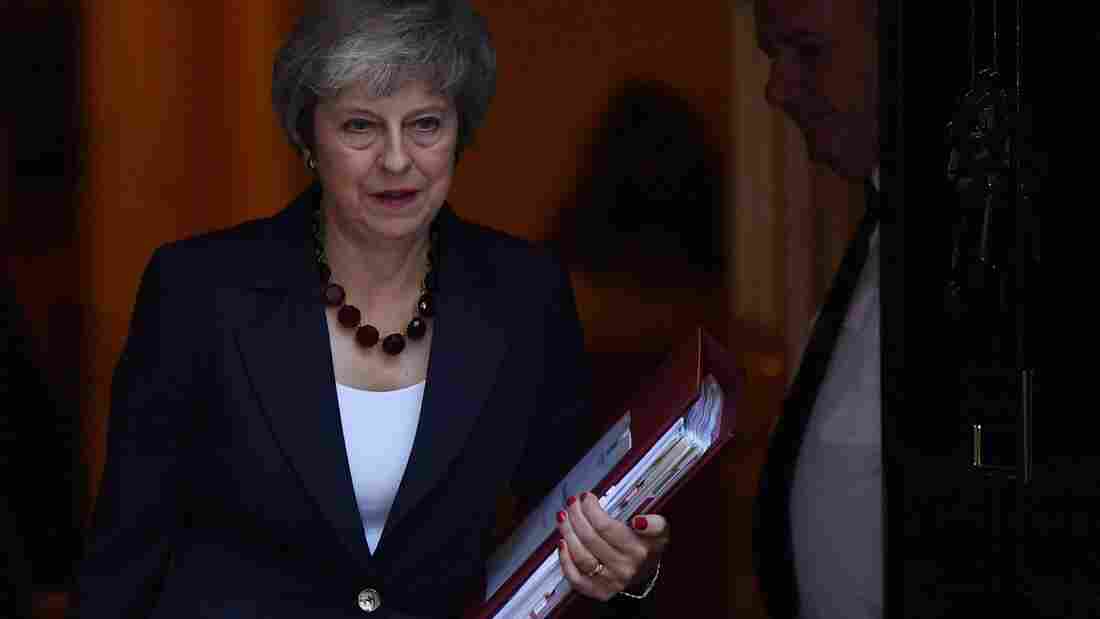 British Prime Minister Theresa May faces the difficult task of persuading skeptical Brits to get on board with a tentative agreement with European Union negotiators. Ben Stansall/AFP/Getty Images hide caption 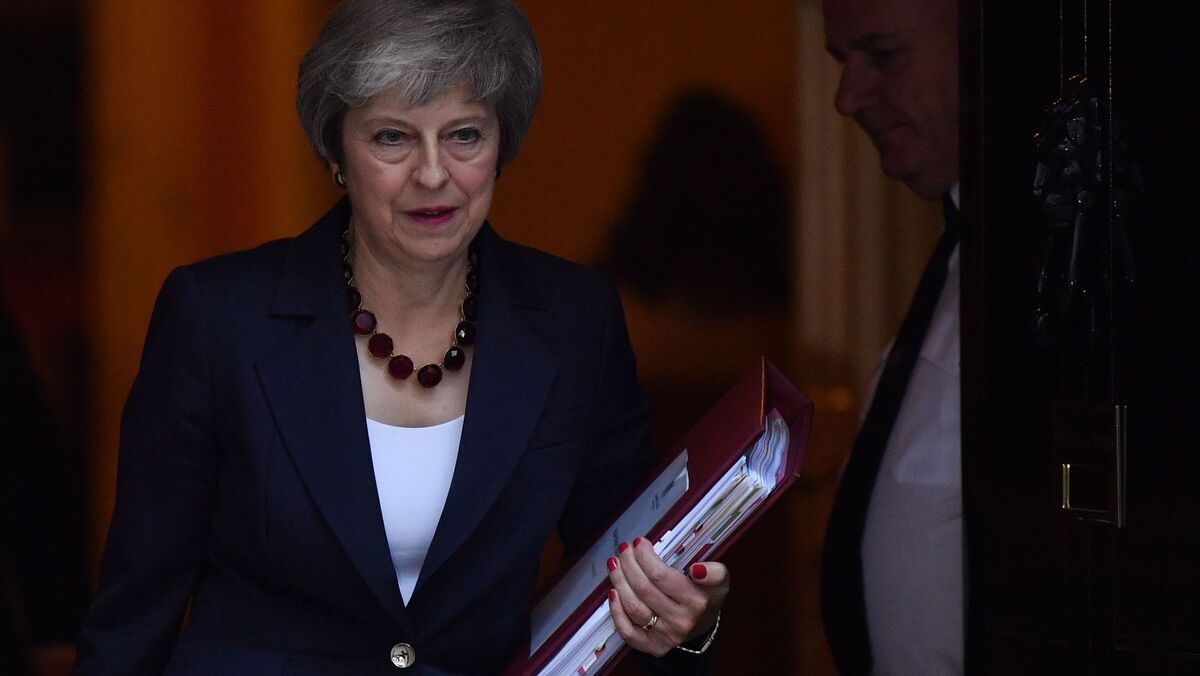 British Prime Minister Theresa May faces the difficult task of persuading skeptical Brits to get on board with a tentative agreement with European Union negotiators.

Hours after British Prime Minister Theresa May announced a tentative deal charting the United Kingdom's exit from the European Union and assuring the public that her Cabinet supported it, two key ministers abruptly quit her government in protest over the proposed pact.

The first to call it quits was Brexit Secretary Dominic Raab, who said in a letter of resignation that he could not "in good conscience" support the draft deal. Not long after, Work and Pensions Secretary Esther McVey followed suit.

Their departure, and the exit of two junior ministers, deals a serious blow to May, whose political survival is closely linked to Brexit.

After the resignations, May appeared in the House of Commons to defend the proposed agreement — but also said her government is continuing to prepare for a no-deal exit, should it be necessary.

"Mr. Speaker, what we agreed yesterday was not the final deal," she said to jeers from the opposition.

"It is a draft deal that means we will leave the EU in a smooth and orderly way on the 29 of March 2019," May said to loud laughter, "and which sets the framework for a future relationship deliver in our national interest."

"We have been preparing for no-deal and we continue to prepare for no-deal because I recognize that we have a further stage of negotiation with the European Council, and then that deal when finalized ... has to come back to this House," she told lawmakers.

"This puts us close to a Brexit deal"

The travails of the past 24 hours mark a stark change from the hopeful note May sounded Wednesday afternoon, when she left the prime minister's residence to announce that her closest ministers supported the tentative deal.

"This is a decisive step, which enables us to move on and finalize the deal in the days ahead," May told reporters at the time, standing outside No. 10 Downing St. "These decisions were not taken lightly, but I believe it is firmly in the national interest."

Demonstrators who had gathered near the media bellowed their disapproval during her remarks Wednesday.

Besides the ministers who quit Thursday, dozens of other British lawmakers across the ideological spectrum have expressed skepticism — or outright rejection — of the draft. Many of them began doing so even before they got a look at its formal details. Some of the loudest critics have come from within May's own Conservative Party. 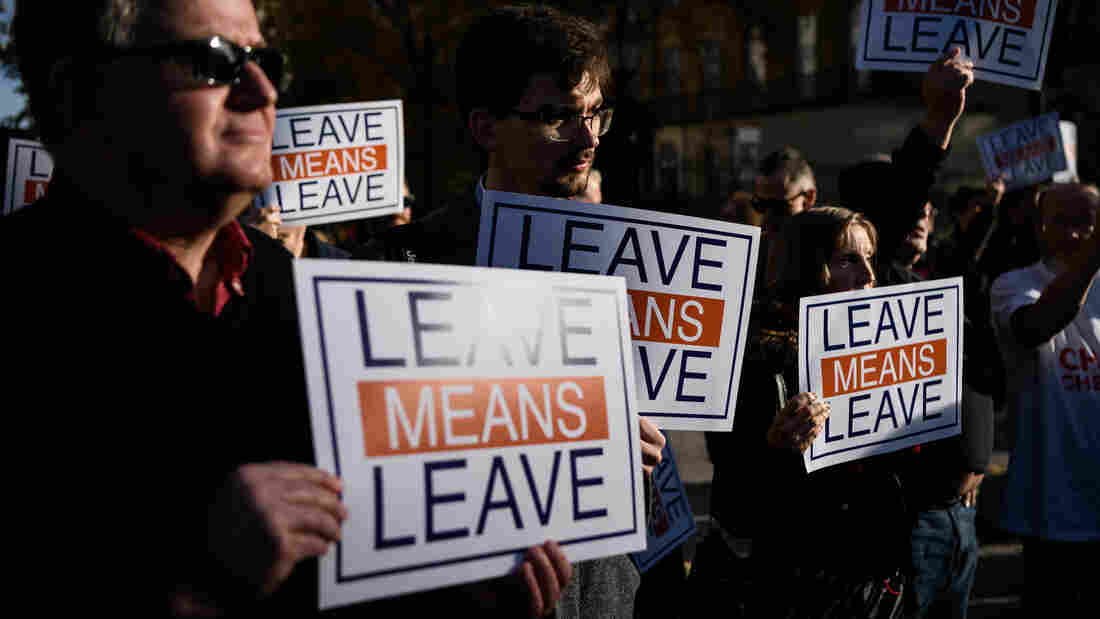 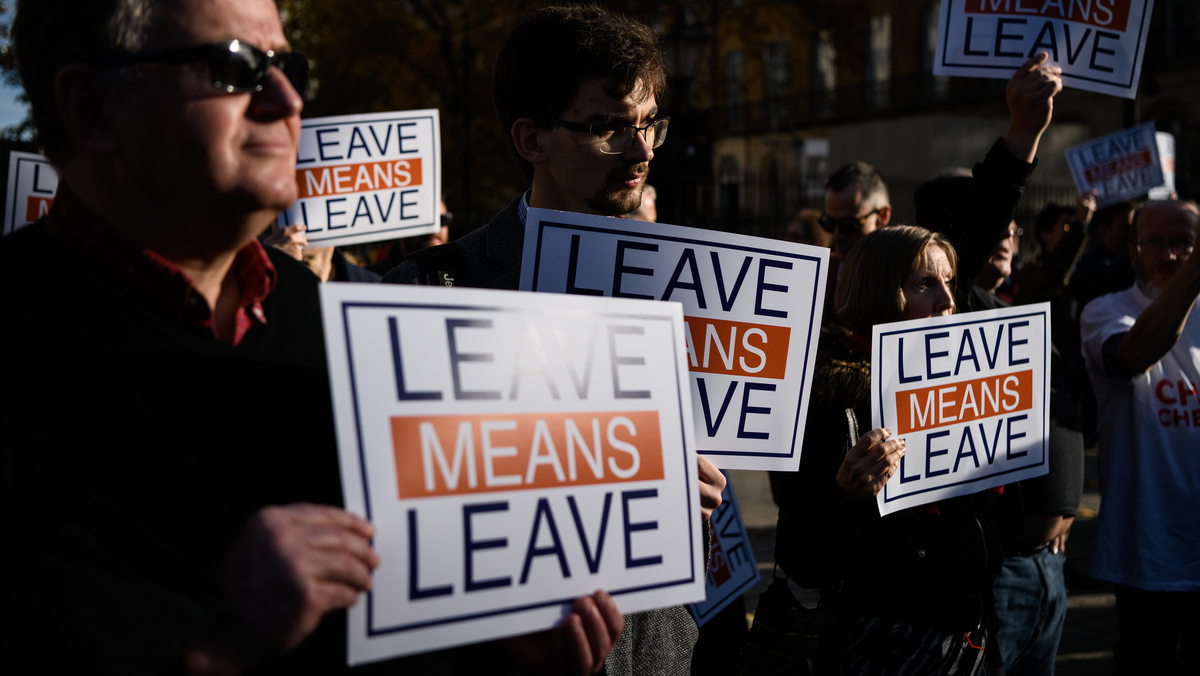 Brexit supporters demonstrate Wednesday in London against a draft deal they believe doesn't go far enough in distancing the U.K. from the European Union.

"Is the prime minister aware that, if the media reports about the EU agreement are in any way accurate, you are not delivering the Brexit people voted for and today you will lose the support of many Conservative [members of Parliament] and millions of voters across the country?" Peter Bone, a Conservative hard-line Brexit supporter, told lawmakers Wednesday.

Many Conservatives are upset that the deal does not go far enough in separating the U.K. from the European Union's single market. They argue that several of the provisions in the 585-page draft agreement — now published in full online — leave the U.K. subject to EU regulations in several of the most contentious areas, including a long transition period and protections for U.K. and EU nationals abroad.

But perhaps the most divisive issue covered in the agreement comes some 300 pages in: the thorny matter of Northern Ireland. 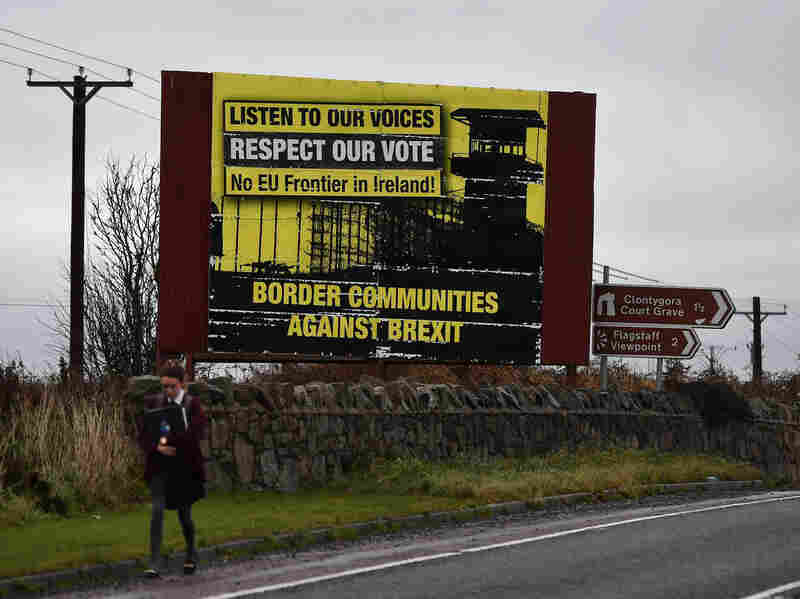 A student walks past a billboard in Newry, Northern Ireland, protesting the U.K.'s departure from the European Union. Charles McQuillan/Getty Images hide caption 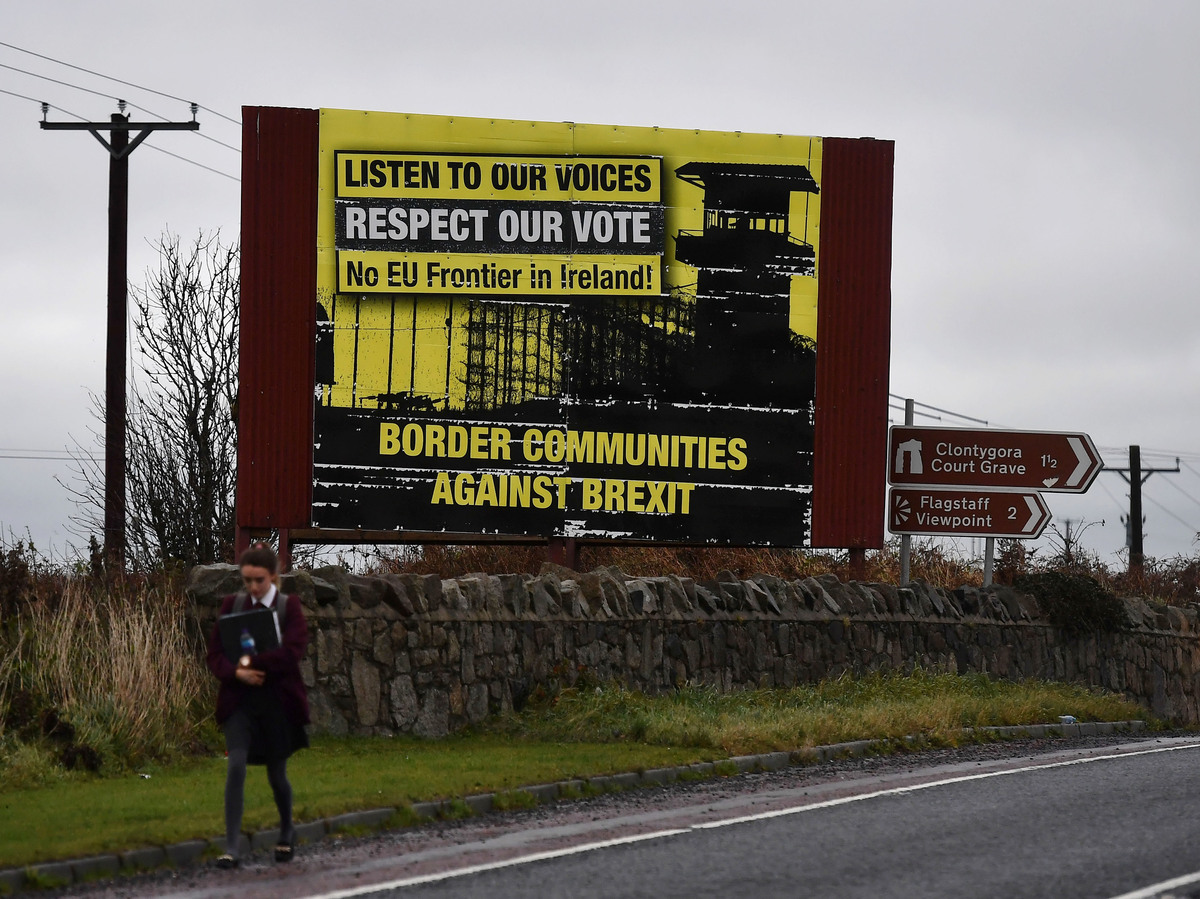 A student walks past a billboard in Newry, Northern Ireland, protesting the U.K.'s departure from the European Union.

Under the 20-year-old Good Friday Agreement, which ended decades of sectarian violence, Northern Ireland shares an open land border with the Republic of Ireland, a member of the EU.

That border has been problematic for negotiators. As NPR's Frank Langfitt has reported, it is "seamless and practically invisible. Brexit could change that and force the need for customs posts that would anger the thousands of people who cross the border each day."

"Many also fear such posts could also spark a return to violence from the era of 'the Troubles,' a conflict from the 1960s to the late 1990s between predominantly Protestant unionists who wanted to remain part of the U.K. and largely Catholic republicans, which cost more than 3,600 lives."

It's also problematic for May, in particular, as her fragile governing coalition depends on the support of the relatively tiny Democratic Unionist Party in Northern Ireland. Though a majority of the region in 2016 voted to remain in the EU, the DUP has vehemently objected to a deal leaving it "tied to EU regulations."

"It's a poor deal. It's a bad deal. It's a deal that [May] said she'd never accept," Sammy Wilson, the DUP's Brexit spokesman, told the BBC on Wednesday. "And I think that when it comes to the House of Commons, she's going to find that there are many people who share that view."

The draft agreement has also come in for criticism from some of the usual suspects — May's rivals in the opposition Labour Party and Scottish First Minister Nicola Sturgeon, who had campaigned to remain in the EU. In contrast with the DUP, Sturgeon's complaint centers on Scotland's greater distance from the EU.

"It would take Scotland out of the single market, which would be bad enough in and of itself, but it would do so while leaving us competing for investment and jobs with a Northern Ireland that would effectively be staying in the single market," Sturgeon told British broadcaster ITV. "That would be the worst of all possible worlds."

Not long off call with PM. She tried to tell me Scotland’s ‘distinctive’ interests had been protected. I pointed out that there isn’t a single mention of Scotland in the agreement, that it disregards our interests, and puts Scotland at a serious competitive disadvantage.

That said, the deal has the backing of many EU members — including the taoiseach (prime minister) of the Republic of Ireland, Leo Varadkar. He praised the agreement as "a very solid step on the journey."

The EU's chief negotiator, Michel Barnier, described the deal in similar terms when speaking to reporters in Brussels. "I have the feeling that we have taken a very decisive, and fundamental step today towards an orderly withdrawal," he said.