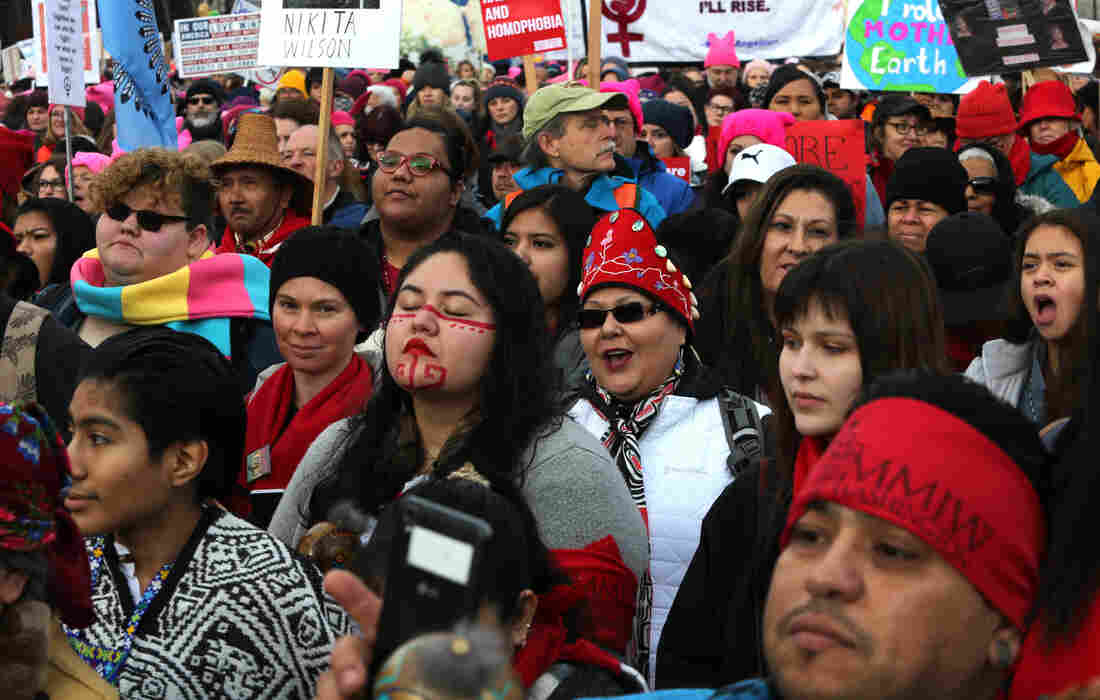 People listen to speakers raising awareness about missing and murdered Indigenous women at a rally at Cal Anderson Park in Seattle prior to the Women's March on January 20. A new report examines missing and murdered Indigenous women in cities, not on reservations, and found local law enforcement agencies often do not adequately track such crimes. Karen Ducey/Getty Images hide caption 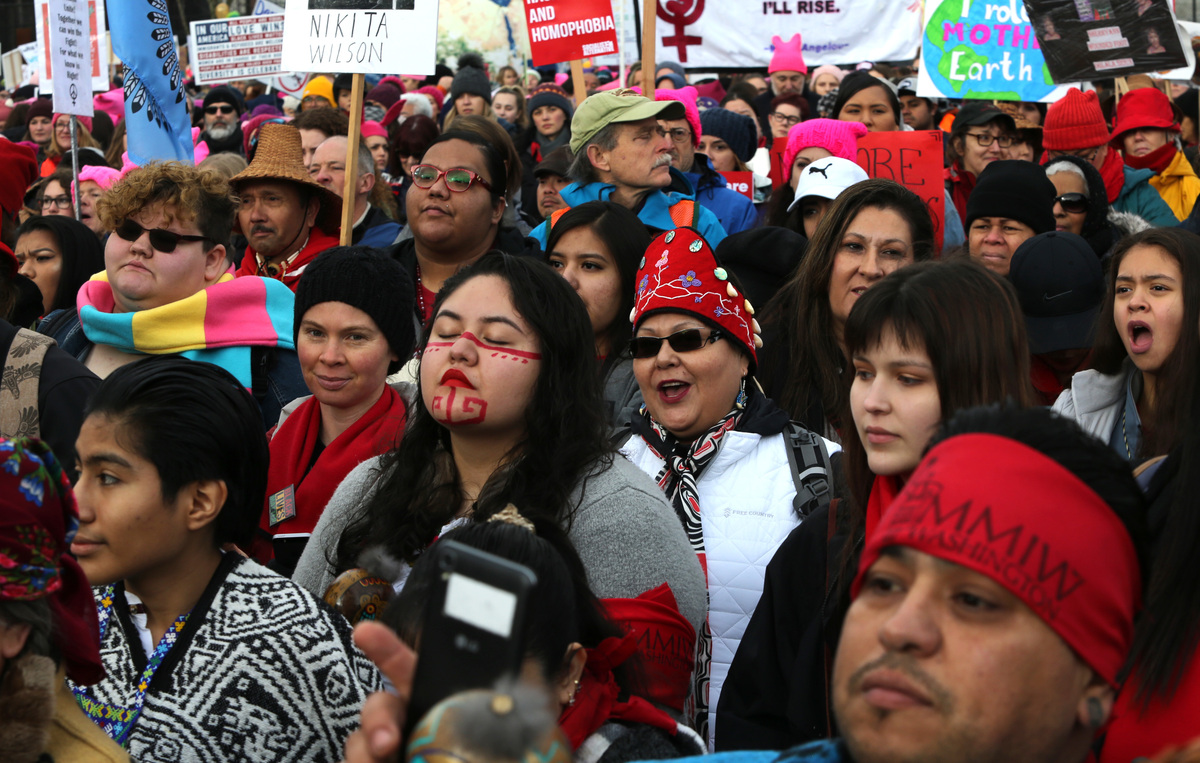 It sounds like a simple question for a police department. How many Native American women have gone missing or been murdered in a given city? In Seattle, say. Or Albuquerque. Or Salt Lake City. Or Baltimore.

But when researchers Abigail Echo-Hawk and Annita Lucchesi asked 71 cities across the U.S. for the answer, they found more silence and confusion than answers.

In a report released Wednesday, Echo-Hawk and Lucchesi say nearly 60 percent of police departments either did not respond to the request, or returned partial or compromised data — with some cities reporting an inability to identify Native victims, and others relying exclusively on human memory.

Searching news outlets to fill in the gaps was no solution: Of the 506 disappearances and murders they were able to document, the majority were never covered by any news outlet.

As a result, the missing and murdered indigenous women have disappeared "not once, but three times," the researchers write: "in life, in the media, and in the data."

Echo-Hawk, an enrolled citizen of the Pawnee Nation of Oklahoma, is the director of the Urban Indian Health Institute at the Seattle Indian Health Board. Lucchesi, a descendent of the Cheyenne people, is a doctoral intern at the UIHI, which researches public health issues among Native American populations nationwide.

Lucchesi has been working for years to document the deaths and disappearances of Native American women. A previous project of hers — a database of missing and murdered indigenous women in both Canada and the U.S. — was profiled for NPR this summer by Yellowstone Public Radio's Nate Hegyi.

Native women living on tribal lands are murdered at an extremely high rate — in some communities, more than 10 times the national average, according to research funded by the Department of Justice. And in part because of jurisdictional challenges, the disappearances can be hard to track and prosecute.

But the new project is unique because of its focus on cities. The UIHI notes that more than 70 percent of Native Americans in the U.S. live in urban areas.

"So much of the conversation on this issue has been focused on reservations," Lucchesi says. "This is happening to our urban women too. It isn't just a matter of jurisdiction — it's a matter of racism."

As Hegyi wrote this summer, "spend time in Indian Country and you'll hear this story over and over: A niece, a daughter or a cousin who was taken quickly and violently from this world."

But no federal agency has comprehensive data on how many indigenous women are murdered or missing. A spokesman for the FBI's Criminal Justice Information Services division declined to comment to NPR on the issue.

And the problem isn't limited to the U.S.

Canada is currently investigating the number of indigenous women missing and murdered in that country, after determining that police were underreporting and failing to investigate cases.

A preliminary study by Canadian police found that indigenous women — 4 percent of Canada's female population — made up nearly 25 percent of its female homicide victims in 2012.

In the U.S., Echo-Hawk and Lucchesi are calling for resources to be dedicated to the issue (their study was conducted without federal funding) and for local law enforcement agencies to carry out better data collection.

"Record-keeping protocols must be updated and implemented immediately," they concluded. "No agency can adequately respond to violence it does not track."

On Wednesday, a bill designed to help address the problem passed through the Senate Committee on Indian Affairs and is heading to the full Senate for consideration. The measure, called Savanna's Act, calls for new protocols on reporting crimes against Native Americans, among other improvements.

To augment the partial police data, Echo-Hawk and Lucchesi searched media reports and spoke with local indigenous communities — in the process, finding more than 150 missing and murdered women that police did not identify.

They ultimately identified 506 missing and murdered indigenous women in those 71 cities. But they caution, given the significant limitations of the data, that it's far short of the true total.

"The 506 are just the ones we know about ... it's just the beginning. It's barely scratched the surface," Echo-Hawk says. "I know that there are hundreds, thousands and more that aren't in this data and haven't been captured."

Some cities said they could not search for Native American, American Indian or Alaskan Native victims within their databases. The problems were often baked into the systems themselves: For instance, the police department in Fargo, N.D., told the researchers that if a victim's race is not identified, the city's record system "defaults to white."

Other cities returned data that appeared to conflate indigenous Americans with Indian-Americans, with surnames such as "Singh." In some cases, police departments did not distinguish between missing or murdered women.

And Echo-Hawk says that because police departments don't track tribal affiliations, tribes don't find out if their members are victims of crime.

"If I was to go missing or be murdered, my tribe should be notified that one of their citizens of a sovereign nation within the United States has gone missing or murdered," she says. "[Law enforcement] would do that if I was a citizen of Switzerland. Why are they not doing that and notifying my tribal communities?"

Lucchesi — who herself survived rapes and violent attacks in four of the cities featured in the report — says this work is both frustrating and empowering.

"It's heartbreaking to spend an entire year trying to convince 72 police departments that your dead are worth counting," she says. "But this work has also been healing for me as a survivor of violence."

"Constantly reaffirming that the lives of your sisters and your relatives do mean something — it also reaffirms to me, myself, that my life does mean something," Lucchesi says.