Accessibility links
Brexit Tumult Wracks U.K. As Top Ministers Reject Draft Deal With European Union Prime Minister Theresa May is taking flak from across the ideological spectrum amid a series of resignations. Some are demanding a no-confidence vote; others are demanding an entirely new referendum. 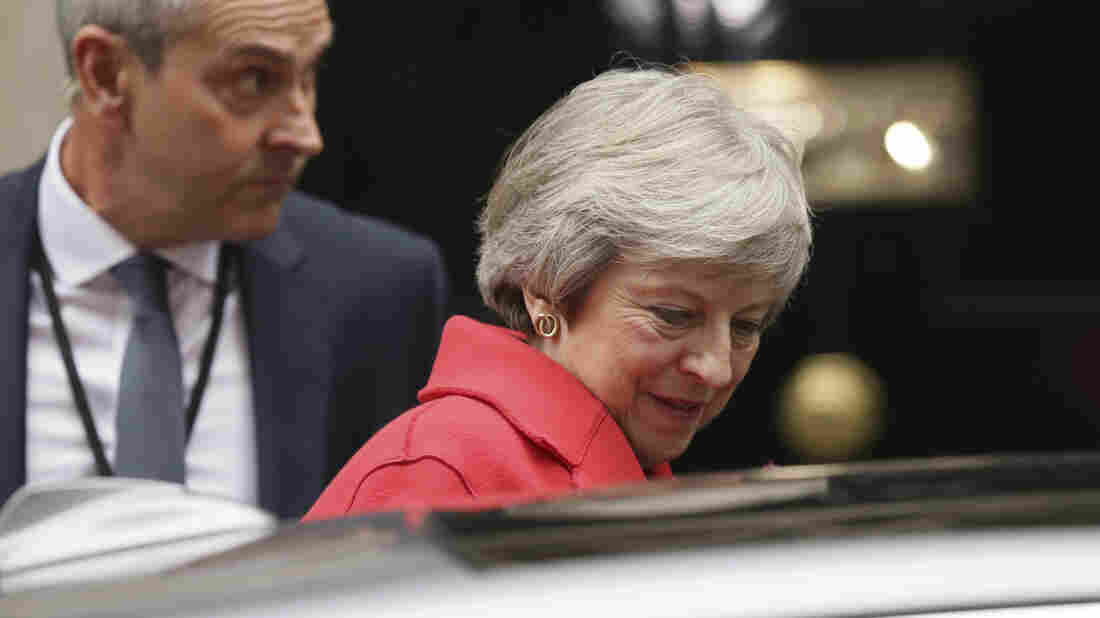 British Prime Minister Theresa May leaves No. 10 Downing St. for the Houses of Parliament on Thursday. Her speech there defending the tentative Brexit deal did little to calm critics — either among her political rivals or within her own party. Tim Ireland/AP hide caption 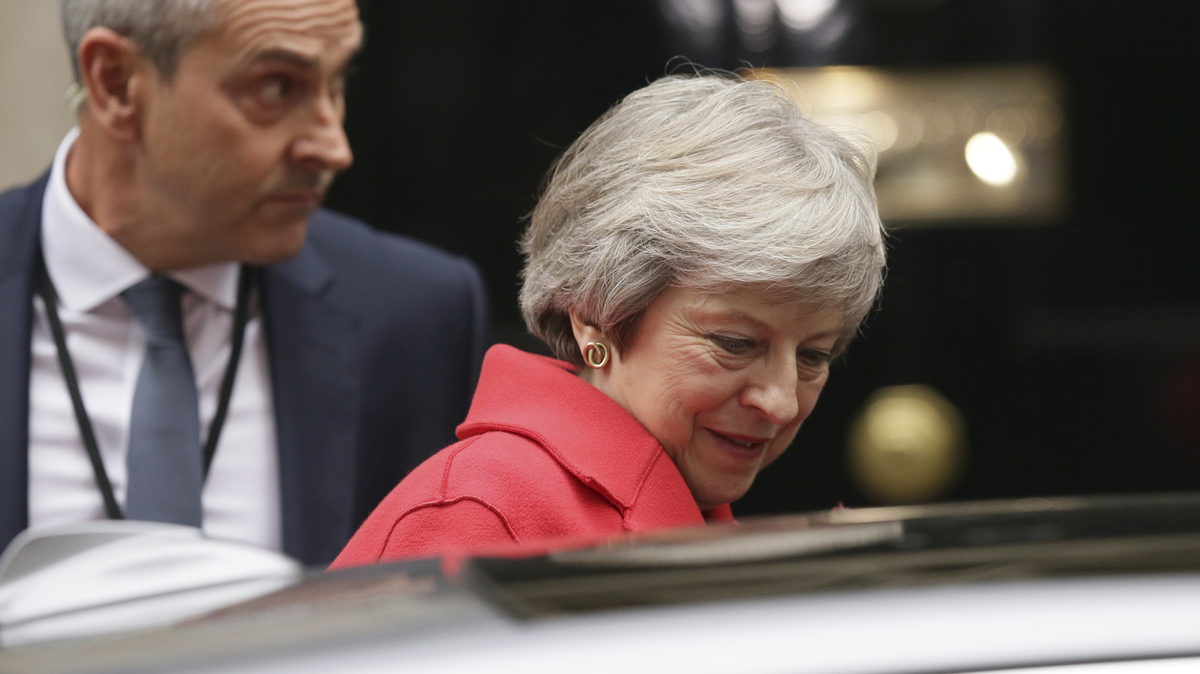 British Prime Minister Theresa May leaves No. 10 Downing St. for the Houses of Parliament on Thursday. Her speech there defending the tentative Brexit deal did little to calm critics — either among her political rivals or within her own party.

Already reeling from a string of protests and resignations, British Prime Minister Theresa May is fighting for more than the draft Brexit deal she has negotiated with the European Union. With a mutiny afoot within her own Conservative Party, the prime minister may be battling for her political life, as well.

"Regrettably, the draft Withdrawal Agreement presented to Parliament today has turned out to be worse than anticipated and fails to meet the promises given to the nation by the Prime Minister, either on her own account or on behalf of us all in the Conservative Party Manifesto," Jacob Rees-Mogg said in a letter requesting a vote of no-confidence on May.

Rees-Mogg leads the European Research Group, a hard-line faction within the Conservative Party that has pushed for as much distance as possible between Britain and the EU. At least two other Conservative members of Parliament, Henry Smith and Sheryll Murray, submitted letters of no-confidence Thursday.

Graham Brady, the chair of a committee of backbench Conservatives, must receive 48 letters before such a vote is triggered within the party. It remains unclear whether Rees-Mogg and his fellow Brexiteers will have the numbers to do so.

My letter of no confidence in the Prime Minister. pic.twitter.com/Bind9T7ogO

Whatever the result of Rees-Mogg's push, it's a sign that things aren't going as planned for May, who unveiled the 585-page draft text earlier this week after months of hard-fought negotiations. The tentative deal charts a course for the U.K. when it leaves the EU in March 2019.

It includes controversial solutions to some particularly difficult problems, foremost among them the status of Northern Ireland, which is part of the U.K. but shares an open land border with Ireland, an EU member. Under the draft deal, Northern Ireland would largely remain in the European Union's single market allowing free movement of goods and services and thus remain subject to EU regulations. That's a nonstarter for critics including May's key Northern Irish allies, the Democratic Unionist Party.

"I know it's been a frustrating process. It has forced us to confront some very difficult issues. But a good Brexit — a Brexit, which is in the national interest — is possible," May told the House of Commons on Thursday. "We have persevered and have made a decisive breakthrough."

"Voting against a deal," she added, "would take us all back to square one." 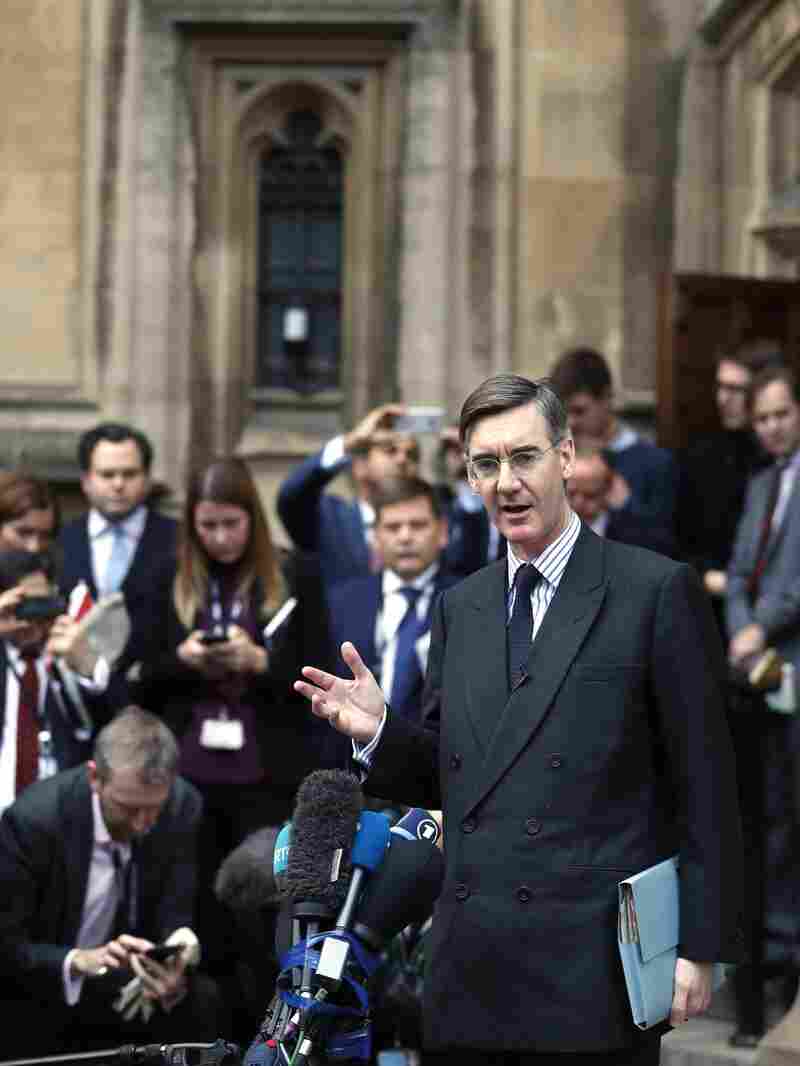 Jacob Rees-Mogg, leader of the hard-line pro-Brexit European Research Group, speaks to the media Thursday outside the Palace of Westminster. The Conservative lawmaker requested a vote of no-confidence in Prime Minister Theresa May. Adrian Dennis/AFP/Getty Images hide caption 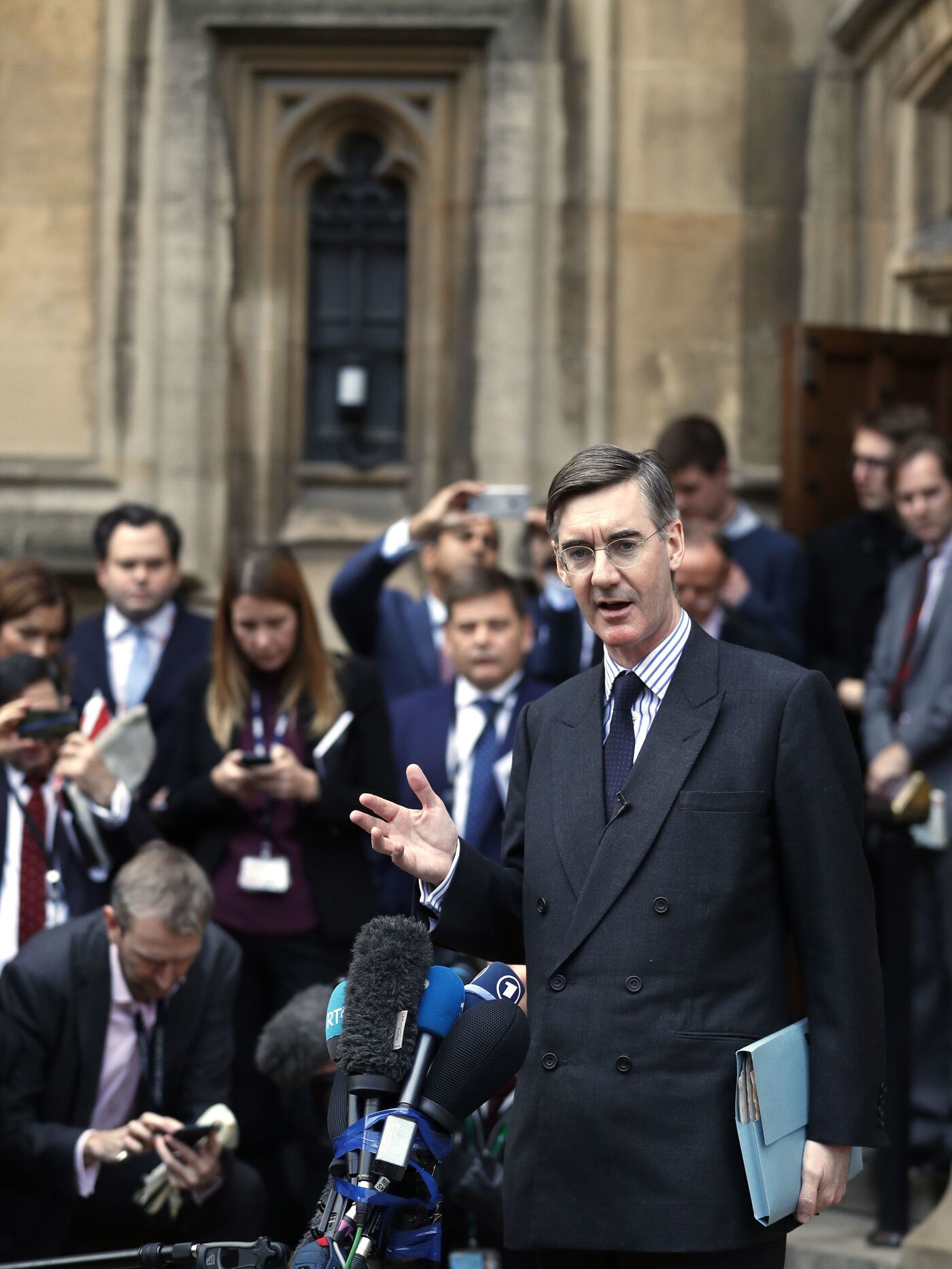 Jacob Rees-Mogg, leader of the hard-line pro-Brexit European Research Group, speaks to the media Thursday outside the Palace of Westminster. The Conservative lawmaker requested a vote of no-confidence in Prime Minister Theresa May.

Despite the collective backing of her Cabinet, several of her close allies made clear that they do not support the draft agreement. Among those to resign in protest were Work and Pensions Secretary Esther McVey and Brexit secretary Dominic Raab — the second Brexit secretary to quit in dramatic fashion this year. A handful of junior ministers have also joined them in bowing out.

Raab told the BBC that the deal May worked out contains too many provisions that would leave the U.K. subject to EU regulations "with no say over the rules and the laws being applied, with no exit mechanism."

"I think that would be damaging for the economy," he said, "but devastating for public trust in our democracy."

The political turmoil has already taken a noticeable economic toll, helping to send the British pound into a skid Thursday. At one point, the currency had tumbled more than 1 percent against the U.S. dollar following news of the high-level resignations. 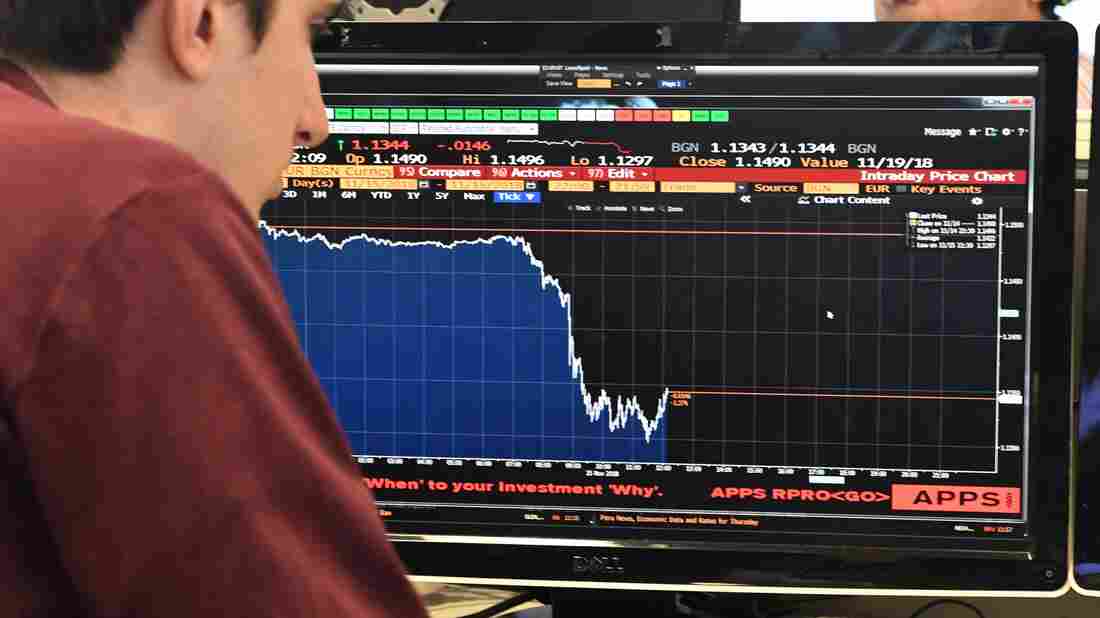 The British pound tumbles against the U.S. dollar Thursday, not long after a string of U.K. government resignations. Ben Fathers/AFP/Getty Images hide caption 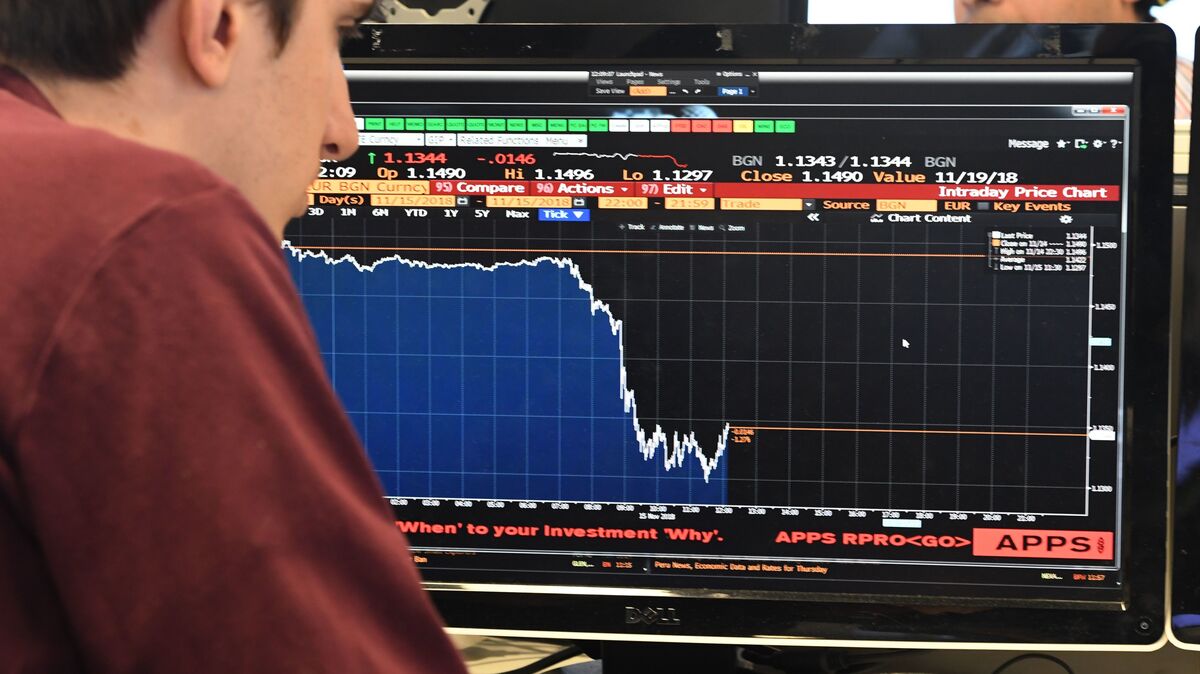 The British pound tumbles against the U.S. dollar Thursday, not long after a string of U.K. government resignations.

The tumult within the Conservative Party — many of whose members had campaigned for Brexit — has opened a window for political rivals still upset with the results of the 2016 referendum. Many of them have leaped at the opportunity to reassess the situation and retake the vote — now with the benefit of having seen the tumult of the first go-round.

"The only way in which she gets out of this with any dignity," Smith added, "is by going back to the people and holding another vote in order to determine whether they want this poor deal." 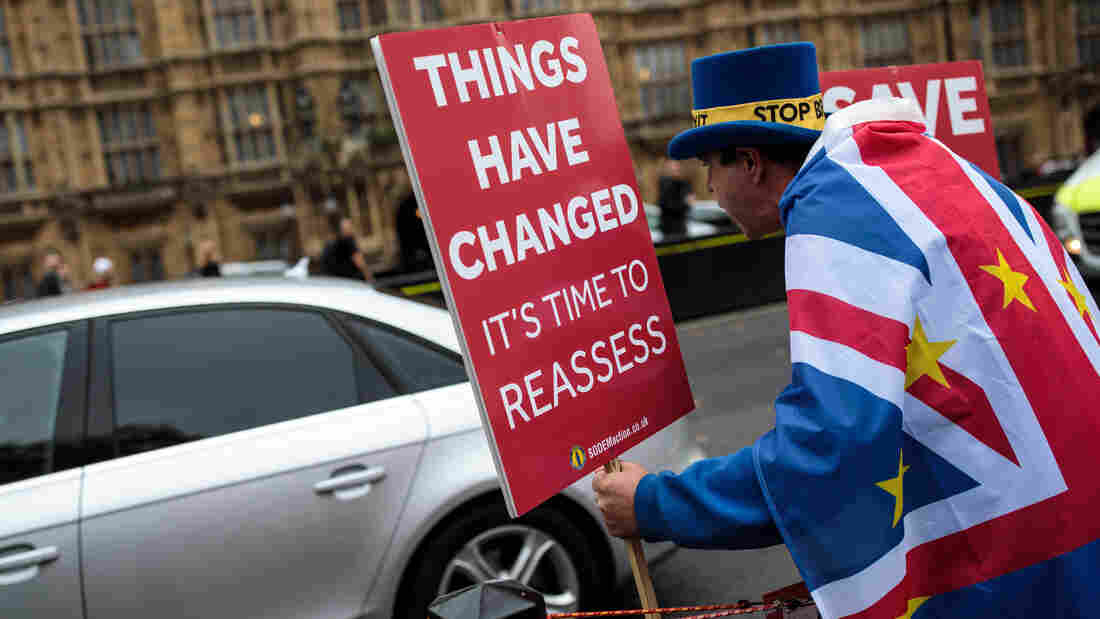 An anti-Brexit protester shouts at a car he believes to be carrying Nigel Farage, a principal Brexit campaigner, in London on Thursday. Jack Taylor/Getty Images hide caption 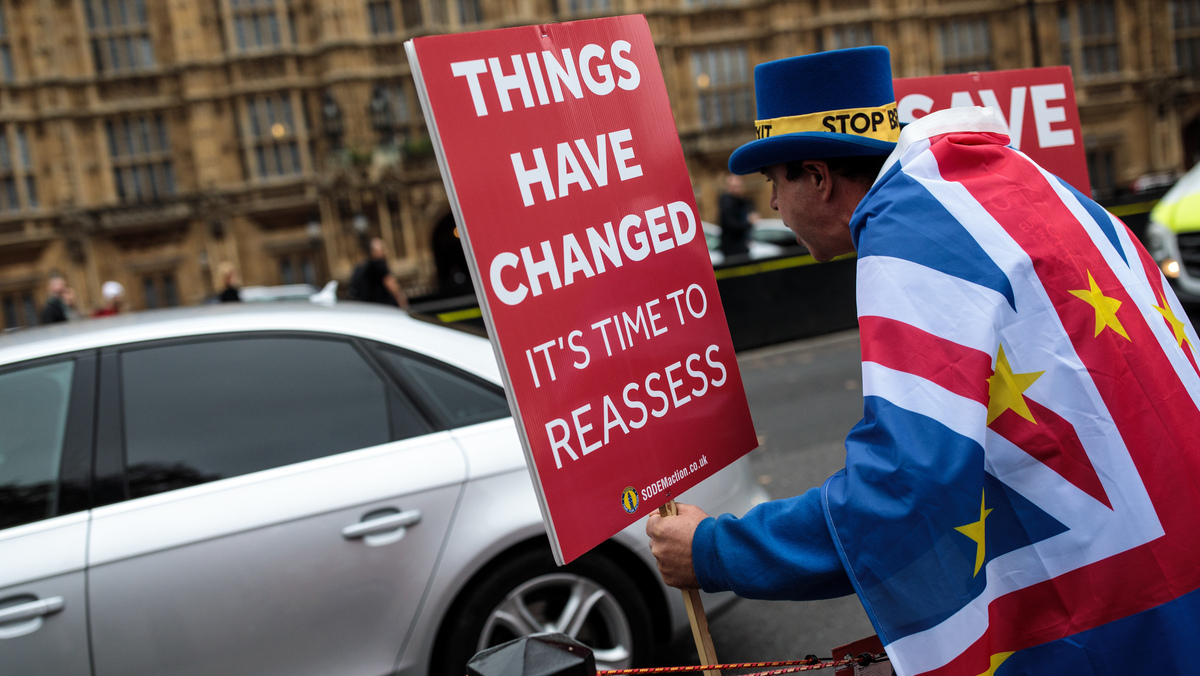 An anti-Brexit protester shouts at a car he believes to be carrying Nigel Farage, a principal Brexit campaigner, in London on Thursday.

The government in Scotland, where voters overwhelmingly cast ballots against Brexit, called the draft deal "essentially dead" in a statement Thursday.

"Brexit isn't a better future — it is a backward step into an imagined past," said Michael Russell, Scottish government business and constitutional relations secretary. "We must acknowledge that this deal is unacceptable to Scotland and her citizens. It therefore cannot be supported by this Government."

The first ministers of both Wales and Scotland, Carwyn Jones and Nicola Sturgeon, respectively, also submitted a letter Thursday requesting an urgent meeting to discuss the agreement next week.

"If this ends up with a leadership election in the [Conservative] Tory party, which just leads to a new prime minister who then carries on without any kind of mandate from the people, that would be completely wrong," Jones told the BBC.

"At that point, if there is no election, there has to be a referendum."

Initial polling appears to throw weight behind the deal's critics. At least one initial poll of British voters suggested that the number of people opposed to the deal more than double the number of supporters. Another poll found that a majority now prefer to stay in the EU altogether.

The British public does not back Theresa May's Brexit deal

42% of Leave voters oppose the deal, as do 47% of Remain votershttps://t.co/DLVwqFaB0x pic.twitter.com/Lch2F0ICgy

Asked Thursday about the possibility of another vote, May rejected the notion outright.

"Most members of Parliament recognize that they gave a vote to the British people. The British people voted, and it's up to us to deliver on that vote and not have a second referendum," she said at a news conference after addressing lawmakers.

Meanwhile, beyond the U.K.'s borders, reaction to the draft deal has been considerably more subdued. Ireland's prime minister, Leo Varadkar, said that while Brexit is "something we regret," the agreement reflects that May "has been true to her word" in honoring the terms of the 20-year-old peace deal known as the Good Friday Agreement.

European Council President Donald Tusk, too, offered what seemed backhanded words of support for the tentative deal on Thursday. "Since the very beginning, we've had no doubt that Brexit is a lose-lose situation and that our negotiations are only about damage control," he said in Brussels.

"As much as I am sad to see you leave," Tusk added, "I will do everything to make this farewell the least painful possible for both you and for us."

As for the political pain May is experiencing in the U.K., the prime minister had a simple answer: "Leadership is about taking the right decisions, not the easy ones."

"I believe that this is a deal which does deliver that which is in the national interest," May added. "And am I going to see this through? Yes."