Accessibility links
Jonathan Franzen Finds Hope In Nature In 'The End Of The End Of The Earth' A new collection the author's essays spans art, nature and autobiography — taking aim at people he meets in daily life but also exposing his own vulnerabilities. 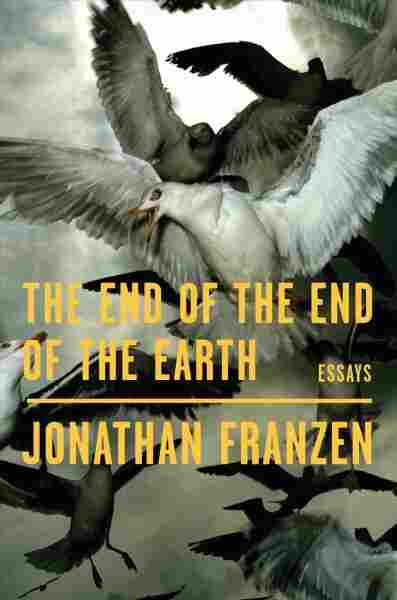 "If you could see every bird in the world, you'd see the whole world," writes Jonathan Franzen in The End of the End of the Earth. In the new collection of previously published essays — spanning art, nature and autobiography — he travels the world finding hope in things with feathers.

Humans, he seems less sure about. In fact, in the course of these melancholy and lovely essays he drops so many curdled little hints about the unacceptability of the people he runs into in his daily life I started to feel like it was almost personal: like it is just a matter of time before I meet Jonathan Franzen in a checkout line somewhere, and those few seconds will be all it takes to demonstrate my fundamental selfishness and vacuity.

Take, for instance, the kinds of people who talk about "bucket lists." Franzen, though he has lifetime goals, certainly, would never talk about a bucket list: He is "put off by the blatancy of its consumerism, the glibness of its realism...." And then there are the people who show up late to the airport and are rewarded for their lateness by being sent to the front of the line by complicit airline attendants. And then there are the people who go on nature cruises and spend all their time taking pictures and not appreciating nature! Not to even mention the people who like the wrong kinds of books.

Jonathan Franzen likes the novels of Edith Wharton, and, in a gesture of defiance, he has included here his controversial essay about her, which was criticized when it came out because of they way it incorporated her looks into his interpretation of her work. Of The House of Mirth, he writes, "The novel can be imagined as a sustained effort by Wharton to imagine beauty from the inside and achieve sympathy for it, or, conversely, as a sadistically slow and thorough punishment of the pretty girl she couldn't be." Critics found his view sexist, and that might be fair, but perhaps more importantly, it seems like a dull reading of a radiant novel.

At one point in these essays, he concedes that he sometimes comes across as "an angry bird-loving misfit who thinks he's smarter than the crowd..." This is correct. But the other piece of that description, the part about love, is also present, and it's what makes this collection worth reading.

Birds, he writes, "do the the thing we all wish we could do but can't, except in dreams: They fly. Eagles effortlessly ride thermals; hummingbirds pause in midair; quail burst into flight heart-stoppingly. Taken in sum, the flight paths of birds bind the planet together like a hundred billion filaments, tree to tree and continent to continent. There was never a time the world seemed large to them."

And though he derides (typically) the need to compare animals to people as "embarrassingly self-infatuated," he does write about them in movingly human terms: Male ostriches in their courtship rituals dance "like a very drunk male wedding guest." Ground Hornbills have "eyes so expressive they could almost be human." A penguin before a group of photographers "appeared to be holding a press conference . . . in a posture of calm dignity."

The further you get into the collection, the more the unpleasantness about other people comes to feel like a surface-level defensive instinct rather than actual vitriol. One of the collection's best pieces is an art essay about Sarah Stolfa's photography book The Regulars, which is made up of portraits of regulars at a Philadelphia bar she worked at. He disliked the pictures when he first saw them because they reminded him of his some of his own failures, and the essay turns into a gentle and moving consideration of loneliness. In bars, he writes, "I become miserable with self-consciousness and thrift and shame and shyness and etiquette anxiety, unless I'm with a group. The result is that I can't look at the regulars without envy and longing — a wish to be one of the Regulars myself." (Franzen wrote the introduction to the book.)

This vulnerability makes it suddenly easy to read him less like a prestigious author being arbitrarily cruel about strangers — and more like he sees himself, someone disappointed and hopeful and heartbroken about all of the ways that we treat the earth and each other.

"I suspect that sympathy, or its absence, is involved in almost every reader's literary judgments," he writes in his essay about Edith Wharton. This collection becomes beautiful when he finally gives us permission to care about him.