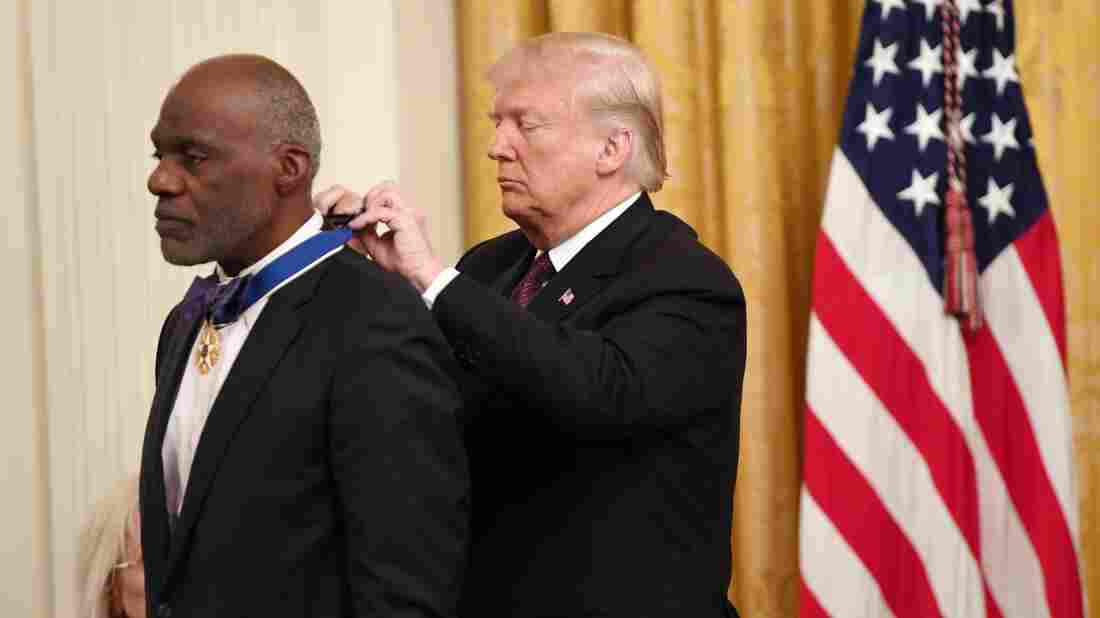 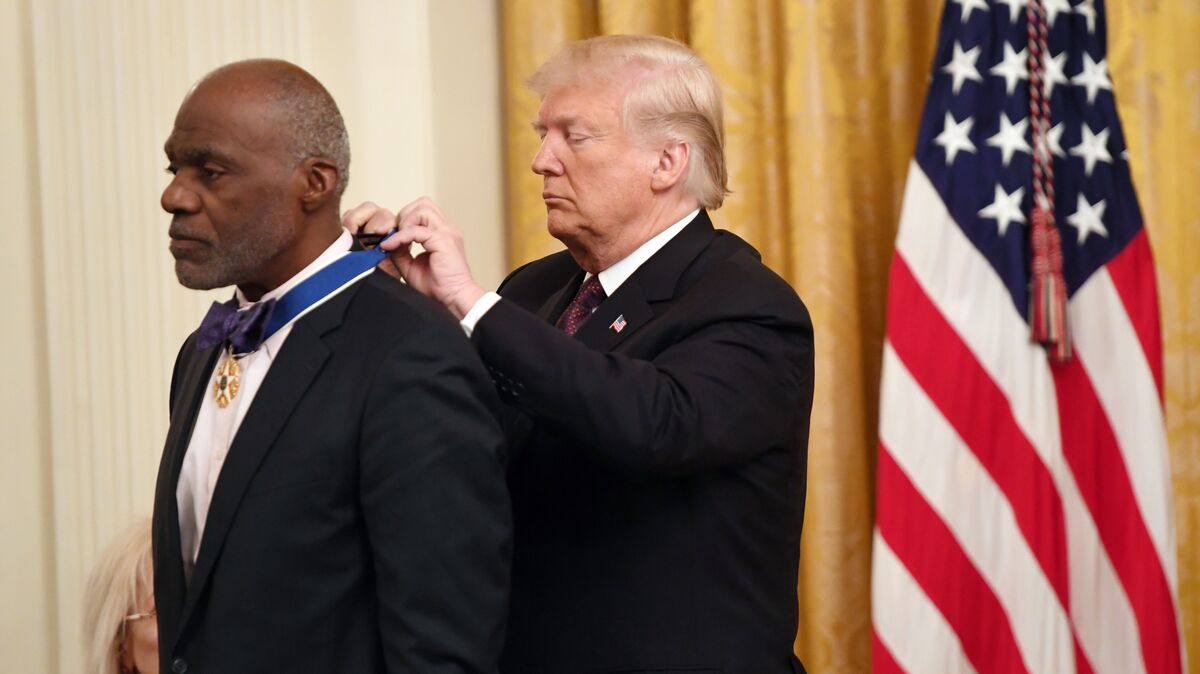 President Trump awards the Presidential Medal of Freedom to American Football hall-of-famer Alan Page at the White House on Friday.

A king, a senator and the "Sultan of Swat" were honored at the White House on Friday.

The president highlighted Ruth's legendary baseball prowess, his contributions to orphanages and other charities, and his colorful off-field antics.

He "raised money and raised hell," Trump said of Ruth, who died 70 years ago. "Maybe that's why it's taken him a long time to get this award. This award should have been given to him a long time ago. I said, 'You mean Babe Ruth hasn't gotten it?' We took care of that real fast."

Trump Says He Has Completed Written Answers For Mueller, But Not Turned Them In

"The fans were ripping the place apart, screaming," he recalled. "They were going crazy. And they announced, 'Elvis has left the house.' If they didn't say that, I think I'd still be there."

Honoring Presley and Ruth might signal Trump's nostalgic yearning for America as it was in the last century. They're also safe picks for a president whose invitations have at times been spurned by more contemporary artists and athletes.

"Those who are deceased can't really object," said Fletcher McClellan, a political scientist at Elizabethtown College in Pennsylvania.

He and several colleagues have cataloged all 500-plus Medals of Freedom that have been issued since the award was established by John F. Kennedy. They see the medals as a source of insight because, while honorees are suggested by a variety of people, the president has total discretion to pick the recipients.

"This is a fascinating way to find out what is important to a president," McClellan said. "In President Trump's case, we get to learn more about what 'Make America Great' means to him."

While less than 10 percent of previous Medals of Freedom were presented posthumously, more than 40 percent of Trump's fall into that category.

Some of Trump's picks are unsurprising. He'll recognize the late Supreme Court Justice Antonin Scalia as well as Sen. Orrin Hatch, R-Utah, who's retiring after 41 years.

Orrin Hatch Would Like You To Know He's Still Alive

Trump is the first president to extend the honor to a couple of professional football stars, Roger Staubach and Alan Page.

McClellan said Staubach is an easy choice, since he attended the Naval Academy, won the Heisman Trophy and played for the Dallas Cowboys.

Trump fondly recalled partnering with Staubach on the golf course.

"We were in deep trouble," Trump said. "He was so deep in the weeds that you wouldn't believe it. And we desperately needed a par on the 18th hole to win. And he came out and hit his shot. I don't know how it happened. But he was this far from the hole. We got our par. We won. And I said, 'That's Roger Staubach.' "

Page had a Hall of Fame career with the Minnesota Vikings and Chicago Bears and then went on to serve more than 20 years as a justice on the Minnesota Supreme Court.

During his playing days, Page was active with the players' union. And more recently, he has defended NFL players who protest police brutality by taking a knee during the national anthem.

"What Paul Robeson said was, 'The answer to injustice is not to silence the critic. It is to end the injustice,' " Page told WCCO-TV in January.

Trump, who has criticized players who kneel during the anthem, made no mention of that during the awards ceremony. Instead, he focused on Page's stellar football and legal careers as well as the educational foundation he started.

"Alan and his wife Diane founded the Page Education Foundation, which has provided nearly 7,000 scholarships to civic-minded students," Trump said.

Researchers have found some predictable patterns in past Medal of Freedom honorees. Republican presidents tend to recognize more military figures, while Democrats are more likely to honor labor and civil rights leaders. One surprise, McClellan said, is that Republican presidents have awarded more medals to journalists.

"That was a puzzler, and we still haven't figured that out," he said.

No journalists made Trump's list of honorees. The president's final pick for the Medal of Freedom this year is Miriam Adelson, who is described by the White House as a "committed doctor, philanthropist, and humanitarian." She's also a GOP megadonor, along with her husband, the billionaire casino magnate Sheldon Adelson.

"This is a power couple that really cuts a path in U.S. politics and has been a major benefactor to the Republican Party for many years," said Sheila Krumholz, executive director of the Center for Responsive Politics, which tracks campaign contributions.

The Adelsons contributed $113 million to Republican and conservative campaigns during the 2018 election cycle alone.

Financial supporters have been honored with medals in the past, though usually not so close to an election. Sheldon Adelson was at the White House last week for a midterm election watch party. The Medal of Freedom honorees were announced just four days later.