Accessibility links
More Than 1,000 People Now Listed As Missing In California's Deadliest Fire The people missing in Northern California's Camp Fire could be listed more than once, warns the sheriff, as calls and emails come in from friends and relatives. Seventy-one are known to have died. 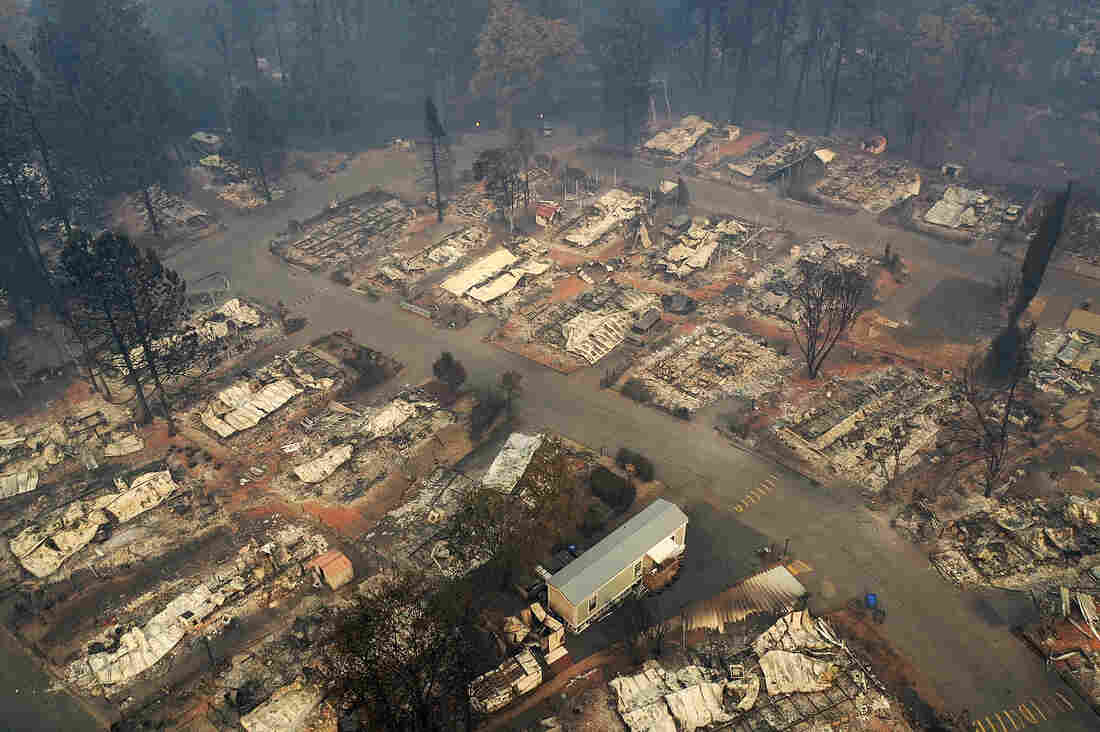 An aerial view of a neighborhood destroyed by the Camp Fire in Paradise, Calif. Fueled by high winds and low humidity, the wildfire ripped through the town, charring more than 140,000 acres and killing more than 70 people. Justin Sullivan/Getty Images hide caption 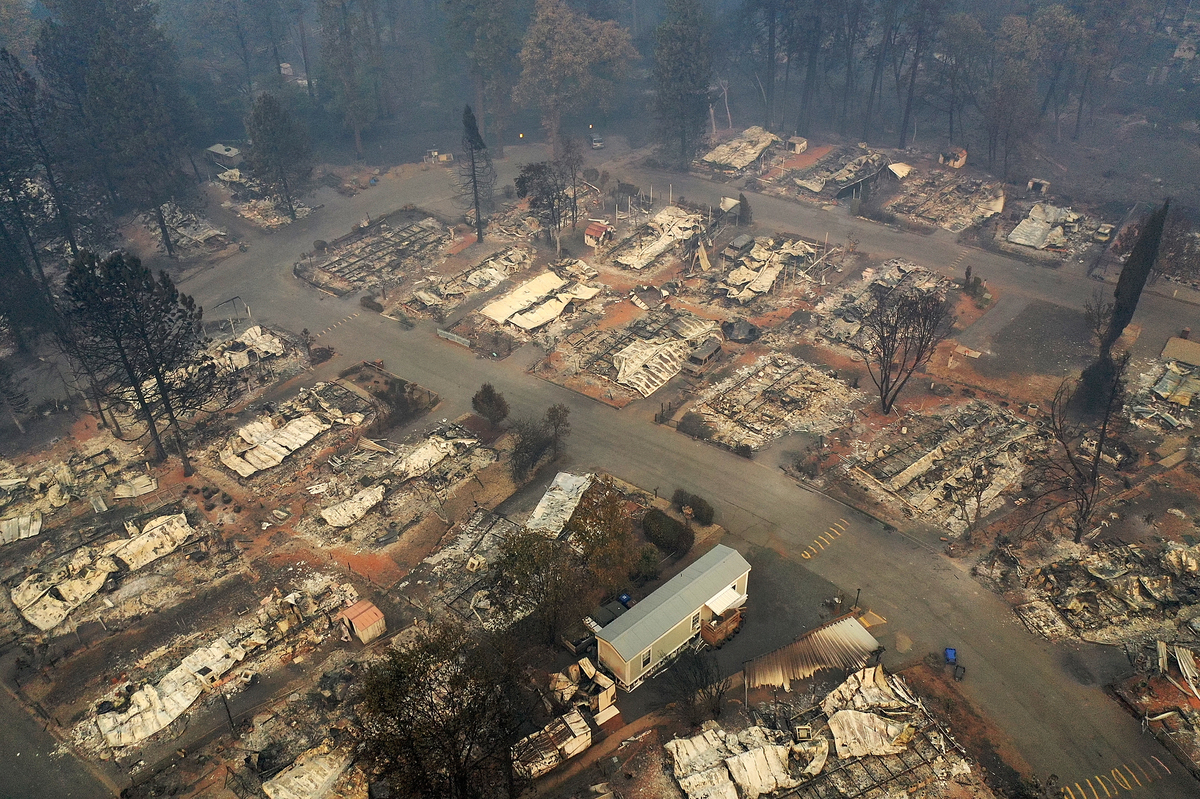 An aerial view of a neighborhood destroyed by the Camp Fire in Paradise, Calif. Fueled by high winds and low humidity, the wildfire ripped through the town, charring more than 140,000 acres and killing more than 70 people.

More than 1,000 people are listed as missing in the wake of the Northern California wildfire known as the Camp Fire, authorities say. It's a number that has ballooned rapidly and is expected to continue to fluctuate. The Butte County Sheriff's Office had said on Thursday evening there were 631 people unaccounted for.

However, that number may include people who escaped to safety and do not realize they are being searched for.

After The Fire, The Town Of Paradise Lies In An Ashy Quiet

The death toll also rose after eight sets of remains were discovered on Friday. At least 71 people have died in the fire, which has burned through more than 220 square miles of land and consumed the town of Paradise.

The fire is the deadliest, and the most destructive, in California history. Nearly 10,000 homes have been destroyed.

No official cause for the fire has been identified; the blaze is currently 50 percent contained. 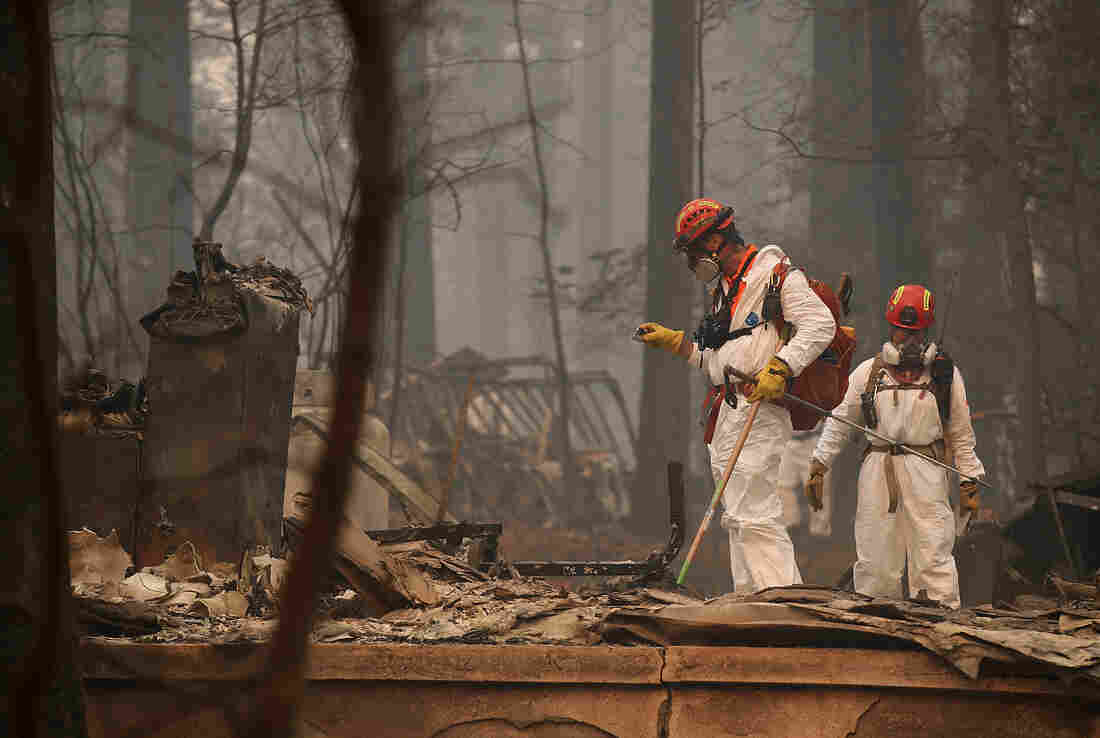 Rescue workers search for human remains on Thursday at a home that was burned by the Camp Fire in Paradise, Calif. Justin Sullivan/Getty Images hide caption 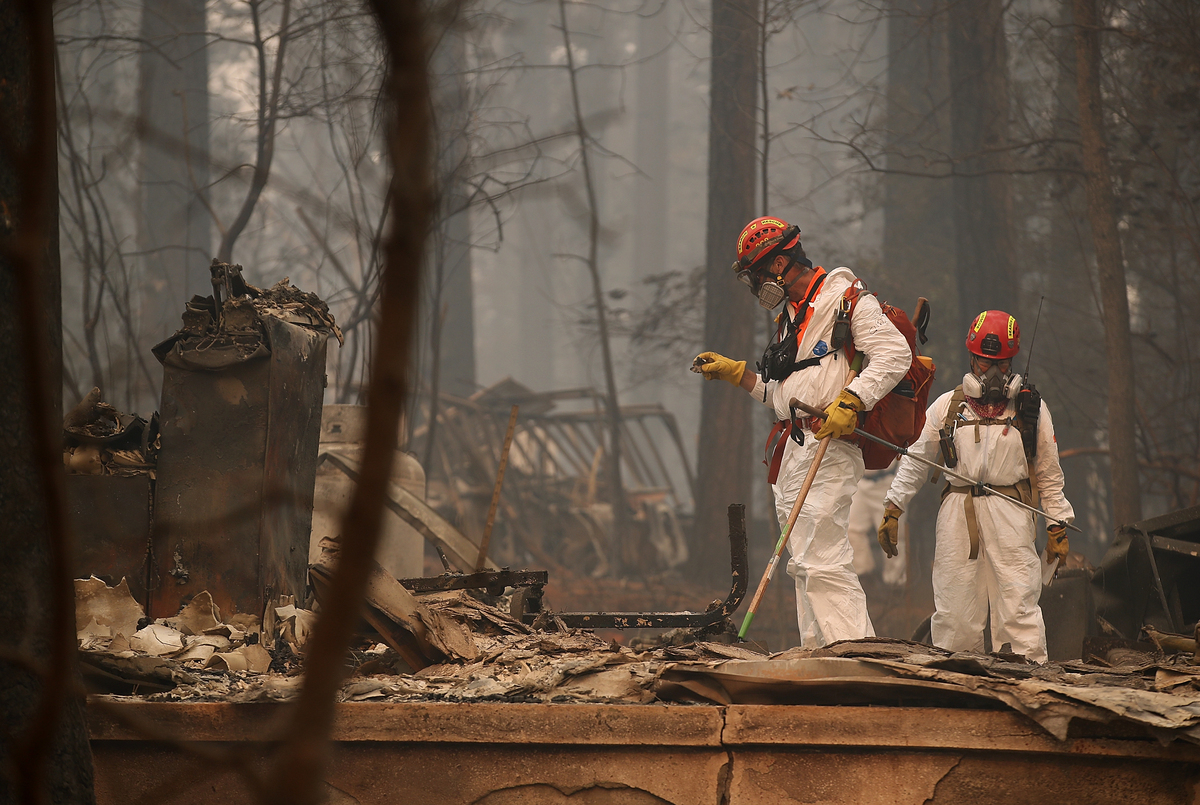 Rescue workers search for human remains on Thursday at a home that was burned by the Camp Fire in Paradise, Calif.

Officials are concerned about a projected increase in wind gusts between Saturday night and Sunday afternoon that could aggravate the fire. But forecasters also say there is a possibility of much needed rain arriving perhaps by Wednesday or Thursday of next week.

Butte County Sheriff Kory Honea told reporters at a news conference Friday evening that the list of missing people ballooned as a result of staff going back through calls that came in during the beginning of the fire emergency, and more members of the the public phoning and emailing his office about people they haven't heard from.

Do You Know Someone Missing As The Camp Fire Burns?

"This is a dynamic list. It will fluctuate both up and down every day, said the sheriff.

Honea has said that when the blaze erupted one week ago, "the chaos we were dealing with was extraordinary," which slowed the process.

Many of the missing are elderly, according to the list released by county officials. A number of them are in their late 80s and 90s.

Reuters notes that Paradise had long been described by real estate agents as a perfect place for retirement. The news service reports:

"Relatives of retired U.S. Navy veteran David Marbury, 66, are waiting to hear from him. No one has managed to speak with him since the wildfire began, and relatives' phone calls have gone directly to his voicemail.

"On Thursday, Marbury's landlord confirmed to relatives that his duplex in Paradise had burned down. Sheriff's officials told them his car was still in the garage.

" 'I really hope he's still alive and we're going to be able to see him,' Marbury's niece Sadia Quint, 30, told Reuters by phone. ' We just hope that he's still with us.' "

In a strange tangent to the ongoing search for victims of the fire, officials announced that law enforcement officers on Thursday had shot and killed a fugitive in a staging area used for fire operations.

Butte County District Attorney Michael Ramsey told reporters at the news conference that the man had been sought by authorities since July. The man was pointed out by a civilian, Ramsey said; officers confronted him, followed him in a high-speed car chase, and then stopped him by using spike strips that flattened the tires on his sedan.

The man removed his hand from his right pocket and pointed a metallic object at the officers, Ramsey said. Six officers opened fire, and the man was pronounced dead at the scene. A police dog was killed by friendly fire, and a dog that the man had in his car, which had attacked the police dog, was shot and killed, as well.

Friday evening Honea said the investigation is ongoing and that DA Ramsey is reviewing dashcam video of the incident.

"What is depicted on the video is consistent with the statements of all of the parties involved," he said.