Accessibility links
'Authenticity Is My Rebellion': Viola Davis On 'Widows,' Steve McQueen And Legacy The only black woman to have won an Emmy, a Tony and an Oscar for acting stars as a grieving wife turned professional criminal in a new heist thriller. "I approached her like a real woman," she says. 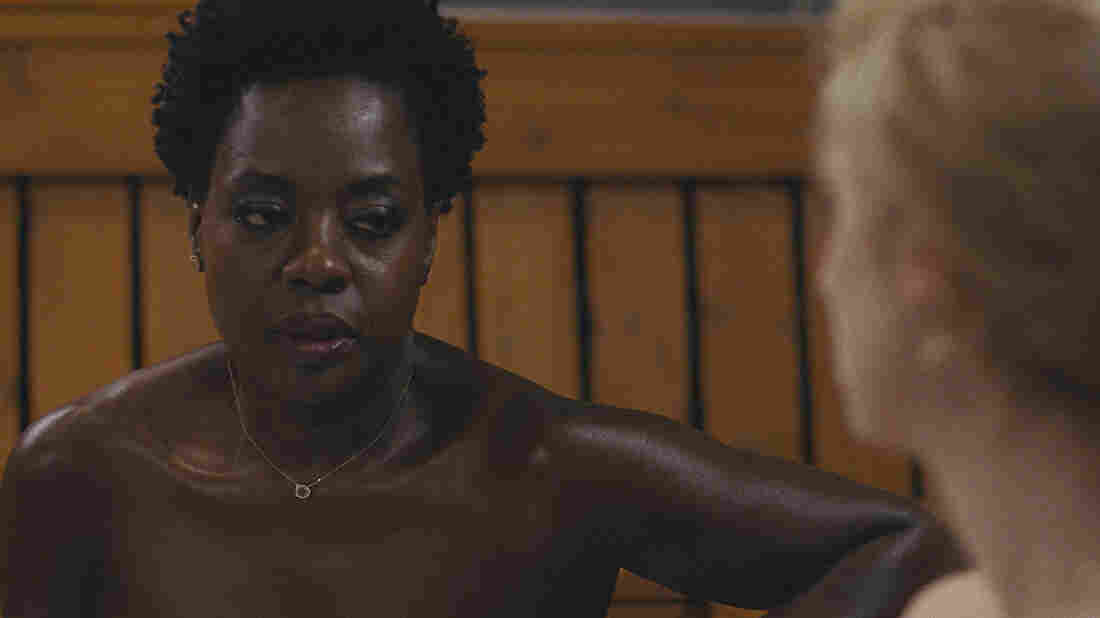 In Widows, Viola Davis turns to a life of crime after her husband dies in a botched bank robbery. Twentieth Century Fox hide caption 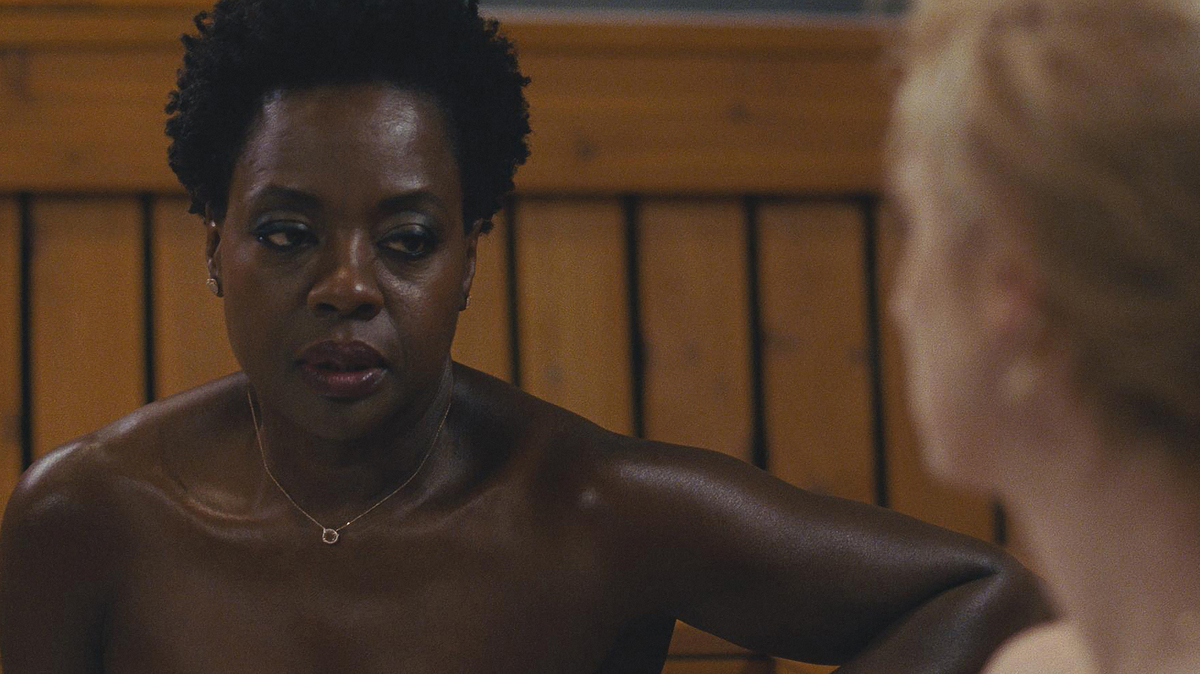 In Widows, Viola Davis turns to a life of crime after her husband dies in a botched bank robbery.

A Heist, And A Whole Lot More, As Viola Davis Delivers In 'Widows'

The new film Widows is an action-packed heist thriller — with a major twist.

Masked men break into a Chicago vault. Very quickly, it goes very wrong. Within the first few minutes of the movie, the men are dead. Their wives — now widows — are left to finish the job.

Widows is the new film from Steve McQueen, the Oscar-winning director of 12 Years a Slave. It features a huge ensemble of actors, but at the center of the movie is the lead widow Veronica, played by Viola Davis. When we reached him earlier, McQueen certainly had high praise for his movie's star actress:

Viola is almost like an iceberg. You know, there's a gravitas. You see something. I mean, her even turning the handle of a door — there's weight in that, there's purpose in that. So she just makes the ordinary extraordinary. So once — as an audience we look at her, we can identify with her because we see something in her which we see in ourselves. Now that doesn't happen with every actor — only the greats. And often you think, "Hmmm, actors, what's an actor?" An actor, a great actor, can translate humanity, and show us ourselves raw, bare, naked. And that's what she does.

Davis is one of the few to have earned the rare triple crown of acting prizes — the Emmy, the Tony (two of them) and the Academy Award — and the only black actor to have done so. She now has her own production company called JuVee.

Earlier this week I spoke with Viola Davis in front of a live audience in New York City. Our full conversation can be heard by clicking the link at the top of this page.

On approaching her role in Widows

The biggest issue I have with heist films is: Who would go to any act of criminality after they come from a seemingly normal life? Who just goes out and commits a crime? So I needed to answer the question "why." And so how I had to approach it is — the character, when you meet her, has suffered a tremendous loss, tremendous, where ... she now has nothing. Economically she has nothing. Emotionally she has nothing. ...

Which I believe that that's what sort of catapults us into criminality a lot of times. I mean, yeah, I know that some people probably really like it. You know, it gives them some thrills. But I feel that, as [co-star] Michelle Rodriguez says so beautifully, economic subterfuge — you know, feeling like you have no choice, feeling desperate having to put food on the table, having to pay your rent ... it's a Sophie's choice. So that's what I had to work on this. She has no choice.

She's threatened with her life — and her dog's life. And she's lost her son, she's lost her husband. She has no idea how she's going to pay her bills. She is sinking under the weight of depression. And this act of criminality — it's almost like a metaphor for her to take ownership of her life. But at the same time it's a way to pay that rent; it's a way to survive. That's how I approached it. 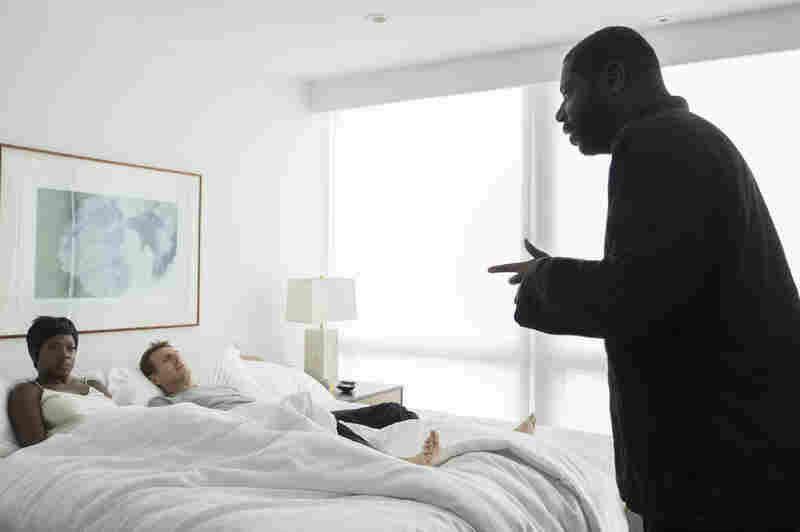 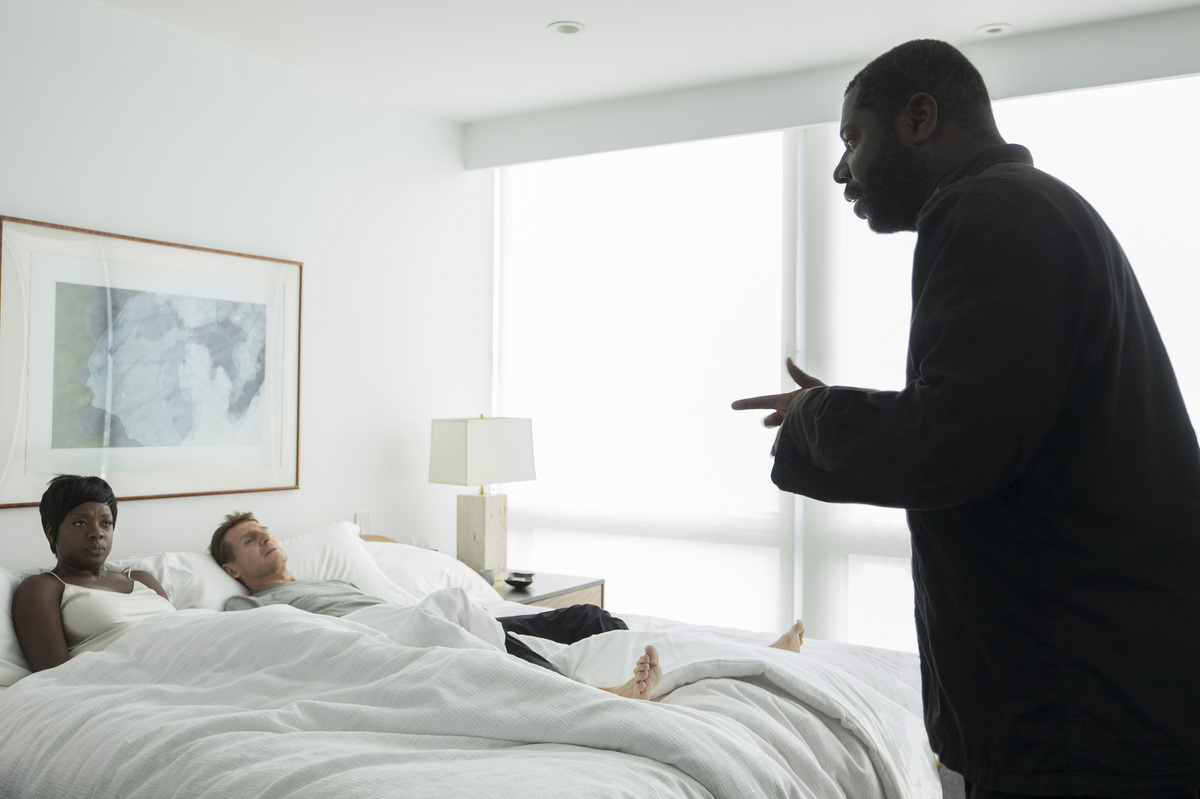 If I approach any role like how Hollywood would want to look at it, like: "OK, I know what the demographic of the audience is going to want. They're going to want this babe next to Liam Neeson, and she's got to be light and funny." I'm not the actress for that. I really am not — I'm not the go-to actress for that. But Steve McQueen definitely wanted to approach it realistically, which — I hate saying that because that's how you're supposed to approach a work anyway, realistically. It's just that we've been saturated by fast food so much with filmmaking that we actually believe that that is the truth. But that's how we approached it. I approached her like a real woman.

On how working with Steve McQueen was different

To digress a little bit, most of the time you don't have a choice. You just don't. I mean, most people don't understand what it is that we do. They just don't. You know, a lot of people [who] want to be actors say, "OK, I'm not going to be typecast. I'm not going to let Hollywood put me in a box." It's like, "OK, you have to get a job first." And getting that job is the equivalent of winning the Powerball. ...

Directors have power. Hollywood has power. People who have the greenlight vote have power. It is a business that, until you're on my level — and even at my level — your power and your choices are limited. That's just the truth. If anyone says anything else, they're lying to you. It's like, we tell people b******t because we want to build ourselves up, and we get off on you kind of standing up when I come to the stage. So I'll say what you want to hear, so you could keep adoring me. But really, as much as I do I appreciate the adoration, I'm not going to sell you a bill of goods. It is a business about money. It's like Denzel says: It [show business] should be called business show.

And that leads me to Steve McQueen, because he is a director that sees you. And most people — I always say that if I were not a celebrity, I would be invisible. It's a larger question about how black women are treated, how our femininity and beauty is appreciated, our mess, our complexity ... We get together; we out-strong each other, you know. It's like, "Girl I would never let this man beat my ass, and I would never let him do that." And it's like, "Listen, I know you're with a man that's treating you like crap. C'mon."

But that's because we haven't felt supported. And we have never felt adored. I felt that adoration from Steve McQueen. I felt that he saw all the things everyone else sees. I mean, I have a deep voice. I'm not a size 2. You know, people feel like I'm take-charge — that's how I come off. You know, I'm a leader. All of those things, that's how people see me. But then he sees my shyness. He sees the part of me that is very feminine and fragile. 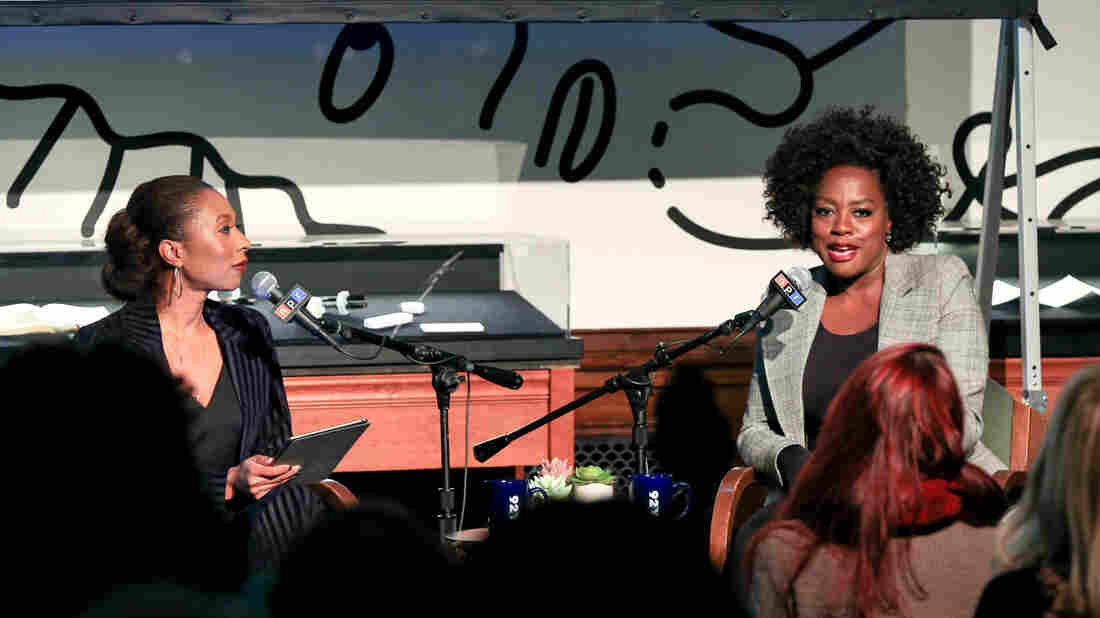 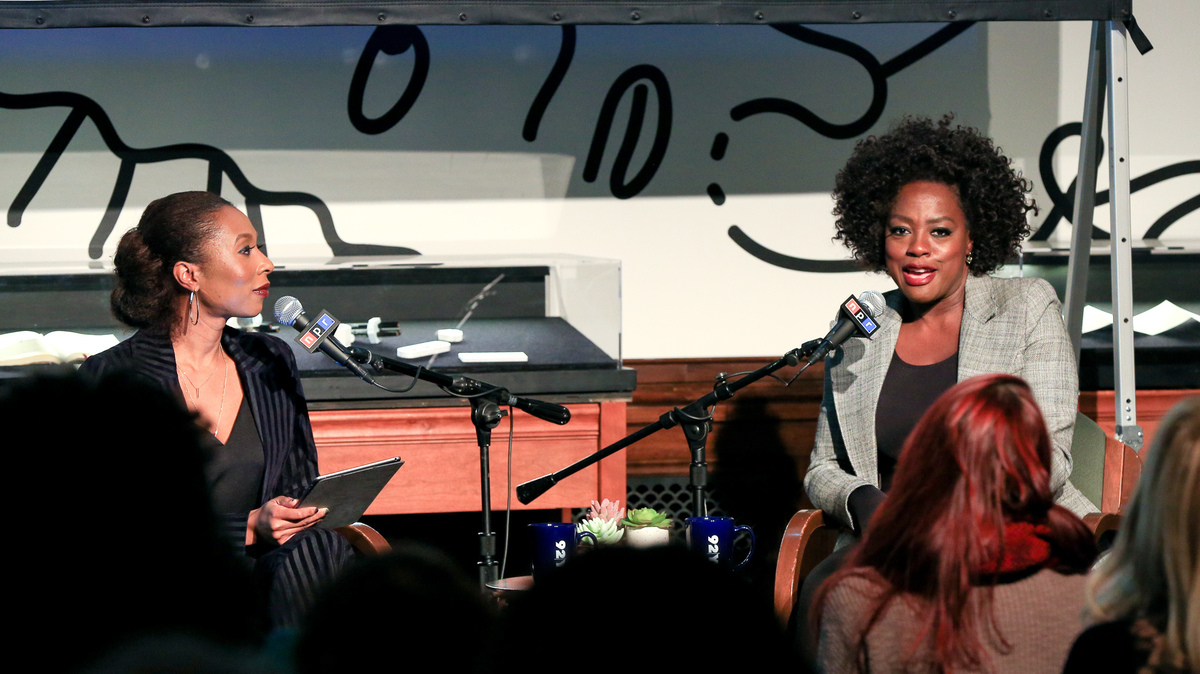 Viola Davis spoke with NPR's Audie Cornish at the 92Y in New York, N.Y. as part of the NPR Presents series of on-stage interviews with creative people.

On how playing a role "costs" her something

Yeah. It takes a chunk out of your soul. It should. I think if it's not costing you anything you're not doing it right. My job is to create a human being. My job is as an observer and a thief. That I look at life everyday, people may be walking by someone every day on the train, on the streets, and not notice little details. As an artist, you notice everything. You notice how people look when they're falling in love. You notice that little blink in someone's eye when they're thinking about what they're going to eat. The time their parent died, to feeling like life is hopeless. And within two seconds — because that's how we think as people. You notice those things. And what we do as artists is to create human beings so people can feel less alone. That's what you're supposed to do.

The audience is a part of the collaboration process. I can't be an actor in my room. I can't. I need the director, I need the script, all of those artists working to create the whole. But the other part that I need is the audience to come locked and loaded with all their thoughts, with all their memories, and to be able to look at the person that I'm creating on the stage and see themselves. Not a fantasy of themselves, not an extension, but themselves. So that's what I do. That's what sort of turns me on about what I do. And it is the most awesome way to feel empathy for another human being — to literally sit with them and to see them in their mess and their beauty.

On what success means to her now

How I think of it: You know, it's like you spend your whole life wanting to climb Mount Everest and then you get to the top and then you say, "And now what?" Most people I know who are on the top are not as happy as you would like to believe. And it's not like they don't have fulfilling personal lives or whatever – it's just that they're disillusioned. Because the No. 1 thing that people feel is that you live to get to that ultimate level of success, and once you reach it, you've got the sweet elixir — you've gotten the answer, and you have it. You crumble because you haven't thought of significance. Significance is something completely different. It's: What are you going to do with your dash of time that you have on the earth, because we all have an expiration date? ... What legacy are you going to leave on the earth? ...

My definition of success is legacy, is significance. And also, might I add, my authenticity is my rebellion. It's my F.U., per se. It helps when I think of it like that. That's why I give these speeches; that's why I say what I say. And it's also my narcissism, because I feel that that's probably what sets me apart from most people. But all those things are in my idea of success. If I can go to my grave feeling like — you know, it's like Lorraine Toussaint said. She said the reason why she adopted her child is because she didn't want "series regular" to be on her tombstone. And yeah, I want something quite beautiful, like Shirley Chisholm — you know, on her tombstone is "Unbought and Unbossed."