Accessibility links
Here's What You Need To Know About Brexit After A Tumultuous Week In The U.K. After more than a year of negotiations, Prime Minister Theresa May presented a Brexit withdrawal agreement that seemed to unite British politicians across the spectrum in their hatred for it. 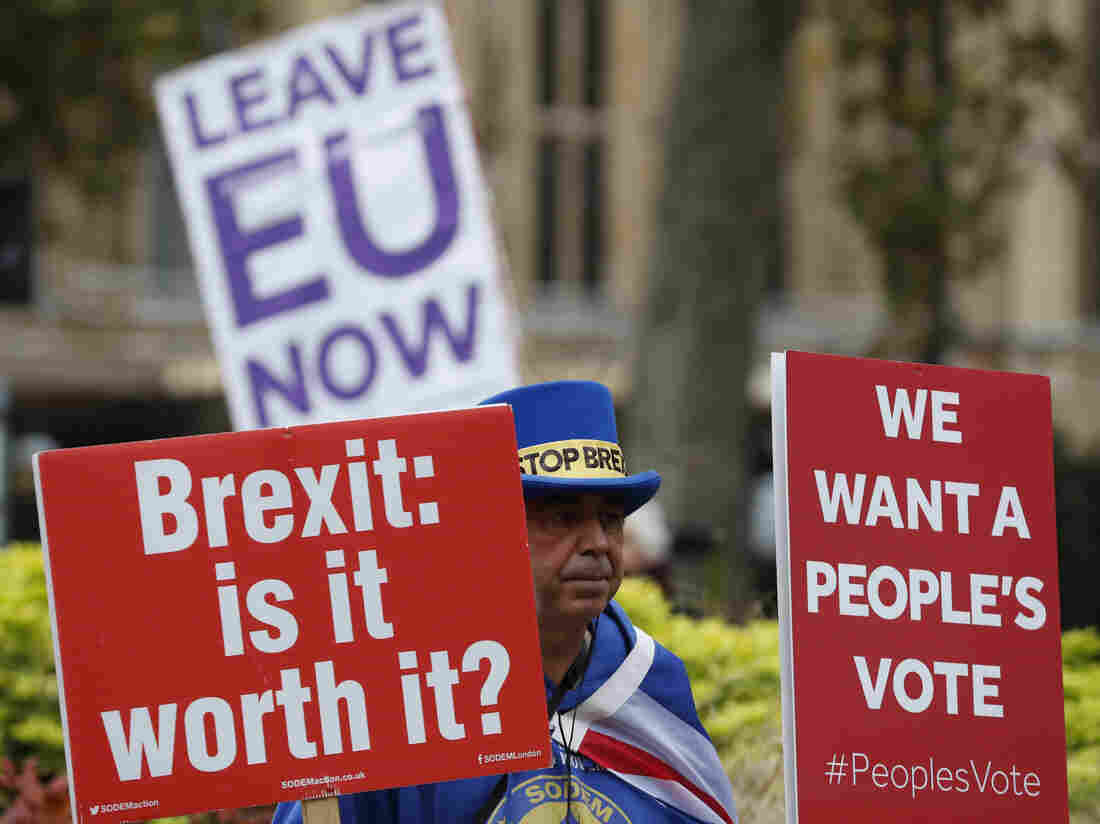 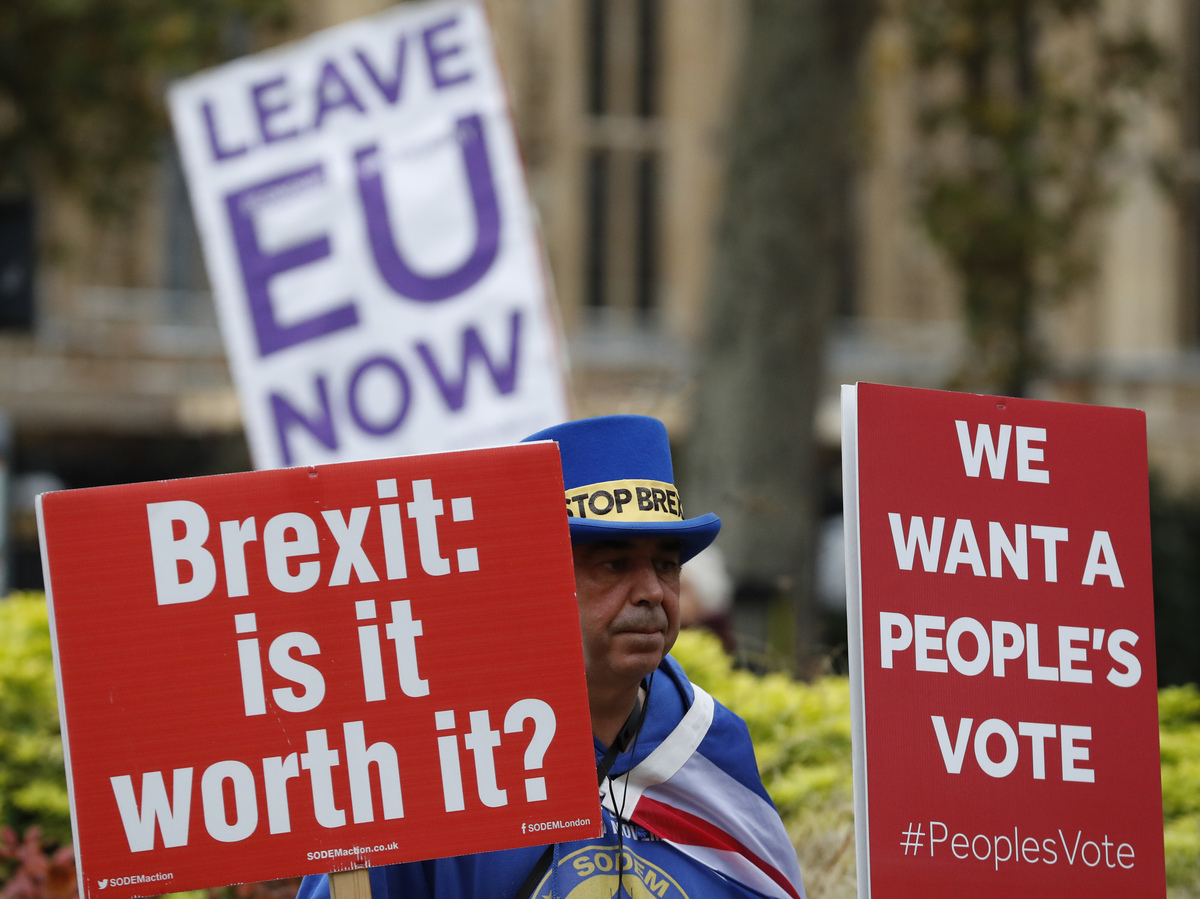 This week was one of the most chaotic in British politics in recent decades. After more than a year of negotiations, Prime Minister Theresa May presented a Brexit withdrawal agreement from the European Union that seemed to unite British politicians across the spectrum in their hatred for it.

The tentative deal triggered the resignation of two of May's cabinet secretaries — including Dominic Raab, her Brexit secretary who helped negotiate it — as well as letters from members of parliament in her own Conservative party calling for a vote of no confidence in her leadership.

Five remaining Brexiteer cabinet members are now reportedly pressuring May to go back to the EU to demand changes before a planned special summit in Brussels on Nov. 25, when the 27 member states of the EU are to vote on the deal. The situation, as the British like to say, is a "shambles."

1. What is the key dispute in this Brexit draft deal?

The draft agreement covers everything from winding down police cooperation to the U.K. paying a $50 billion divorce bill. The biggest sticking point, however, has been how to avoid building new customs posts on the island of Ireland. Northern Ireland, which is part of the U.K., and the Republic of Ireland are both still inside the EU's single market, so there's no need for barriers along the more-than-300-mile border.

After the U.K. leaves the European Union, Northern Ireland and the Republic of Ireland will be in two separate economies, requiring customs monitoring. No one has come up with a credible way to avoid a border, so the U.K. has agreed to stay inside the EU's customs area, continuing to follow EU regulations and laws, until they can figure out a solution or work out a new free trade agreement.

2. Why's everybody so angry about this?

Brexiteers hate the agreement because they fear the United Kingdom will become trapped inside the EU for years, subject to EU regulations and laws over which the U.K. will no longer have any influence. They are also concerned this will make it harder to strike new trade deals with other major economies such as the United States. Jacob Rees-Mogg, an arch Brexiteer, said the deal would turn the U.K. into a "slave state."

Jeremy Corbyn, leader of the opposition Labour Party who hopes to succeed May, also attacked the deal for not setting a date for when the U.K. can leave the EU customs area or allowing it to do so unilaterally.

"The government is in chaos," Corbyn said earlier this week. "Their deal risks leaving the country in an indefinite half-way house without a real say."

3. Why are commentators saying this might be the end for Prime Minister Theresa May?

May has struggled politically since June, 2017, when she managed to lose her party's majority in parliament by calling an election that was not necessary. Brexiteers in her own party blame her for the withdrawal agreement, saying she has reneged on her promise that "Brexit means Brexit" and isn't following through on the results of the 2016 referendum. Earlier this week, the prime minister faced an onslaught of criticism in the House of Commons, suggesting she has a slim chance of getting the agreement through parliament in December. She also faces the genuine risk of a no confidence vote.

4. But what if May wins this fight?

That would be remarkable, though not unthinkable. Right now she's stuck between Brexiteers in her party and the European Union, which doesn't seem in the mood to go back to the bargaining table.

"All the signs out of Europe are this has taken ages to do, it's been a really hard grind to get to where we are and the appetite for reopening is pretty limited," Jill Rutter, who studies Brexit at the Institute for Government, a London think tank, told NPR.

In fairness to the prime minister, getting a withdrawal agreement that would ensure no hard border on the island of Ireland, satisfy the EU and make parliament happy would be, at best, extraordinarily difficult. If she were somehow able to pull it off, her image would almost certainly change. The public and political class would see her less as a beleaguered leader on her last legs and more as a dogged, determined public servant who got the job done against the odds.

5. Is following this draft agreement any better than staying in the EU?

Many say the conditions under the draft agreement are worse. When politicians argued for Brexit, they insisted the U.K. would take back control of its laws and regulations from Brussels. Under the withdrawal agreement, the U.K. remains in the customs area for who knows how long — free trade deals can take years — while giving up its power as an EU member to shape the rules under which the European Union operates.

6. Why does this all ultimately matter — why should anybody outside Britain care?

A disorderly Brexit undermines the cohesion of the European Union, which was set up to create prosperity and ensure peace after two world wars. The United Kingdom is America's closest political ally. The countries are democracies, share a common language and their soldiers have fought side by side in Europe and Afghanistan. A key ally in political chaos is not helpful for the United States as it grapples with an increasingly challenging global landscape that includes a resurgent Russia and an increasingly assertive China.

Sam Alwyine-Mosely contributed to this report.