Accessibility links
California Offers Safe Space For Firefighters To Work Through Stress And Trauma Now that wildfires are a year-round problem in California, officials are adding emotional support to the services they provide to firefighters in the field.

Listen · 3:54 3:54
California Offers Safe Space For Firefighters To Work Through Stress And Trauma 3:54 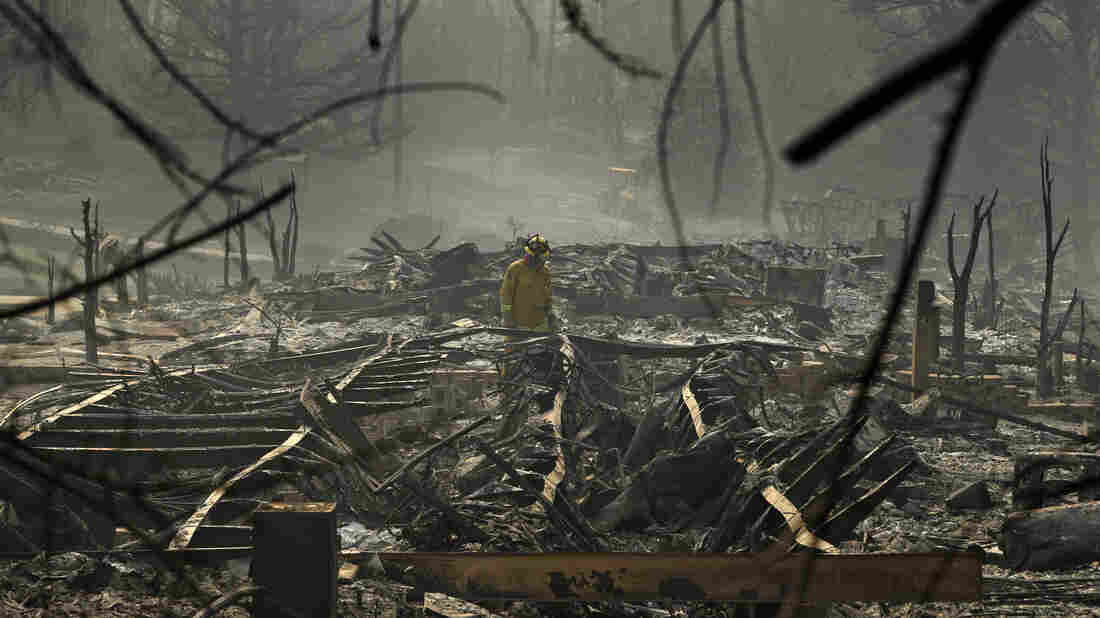 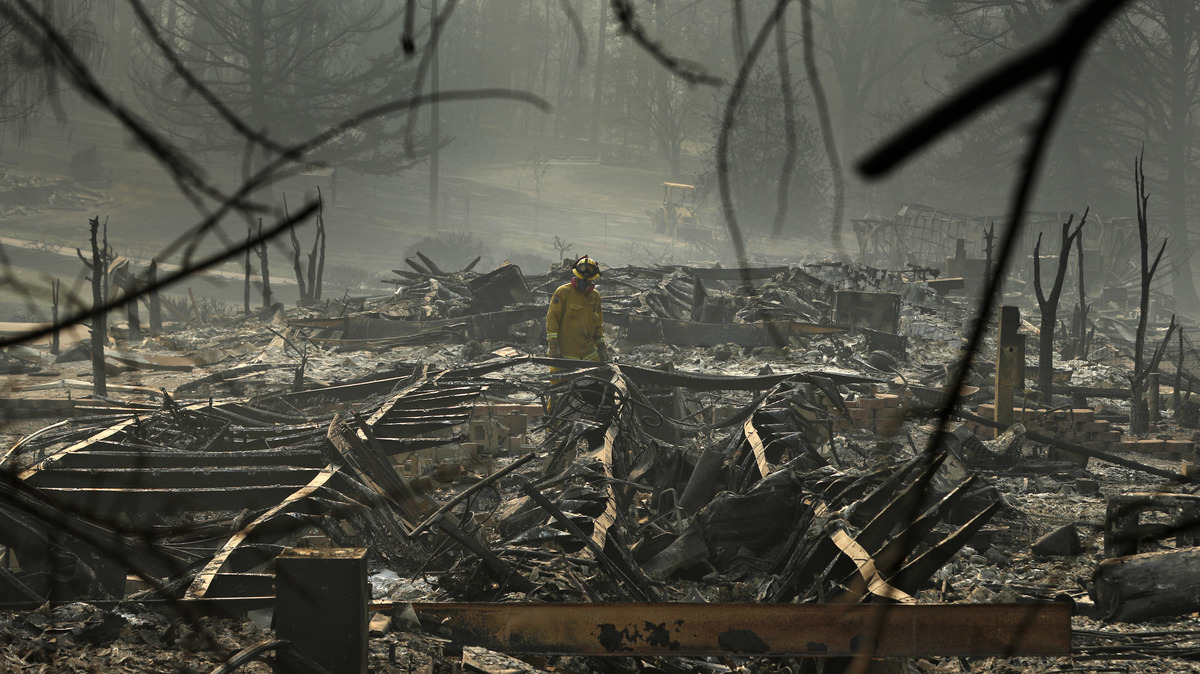 A firefighter searches a trailer park destroyed in the Camp Fire on Friday Paradise, Calif.

On the morning of his 23rd birthday, Leonel Salas is just getting off the fireline after battling the Woolsey fire all night in Southern California.

He's exhausted after working for 24 hours, but relieved to be at the base camp in Camarillo where there are hot meals, sleeping pods and mobile showers.

Salas and his crew have been on the job for over a week now. When he got the call to head out to the fire he didn't even have the chance to say goodbye to his parents.

"I hate to compare it to military, but it's similar to that because one minute you could be [home] and then all of a sudden, you're gone." he says.

Fighting fires has been compared to the military in another way — the stress that soldiers go through. In fact, a report by the International Association of Firefighters found that firefighters experience PTSD at rates similar to what's seen in combat veterans. The Ruderman Family Foundation has identified another startling trend: Last year, more firefighters died by suicide than in the line of duty.

So fire officials are trying new ways to alleviate the stress of overworked firefighters and change the culture.

Salas vividly remembers last year when he was in Northern California fighting the monthlong Carr Fire. He saw people's homes destroyed in seconds. It made him pause and think about what if he lost his own home. But besides property destruction, firefighters see other things nobody wants to see or talk about.

"There's some things that we see that's basically beyond us that we can't really help," Salas adds.

The firefighter and first responder culture can encourage a kind of stoicism that makes it hard for many firefighters to open up about trauma they face.

"The culture's always been, you know, suppress suppress, suppress," says Cal Fire Capt. Kevin Molloy. "We're good and go on to the next call."

But California fire season is changing; it's become longer and more destructive. Firefighters are now fighting massive wildfires back to back. The cumulative stress of it all can take a toll on a firefighter's mental health.

In 2015, Cal Fire noticed the need to provide immediate support to firefighters and first responders in the field during the Valley Fire, a wildfire that torched parts of Lake and Napa counties in Northern California for more than a month and destroyed 1,995 structures and 76,067 acres. That's when Cal Fire first placed a peer-support team at a base camp, and that practice has continued.

Having each other's backs

At the Woolsey fire base camp where Salas and other firefighters recuperate, a mobile trailer with a sign reading "PEER SUPPORT" is set up among the sleeping pods, medics and the mapping center. Cal Fire set it up on the fifth day of the Woolsey Fire to provide a safe, confidential space for firefighters to talk to chaplains and fellow first responders — and to pet emotional support dogs.

Molloy is part of the peer support team. He jokes, "Sometimes people like to see the dogs more than they like to see us, but that's OK."

But the peer support members are also there to just lend an ear to anyone who needs it.

"We are good listeners," Molloy says. "That's our job."

Some common symptoms he says he sees in firefighters are lack of sleep, grief, sadness and frustration.

"What we tell those individuals is, those are normal reactions to an abnormal situation," says Molloy. He and the others also offer suggestions on how to cope ranging from controlled breathing exercises to warning firefighters not to consume alcohol on their day off to getting adequate sleep.

But if a firefighter needs extra help, the team will refer the person to see a mental health specialist and make sure that he or she will have the support needed after returning home.

At the end of his shift, Salas takes a few bags of food over to the picnic tables. He says he doesn't need peer support right now. But he says firefighters aren't heroes. They aren't invulnerable to the things they experience on the job.

"We're human at the end of the day," Salas adds. "We go through a lot of the same things that a lot of the citizens are going through as well."

So he's glad the support trailer is there with fellow firefighters who have his back in case he ever does need it.