Accessibility links
Inside The Business Of School Security To Stop Active Shooters Schools in the U.S. have spent billions of dollars on systems to stop shooters. Washington Post reporter John Woodrow Cox says it's not clear how effective these measures can be. 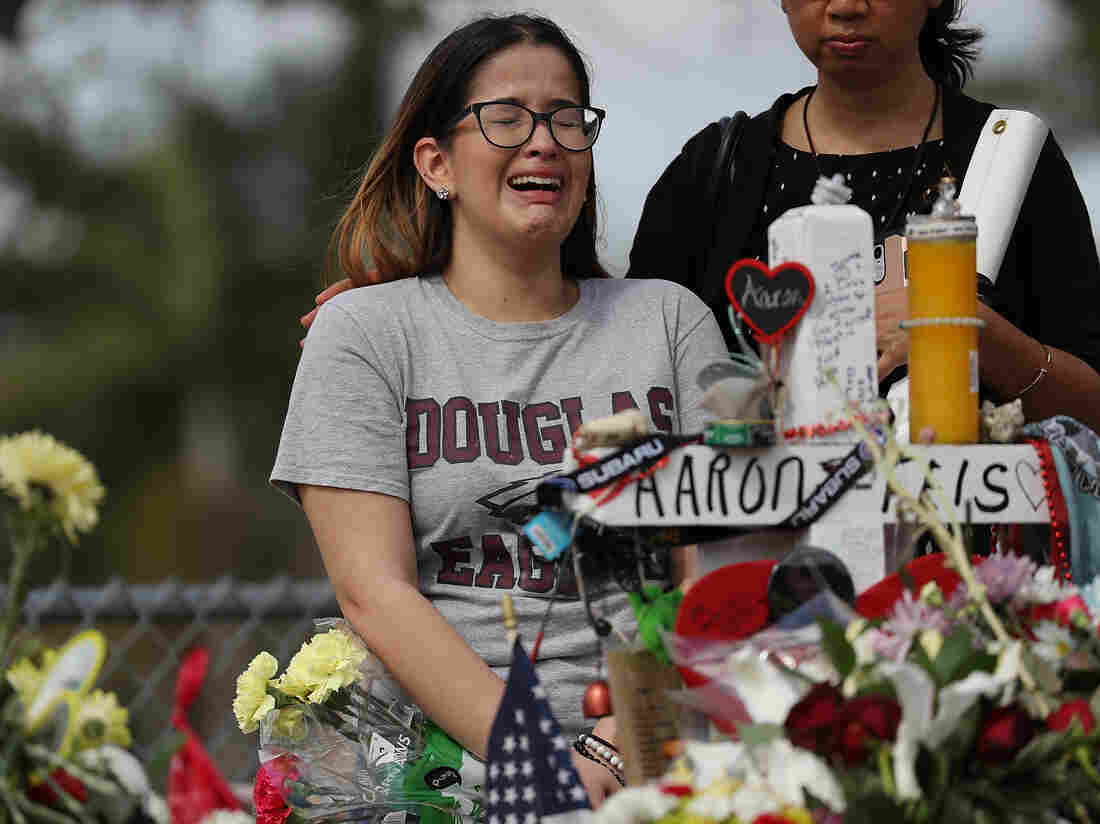 School shootings have led to a boon to the business of security technology. Joe Raedle/Getty Images hide caption 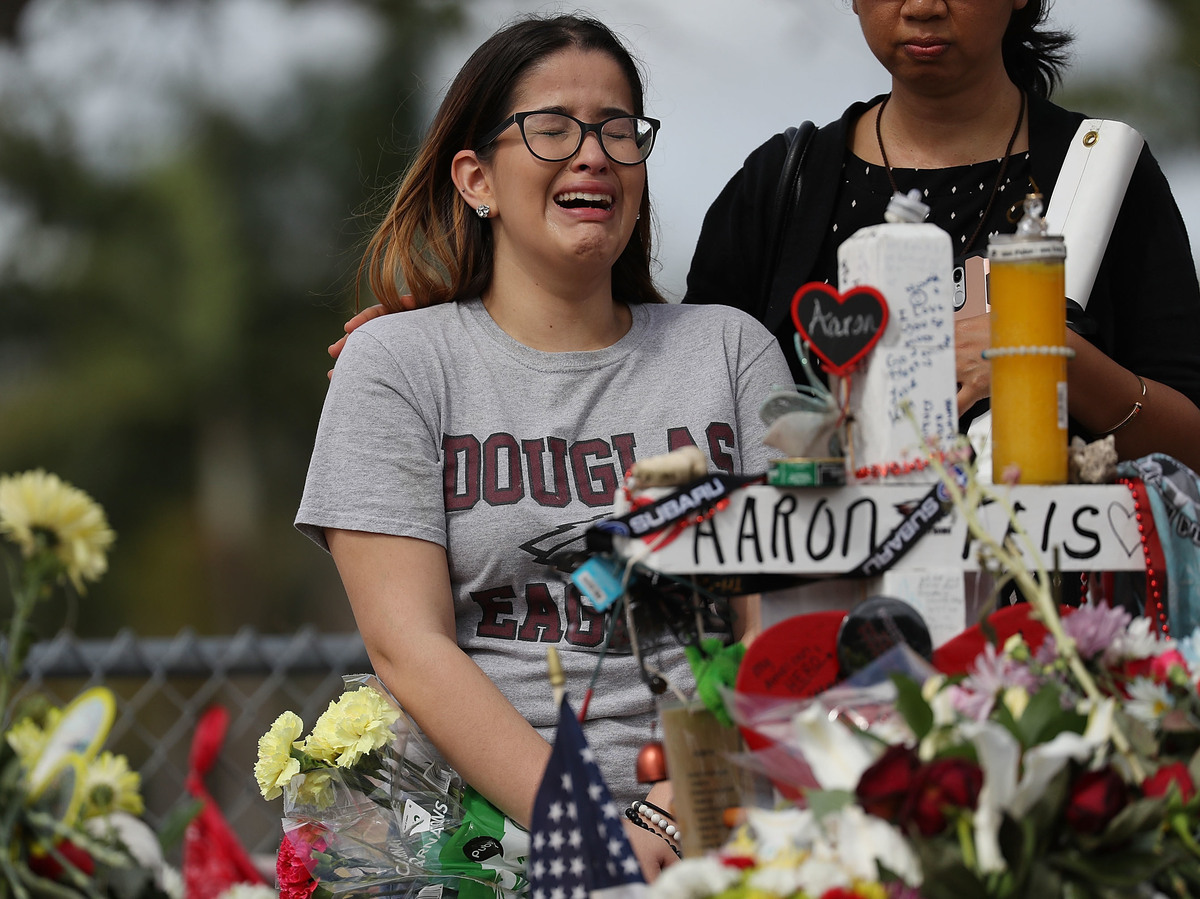 School shootings have led to a boon to the business of security technology.

School shootings have taken a terrible human toll. They have also been a boon to the business of security technology.

Over the summer, Washington Post reporter John Woodrow Cox saw an array of items on display at an expo in Orlando, Fla. He and fellow reporter Steven Rich went on to investigate whether any of the technology being promoted and sold really helps save lives.

When he went to the expo in July, Cox says there were people pitching just about anything they could think of that might make schools safer in the event of a shooting.

"There were things like pepper ball guns that have typically been used in combat zones," Cox says. "There was a guy who had just come back from Afghanistan and it's basically a gun that shoots a sort of a paintball that is filled with a pepper mixture meant to take down a gunman."

Another man at the conference tried to sell the idea of embedding former special forces agents inside schools, but having them pose as gym teachers to allow them to discern which students were potential threats.

Other companies had facial recognition software and bullet proof doors for sale. But despite all that technology, teachers and school administrators that have dealt with incidents of gun violence aren't quick to say more tools or programs would have necessarily helped.

As part of The Post's reporting, surveys were sent to educators at schools that had suffered shootings since the 2012 Sandy Hook massacre in Newtown, Conn. Roughly half of the schools responded.

"There was only one school that suggested any sort of school safety technology would have helped, and the guy mentioned it in sort of in a long list of things," Cox says. "He said, 'Well maybe metal detectors would have prevented the shooting,' but there were a lot of schools that had all sorts of school technology that didn't work."

The School Shootings That Weren't

Cox points out that in Alabama, one high school had invested a significant amount into security. That included three armed resource officers, metal detectors and cameras, but all of that failed to stop a student from getting a gun into the school. From there, the student who brought the gun drew it, played with it while showing others and it fired, accidentally striking a girl in the chest and ultimately killing her.

"Despite all of that effort, they couldn't stop that gun from getting into the school — and we've seen that over and over, " Cox says. "At least 40 percent of the schools that have had some incident of gun violence on campus since 1999 have had resource officers at the time. There is no sure thing whether it's a resource officer or a piece of technology that ensures safety from gun violence for kids at school."

What schools say does work is preparation. Cox says preparation was the key to preventing dozens of deaths in a California town last November when a man began a shooting rampage.

"Some staff members heard gunshots approaching the school," he says. "They called for a lockdown immediately. All the teachers got all the kids inside. They locked all the doors and the gunman, who had a sort of modified AR-15, fired more than 100 rounds into the buildings there and he injured one student, but because they locked the doors and he couldn't get inside, there were dozens of lives saved."

Still, despite agreement over the importance of preparation, there is still disagreement over what kind of drills should be taught to kids.

One method adopted by some schools is the ALICE Training program. ALICE, which stands for Alert, Lockdown, Inform, Counter and Evacuate, involves teaching students "in certain scenarios to essentially attack the gunman," Cox says.

"Specifically what they're saying is arm yourself with any sort of objects you have and just in case throw it at the gunman and swarm the gunman," he says. "Students as young as elementary age are taught that by their schools, and that's really controversial. Because when you see these videos online where people are practicing the ALICE techniques and all the students attack the gunman and the gunman just falls to the ground — well, that's unlikely to go that way in a real-life situation where somebody is there to kill you."

Yet as schools try to decide whether to invest in these technologies, Cox says they often make "these decisions on what to invest in based on politics or based on reaction."

"We see things like Parkland happen and then we see big spending all over the country," he says. "And often schools and school districts are not methodical in deciding, 'OK, this is what is the smart thing for us.'"

As both The Post and NPR have reported, school shootings are not actually a growing epidemic, and as Cox says, "it's very unlikely that a student is ever going to experience a school shooting."

Because of this, he says that schools shouldn't rush their decisions when they're looking to increase security or enhance their preparation in the event of a shooting.

"What is critically important is that schools take their time," he says. "They shouldn't be investing millions of dollars into products because somebody said they were an expert and this is the thing that will work. They should be stepping back and really studying 'what does our district need compared to that other district.'"

The audio for this story was produced by All Things Considered intern Lilly Quiroz and edited by NPR's Martha Wexler. NPR's Wynne Davis adapted it for Web.

A previous version of this story incorrectly referred to the 2012 Sandy Hook massacre in Newton, Conn. The correct name of the town is Newtown.