Accessibility links
2018 Elections: 9 New Lawmakers With STEM Backgrounds Set To Join Congress "Somebody with a technical background might think in a little bit different than the way, for instance, that a lawyer would think," says Chrissy Houlahan, a new lawmaker with a STEM background. 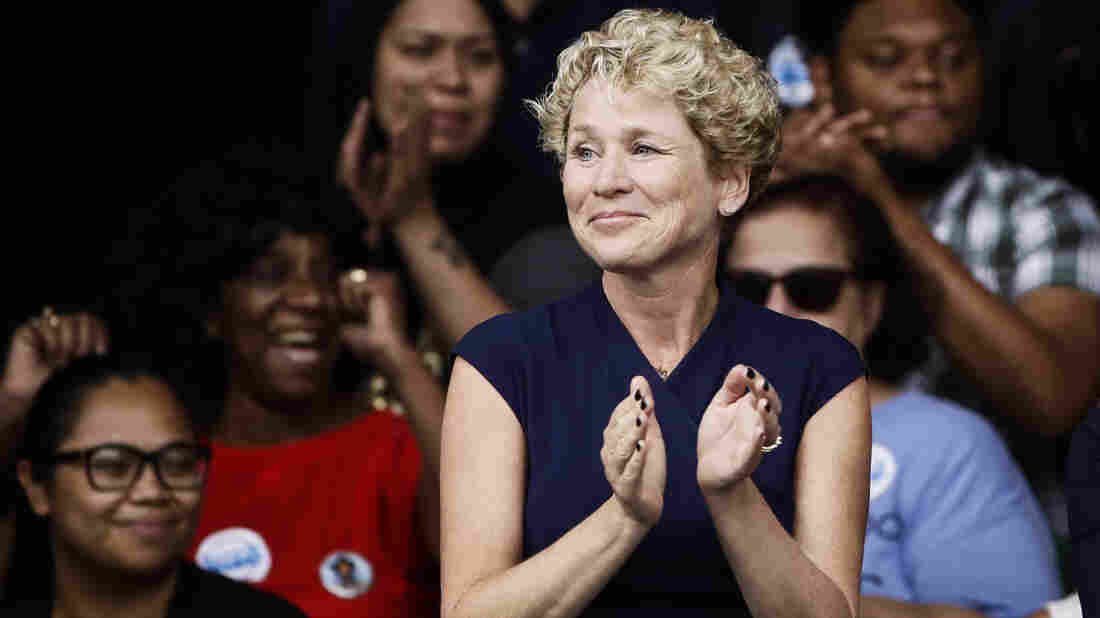 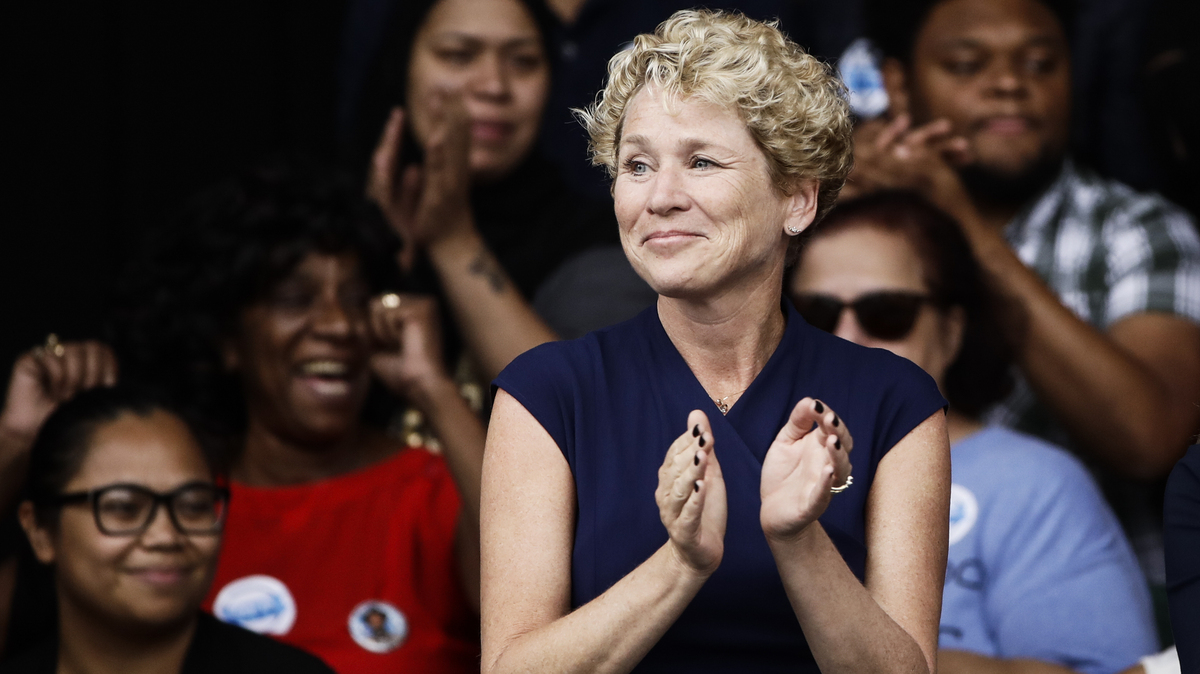 Then-candidate Chrissy Houlahan during a campaign rally in Philadelphia on Sept. 21, 2018.

Chrissy Houlahan has done a lot with her industrial engineering degree over the last 30 years including serving in the Air Force, working in the aircraft manufacturing industry, being the COO of a sports apparel company and even teaching high school chemistry.

Houlahan says her science, technology, engineering and mathematics – or STEM – background has allowed her to be fluid in her career by helping her tackle everyday problems through a unique lens.

"Somebody with a technical background might think in a little bit different than the way, for instance, that a lawyer would think," Houlahan says. This was one of her biggest motivators for running for office in Pennsylvania's 6th Congressional District, she says.

"I think a person with a technical background could be really useful in Washington," says Houlahan, noting that Congress is called to pass laws on issues the Founding Fathers would have never thought imaginable.

"Anything from cybersecurity, biosecurity, information technology and privacy issues are all things the government now has the responsibility to be worried about," she says. "Those are all things that scientific and technical backgrounds can be used for."

Now she has the chance to prove her theory.

Houlahan won her congressional House race this month, defeating a Republican opponent who is a tax lawyer and businessman. She is one of the nine STEM-related professionals – one senator and eight members of the House of Representatives — voted into office during the 2018 midterms. All are Democrats except for one Republican and the cohort includes an ocean scientist, an aerospace engineer, a software engineer and a biochemist.

According to the latest congressional profile, released before Election Day, only about seven percent of the 115th Congress reported they have some kind of STEM background. Occupations that are typically associated with people running for office — lawyers, career politicians, business men and women — were the most frequently listed.

There's a reason there are not a lot of STEM professionals in Congress, says Shaughnessy Naughton, founder of 314 Action, an advocacy group that helps candidates with such a background move beyond advocacy and into action.

Naughton started the group — named after the most widely known mathematical ratio — in 2016 in response to concern about the Trump administration's attacks on science, especially the president's stance on climate change. And 314 Action helped eight of the new STEM professionals get elected to Congress in the recent elections.

Naughton says while there are procedural hurdles for anyone trying to break into politics, scientists also face cultural barriers.

"Scientists and physicians and STEM professionals often think of science as above politics, or their profession is above politics and therefore they shouldn't be involved in politics," says Naughton, who staged an unsuccessful campaign for Congress herself in 2014 and then again in 2016. "And I think we see the results of that attitude by just a real dearth of people with scientific backgrounds and the often misplaced priorities that are put forward [by Congress]."

What Do Blue And Red America Have In Common? Craft Breweries — And More

314 Action spent more than $2 million endorsing 13 candidates in the midterm elections. Eight of them won their races, while the five candidates who did not still made tremendous gains in promoting STEM backgrounds as a way to talk about local issues, says Naughton.

"I think it's important because we would have a policy more based in facts and evidence," Naughton tells NPR. "But I also think we would have a more collaborative approach to governing if more scientists were at the table."

What 2018 Elections Could Tell Us About The 2020 Presidential Map

Through trainings and financial support, 314 Action helps STEM professionals-turned-candidates promote their experience and skill set in their run for office. 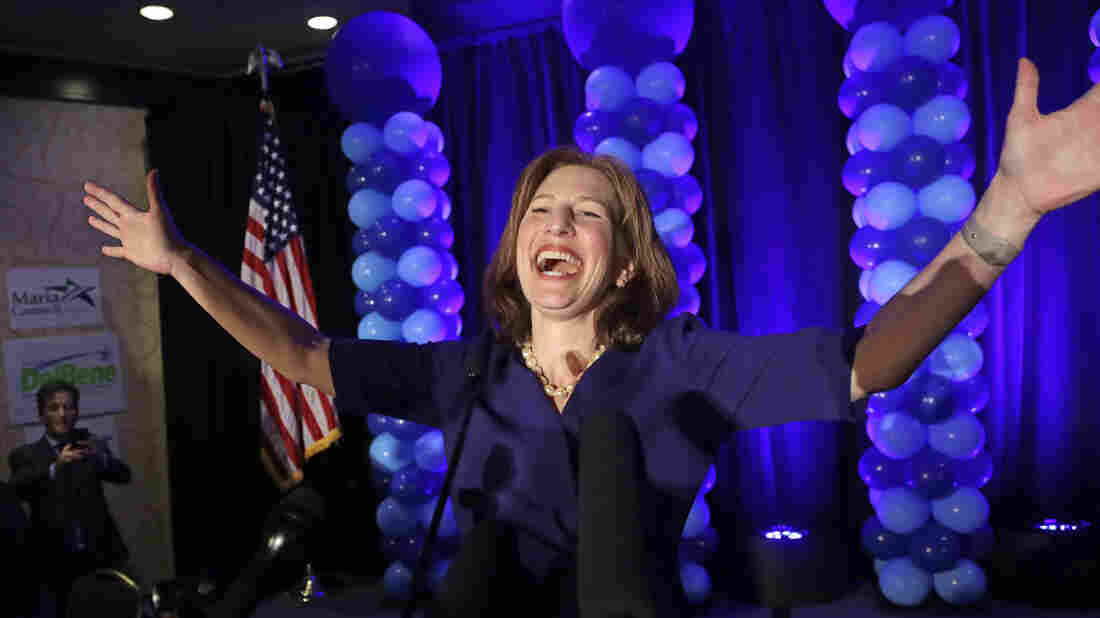 Congresswoman-elect Dr. Kim Schrier says the group helped her use her experience both as a pediatrician and a Type 1 Diabetes patient to connect with voters. Last week she become the first Democrat to ever represent the 8th Congressional District of Washington state.

"It gave me the ability to speak to the issues that other candidates just don't have and an expertise that I can really bring to Congress to help fix our broken medical system," say Schrier, who decided to run because Republicans in Congress kept trying to repeal the Affordable Care Act.

"And that directly affected patients like me with pre-existing conditions," she says.

Schrier hopes to bring a unique voice when topics such as health care, the pharmaceutical industry and prescription drugs arise in the next Congress.

Protection From The Sea Is Possible, But Expensive

Congresswoman-elect Elaine Luria says her being a nuclear engineer connected with voters on issues that deeply affect in the 2nd Congressional District of Virginia such as global warming, tourism, aquaculture and offshore drilling. Her district includes Virginia Beach, the Norfolk Naval Station and other parts of that city – which is starting to grapple with increased flooding as sea levels rise.

"When we talk about those issues they are environmental issues and they have a scientific basis but because of the nature of our region they're also people's livelihood-type issues," she says. "All of these things impact the economy here."