Accessibility links
Virginia Could Be The State To Give Women Equal Rights Nationwide A bipartisan coalition of Virginia lawmakers is working to make the state the 38th and final one needed to ratify the Equal Rights Amendment to the U.S. Constitution. 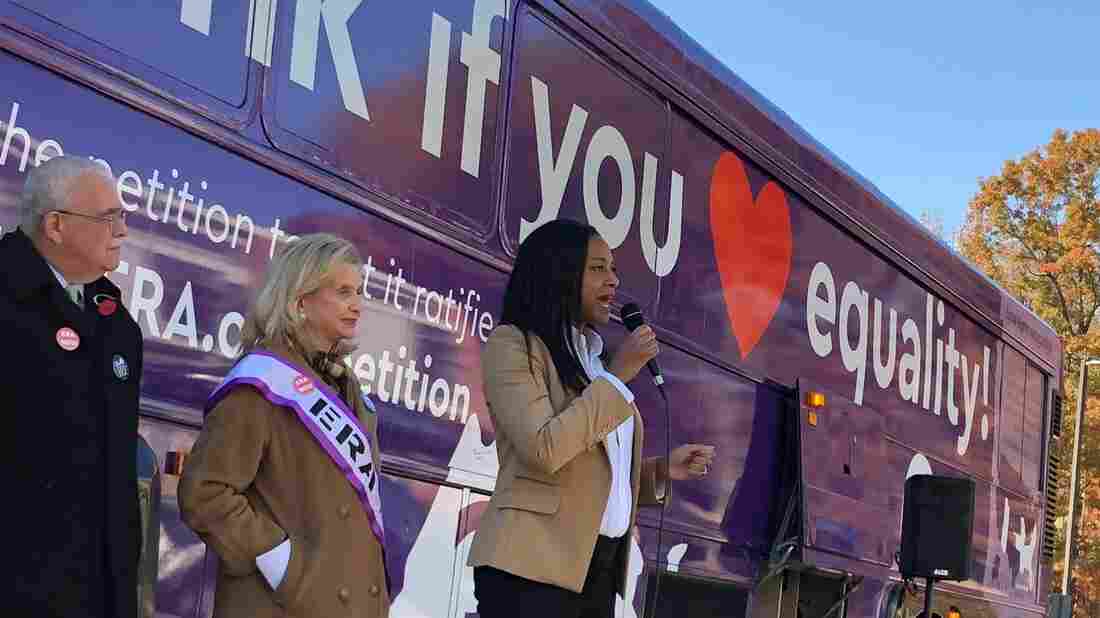 "Honk if you love equality," reads the side of the bus Virginia lawmakers, including Del. Jennifer Caroll Foy (pictured speaking), have taken around the state to promote ratifying the Equal Rights Amendment. Whittney Evans/WCVE hide caption 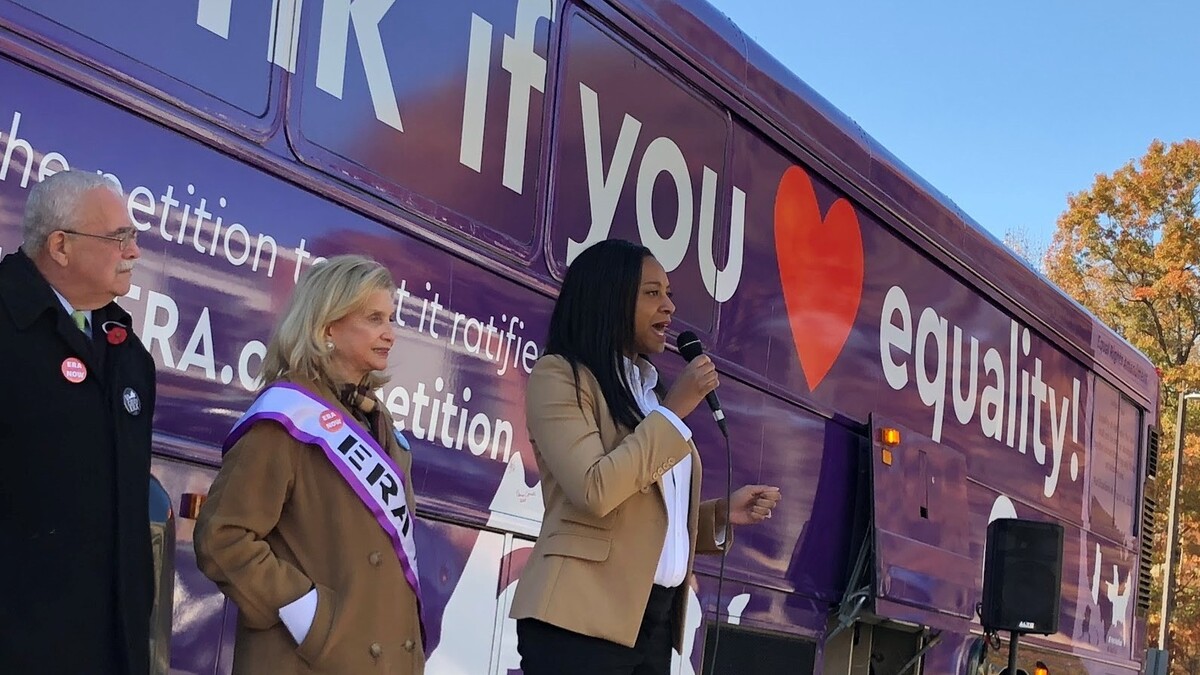 "Honk if you love equality," reads the side of the bus Virginia lawmakers, including Del. Jennifer Caroll Foy (pictured speaking), have taken around the state to promote ratifying the Equal Rights Amendment.

Landmark court rulings, laws and constitutional amendments have given women the right to vote, to make decisions about their reproductive health and, to some degree, to receive equal pay for equal work. But women are not guaranteed equal rights under the U.S. Constitution. That's why, for decades, women's rights advocates across the country have supported an Equal Rights Amendment.

Nearly 50 years ago, Congress passed the Equal Rights Amendment, barring sex discrimination. But 38 states had to ratify it before it could take effect. Earlier this year, Illinois became state No. 37, and a bipartisan group of lawmakers is campaigning to make Virginia the final, historic vote.

For the past 10 days, those lawmakers have traveled the state on a bus tour, trying to grow enthusiasm for the amendment. And they will need a lot of it. Last session, a group of primarily Democratic lawmakers tried to ratify the amendment, but it didn't even make it to the floor for a vote. Today, there seems to be Republican support and more energy around the ratification than before.

"When we talk about things such as equal pay for equal work, ending sex discrimination, what we are talking about is giving those things teeth," says Virginia Del. Jennifer Carroll Foy, a Democrat.

Foy says laws can change and court rulings can be reversed, so she's sponsoring a bill to make Virginia the 38th, and final, state.

"We are the birthplace of the Bill of Rights, but we need to continue to make sure that we include this fundamental American value, which is equality of everyone before the law in the U.S. Constitution," He said Sunday as he wrapped up the ERA campaign's 10-day statewide bus tour.

A bipartisan group of lawmakers in Virginia hopes their state is the 38th, and final one needed, to ratify the Equal Rights Amendment. Whittney Evans/WCVE hide caption

A bipartisan group of lawmakers in Virginia hopes their state is the 38th, and final one needed, to ratify the Equal Rights Amendment.

Some legal experts say an Equal Rights Amendment will give women a better chance at winning discrimination cases in court.

Patricia Wallace, an attorney in Richmond, says it also will be easier to strike down state laws, like one in North Carolina that says it's not legally considered rape if a woman agrees to have sex then changes her mind.

"There are various little statutes around the country that do things like that," Wallace says. "Where there's a disparate treatment of men and women."

Wallace says it could also enshrine the policy that allows women to be in active military combat.

The ERA has bipartisan support in Virginia, but it's still a hard sell for some conservatives.

"Our concern is that people don't understand what it actually does," says Victoria Cobb, president of the group Family Foundation of Virginia.

Cobb fears the ERA is a vehicle to expand abortion rights disguised as women's equality and that it will force women to be drafted into the military.

"We should be able to embrace a society that can have equal respect and dignity and pay for women without sameness. Without everything between men and women having to be the same," Cobb says. "My daughter should not have to be drafted into military combat to ensure that she can be paid equally."

Proponents say Congress already has the authority to include women in the draft, should it be reinstated.

The most prevalent argument against the ERA is more logistical than ideological. The deadline to ratify the amendment passed decades ago. But supporters are confident Congress can extend or even rescind that deadline, which it did once in the 1970s.

But that's a fight for another day.