Accessibility links
Shouting 'Mexico First,' Hundreds In Tijuana March Against Migrant Caravan While some residents of the northern Mexican city have said "all migrants are welcome," a group of protesters this weekend demanded they be kicked out. 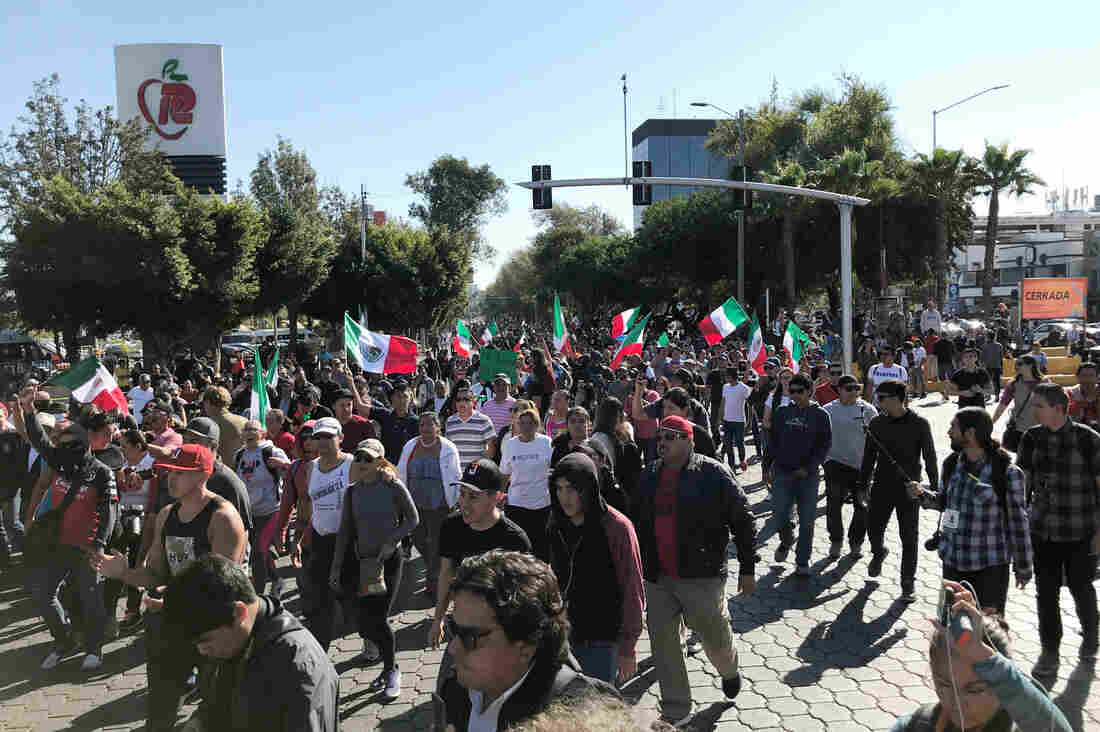 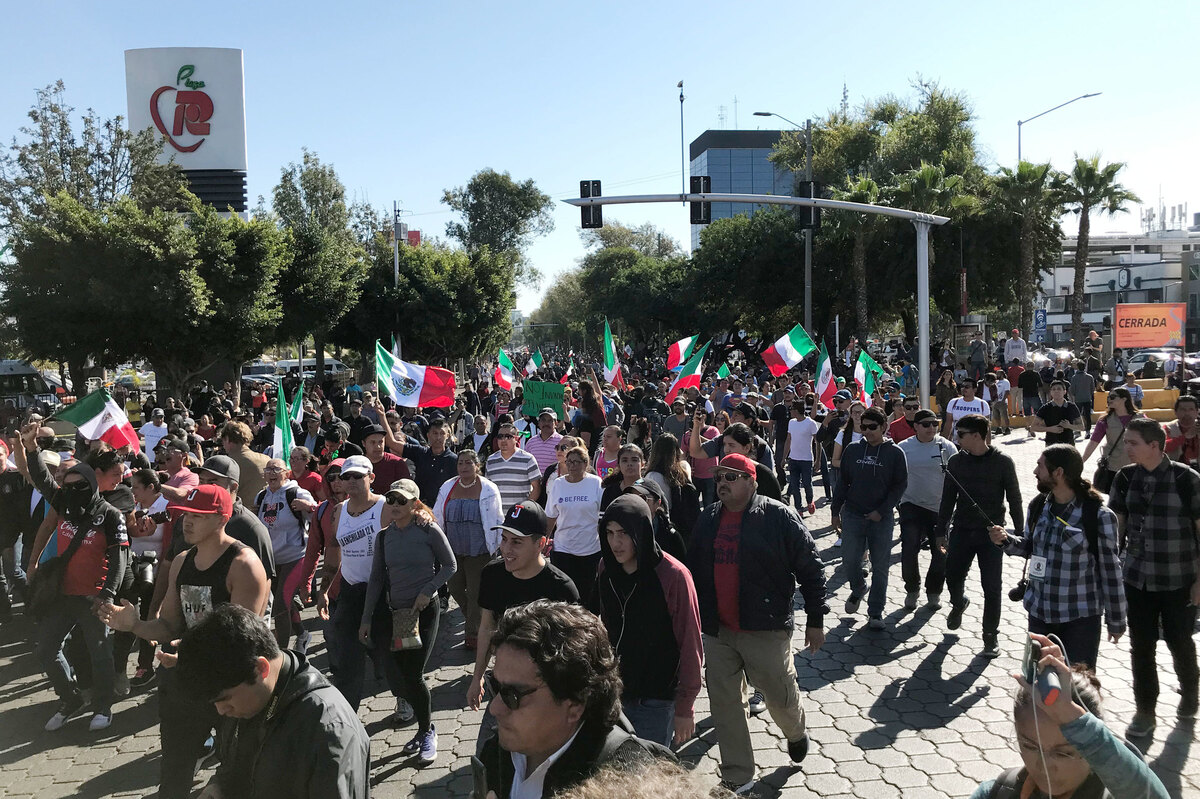 The message for the migrant caravan was clear from marchers on Sunday in Tijuana, Mexico: We don't want you here.

"We want the caravan to go; they are invading us," said Patricia Reyes, a 62-year-old protester, hiding from the sun under an umbrella. "They should have come into Mexico correctly, legally, but they came in like animals."

A few hundred Tijuanenses gathered in the city's high-end Rio area to protest the groups migrating from Central American countries.

Demonstrators held signs reading "No illegals," "No to the invasion" and "Mexico First." Many wore the country's red, white and green national soccer jersey and vigorously waved Mexican flags. The crowd often slipped into chants of "Ti-jua-na!" and "Me-xi-co!" They sang the national anthem several times.

The march is a foreboding sign for the migrants who have formed caravans to cross Mexico in hopes of reaching the United States. Many, but not all, of the migrants have come to Tijuana, which borders San Diego, to request asylum in the U.S. They come primarily from Honduras, though some are from other Central American countries. A number of the asylum-seekers say they can't return home after receiving threats from street gangs such as MS-13 and the 18th Street gang, as well as threats from government figures in their countries.

But that process could take months, and the Trump administration is working to block them from entering with new rules to limit asylum.

While the protesters numbered only a few hundred, in a city of more than 1.6 million, vitriol against the migrants has spread across social media in Tijuana in recent days.

"They should create concentration and deportation camps with federal funds," wrote one commenter on the Facebook page organizing the march.

"Tijuana is a place that welcomes anyone, but you must have papers, you must identify yourself," demonstrator Magdalena Baltazar said on Sunday, as she waved a Mexican flag and marched through the city. "We work hard here. We don't get handouts. The government shouldn't be giving things to migrants when plenty of Mexicans are in a difficult position."

Most of the protesters said the migrants should be detained and deported.

The marchers had intended to head to the mayor's office to demand action but, as police cars raced ahead to block intersections, many protesters veered off, heading toward a shelter where more than 2,500 migrants are staying, according to Tijuana city officials.

Many in Tijuana, however, are angered by the demonstrators' anti-immigrant sentiment.

"Say that to my face," a protester yelled back.

A few blocks ahead, a family stood on a balcony and shouted at the protesters.

"This is not what Tijuana is like!" cried an elderly woman. "All migrants are welcome here!"

A block away from the shelter, local police in riot gear set up a barricade. Some marchers yelled, shoved and threw water at the officers, but they could not advance. 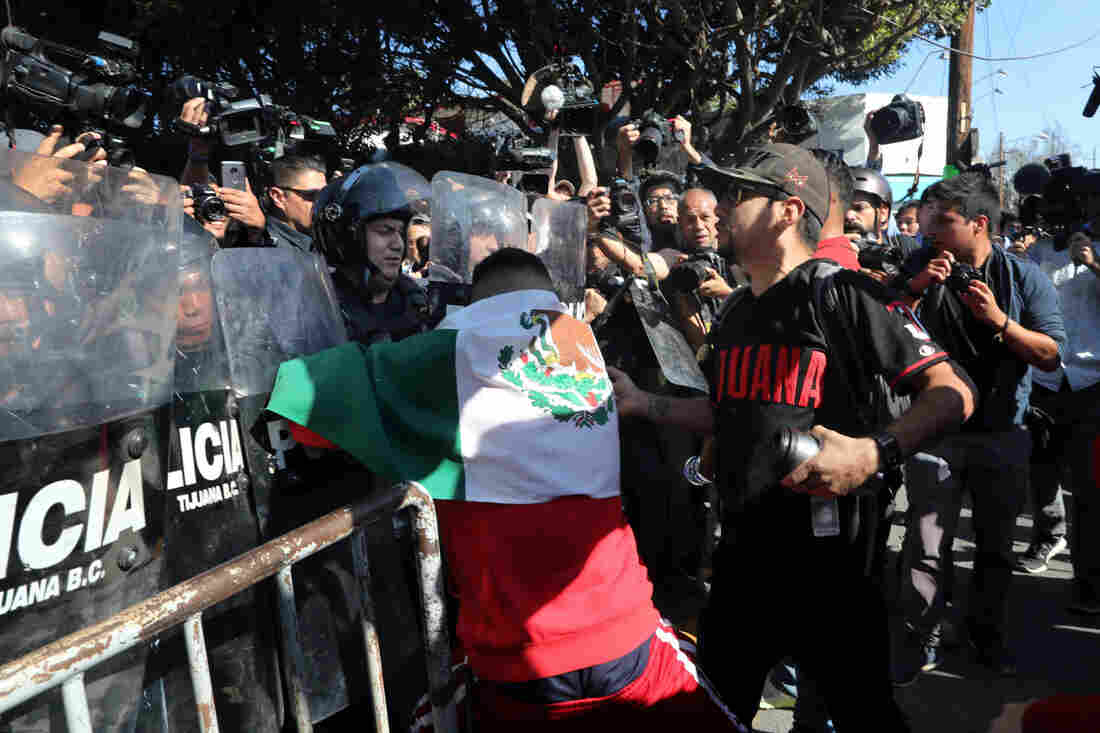 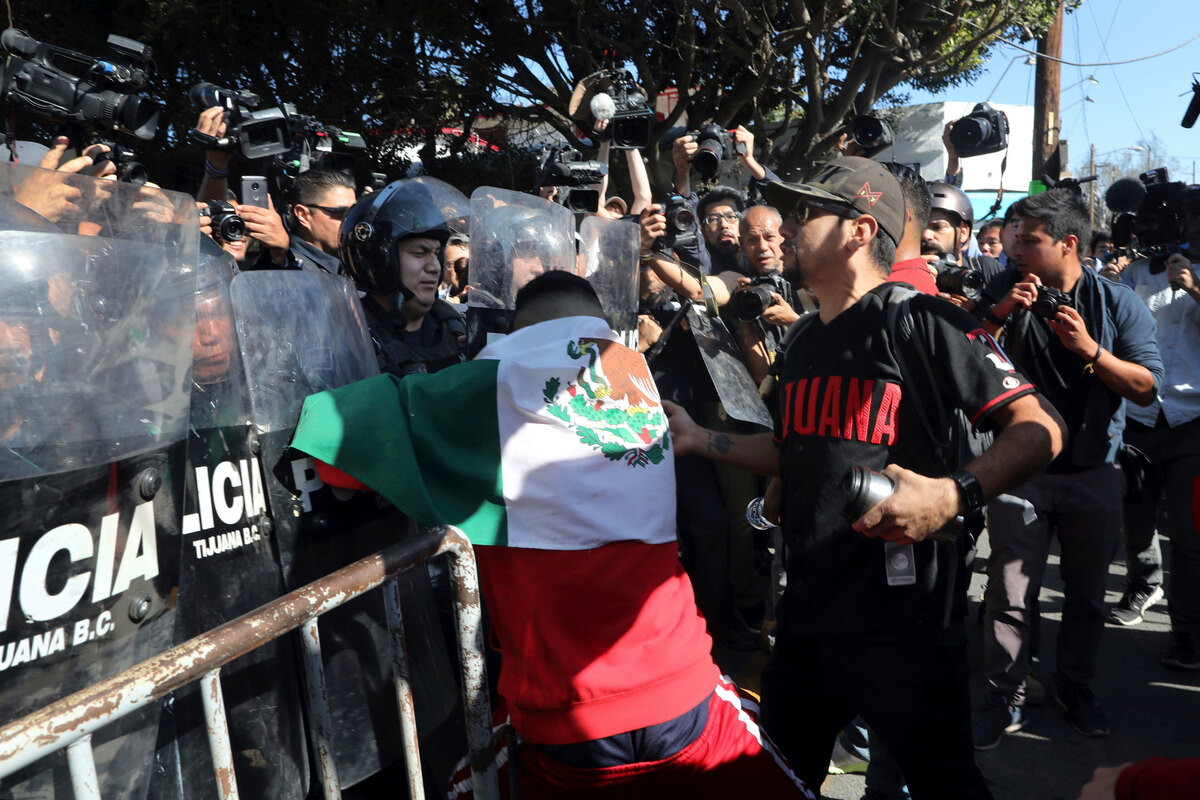 Police stand guard to protect a migrant shelter as demonstrators protest the presence of thousands of Central American migrants in Tijuana, Mexico, on Sunday.

Police kept the migrants inside the shelter to avoid conflict. The only sign of the march from inside was distant shouting and horns.

Carlos González, a migrant from Honduras, angled a little mirror to get a view of the protest down the block.

"What do they intend to do?" he asked. "There are women and children in here."

The demonstration thinned out over the next few hours. But it left some migrants startled.

"We don't know why they came here. I don't know what we did to offend them, so what are we supposed to do?" said Jesús Uribe, from Nicaragua. "This is the first time I've felt this in Mexico. Mexicans have been very welcoming to us."

"I would dare say that not all of them are migrants," Mayor Juan Manuel Gastélum said last week in an interview with Milenio television, suggesting some members of the caravan were criminal infiltrators. "Sure, there are some good people in the caravan, but many are very bad for the city."

Gastélum said four alleged members of the caravan had been arrested for unspecified crimes.

"Human rights are for only upstanding humans," he said, creating a perverse turn of phrase in Spanish.

The Tijuana mayor has been seen sporting a Trump-style "Make Tijuana Great Again" hat. But Gastélum is not a popular leader: A poll in March gave him just 4 percent approval from residents. The murder rate in the city has spiked during his tenure.

The Tijuana city government is providing a stadium for the migrant shelter, as well as blankets, sleeping pads, food and some basic medical care. Nonprofit humanitarian groups are adding to that support.

But Gastélum says Tijuana lacks the funds to continue supporting the migrants, who he thinks will be in the city for more than six months to be processed through the U.S. asylum system, and has requested support from Mexico's federal authorities.

The tensions are unlikely to die down soon: According to nonprofits at shelters in the border city Mexicali, 2,000 caravan members are expected to arrive in Tijuana in coming days. Another caravan of roughly 1,500 migrants is just north of Mexico City, according to a human rights commission that set up a shelter in the capital. Smaller contingents continue in southern Mexico.

Even before the caravan reached the city earlier this month, migrants in Tijuana created an informal list of names to keep track of those hoping to seek asylum in the U.S. As caravan members have added their names, the list recently surpassed 3,000.