Accessibility links
President Trump To Pardon A Turkey Tuesday. Here's How The Tradition Began President Ronald Reagan's pivot away from a reporter's question about possibly pardoning those involved in the 1980s arms-sales affair is a key moment in the history of the event taking place Tuesday. 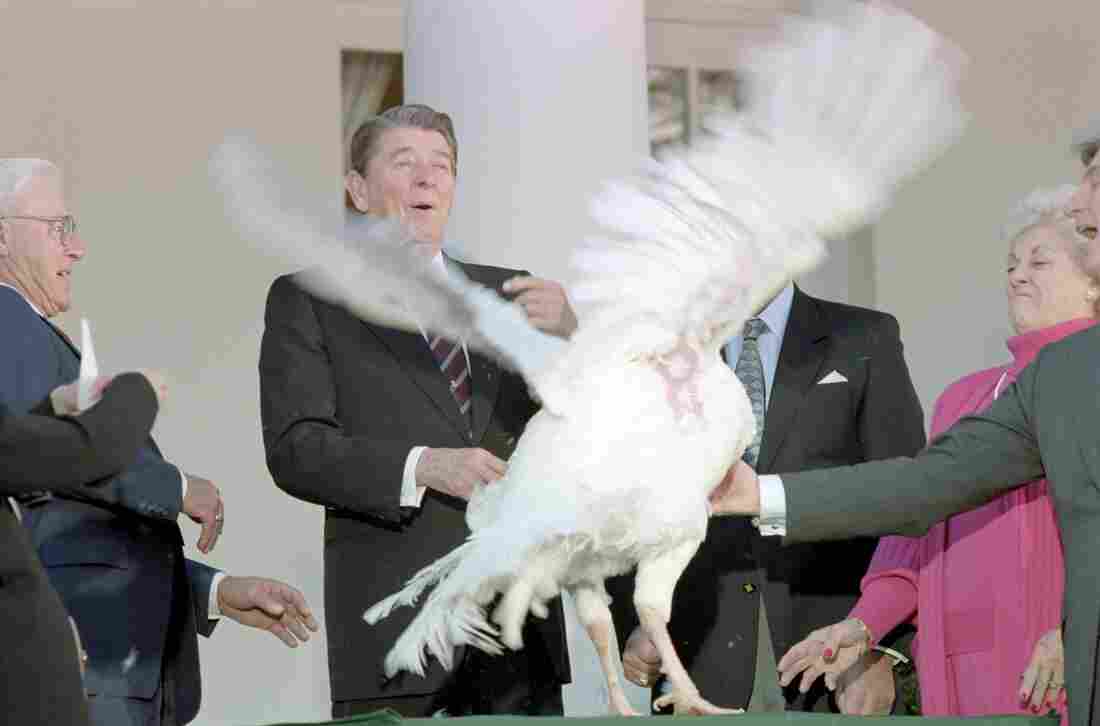 This turkey seemed to be in a fowl mood in 1987 when President Ronald Reagan used the word "pardon" for the first time in reference to sparing a Thanksgiving turkey. Smith Collection/Gado/Getty Images hide caption 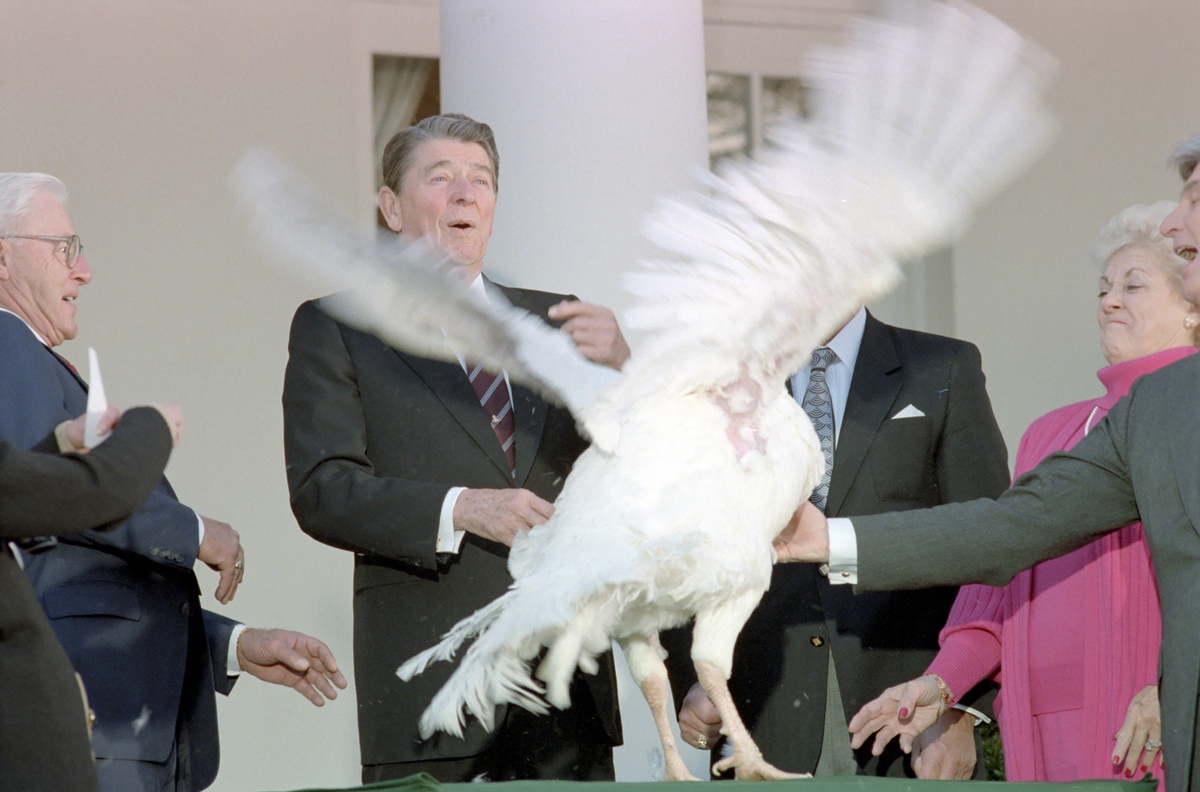 This turkey seemed to be in a fowl mood in 1987 when President Ronald Reagan used the word "pardon" for the first time in reference to sparing a Thanksgiving turkey.

The president is going to pardon a turkey.

But seriously, it's happening again Tuesday — the peculiar Washington tradition of a president pardoning a Thanksgiving turkey.

"Over the past 10 months, Melania and I have had the pleasure of welcoming many, many special visitors to the great White House," President Trump said during his first turkey-pardoning ceremony last year. "We've hosted dozens of incredible world leaders, members of Congress and, along the way, a few very strange birds. But we have yet to receive any visitors quite like our magnificent guest of honor today — Drumstick," Trump continued. "Hi, Drumstick. Oh, Drumstick, I think, is going to be very happy."

But maybe the weirdest thing about the turkey-pardon tradition — and there are a lot of weird things about it — is its origin. It can be traced directly back to, of all things, the Iran-Contra scandal.

Here's how, from a piece originally written by this author in 2015:

"Ronald Reagan in 1987 was technically the first president to use the word 'pardon' about a turkey, but it was really just a way to deflect questions about the Iran-Contra scandal and whether he would pardon key players involved — Oliver North and John Poindexter. The bird, 'Charlie,' was already headed for a petting zoo, but after Sam Donaldson of ABC News pressed Reagan on whether he'd pardon North and Poindexter, Reagan responded, 'If they'd given me a different answer on Charlie and his future, I would have pardoned him.' "

The ceremony was then formalized by President George H.W. Bush in 1989. "[L]et me assure you, and this fine tom turkey, that he will not end up on anyone's dinner table, not this guy," Bush said. "He's granted a presidential pardon as of right now — and allow him to live out his days on a children's farm not far from here."

Visit @WhiteHouse to vote for the name of the #turkey that will participate in tomorrow’s ceremony! #PresidentialTurkeys #thanksgiving pic.twitter.com/Fy5YKdtSpX

The birds always get punny names. This year is no different — they are Peas and Carrots, ironic and perhaps confusing considering turkeys are meat and not vegetables. For the first time, the turkeys come from South Dakota and are staying in a luxury hotel room, at the Willard InterContinental in Washington, before the ceremony.

Which turkey should be pardoned during the National Thanksgiving Turkey Pardoning Ceremony?

After the pardoning, Peas and Carrots will live at Virginia Tech’s “Gobblers Rest” exhibit.

The White House conducted a Twitter poll for people to vote on which turkey to pardon (and it also collected email addresses beforehand — handy political tools — from those who wanted to be the first to know the names of the birds). 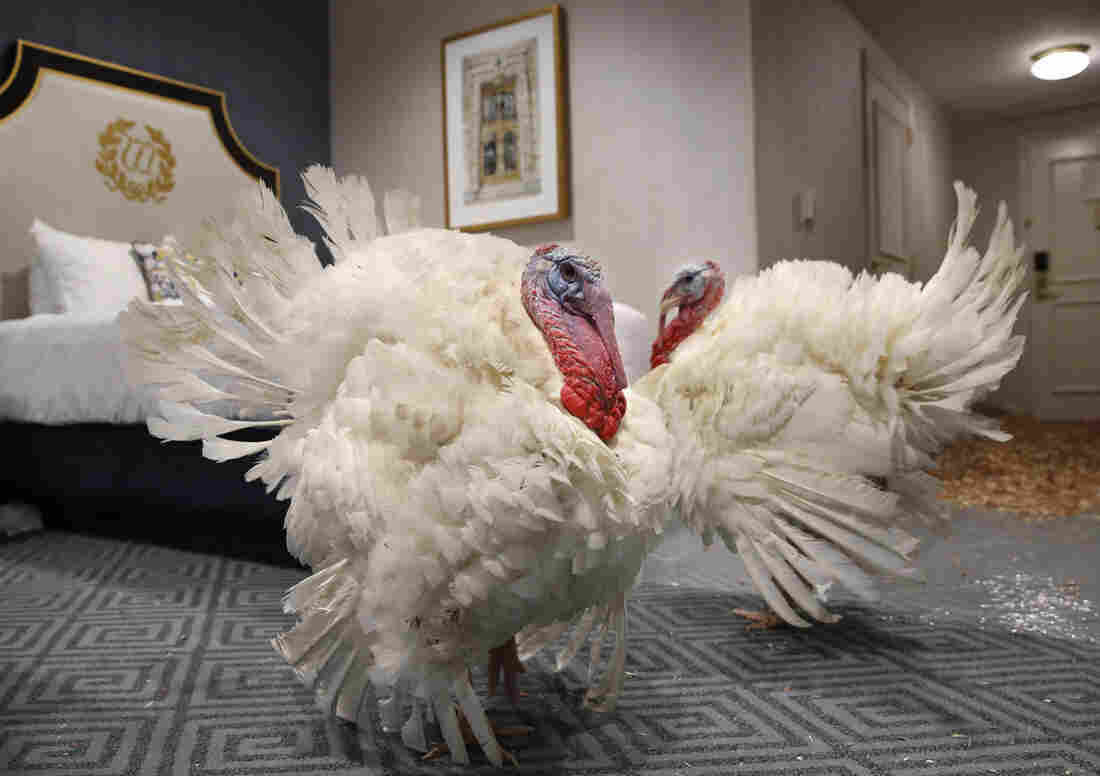 Peas and Carrots get comfortable in their room at the Willard InterContinental Hotel after their arrival in Washington. Jacquelyn Martin/AP hide caption 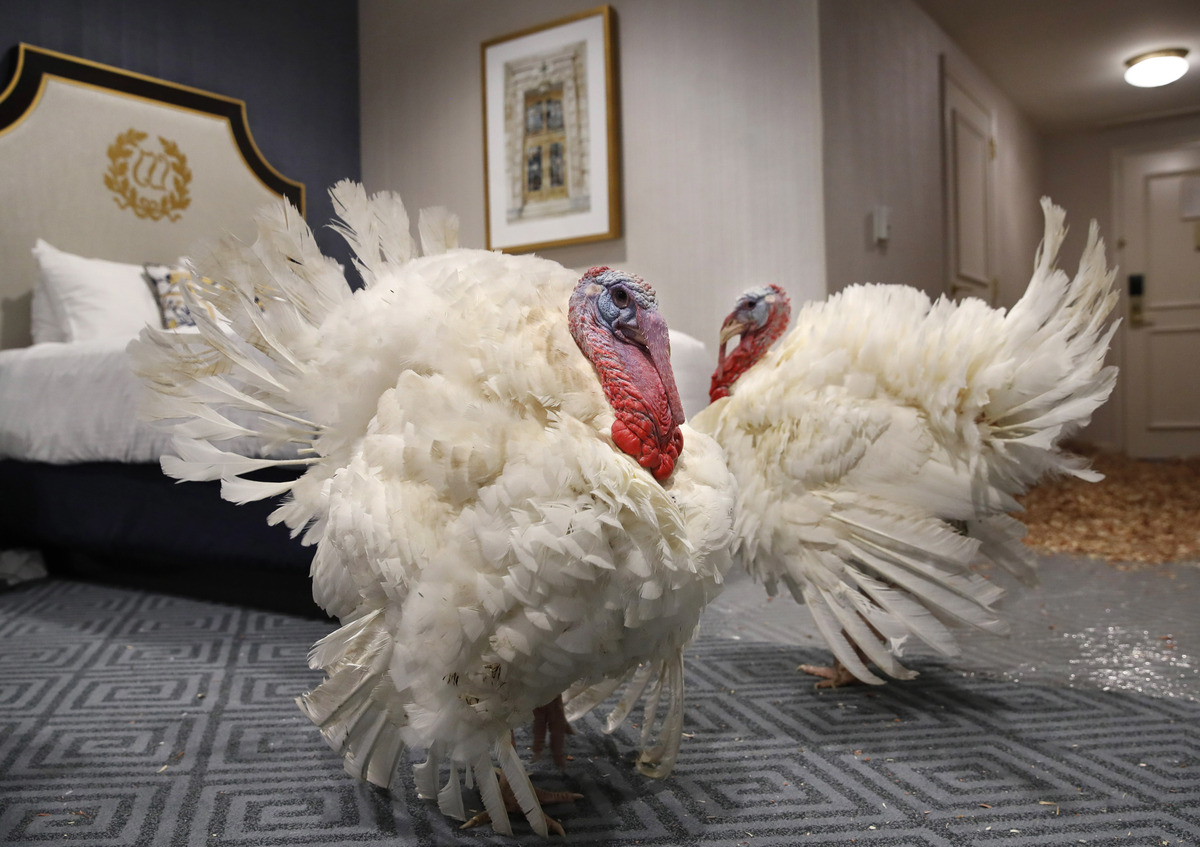 Peas and Carrots get comfortable in their room at the Willard InterContinental Hotel after their arrival in Washington.

The tradition has confused even some presidents. "President Truman was the first president to pardon a turkey," President Bill Clinton incorrectly declared in 1997.

In fact, the story of the event's roots was more accurately told by none other than President Trump in 2017 (perhaps after this author has dug up the truth and posted it year after year.)

"It was 70 years ago that the National Turkey Federation first presented the National Thanksgiving Turkey to President Harry Truman — who, I might add, did not grant the pardon," Trump said. "He refused. He was a tough cookie. Today, I'm going to be a much nicer president."

Well, Truman never "refused"; it wasn't even a consideration. The birds presented to presidents by Big Turkey were always intended for the dinner table — and to keep turkey front and center for American dinner tables for Thanksgiving.

And even though 1947 was the first time the turkey lobby presented a turkey at the White House, turkey growers have been shipping turkeys to the White House since 1873.

"Poultry King" Horace Vose was the unofficial White House turkey provider until his death in 1913. Until 1947, it was a free-for-all. The White House Historical Association explains:

"By 1914, the opportunity to give a turkey to a President was open to everyone, and poultry gifts were frequently touched with patriotism, partisanship, and glee. In 1921, an American Legion post furnished bunting for the crate of a gobbler en route from Mississippi to Washington, while a Harding Girls Club in Chicago outfitted a turkey as a flying ace, complete with goggles. First Lady Grace Coolidge accepted a turkey from a Vermont Girl Scout in 1925. The turkey gifts had become established as a national symbol of good cheer."

It wasn't until 1963, when President John F. Kennedy took one look at the bird presented to him and declared, "We'll just let this one grow." As photographic proof of just how clearly these birds had been intended to be eaten, there was a foolproof sign around the bird's neck that read, "GOOD EATING, MR. PRESIDENT!" 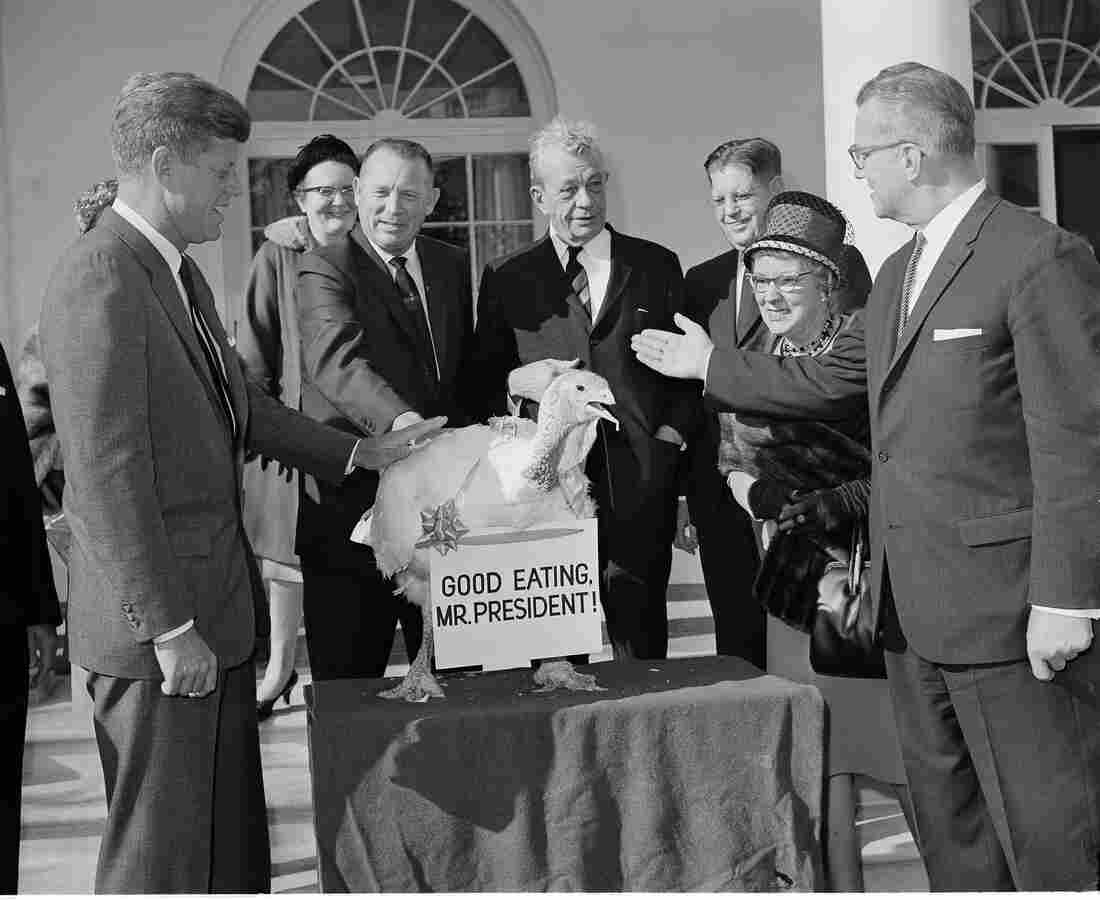 President John F. Kennedy reaches out to touch a turkey presented to him in 1963 at the White House. It is the first known reprieve for a Thanksgiving turkey by a president. Harvey Georges/AP hide caption 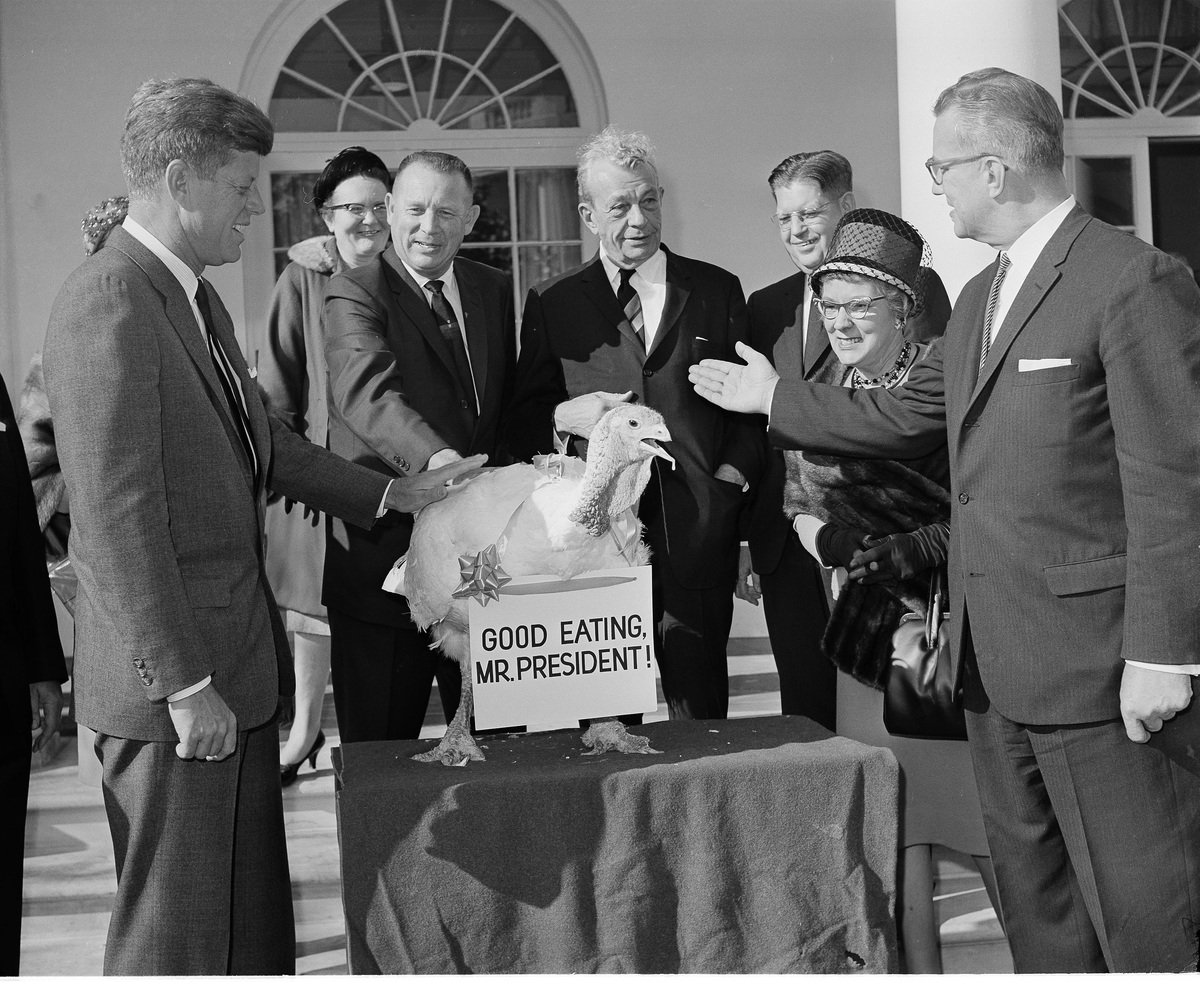 President John F. Kennedy reaches out to touch a turkey presented to him in 1963 at the White House. It is the first known reprieve for a Thanksgiving turkey by a president.

So, Kennedy was the first to officially give a Thanksgiving turkey a reprieve. (All evidence suggests that President Abraham Lincoln was the first to pardon a Christmas turkey presented to him.) President Richard Nixon also sent a turkey to a petting zoo. And that's something Reagan continued in the 1980s until Bush turned the tradition into the kind of event Americans have come to expect now.

Not everyone likes the event. For one thing, there's the dark history of what happens after the pomp and circumstance. The fairy tale (or is it "tail"?) goes that the birds live happily ever after on a farm. Peas and Carrots will retire to Gobblers Rest at Virginia Tech, "where students and veterinarians care for the turkeys, and the public can visit and learn about the university's teaching, research, and outreach programs in animal and poultry sciences and veterinary medicine," the White House notes.

But the animals traditionally have not lived very long after the ceremony, because they are bred to be eaten.

"When no 'pardoned' turkey has lived more than a few years, 'sparing' a physically distorted, genetically engineered, soon-to-be-lame bird who's likely on the brink of heart failure is fake news," PETA, or People for the Ethical Treatment of Animals, President Ingrid Newkirk said in a statement. "If the White House truly wanted to save a turkey's life, there would be a Tofurky roast on the president's table instead of a bird's corpse. Humans who disregard the beauty, intelligence, and wonder of a turkey and see him or her as a centerpiece rather than a feeling individual, are the ones who should seek to be pardoned for their shortsightedness."

Well, Tofurky might not be right for everyone, but it's an option. Others simply believe the tradition should go back to its roots — where the president accepts and eats the birds. It might highlight for Americans the disconnect between what they eat and where it comes from.