Accessibility links
DOJ, Asked About Census Confidentiality, Crafted Intentionally Vague Answer An internal email reveals a Justice Department discussion about the possibility of "renewed debate" over whether the Patriot Act could force the release of individuals' confidential census responses. 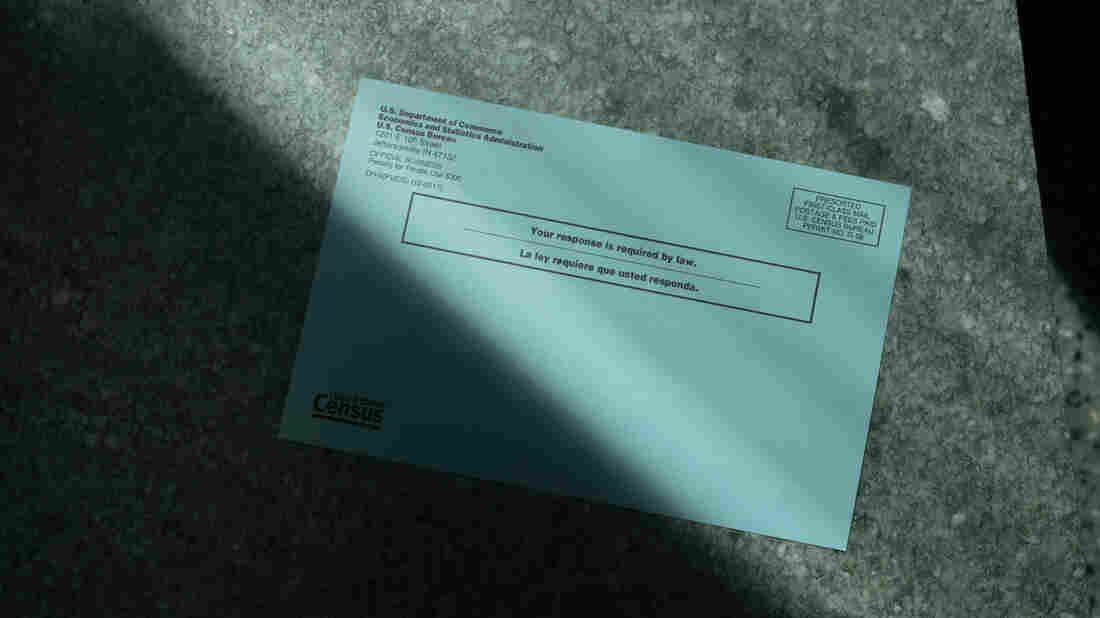 A postcard from the U.S. Census Bureau reminds recipients that responding to the census is required by law. Claire Harbage/NPR hide caption 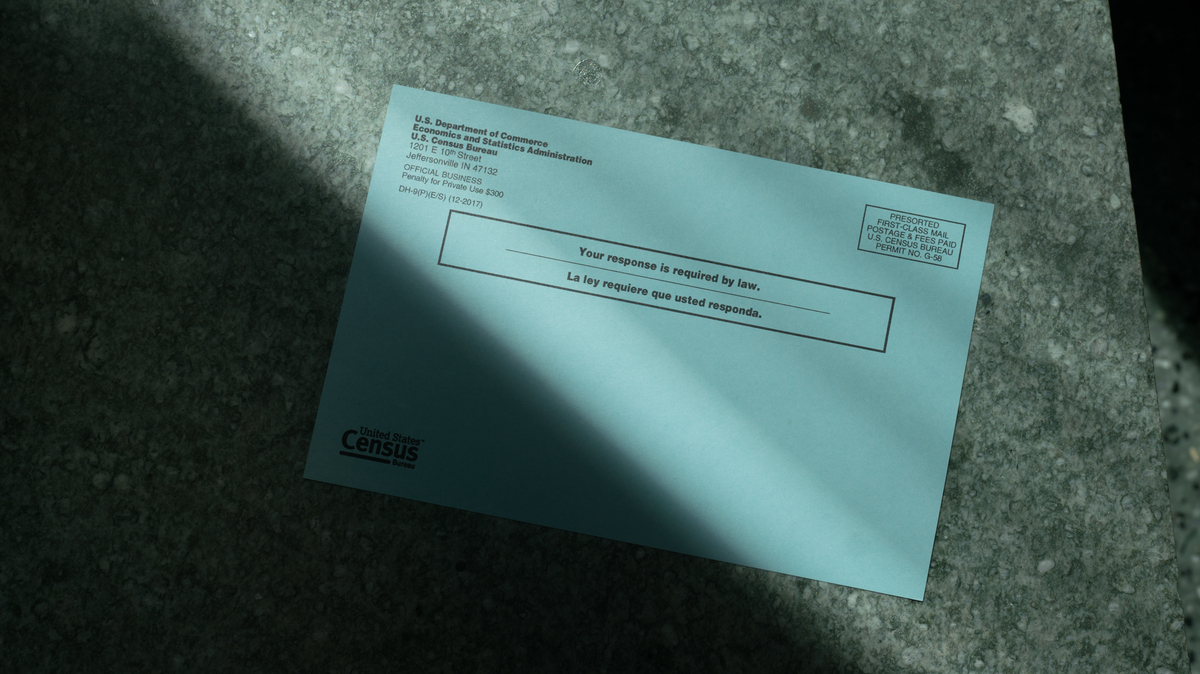 A postcard from the U.S. Census Bureau reminds recipients that responding to the census is required by law.

The Justice Department has discussed the possibility that federal law protecting the confidentiality of responses to the U.S. census may eventually be reconsidered, an internal Trump administration email shows.

The email, first reported by NPR on Nov. 17, was submitted last Friday to the U.S. District Court in the Northern District of California in a court filing by Andrew Case, an attorney with Manatt, Phelps & Phillips. The law firm, along with the Lawyers' Committee for Civil Rights Under Law and Public Counsel, is representing the plaintiffs in one of the six lawsuits over the citizenship question the Trump administration added to the 2020 census.

Last week, the Supreme Court decided to weigh in on the legal battle, and the justices are set to hear arguments over an evidence dispute in February.

"I don't think we want to say too much"

The confidentiality of census information came up after Rep. Jimmy Gomez — a Democrat from California who serves on the House Committee on Oversight and Government Reform — asked a follow-up question after the acting head of the Justice Department's Civil Rights Division, John Gore, appeared at a congressional hearing in May. Gomez requested a written response on whether there are any laws that could compel the Census Bureau "to disclose confidential census data for law enforcement or national security purposes."

The lawmaker also asked if the Justice Department under the Trump administration agrees with the OLC opinion issued by the Obama administration. That 2010 memo addressed how the Patriot Act, enacted after the Sept. 11 terrorist attacks, could impact Census Act protections. Those protections prohibit the commerce secretary, who oversees the Census Bureau, from releasing census information identifying individuals for non-statistical purposes or outside of the Commerce Department, including the bureau.

"We have identified no provisions of the PATRIOT Act that would compel the Secretary to disclose such protected information," former Deputy Assistant Attorney General Jeannie Rhee wrote in the opinion.

In the June 12 email, former Justice Department attorney Ben Aguiñaga — who was serving as Gore's chief of staff at the time — referred to a draft response to Gomez's question. Aguiñaga told his "boss" that the response "does not directly address the question."

"I don't think we want to say too much there in case the issues addressed in the OLC opinion or related issues come up later for renewed debate," Aguiñaga wrote.

The response Gore ultimately submitted on behalf of the Justice Department said: "No one should have to fear responding to the census questionnaire or to a citizenship question, if in fact it is included. To that end, the Department is committed to abiding by all laws protecting the confidentiality and nondisclosure of such responses."

"All kinds of ways that issue could arise again"

In an email, spokesperson Kelly Laco said the Justice Department declined to comment on NPR's questions about Aguiñaga's email, including whether the department still agrees with the 2010 memo and if the issues addressed in the memo have come up for discussion under the Trump administration. The department also did not comment on whether there are any laws that could force the Census Bureau to release information for law enforcement or national security purposes.

Aguiñaga, who has left the Justice Department and currently serves as a law clerk to Supreme Court Justice Samuel Alito, has not responded to requests for comment. A spokesperson for the Supreme Court, Kathy Arberg, confirmed in an email that Aguiñaga "is recused and has not worked on" the case regarding the citizenship question currently before the court "or on matters relating to it."

In October, Gore was asked about Aguiñaga's email during his deposition for the citizenship question lawsuits.

"I think it's routine for the Department of Justice not to overcommit on particular legal questions that it may need to revisit in light of new facts or legal understanding," Gore testified under oath.

Gore also rejected any suggestion that Aguiñaga's email was describing anything the Trump administration would do. Renewed debate about census confidentiality, he said, "wouldn't necessarily have to be during this administration."

"Is it your understanding that this administration will not reconsider the view that the Patriot Act does not compel disclosure of otherwise confidential census information?" ACLU attorney Dale Ho, who is helping to represent plaintiffs in the New York-based lawsuits, asked Gore.

Pressed by Ho, Gore later testified that he was "not aware" of any deliberations or conversations "occurring right now" about changing the department position that the Obama administration established on census confidentiality and the Patriot Act.

The Census Bureau and the Commerce Department have emphasized that the agencies are committed to protecting the information the bureau collects from the public. Federal law requires every household in the country to submit responses once a decade for the constitutionally-required head count of every person living in the U.S.

While the bureau can release information to the public about specific demographic groups at a level as detailed as a neighborhood, it is illegal under federal law for the Census Bureau to share census information identifying individuals until 72 years after the bureau collects it.

Citizenship Question May Be 'Major Barrier' To 2020 Census Participation

"Title 13 [of the U.S. Code] makes it very clear that the data we collect can only be used for statistical purposes and cannot be shared for nonstatistical purposes — including law enforcement," the bureau's acting director, Ron Jarmin, wrote in a blog post in May.

Attorneys for plaintiffs in one of the California-based citizenship question lawsuits — the city of San Jose, Calif., and the Black Alliance for Just Immigration (BAJI) — however, cite the Justice Department email as evidence that supports their clients' fears about how the federal government could use census responses.

"Despite public statements that the Bureau and Commerce will continue to respect the privacy of citizenship answers, DOJ has admitted in private the providing census answers to other agencies ... may 'come up later for renewed debate,' " the plaintiffs' attorneys wrote in a court filing. "Such statements confirm that BAJI's members' privacy concerns are well-founded."

"There is no debate"

Many civil rights groups and immigrant advocates have expressed concerns about the Justice Department email. They fear that the email's revelations could further discourage households with unauthorized immigrants and other noncitizens — many of whom were already wary of the new citizenship question — from participating in the upcoming national head count.

"There is no debate about whether to keep census information protected — census confidentiality is protected by law," said Vanita Gupta in a written statement. Gupta is the president and CEO of The Leadership Conference on Civil and Human Rights and a former acting head of the DOJ's Civil Rights Division under President Obama. "The Justice Department's failure to confirm that guarantee is cause for great alarm," she added.

Gomez and other Democratic lawmakers, including Rep. Elijah Cummings of Maryland and Rep. Carolyn Maloney of New York, are preparing to launch more investigations into the Trump administration's discussions about the 2020 census, including the new citizenship question.

"These emails prove that the Trump administration is using every tool at their disposal to vilify our immigrant communities, including the 2020 census," Gomez said in a statement. "The new Democratic House majority will do everything in our power to directly address these anti-immigrant efforts."