Accessibility links
Migrants Forced Off Ship After They Refused To Return To Libya Migrants rescued in the Mediterranean Sea refused to return to Libya, saying they'd been tortured. After more than a week, Libyan coast guards boarded the ship and put the migrants in detention.

Migrants Forced Off Ship After They Refused To Return To Libya

Migrants Forced Off Ship After They Refused To Return To Libya 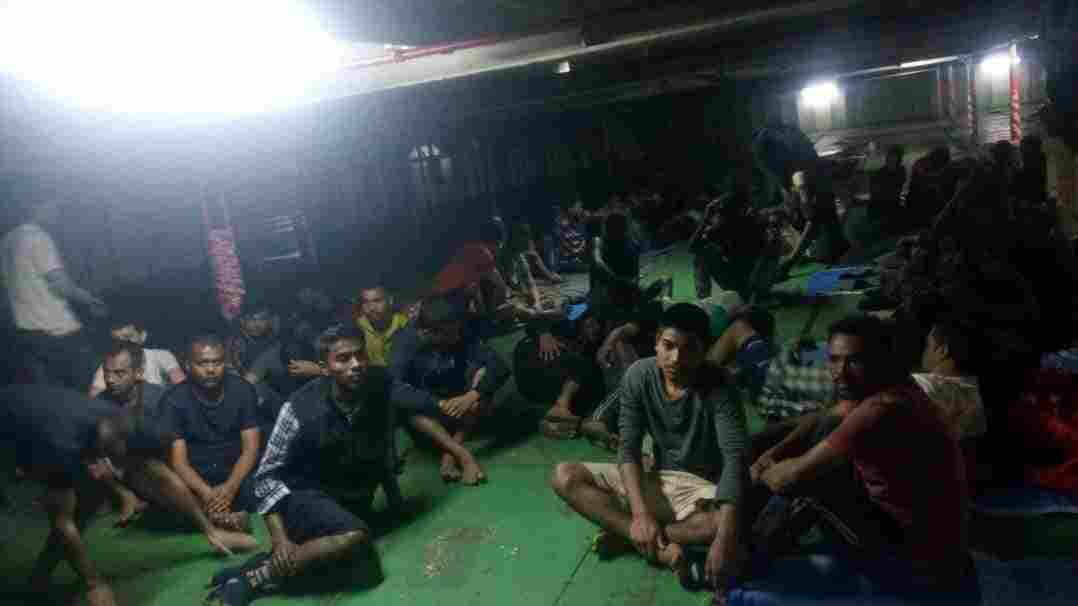 A photo provided Nov. 14 shows migrants on board the container ship Nivin, which rescued more than 90 migrants from a raft in the Mediterranean more than a week ago. Many of those migrants refused to disembark in Libya; they were forcibly removed from the ship on Tuesday. AP hide caption 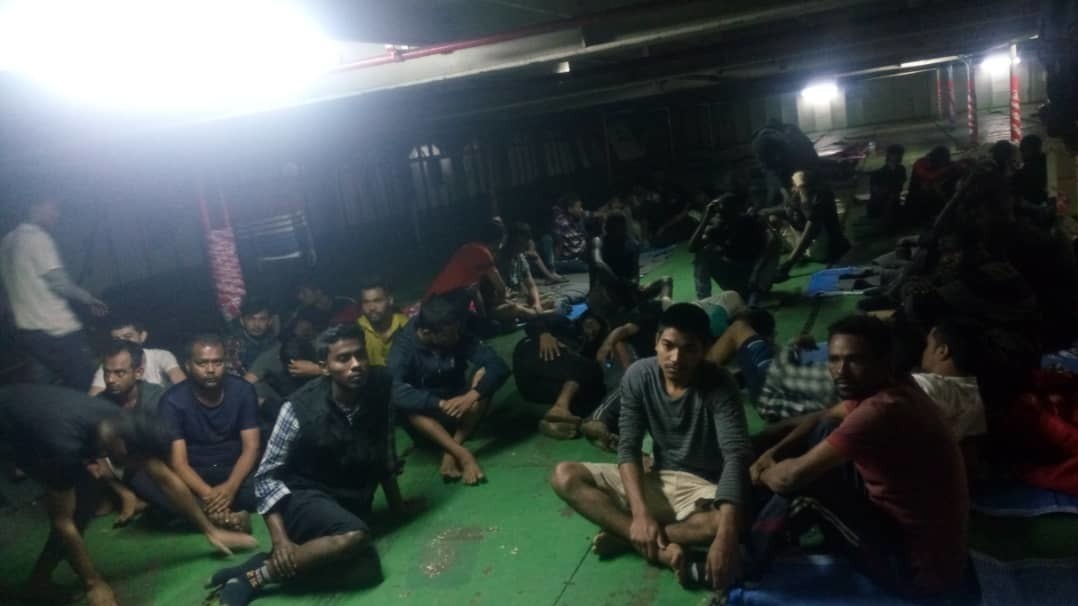 A photo provided Nov. 14 shows migrants on board the container ship Nivin, which rescued more than 90 migrants from a raft in the Mediterranean more than a week ago. Many of those migrants refused to disembark in Libya; they were forcibly removed from the ship on Tuesday.

The Libyan coast guard forcibly removed more than 70 migrants from a ship that had rescued them after the migrants refused to disembark, saying they had been imprisoned and tortured in Libya before and feared going back.

The migrants have now been placed in Libyan detention centers, which are notorious for human rights abuses including torture and slavery. Several migrants were reportedly injured in the forced removal and have been hospitalized.

The migrants attempted to cross the Mediterranean in a rubber boat more than a week ago, and were picked up by a cargo ship that brought them to Libya, docking in the port city of Misrata.

Amnesty International said last week that the ship's return to Libya "appears to be a clear breach of international law, given that Libya cannot be considered a safe place to disembark."

Fourteen of the rescued migrants, including some children, agreed to leave the boat and enter Libyan detention centers. But the rest remained on board, describing concerns for their safety in Libya.

"I would rather die on the cargo ship," one migrant told a Doctors Without Borders team last week.

The unusual standoff lasted more than a week before the Libyan coast guard boarded the ship, called the Nivin, on Tuesday.

Both France 24 and Reuters —citing the port authority and the regional coast guard, respectively— have confirmed that the ship had been boarded and that tear gas and rubber bullets were used to force migrants off the ship.

Multiple people were injured in the process, both news outlets report.

In a statement, the U.N.'s humanitarian coordinator for Libya, Maria Ribeiro, said the "humanitarian community is saddened by the turn of events."

"Refugees and migrants on board included Ethiopian, Eritrean, South Sudanese, Pakistani, Bangladeshi and Somali nationals," she wrote. "Their reluctance to leave the relative safety of the ship that rescued them from peril at sea is an understandable human reaction. ... It is regrettable that mediation efforts undertaken did not lead to a peaceful resolution."

Last week, while the migrants refused to leave the Nivin, teams from Doctors without Borders conducted 60 medical consultations. They mostly found injuries related to burns from fuel spills during their attempted crossing. The group's head of mission in Libya, Julien Raickman, said those teams also "witnessed the despair aboard."

"Among the group, there are people, including minors, who have been held captive and tortured for a year or more by traffickers to obtain money," she wrote.

"It's an utter shame that once again the only response given to people in search of safety is prolonged arbitrary detention in the country they desperately attempt to leave," Raickman said.

The United Nations has repeatedly denounced the treatment of migrants in Libyan detention centers.

In 2016, a UN report found that migrants in Libya "are subjected to arbitrary detention, torture, other ill-treatment, unlawful killings, sexual exploitation, and a host of other human rights abuses."

In 2017, human rights monitors visited detention centers in Tripoli and witnessed "thousands of emaciated and traumatized men, women and children piled on top of each other, locked up in hangars with no access to the most basic necessities," UN human rights chief Zeid Ra'ad Al Hussein said. Men, women and children said they were beaten by guards, while women said they were raped.

Migrants told NPR's Ruth Sherlock and Lama al-Arian that the official detention centers function as slave markets, with one Gambian man calling the center where he was held the "prison where they sell people."

And outside of those detention centers, migrants also face threats from militias, criminal gangs and smuggling networks.

A man named Mohammed, from Niger, said he paid smugglers to take him across North Africa into Europe, but he was imprisoned by a militia, held for ransom and sold to a man who used him as a farm laborer. Sherlock and al-Arian report:

" 'And when he was down...' his voice trails off. He later describes being beaten, and given only scraps of food to eat.

"One time, he says, he built up the courage to ask the farmer for payment for his work. 'I asked how he was OK with not giving me what was rightfully mine,' he says. The farmer's answer was to pull out a gun and shoot, narrowly missing him."

Mohammed eventually escaped. He said his mistake was coming to Libya in the first place.

Migrants Captured In Libya Say They End Up Sold As Slaves

Al Jazeera spoke to multiple migrants on board the cargo ship Nivin before the forced removal. One said his brother was killed by people smugglers in Libya; another said he saw detainees shot to death at an official detention center, during an escape.

Two migrants said the crew on the cargo ship that saved them, said they would be going to Malta — but then headed to Libya instead.

Humanitarian rescue ships have traditionally taken rescued migrants to Europe — but that's grown more difficult as more European ports have closed off access to migrant rescue vessels. And the small fleet of lifesaving vessels dwindled this summer, before vanishing completely.

The last privately operating rescue ship, the Aquarius, is not currently operating, after Panama revoked its registration; the Italian government has also demanded the seizure of the vessel, alleging that humanitarian groups engaged in illegal dumping.

In the absence of humanitarian missions, many migrants are rescued by Libyan patrol boats, which by policy take migrants to Libya.

Others are picked up by commercial ships, like the Nivin. And this is not the first time a commercial ship has taken migrants to Libya in what appears to be a violation of international law.

Amnesty International has said that Europe is complicit in the abuse of migrants in Libya, for policies seeking to block migrants from accessing Europe — which mean people reach Libya and find themselves trapped.

Italy, in particular, has provided support to the Libyan authorities in the interest of intercepting more migrants.

Thousands of migrants die attempting to cross the Mediterranean each year. Tens of thousands are currently in detention in Libyan facilities.